“A wing that will go in my apocalypse survival kit!”

Back in March, having just arrived back in Interlaken after a successful winter season in Colombia, as the pandemic was expanding, I got a package: the Ozone Zeolite GT. This new two-liner is based on the Zeolite, Ozone’s 2019 Red Bull X-Alps wing, but made with sturdier materials. The promise is a great compromise of performance, weight and user-friendliness.

It was late but I rushed to the mountain. Opening the glider for the first time I instantly noticed Ozone’s new G-string lines on all the cell openings, which help keep a clean shape on the leading edge. There are only 64 cells, far fewer than the Zeno (78) and the Enzo 3 (101); 36g cloth is used on the leading edge and 40g for the internal structure instead of the Zeolite’s 27g, contributing to a weight of just 3.72kg for the MS Size (80-95 kg).

Once ready to launch, the katabatic wind kicked in giving me the perfect opportunity to try the X-Alps pedigree of the Zeolite GT. With an energetic run and no special technique I was up in the air: no drama. Once in the smooth evening air I had to rush down, enjoying the playful nature of the wing before dusk. Sadly the next day lockdown meant all my local sites shut down and I had to put away the wing for a while.

By mid-April we were allowed to spread our wings again so I chose the legendary site of Grindelwald-First (2,167m) to test the wing in real life Alpine conditions. I launched with a moderate crosswind into a thermal that took me above 3,000m.

My first impression was that it felt a little lively, but I think it was more the fact I was flying for the first time in four weeks right into spring thermals. As I got settled, I got to use its intuitive nature to find lift and core thermals. Braking to turn is light, progressive and precise, with no tendency to dive, and requires no wrap. It’s definitely a weapon for tricky lift.

On glide, just like any other two-liner, the Zeolite GT likes to be handled with the rear risers which are light yet responsive. The solidity is insane, as long as you are paying attention, and it is really good at converting lift when gliding through turbulent air. Glide at speed is comparable to other certified two-liner EN Ds, which is impressive considering the Zeolite has such a moderate aspect ratio (6.7) and low cell count for its category, but its top speed is pegged down a little. 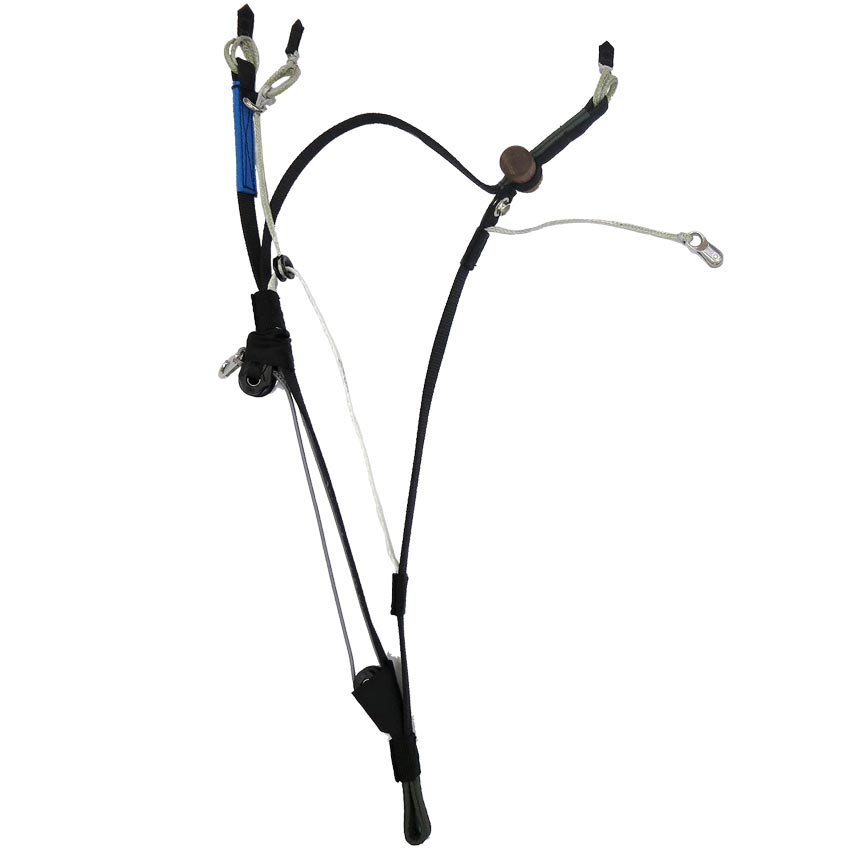 Simplicity is the hardest thing to achieve: the riser set

The Zeolite GT is the easiest two-liner I have ever launched. The sail doesn’t need to be laid out neatly: as long as a couple of cells are facing into wind it’s enough. It comes up quickly but does not shoot, and its nature is to stay above you even in the lightest wind.

For strong wind the wing comes up energetically. However, somehow the energy is easy to manage as the glider’s tendency is to stay up; any shooting is easy to correct by braking.

Trying to land in tight spots is made easier by predictable parachutal behaviour, allowing the pilot to pump down the glider with confidence. This feature will certainly be appreciated by vol-biv adventurers and hike-and-fly competitors.

The Zeolite does a very good job of keeping you informed of turbulence through the risers as well as the brake lines, and as long as you react to it accordingly, the glider should stay open most of the time. In the 35 hours that I flew it I only had one minor tip collapse. A glider’s true nature shows up when collapses happen and it’s up to the pilot to be ready when taking that step up to two-liners. Even though the Zeolite behaves mostly like an EN-C wing, pilots should not become complacent when flying these wonderful machines.

The Zeolite is the most balanced wing I’ve flown in terms of performance, safety, weight and fun. It’s a glider that will appeal to the vol-biv expert, the XC hound, the hike-and-fly racer and those moving up from three-liners.

It’s a wing that will stay strong in turbulence but also sniff out the climbs on the weak days. A wing with which I don’t mind enduring a hike up to take-off, knowing that the reward will be a proper flight. As I said at the start, it’s a wing that will go in my apocalypse survival kit.

Seb Ospina is an XC, competition and professional tandem pilot. He divides his time and seasons between the Cauca Valley in Colombia and Interlaken in the Swiss Alps