When the original XXLite hit the market back in 2012 it was a revolutionary design: the first commercial single-skin paraglider. The wing didn’t just create a buzz, it created a whole new type of wing, with other manufacturers soon producing their own versions.

Several of those manufacturers added a few traditional cells spaced across the wing. These were to improve handling, especially when it came to flaring and landing. As well as solo wings, several brands have also developed tandem single-skin wings.

Six years on from the original, Ozone have released an update to their groundbreaking XXLite. Their solution to the sensitive handling and performance issue of the original is an inflated spar across the leading edge of the wing. I was excited to find out what difference this made in flight. 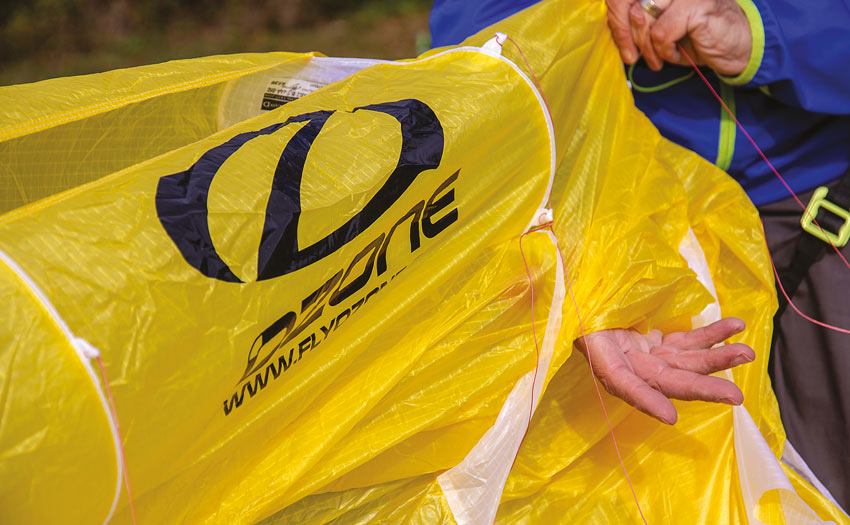 The make-up of the leading edge, open at the back so the air can flow through. Photo: Charlie King

When we tested the original XXLite my wife Charlie and I both shared the 16m2 version. The new version has two different weight ranges, 16 and 18. I took the 18m2 (67kg to 105kg), flying it with two different harnesses at an all-up weight of 87kg and then 95kg.

Unrolling the wing the most obvious immediate difference is the tube that runs across the span. On the front you will find normal cell openings with sharknose inlets. These are shaped by using thin nylon wires similar to the original.

The tube isn’t sealed, it’s not like a kite-surfing kite: the back is open so the air can vent across the bottom surface. Inevitably it will be compared to the Apco Hybrid, but on closer look they are quite different designs with the Hybrid using a double surface over a bigger proportion of the chord.

The tube isn’t the only change to the design. The planform is quite different, with very square-looking tips and an increase in aspect ratio from 5.4 to 5.6. To me it looks quite kite-inspired.

Across the span there are five wider ‘cells’. These billow more and I would expect they help keep the structure of the wing. There is more plastic towards the back of the glider, with reasonably long nylon wires sewn into the seams to support the area around the C, D and E-tabs. Yes, there are that many line attachments: on some parts of the wing there are nine tabs across the chord. This may compromise packed size a bit, but it’s still a tiny wing. 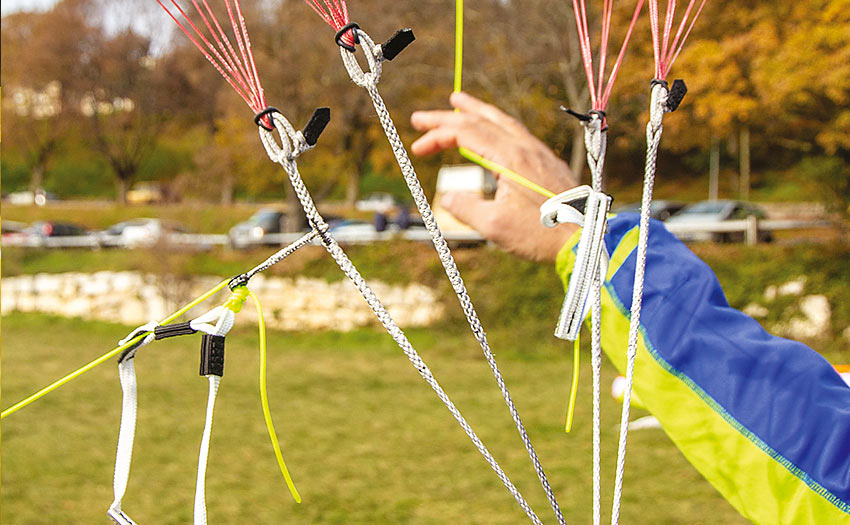 The risers are much the same as the original: there are just two simple risers in dyneema with softlinks attaching to unsheathed lines. There are no poppers to secure the brake handles, just a loop with Velcro that you can wrap around the rear riser.

The brake line runs through a ceramic ring. Brake handles are simple with no padding at all. There is also a fairly short, simple speed-system that pulls down the A-risers; again ceramic rings are used in place of pulleys.

I hiked to the top of my local mountain through early snow. On launch we were greeted with a perfect, light, upslope wind. As expected, the wing came up very easily in the slight breeze.

On a launch with catchy plants and rocks I found you could tease it up the first bit so you could see it was all off the deck, then apply a little more pressure and it would jump above you. There was no real tendency to overshoot and it was easy to control above you. What surprised me was how quickly I felt it lifting me off the hill once I committed to the run.

In the air the original XXLite was quite an active wing and moved around a lot, which, although not a big deal once you got used to it, could be a bit disconcerting. The update has changed this considerably.

It seems particularly stable in pitch. Whereas the old one would jump forward all the time this one sits securely overhead. There is still quite a bit of ‘chatter’ on the brakes but you can quickly learn to filter this out and only react to the important information.

Overall the XXLite 2 is all much easier on the brainpower than its predecessor. In strong stuff I imagine it will still take a bit of attention, but for hike-and-fly with light thermals it’s great.

Another noticeable improvement is glide and trim speed. While the XXLite original was a bit on the slow side, the XXLite 2 is faster and has a better glide: I could almost keep up with Charlie, who was flying a standard double-surface mountain wing.

Despite the early hour, the sun hitting the cold limestone cliffs quickly started to create some weak thermals. I was able to make the most of these thanks to the glider’s nimble handling. Keeping in close and flicking the glider round I was able to maintain my height, despite the comparatively small size of the wing. I found the wing gives a good feel for the lift through the brakes without overwhelming you, so you can map the lift and follow the drift easily.

Gliding out to land, the wing feels like it deals with turbulence much better than the original, with no huge deterioration in glide when you fly through lumps. It’s not at the level of an equivalent double-surface wing but to me it seems much closer than early single-skin wings.

With no wind in the landing field I came in fast, letting the wing fly to the ground with no brakes, then gave a good flare and arrived on terra firma with a step. This is a big improvement over the original, which needed a few alert running steps to land in nil-wind. 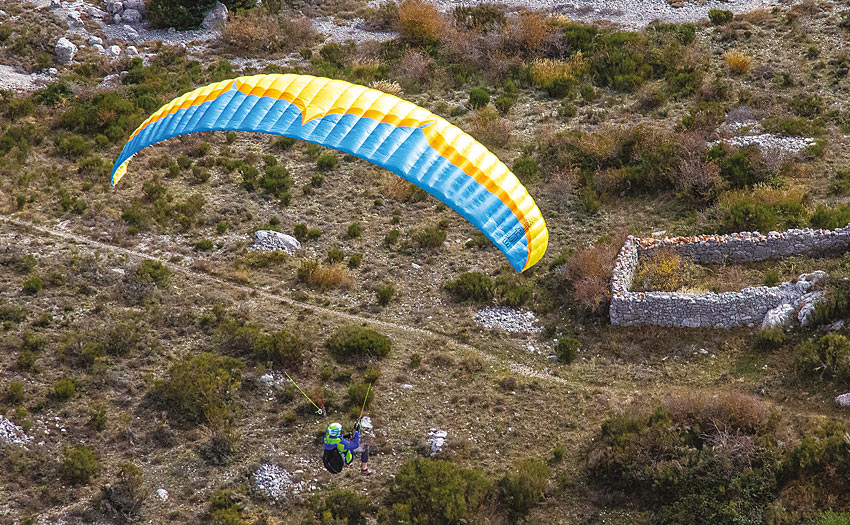 The next morning, with a forecast for light northerlies (not ideal for our south-facing site), I took a punt at walking up. A package this light means you can take it on a walk on the off-chance; the water I was carrying weighed nearly as much as the wing.

Arriving at one of the unofficial take-offs I found there was no wind, so got ready for a forward launch. As I eased forward with tension on the A-risers the wing rose quickly above me, required only the slightest of touches to dampen it as it reached its zenith, then I was lifted off.

Again, I was impressed by the lift on take-off and felt like I was in the air as quickly as I would be on our Ultralight 19. This makes it great for short take-offs. As I flew past the normal launch the wind station was clearly indicating a downslope flow, reinforcing how well the wing had coped.

Coming in to land the windsocks were still pointing down the hill. I came in from an unusual direction, flying back at the hill and up the slope. Coming in fast I left the flare until the moment just before my feet touched down. Again, the resource was great and I came to a gentle halt without the need for any running.

I went back up the hill in the middle of the day, this time using a standard seatplate harness with reserve. I wanted to see how the wing behaved in thermals.

Conditions were looking stable as I hiked up, and when I arrived at the main launch there was very little breeze. I decided to walk further up the mountain to find a take-off closer to an area that produces more consistent lift. Launching from a space amongst the bushes just above the cliffs, again the wing showed its good launch behaviour, despite the inevitable cliff-top rotor and catchy plants.

Gliding out I found a thermal and turned. The wing gave good information about the lift through the brakes. I found it best to let the wing keep its speed. Slowing it up too much made it wallowy and inefficient, but flying fast with only a bit of inner brake and some weightshift had it turning smoothly without banking up too much.

Like this it was efficient and I started to climb in the weak lift. I was flying at an all-up weight of 95kg and the wing felt noticeably faster.

The sight of this lightweight wing climbing was obviously the sign all the other pilots were waiting for and they came to join me in the air. But conditions were still stable and even the full-size wings struggled to climb, with none of us getting any higher.

Flying out I tried big ears: they are reasonably easy to pull but are a bit flappy. Pulling on the A-risers you can feel a lot of tension in the leading edge: it’s no surprise that Ozone had to use folding lines to collapse the wing for the certification tests.

I had enough height for a few wingovers. It’s not super energetic but will bank over nicely. Like the previous XXLite, when you stop the inputs it comes back overhead very quickly.

This is of course a specialist piece of kit, weighing in at only 1.3kg for the 16m2 and 1.4kg for the 18m2. As Ozone say, it’s a mountain wing for serious hike-and-fly pilots and alpinists rather than for everyday use.

However, the changes made have opened up this wing to a much wider range of pilots. The reactions and movements of the original meant that it was really only for experienced pilots who were prepared to cope with its talkative nature. The new XXLite 2 is a much more mellow wing to fly, meaning more pilots will feel happy flying it.

That plus better performance and landing characteristics make it much more usable and accessible than the original XXLite, even in thermic conditions.

Marcus King – Marcus reguarly reviews EN-B and EN-C wings. Cross Country’s designer, he has  been flying paragliders for 25 years. He lives in the south of France near the sites of Gréolières and Gourdon. He flew the XXLite 2 with a Gin Yeti reversible harness and Icaro Larus at between 90 and 98kg.