The Ozone Speedster 3 is built mainly for PPG touring but it can also be used for free flight Photo: Gareth Bird
Paramotoring, Reviews

This jack-of-all-trades paramotor wing is perfect for pilots who know how to fly and want to go places. Handling is good, there’s lots of control throughout the speed range, and it’s easy to launch and land.

Back in 2011 when Ozone released the original Speedster it was promoted as the all-new full reflex paramotor wing with BBHPP/R10 technology, speed, safety and handling. I logged around 100 hours on the Speedster across three sizes, 19m, 24m and 26m. I flew in a variety of ways including free flying in stronger wind, thermal flying and classic nil-wind evenings with the motor. So I feel I know the Speedster well, and I was really keen to try this third iteration in the series.

So how has the Speedster 3 changed when compared with the 1 and 2? Well, it’s still pitched predominantly as a long-distance XC wing for intermediate to advanced pilots, as the previous generations were. However, this one has all the latest knowledge and technology from the high-performance paragliding wings in Ozone’s armoury. 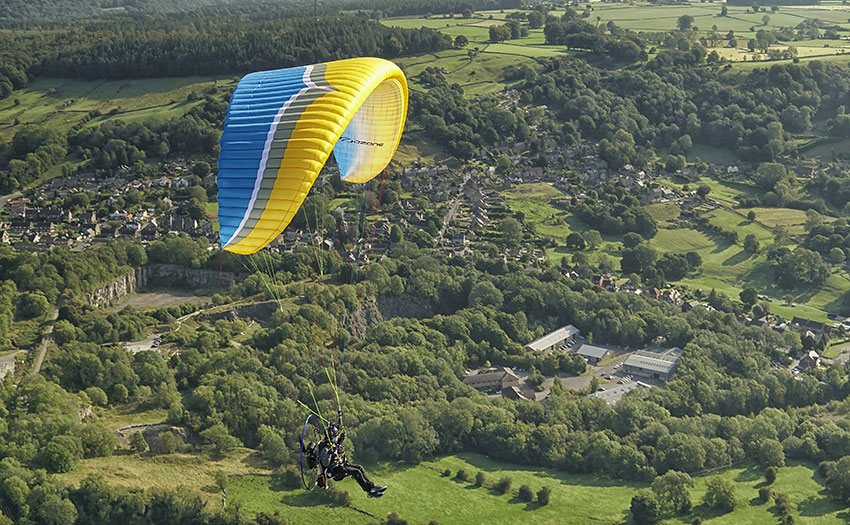 If you come to the Speedster 3 from the Speedster 1 or 2 everything will feel familiar but with new technology and improved performance. Built mainly for PPG touring and XC the glider can also be used for free flight. Photo: Gareth Bird

In terms of raw specs, the Speedster 3 is similar to the Speedster 2 with a key difference being two additional cells. To keep the same weight at around 5kg (22m) Ozone have used lighter Porcher Skytex 9018 E65 material on the bottom surface instead of Dominico 30D MF, which both the 1 and 2 used.

Those coming from either the Speedster 1 or 2 will be happy to see that the riser layout and line colours remain similar, and both the brakes and tip-steering controls use strong magnets to locate themselves on the risers. I like this strong magnet design as the brakes are easy to stow and stay in place. I know some other manufacturers opt for a plastic-popper/magnet-style combination and they are just not as easy to stow.

The glider has a long trim range (21cm), which means a good portion of the speed range is accessible for those long cruising flights. The speed bar has a fairly typical Ozone set-up using Ronstan 20mm micro-pullies, with a range of 17cm.

By factory default the tip-steering line comes to a separate point on the riser with a separate handle. However, Ozone offer the ability to adjust this to suit pilot requirements. I found that connecting the tip-steer to the main brake gave me the best control at different speeds as you can have independent control of tip, central brake or a combination of both for best handling. I decided not to use the included tube and balls on the tip-steer line as I prefer a simple configuration. 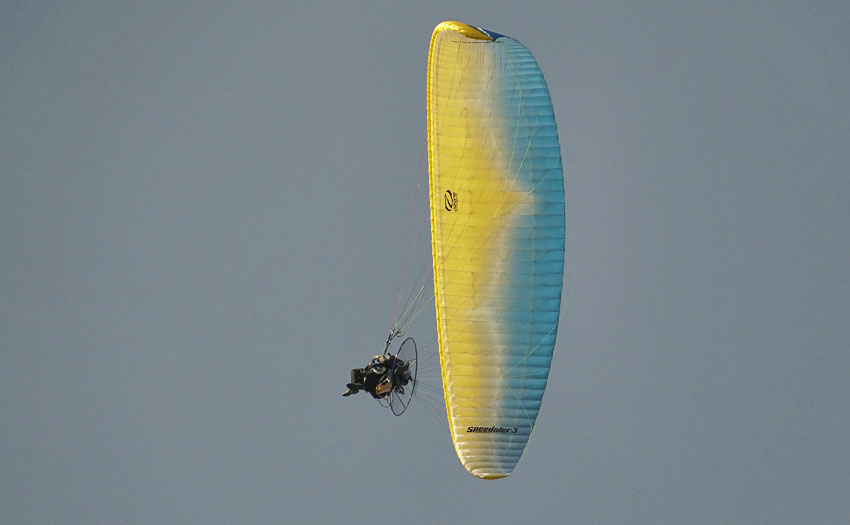 The Speedster 3 uses Ozone’s Sharknose technology with plastic reinforcing rods on each cell. This is helped by additional half-way plastic rods between cells for further stiffening of the leading edge at high air speeds.

At the centre of the wing the plastic rods extend from the leading edge to around 40cm into the chord. I like the fact that these are not full chordwise plastic as it makes packing a lot easier and means you don’t have to be quite as careful.

The wing does not have mini-ribs at the trailing edge, which I was a little surprised at. However, it does have those additional two cells when compared with the Speedster 2, which should help efficiency as you get a cleaner profile. 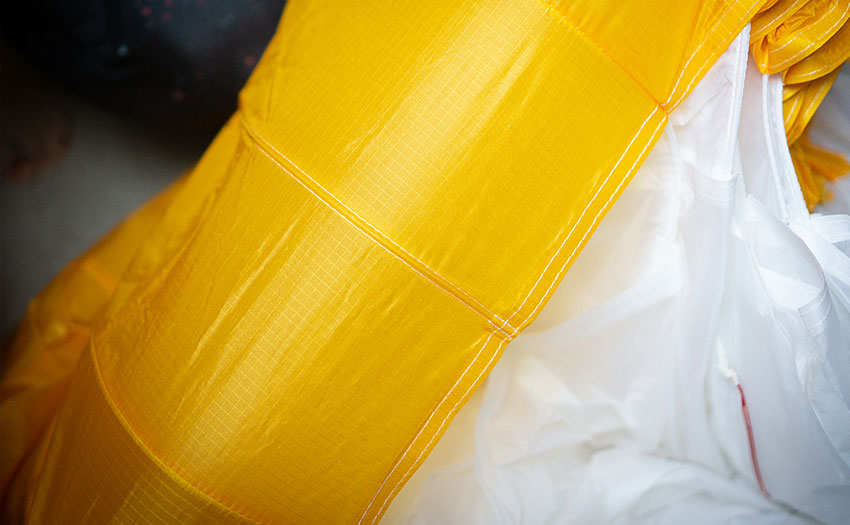 Plastic rods extend around 40cm along the chord, helping to keep the profile clean

During testing the winds ranged from 0-12km/h so I managed to get a good feel for different conditions. Throughout the ‘Take-off zone’ as marked on the trimmers the glider launched effortlessly. However, I found that with my motor/weight combination I tended toward trimmers at the top-end of the take-off zone (for both nil-wind and a breeze). If I had a lower power-to-weight ratio then I would probably have done the opposite and trimmed to the lower side of the take-off trim-range to help get off the ground even sooner.

Once airborne, and with the glider fully loaded, I noticed the increased sensation of speed straightaway. It reminded me of flying smaller, more heavily-loaded paramotor wings, which put a smile on my face.

The brakes in the factory setting (just the usual central brake-fan, no tip-steer connected) had a reasonable amount of travel in the slower trim-settings and gave a moderate level of pressure and authority on the wing and I felt this was only slightly better than the original Speedster and the Speedster 2. However, connecting the tip-steer to the main brake-line made the wing feel a lot more playful and agile. It reminded me of flying the Ozone Viper or Freeride competition wings, as if the line plan changed the arc of the glider and therefore gave different handling with more roll, which I love.

Normally you have one or the other: either a glider which is dulled down (stable) on the roll axis; or one with more progressive arc (less flattening) which therefore has that playful feeling. So I was really happy to see Ozone have nailed this on the Speedster 3.

Throughout all speed ranges I was really pleased to see that there was next to no roll oscillation when cruising, which meant cross-country flying hands-off was super comfortable and hassle free. This was also the same when purposely trying to initiate roll oscillations with changing power settings. Very nice! 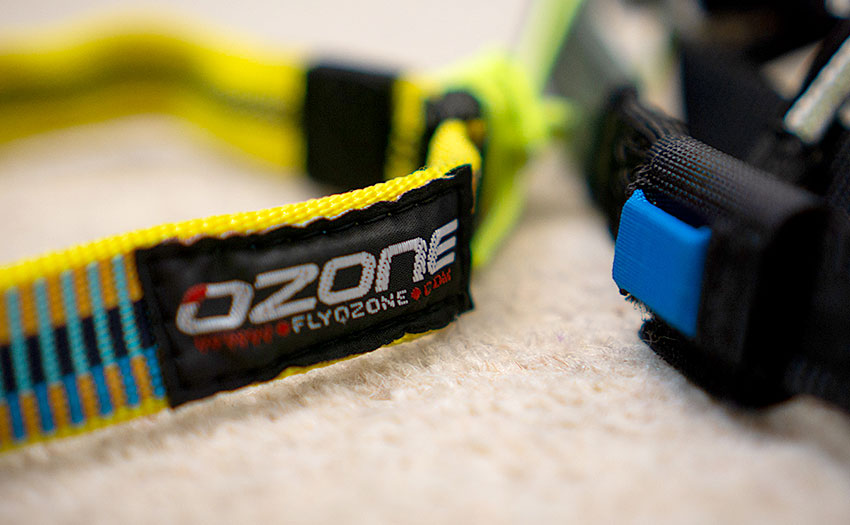 Brakes are held in place by strong magnets

How fast does it go?

Right, speed. What you’re reading this article for right? I used the following testing methodology for working out calculated airspeeds. First, I would take off and climb to 1,000ft AMSL and fly three full 360s by locking my arms to a set point on the risers to keep them as uniform as possible. This way XC Track could calculate the wind speed as accurately as possible.

I would then fly between two turnpoints spaced 2km apart four times (at each trim setting). At each turnpoint I’d complete three more full 360s to keep wind speed updated. This way XCTrack could accurately determine airspeed between these two points. On analysis I could average the speed for each of the trim settings. This is what I found to the closest km/h:

So both trimmers and bar give 12km/h increase in speed.

There are two main factors (in our control) that affect a glider’s airspeed: wing loading and glider size. I was not at the top of the glider’s paramotor weight range and therefore would be able to go faster with additional loading. Plus, generally speaking, bigger gliders of the same type generally have better speed ranges.

With this in mind I was really impressed given the glider size and my loading. All of the speed runs were also tested during mid-day thermic conditions (circa +2m/s climbs around) and therefore not only gave me a speed reading but a good understanding of how the glider felt whilst in typical cross-country type weather.

The glider gave good pitch feedback when trimmed fully fast and tended to pitch back when entering strong lift but not aggressively pitch forward when leaving strong lift. This gave me confidence to keep trims open.

One thing I did find was when trimmed fast I found myself constantly climbing. It never needed as much power as I thought it would. It certainly feels more efficient than the previous generations. 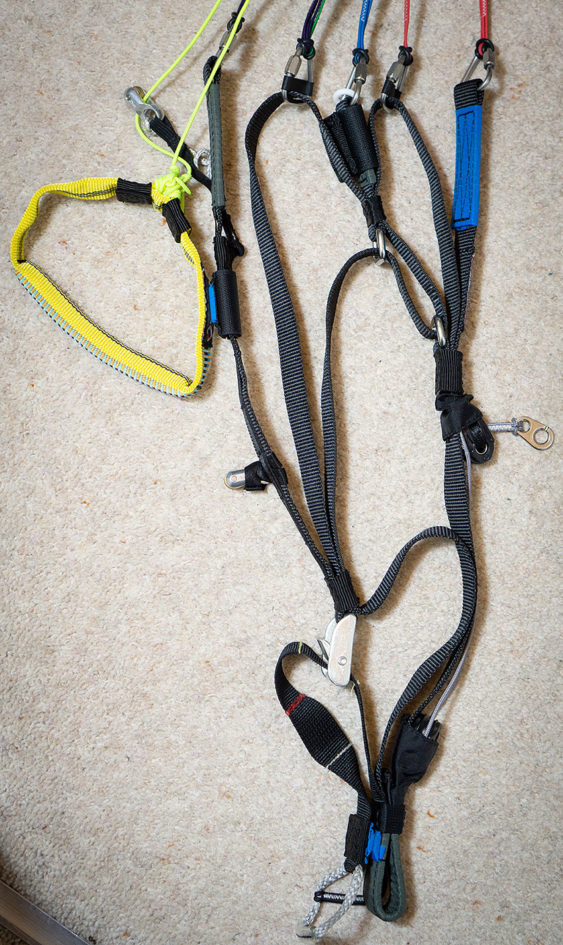 The riser set with trimmers

My first few thermals were strong +5m/s with peaks of +7m/s. During these strong climbs the glider moved as one and felt strong in its profile. With my variable mid-hangpoints it meant weightshift / brake combinations worked well.

At the bottom of one of the big climbs I turned the engine off at around 200m and popped the throttle in my lap to give me an even better feel for the wing. With one half-loop through the brakes the glider needed a little active flying in and out of the strong stuff, but slightly less than most C-class gliders I have flown.

After topping out at 1,100m I realised I had left the glider at the top of the take-off speed range, so was quite a way from being at minimum sink – yet it still climbed efficiently. This was good to know: I could have increased my climbing efficiency further by trimming-in if I had wanted to.

In terms of fuel efficiency, I achieved between 4.0l to 4.5l per hour when trimmed fully fast. For me, the important figure is the fuel efficiency at speed over trim speed. Given drag is proportional to the square of airspeed this is where you will see more differences between gliders in terms of profile/line layout changes and therefore efficiency.

This means for me, trimmed fully fast with the standard 10-litre Maverick tank, 115-130km of autonomy in nil-wind should be easily achievable. That will cover most people’s flying needs. Of course, this figure could change significantly depending on vertical air movement and motor/wing loading combination.

Landing is a non-event. Personally, I prefer to come in with speed and make a gradual flare (more like an aircraft landing). However, if this is too fast for you, you can simply trim-in, which makes it even more manageable in terms of sink rate and airspeed.

Because of its efficiency it’s actually really fun trimming to top of take-off speed range as you can get pretty long swoops for the size of glider. It is here you really notice the efficiency as you glide on for some time! 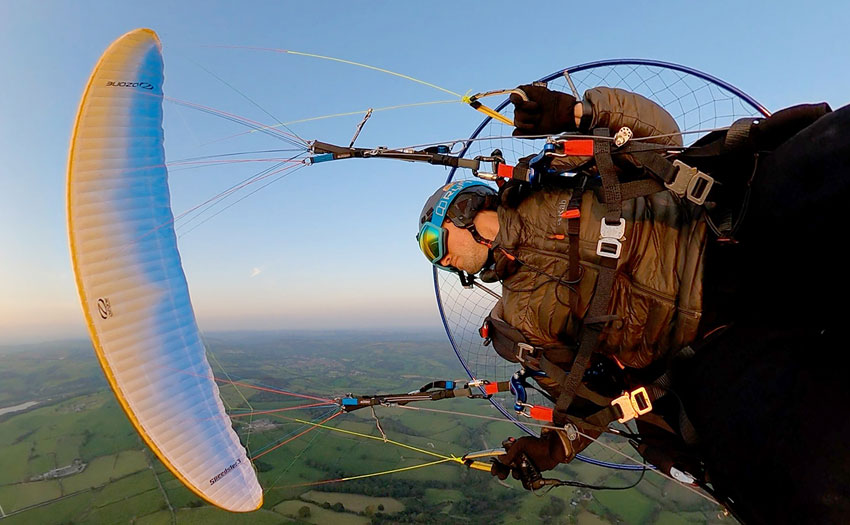 Connecting the tip-steer to the main brake-line makes the wing feel more playful and agile. “When you want to be a hooligan, the handling is there.” Photo: Lawrie Noctor

I can only liken this glider to something like an Audi RS6: fast, stable, sleek and with lots of control throughout the speed range. When you want to be a hooligan, the handling is there.

For someone stepping up from something like the Ozone Roadster 3 everything will be very familiar, but size-for-size you will now have considerably more speed.

This is a jack-of-all-trades wing which is not just ok, but brilliant in pretty much every type of flying, from cross country to the more playful type. If, like most people, you only have the budget for one wing and want a good performing all-rounder, this would be a really good choice.

For the review Lawrie flew the Speedster 3 22m with a Parajet Maverick/Moster flying at 112kg (≈ 6l of fuel) all up, giving him a loading of 5.09kg/m²