That range will include everyone from those looking to progress in  cross-country flying and start to make distance, to those who want a tool for carving out 200km triangles in the Alps on big days in spring when it gets rowdy, cold and dark at base. 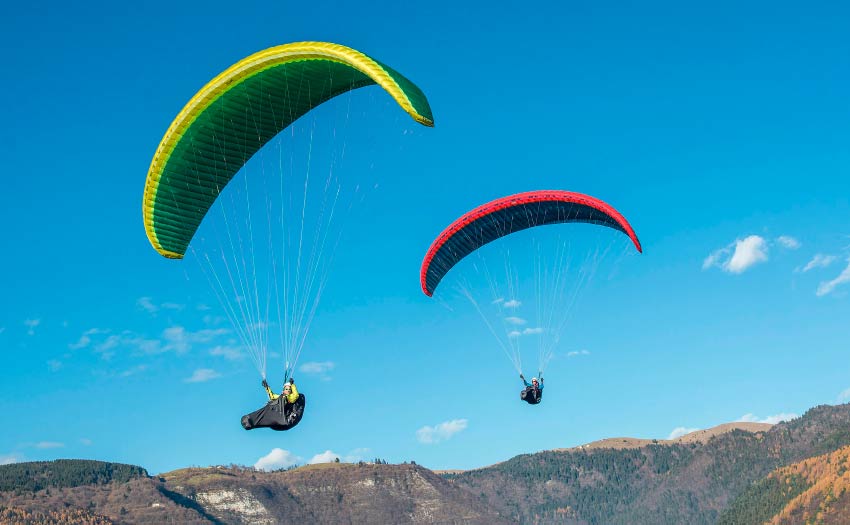 The Mentor 6 is made for cross-country flying in the mountains, where security in strong air is as important as performance. Nova’s Speedbrake riser system comes fitted as standard – this allows rear-riser steering without creating a drag-inducing crease between the B-line and C-line area.

Note immediately that the Mentor 6 / 6 Light are not aimed at beginner pilots – look elsewhere for your first EN B or wing out of school. In Nova’s case, it would be the Ion 5 or the Ion 5 Light.

Clearly, Nova’s ongoing ambition to top the EN-B class with the Mentor is well-founded. The EN-B category is the most popular category in paragliding, with roughly 60% of pilots flying EN B.

A scroll through the Standard class on the hotly contested XContest.org online XC league reveals more than 9,000 pilots in the category worldwide. Austria’s Christoph Feichtl this year proved what the Mentor 6 is capable of in the hands of an expert pilot. Flying his Mentor 6 he came third in the Standard category in the just-finished 2019 XContest, flying six FAI triangles of between 212km-259km.

He was 22nd overall, out of nearly 15,000 pilots. Those are 10-hour flights, flown at speed on bar, through full-on spring and summer Alpine conditions. You get the idea.

Indeed, if you don’t fly enough to warrant flying a higher-level wing, or simply choose to trade a bit of performance for the wraparound security of the EN-B class, and you can fly XC and avoid comparing yourself to a field of EN Ds or two-liners, then this may well be the ideal wing.

You’ll find yourself with plenty of time to look around and really focus on the flying, absorbing everything that is going on in the sky around you. You will maybe even have time to take in the view.

Both the Mentor 6 and 6 Light fit comfortably within the EN-B category, with a flat aspect ratio of 5.43 and 59 cells.

David “Gandhi” Newns, who has been paragliding since 1987 and has flown every Mentor except the very first, and I flew the gliders in the S size (80-100kg), with both of us in the middle of the weight range.

The full-fat Mentor 6 weighs 5.05kg, with the Light coming in at 4.2kg – largely thanks to the weight-optimised Skytex 27 cloth used for both the upper and lower surfaces. The lighter cloth reportedly stands up to UV damage well, but is a consideration if you are regularly using the wing on rough, sandy or stony ground. Not everybody launches from astroturf or grassy hills.

Both wings come with a host of up-to-the-minute technical innovations. Zig-zag 3D panel shaping – visible on the top surface – creates a neater line and smoother profile along the nose of the glider, while additional vector tape reduces creasing along the trailing edge when braking.

In flight, the glider has a beautifully tidy and streamlined profile and its smooth lines quickly became a talking point on our hill. The smoothness is surely good news for drag and more performance.

Out of the bag, the Mentor, in both of its incarnations, is an exceptionally well-made wing. Both are easy to launch in a range of conditions, although the Light is more eager to fly and, in strong wind, requires a little extra handling to prevent over-shooting. In light or nil-wind mountain conditions, this would be a welcome advantage.

The riser set-up is intuitive, clearly colour-coded and easy to read on both gliders. It is also built to allow rear-riser control when on speed on glide. Typically, using rear-riser control on a three-line wing can in fact degrade performance, as the glider creases along the span between the B and C-line areas. Nova’s answer to this is to make the B-line area shorten as well when a pilot applies pressure to the C-riser.

This, says Nova, means there is no “performance-limiting crease” between the B-line and C-line areas. The result is rear-riser control is to be encouraged – you can push bar, steer with the rear risers, and be confident you are doing the right thing.

The newly-developed, ergonomic brake handles are comfortable and well-crafted, although one did slip out of my hand during groundhandling and the handle material can be a bit slippery against a leather glove.

At the end of the flight, the relatively small ribs make it easy to pack down small in a hurry. 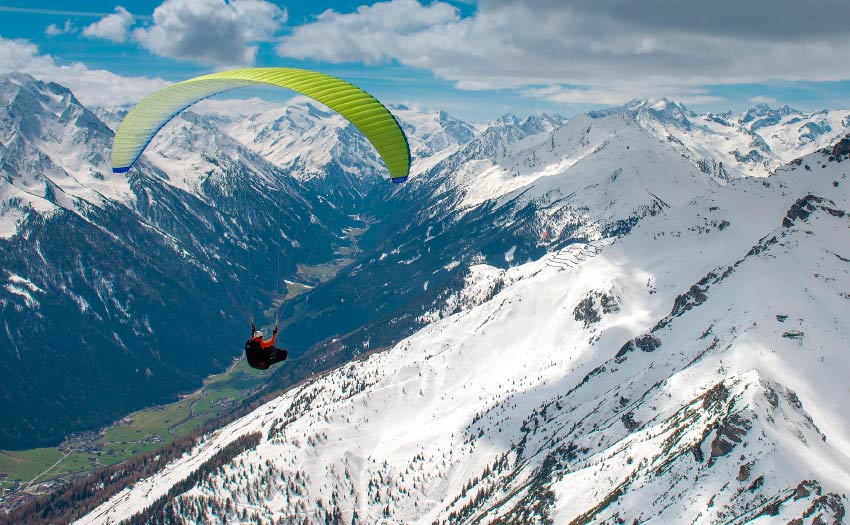 We flew both wings over 10 hours in the flatlands of southern England. The late summer and early autumn conditions ranged from gentle soaring to rock-and-roll thermalling to cloudbase – and we had no trouble getting to the top of the stack. From the first flight, it was clear that the Mentor is an impressive wing in the air.

Gandhi said: “I’d normally fly nearer to the top of the weight range, but I loved the stability and care-free flying both wings offer. They’re great on the ground and in the sky.”

He added: “They turn sweetly and flat, even though I was in the middle of the weight range, and climb well. There’s nice brake pressure and there are no surprises. They’re damn good wings for strong days.”

To prove his point, on one windy and ragged day out he first launched on his own EN-D two-liner, but quickly found conditions not to his liking. He flew down and switched wings to the Mentor, which he flew for the rest of the afternoon.

There are some differences between the two wings. According to Nova’s designer Philipp Medicus, the glide performance is “identical from my perspective”, but the feel of the glider “differs a bit”. The reason is the lightweight fabric used in the Mentor Light itself. “Even the fact that the light fabric is making a different sound while launching and flying compared to the normal fabric might change the experience of the pilot,” Philipp says.

Theoretically, this means the Mentor Light requires a little more active piloting. Philipp adds: “The reduced mass of the glider leads to quicker motion of the wing. Practically, however, the difference is quite small. But you can hear small deformations of the light cloth better than the same deformation of the heavy cloth. That might amplify the impression of a livelier glider.”

I slightly preferred that increased feedback the Mentor 6 Light offered over the standard Mentor 6. But both wings provide a hugely reassuring level of passive safety and this, coupled with the gliders’ impressive and useable performance, is key.

By making you feel secure in flight, even in the roughest conditions, the Mentor frees up that all-important mental bandwidth and allows you to exploit the wing’s considerable full potential. As already mentioned, it’s not for beginner pilots, but it strikes perfectly the balance between security and pizazz in the EN-B range. Some pilots who like their gliders full of energy and excitement may find it a bit damped, but for others that feeling of added security will be exactly what they are looking for.

In the turn, brake pressure is relatively light, but precise. Initially, I found the Mentor Light had more of a tendency to dive into the turn, but this was soon corrected and put down to over-piloting after stepping onto it from a different wing. Both wings climbed as well as anything else in the thermal.

Both are extremely pitch stable and recover quickly from any deflations. On the Mentor Light, David experienced a real-world 40% asymmetric in rough air and the glider recovered immediately and effortlessly without any change in heading. It’s always reassuring to experience a glider’s behavior in a real, rather than test, environment. The Mentor Light passed with flying colours.

While both gliders are exceptional climbing machines, they also allow you to push on. Performance is impressive at full speed, offering plenty of forward poke without driving you straight to the ground. The speed system also features Ronstan ball bearing pulleys, which allow a smoother, less effortful transition to top speed.

On glide and pushing out from the hill the Mentor 6 held its own against the crowd. Certainly, it allows you to be ambitious and adventurous; to sniff for thermals when others may be worrying about bombing out.

Big ears are easily deployed and come out seamlessly, without sticking.

Your brain is your most formidable flying instrument, and the Mentor 6 and Mentor 6 Light will allow you to use it at full capacity. Secure and reassuring – with loads of performance in the tank – this is a wing that could take you all the way from evening floater to XC legend.

There are always moments when you want more speed, more glide, but a pilot flying at 100% will always fly their best flight. This wing will enable a huge number of pilots to get to that level – and to do it with a feeling of safety, comfort and control.