Naviter introduced the latest version of their Oudie GPS/vario at the Coupe Icare in September last year. It’s available in two versions, XC and Pro. They look the same at first glance, but switch them on and the Pro offers extra competition functions. Marcus King reports.

I reviewed the Oudie 3 back in XC153 and since then Oudies have become popular, especially among comp pilots. I have my own Oudie 4, so was keen to see what the upgrade means.

The look of the instrument is little changed since the original Oudie 3. The update to the Oudie 4 saw an improved screen added and battery life increased to up to 12 hours. In reality that means you do need to charge it every day, or at least every other day, when flying regularly. Naviter thoughtfully provide USB and car chargers in the box for this.

The screen is full colour and pretty easy to read in sunlight, depending on the angle of the sun. The only physical button is the power button on the side; the main inputs are done through the touchscreen. This works well even with gloves on.

The latest version looks the same, except for the aerial. This is the only visible sign of the latest hardware addition – and the key reason for the upgrade – which is a FLARM beacon and FANET+ module.

Taken together these mean you will be more visible to general aviation and be able to communicate with other pilots using the same system. Incidentally, the aerial is removable, something you have to do to fit it in its protective carrying case.

Pilots who already have an Oudie 4 can send their instrument to Naviter for an upgrade to the Oudie 5. It’s a shame that Naviter haven’t been able to add a WiFi module, as this would open the possibility of upgrading the instrument online, and direct uploads to online leagues etc. Currently live-tracking can only be done via the Oudie Live app running on an Android mobile connected via Bluetooth, although FANET+ does add live-tracking possibilities.

The FLARM system (FLight alARM) is all about making us electronically-visible to other aircraft for the purpose of collision avoidance. It has a working range of about 20km and is particularly useful if you fly in an area with a lot of sailplane traffic, such as in the Alps.

All sailplanes have it in Switzerland, Germany and France, and the Flarm (we’re done with all the capital letters from here on) website claims that more than 50% of general aviation air traffic, including planes and helicopters, have it in Europe (including the UK). More than 20,000 drones also use Flarm, according to flarm.com.

Flarm then does away with the need for expensive and power-hungry transponders, allows us to be seen by our fellow pilots, and goes some way to future-proofing ourselves against the rise of the drones.

FANET (Flying Ad-hoc NETwork) meanwhile is an open-source network designed to pass data between instruments over a low-power radio connection. The way the system is designed each instrument acts as a relay, so information can be passed much further by bouncing through intermediate instruments.

As well as positional data the system can be used to send messages between instruments, eg status updates. By adding ground stations into the network they can act as gateways to the internet, so you can receive up-to-date weather information, or send your position to live-tracking servers without the need for a mobile phone or satellite internet connection. 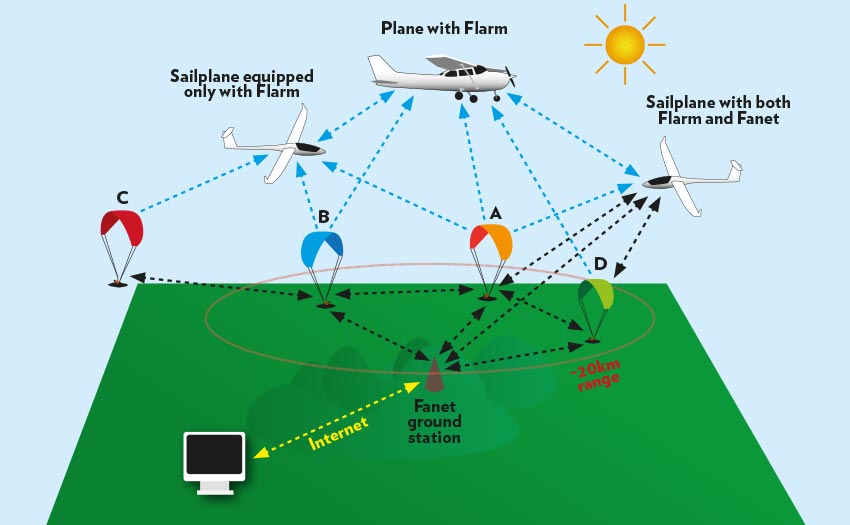 Pilots with Fanet+ transmit their information over the Flarm network (blue lines), which is received by the Flarm-equipped sailplanes and light aircraft. The paraglider pilots can also send and receive information to each other (black lines); the Fanet-equipped sailplane; and the ground station, which can also act as a relay to the internet. Even though pilot C is out of range of A, information can be sent automatically between the two by using pilot B as a relay.

The Fanet+ module used in the Oudie was developed by Skytraxx and combines Flarm and Fanet in the one module. This module only transmits on Flarm and cannot receive using the Flarm protocol, relying instead on Fanet for receiving information.

Fanet+ allows instruments equipped with the module to communicate with each other and the ground stations, regardless of the manufacturer, as well as transmit their position to general aviation.

What does this mean on the Oudie 5?

So how does this relate to what you see on the Oudie screen? Looking at the map you will see other Fanet-equipped free-flight pilots plotted on the map. It should be noted that aircraft that only have Flarm will not show up on the map.

Height and vertical speed is displayed next to each aircraft. You can select the range the radar shows targets in and also whether a track is displayed and for how long.

As well as general traffic you can set up ‘flight buddies’ by adding their Flarm ID and name to a list. You can then decide to only show your buddies on the display, which is useful if you are flying with friends and don’t want other targets cluttering your display.

At the time of writing the Oudie 5 doesn’t allow you to send messages to a buddy, although Naviter told me they have an update arriving soon that will allow sending pre-defined messages.

You can however, choose to Go-To a buddy; the system will navigate to them as long as they stay in range. This makes it easy to see where your group of flying friends are at any time.

Note that Naviter say the battery life is slightly reduced with Fanet+ enabled: they reckon you get about an hour less, but I was unable to verify this. 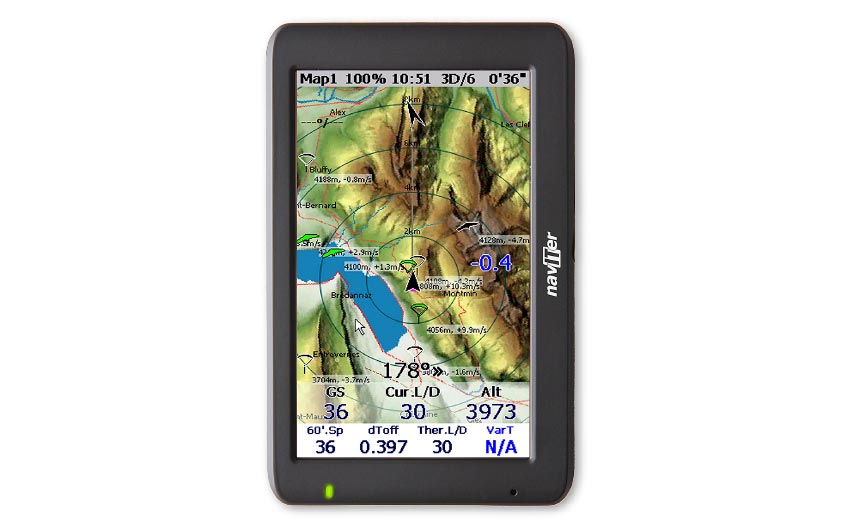 The Naviter Oudie showing the Buddy Radar information. You can see where your friends are on the instrument even when you can’t see them visually

What all this means for competition flying is yet to be seen. Knowing what other pilots  are doing up to 20km downtrack could clearly be advantageous and impact on route choice and other decision making.

In sailplane competitions, where Flarm has been mandatory for years on the grounds of collision avoidance, it has caused some issues. “Leeching” is letting the other gliders go ahead and find the lift, while watching what they are doing using Flarm. We of course use lead-out points, which is designed to stop exactly this sort of pimping.

However, expect this technology to have an impact, especially in big competitions like the FAI World Championships where pilots compete for team medals as well as individual.

It’s not just the hardware that has improved, the software has also been updated. Naviter have been working hard on the whole ecosystem that surrounds the Oudie.

The SeeYou Cloud is an important part of the platform (see XC205). You can add your Oudie to your SeeYou account allowing you to send data to and from the instrument automatically via the Naviter Updater, available for both PCs and Macs.

You can create tasks and upload them easily. You can also automatically download all flights so you can review them in SeeYou, including 3D playback.

Your SeeYou licence also allows you to upload the more detailed SeeYou maps to the Oudie. These give a lot more detail to the on screen maps and it’s suprising how much easier this makes navigation.

SeeYou can also be connected to TopMeteo or SkySight to integrate weather information into the app. Both are additional costs as they are subscription services costing about €80 a year.

I have used both and found the SkySight app to be more immediately useful, it also allows more information to be displayed on the instrument itself. As well as displaying weather data in the SeeYou dashboard and planner you will of course have access to the weather provider’s web interface and all the information that can provide.

With both services you can display forecast wind speed for the current time and location. SkySight allows you to also overlay cross-country speed, convergence and wind information.

Once set up you just need to remember to attach the unit to your computer running the updater the night before going flying and the data is automatically updated.

Should you get the Pro or the XC model?

The Oudie 5 has a more powerful main computer than the Oudie 4, so it could be worth upgrading for that alone. The XC model gives you all of the functionality we have talked about above. Where it differs from the Pro is the competition tasks.

Because while you can add waypoints and set a basic task in the XC version – useful for setting a route and goal for cross-country flying – the more complex aspects of competition flying such as speed section information are missing.

Whichever version you choose you will have a fully-featured instrument that will give you lots of information to help optimise your flying. To get the best out of either of them you will need to think about using the complete system, including SeeYou Cloud and weather integration.

If you want to fly comps or are chasing distance points in the online leagues, then the Pro is the obvious choice. If not you can buy the XC knowing that you have an upgrade path as your needs increase.