From launch we glided directly across the valley, heading towards the sunny side of the valley. The walled old city of Briançon basked in late winter sunshine, while behind me the slopes of Serre Chevalier were busy with half-term skiers.

Flying on half-bar in the sinking air I passed one of my fellow pilots, snapping pictures. There were three of us, aiming for an obvious small cliff on the forested south-facing slopes. Leading the way was Little Cloud owner and designer Tom Bourdeau,on his latest high-aspect prototype wing. I was on the Gracchio, Little Cloud’s latest XC wing.

I’d been invited to Little Cloud’s home turf to try the glider, which was released at the end of last year. The wing replaces the Goose in the Little Cloud range. “It’s a completely new wing so we decided it needed a new name,” Tom said.

As we came in close to the sunny side of the valley the vario started to beep gently. Turning in the light lift I found myself overcooking it: the wing rolls quite easily and I found I had to use a little more outside brake than I am used to, to keep it efficient. 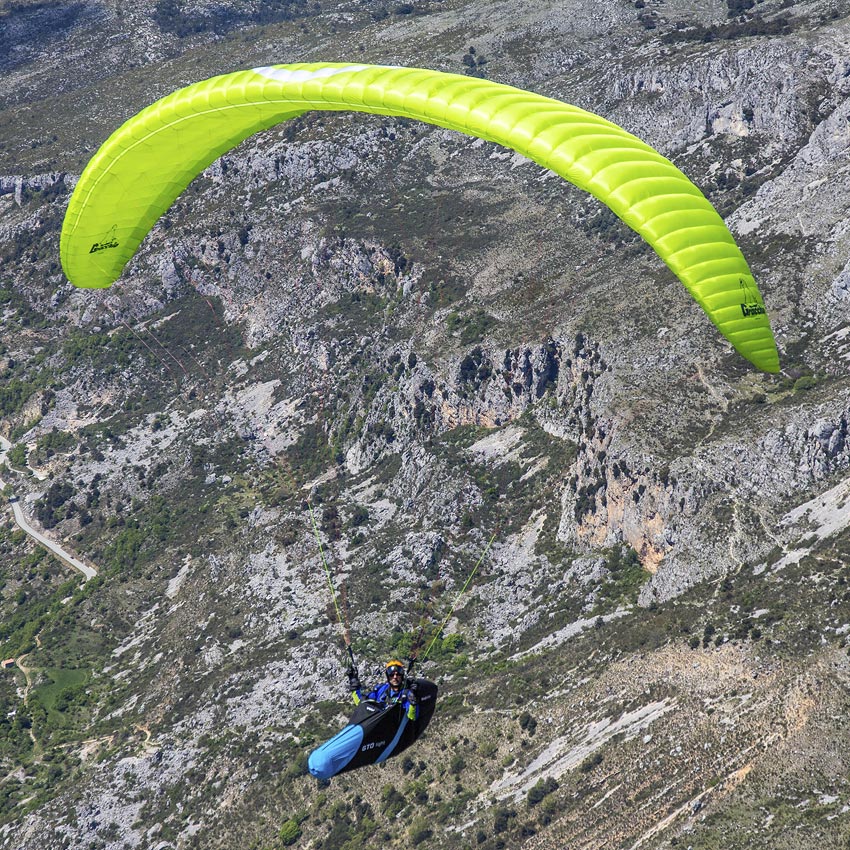 Little Cloud wings have passionate fans, and this will be no exception.
Photo: Charlie King

This behaviour is part of the Little Cloud DNA; their wings have direct handling with easy rolling and pitch stability. This is most pronounced in Little Cloud’s mini wings – they are the go-karts of the air and you can flick them over and around easily.

A strong point of the whole range is that when you pull out of steep turns the wing comes back above you very quickly and easily, with no pitching. The Gracchio shares this DNA and feels very pitch stable with obvious handling. However, if you usually fly a flatter-turning wing you will have to adjust that outside brake to get the best out of the glider.

Established in the thermal the wing sat happily at the bank angle I set and allowed me to concentrate on tracking the thermal as it drifted back on to the main mountain faces. Here the thermals were stronger and I could make the most out of the early-spring cores by letting the wing bank over a bit more. Soon we were flying amongst the summits, having a blast.

The wing felt very comfortable. There is very little movement in the sail – it’s not a chatty wing at all – but there is still plenty of information there. That information comes through the harness, less so the brakes. Those are on the heavier side, but nicely reactive to input. They have reassuringly long travel, with a good increase in pressure if you go deep on them.

Along with its shorter-than-normal lines, it all adds up to a slightly different feel to standard XC wings, but then that is the Little Cloud way. Overall, once you get into the groove, this is a very comfortable wing giving enough feel for the air without being tiring to fly.

As the shadows lengthened across the valley and the thermals faded it was time to head down. Spirals and wingovers were easy to control, the wing coming back to straight and level flight without fuss. 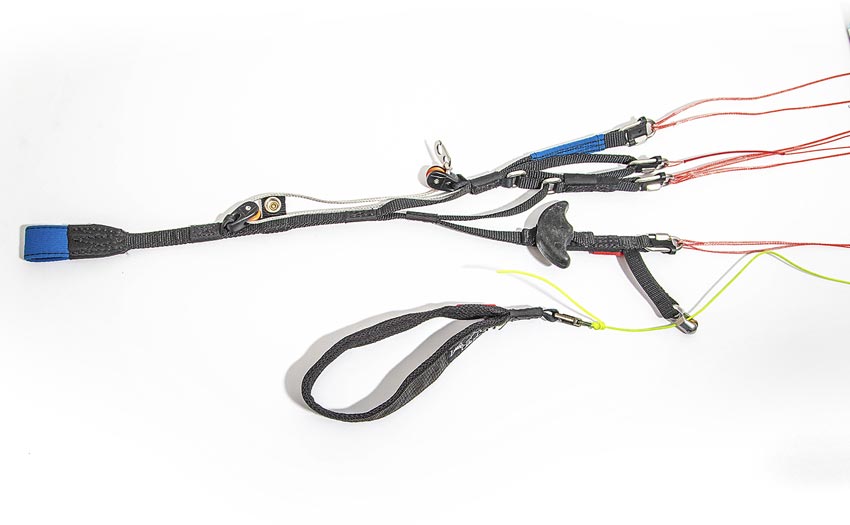 Tom founded Little Cloud back in 2008 after working as a kite and paraglider designer for Ozone. At the beginning he focused on making small gliders that had better flying characteristics than the speed wings that were the trend of the moment, and Little Cloud quickly became synonymous with mini wings.

However, Little Cloud have since expanded their range to include more standard paragliding sizes while keeping the classic Little Cloud traits of pitch stability, direct handling and shorter lines.

The design process is very hands-on. “It starts with me setting the goals I want to achieve,” Tom explained. “I then make a series of prototypes until I am really happy with the wing.”

He then works with a core group of local pilots to finalise the glider, before putting it out to a larger group of pilots to fly and report back. “This means the wings get flown in a wide range of conditions and with different equipment.”

The feedback allows him to make changes quickly, and cycle through prototypes and testing. 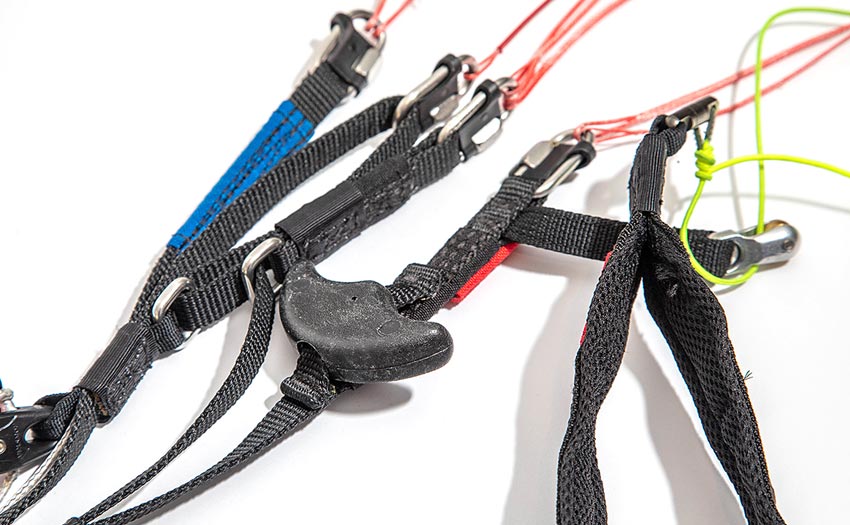 Risers, featuring the rear-riser grab handle and magnets for the brake handles

Why no EN test?

Crucially, and perhaps bravely considering the commercial implications, Little Cloud don’t put their gliders through EN certification: there is no EN B or EN C letter to put on the Gracchio.

It is one of the first questions a pilot typically asks about a glider, and so not having EN certification rules out a vast swathe of potential pilots who will instantly file the wing in the “not for me” box.

Tom’s reasoning is that, because of the extreme collapse resistance of modern gliders, certification today doesn’t give a pilot a true idea of how demanding a glider is “when stuff happens”. When things go wrong for a glider in flight it is, “when conditions are really bad, far from the calm conditions that testing is done in.”

He adds, “People feel reassured by ticking boxes and certification is one such tick.”

It doesn’t “fit the wing to the pilot” though. “Especially with more and more wings fitting into the same category.”

Instead, “For us it is more important that we describe the wing with a lot of honesty, so pilots can choose the correct one that suits them.”

The gliders are strength-tested to EN 926-1 and, he explains, “We also do most of the EN certification tests, especially concentrating on the low-speed to avoid any deep-stall problems.”

Mainly though, he and his team of test pilots fly the gliders. “We do a lot of flying in real conditions, letting the wing react within reason so we can get a real understanding of it. After 70 hours you have a good feeling of its behaviour. Repeat that with several pilots and you have a good idea of the glider and who you should aim it at.”

One area Tom is “particularly pleased” with is the tension within the Gracchio. “I managed to get incredible results in real life collapses without altering the performance too much and keeping the sharp handling.” One of the aims was stopping the glider from re-inflating and re-flying too quickly – damping energy in deforming the LE is also key. “This gives smooth reinflations with no change of course and very little pitching and height loss. At the same time the tension gives a damped feel for the airmass, with the wingtips able to collapse when needed, showing the pilot what is going on so (s)he can react as needed.” 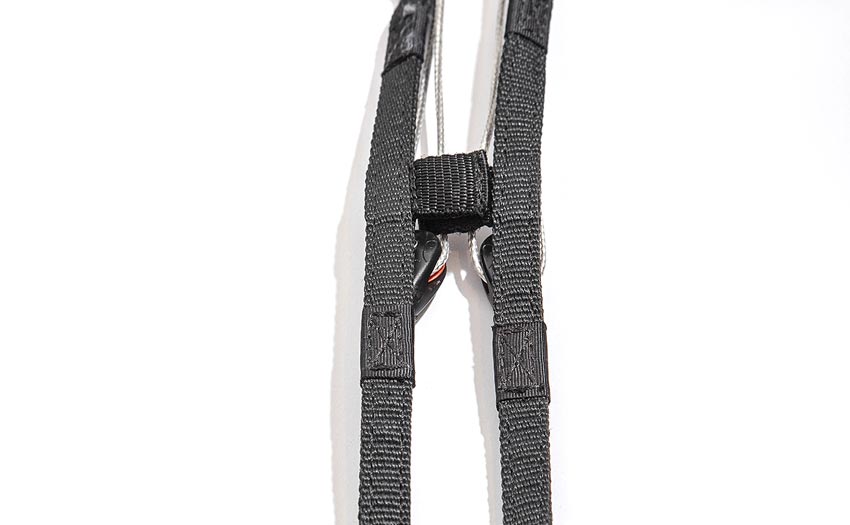 A neat clip to keep the risers together. This is designed to make clipping-in facing the wing easier (see https://vimeo.com/162683558)

Back in the south of France I took the wing to my local launch. The sail is made from Dokdo 20D, a 35g/m2 cloth that is shiny and soft to touch, and the wing is only available in one standard colour – lime green, with the Little Cloud logo printed on it.

Aspect ratio is moderate at 5.6, with 57 cells. Construction is relatively simple, with no obvious new tech, and that all keeps the weight down, making it suitable as a hike-and-fly or travel wing.

Available in six sizes there is quite a lot of overlap in the middle sizes, so you should be able to find the perfect size for your weight.

Lines are all unsheathed and the wing uses a pure three-line layout. The risers are made of thin webbing, with one floating riser but no split-As. There is a plastic handle on the rear risers for controlling the wing on bar. The colour coding is quite subtle, with the A-risers having blue tape, but then this isn’t a beginner’s wing.

The brake handles attach with strong magnets. I would have liked a little more stiffness in the handles, they are soft and large – great for comfort– but I found them a little difficult to get my hands back in if I let go for some reason.

On launch the wing is easy to handle. It comes up smoothly and relatively quickly but with no obvious tendency to overshoot. There is no need to haul on the brakes and it is better to move under the wing to keep your momentum.

In the air, while the wing may not float up thermals like some, its direct handling makes it easy to core rowdy mountain thermals and not get pushed around. When you glide to the house thermal and climb straight to base you can’t help but enjoy yourself.

The wing has a solid, reassuring feel. Climbing from the lee into the true meteo wind didn’t give me any surprises. It feels pretty collapse resistant, but on a couple of occasions the outer tip rolled in – as Tom had described – giving me notice to pressure it up a bit more and roll it out.

Once high over the valley I tried a few induced side collapses. There is quite a bit of pressure, but pulling quickly and in I was able to get steep collapses and hold them in. It was easy to keep direction by leaning away from the collapse and using a little brake. Using less weightshift and a little more brake than I normally would the wing also behaved well, a sign of a good amount of brake travel.

On a different, windy day I set myself a small task around our valley. Pushing into wind through turbulence the wing didn’t get pushed round much, maintaining its glide. On glide it feels pretty pitch neutral. The rear-riser handles are effective at controlling it if it does try to pitch forward.

At one point I found myself having to escape a growing cloud. Using big-ears and speedbar worked well, giving more sink while maintaining forward speed. Pulling too much did make the ears flap around and there seemed to be a sweet spot where they were calm. On release they generally rolled out on their own, although occasionally a pump was required. 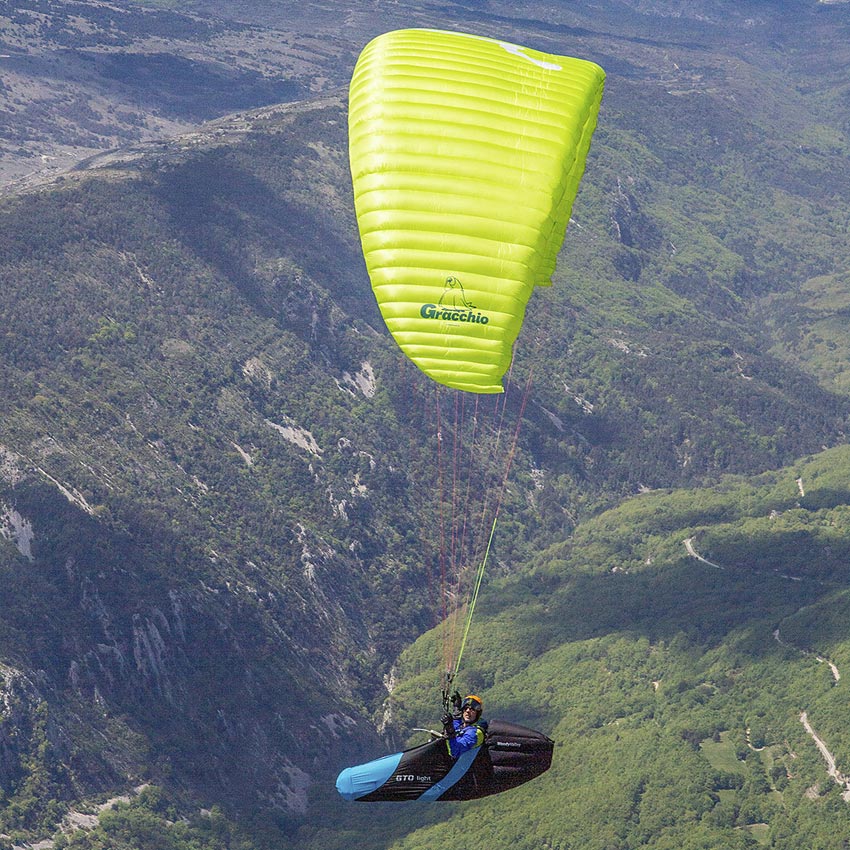 The “go-karts of the sky”, short lines, pitch stability and roll are in the glider’s DNA. Photo: Charlie King

As the name suggests – Gracchio is Italian for Alpine chough – this is a wing that is most at home in the mountains. It is not really floaty enough to be easy in the flatlands (unless you are at the lower end of the weight range), but in its home territory it’s a joy to fly. The direct handling allows you to flick into strong cores where it won’t get bullied out. The solid feel keeps the fun factor high without making it dull.

This is a cross-country wing and has the same demands as a high-B or easy C, and as a pilot you should be comfortable with active flying both with the brakes and the C-risers to get the best out of it. A high fun factor in big air.

Little Cloud say: “The Gracchio is aimed at autonomous  pilots looking for a glider which will not limit their desire of flying XC,  soaring, or hike and fly.”