A superlight and accessible wing, perfect for the hike-and-fly enthusiast, says Marcus King

The Eiko 2 is the second iteration of Supair’s light mountain wing, released in March 2022 at the Stubai Cup. Now available in a wider range of sizes to accommodate the needs of more pilots, it is designed with progression in mind with its “adaptability and all-terrain design,” yet maintains its lightweight hike-and-fly character. With the autumnal hike-and-fly season fast approaching for the northern hemisphere, I was sent out to demo one of the new sizes, a 23, in the southern French Alps. 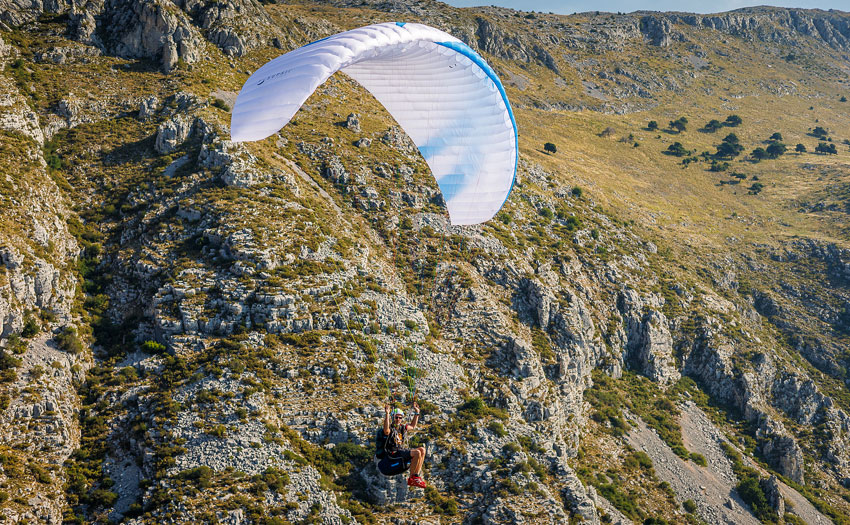 “User-friendliness” was a key factor in designing the Eiko 2, according to its designer 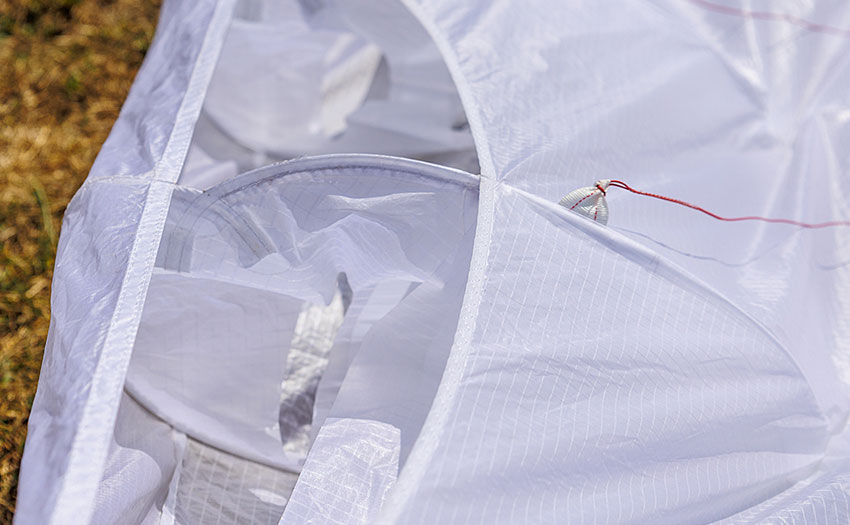 The design is based on Supair’s school wing, the Eona 3, but concentrates on lightweight materials. Made from a mix of Porcher 27 on top and Dominico D10 on the bottom, the wing is very light. There is Porcher 32 on the top of the leading edge for extra durability. The 23 weighs in at just 2.87kg and packs down to a very compact bundle – these features, combined with the supplied Trek 30 pack, make for a remarkably carriable set-up. Plus, with the compact packing size, you could easily take it along as a travel wing.

Designer Pierre-Yves Alloix told us he concentrated on making a more user-friendly wing rather than working to save every gram: “User-friendliness makes a big difference if you are tired [after climbing a mountain].” The wing is just 200g heavier than the equivalent Gin Yeti 5, which is certified to 100kg rather than the 95kg top end of the Eiko 2. The 23 Advance Pi 3 weighs about the same as the Eiko 2 and is EN A up to the same top weight, although Advance have certified it EN B up to a higher top weight of 110kg.

The Eiko 2 has 38 cells and an aspect ratio of 4.8, which is a little higher than both the Yeti 5 and the Pi 3. The leading edge features a mild sharknose, and the cell openings are supported by two plastic rods. Small attachment points on the top of the leading edge hint at its mountain pedigree. Supair even supply a set of pegs that can be attached to these points to keep the wing in position on snowy slopes. 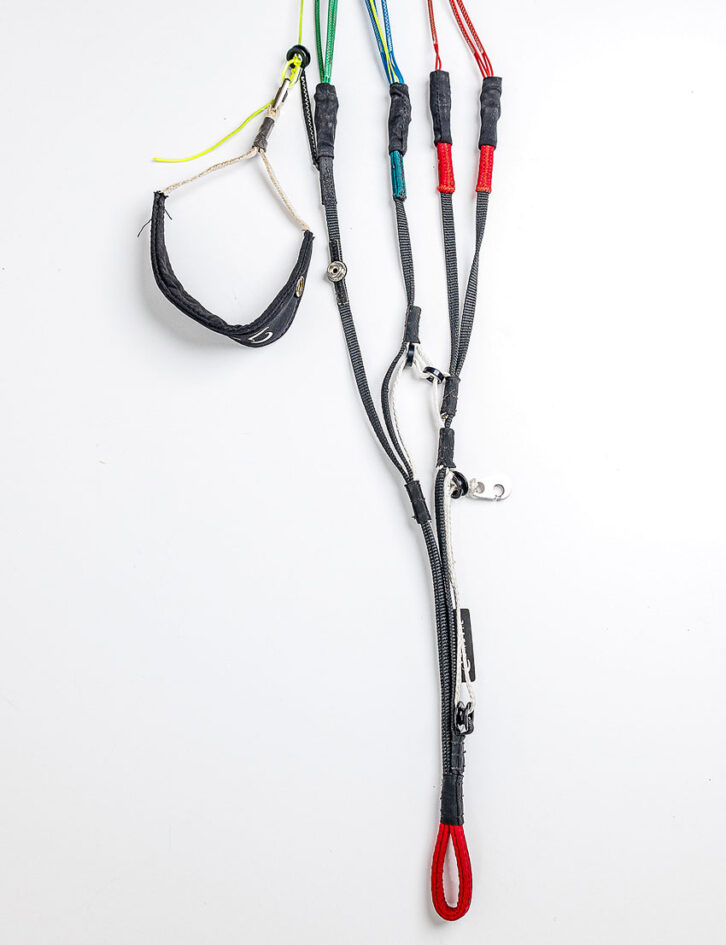 Instead of fiddly bootlace style risers, Pierre-Yves and the team at Supair opted for custom-designed thin webbing risers made especially for the Eiko 2. They worked with rope and webbing manufacturer Cousin Trestec to create a new 7mm webbing with Kevlar inside to stiffen it. The stiffness makes the risers easier to handle and clip in, with less risk of inadvertently twisting them – perfect for when you are physically and mentally tired on top of a peak. Coloured clip-in points further simplify things.

The lines, which are sheathed on the lowers, are connected by neoprene-covered softlinks, the brakes are attached with poppers and are soft and comfortable, and there is a speed system with Brummel hooks. As a whole, the risers look nicely finished and are well thought out. 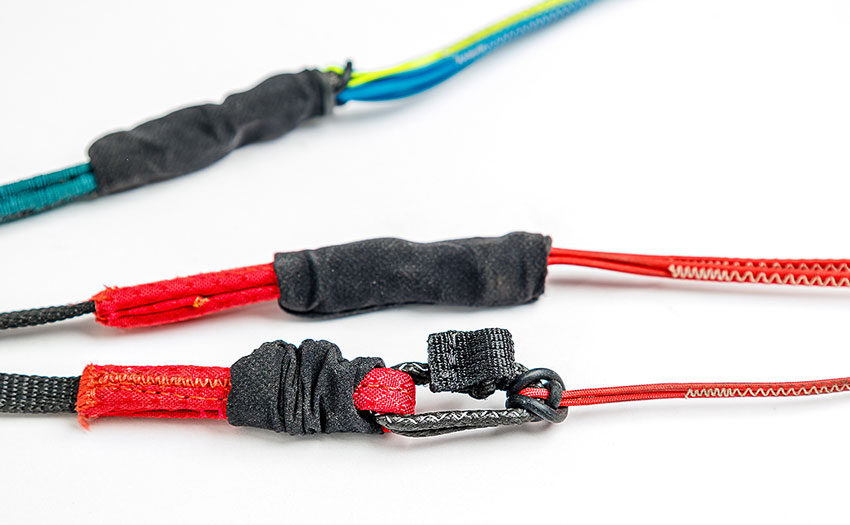 When you head into the hills, you want a wing that will launch easily regardless of the conditions, and the Eiko 2 meets the mark. The wing rises easily and quickly without needing much input to steady it overhead. I flew it in conditions varying from no wind to a good strong breeze blowing over launch, and, in all cases, it came up perfectly with no drama.

Being made of lightweight materials, it can need some managing on the ground in stronger winds, but when you let it, it comes up without any fuss and doesn’t want to pull you off your feet. This is great news if you are launching where a drag would send you careering into rocks.

Forward launching on light and no wind days was equally simple. Simply walk forward, then accelerate as the wing starts to rise, and it comes up straight overhead. A slight dab on the brakes to steady it, and you will be off within a few steps. 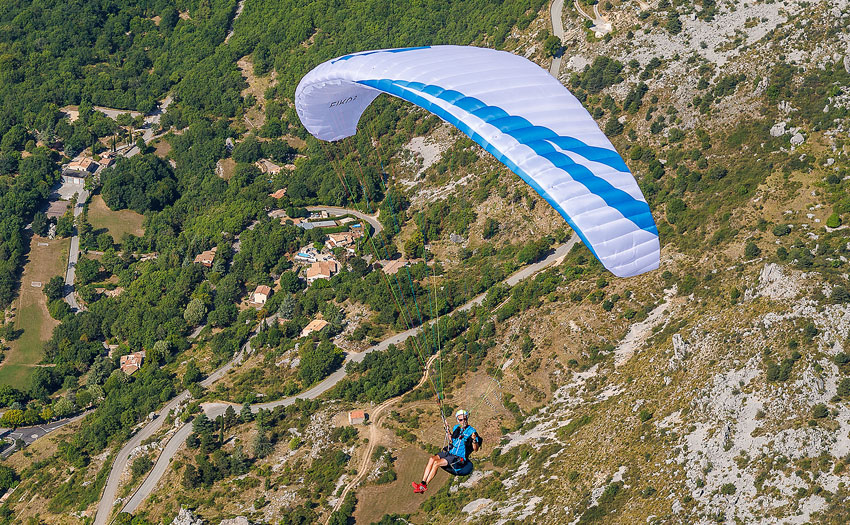 Loaded near the top of the weight range, the wing had a good forward speed, and the bar gave a decent increase of around 10km/h without any massive increase in sink. Photo: Charlie King

During the release at the Stubai Cup, Pierre-Yves told us they have done a lot of development work on the brake range of their other EN-A wings, the Eona 3 and the Birdy. They’ve added straps across the span of the wing so that when heavy brake is applied, the profile deforms less, thereby delaying the point at which the wing stalls.

Though a lot of internal structure has been removed in the Eiko 2 to reduce weight, they took notes from the Eona and Birdy designs and retained these spanwise bands. Therefore, though the wing reacts quickly to inputs, you have to pull a lot of brake to get to the stall point.

This is most noticeable on landing, where you can slow the wing down well – a must for landing in rocky mountain terrain. Coming in fast and using the energy gives a nice pop to the flare. This timing is forgiving and helps you make perfect landings regardless of how much wind there is. 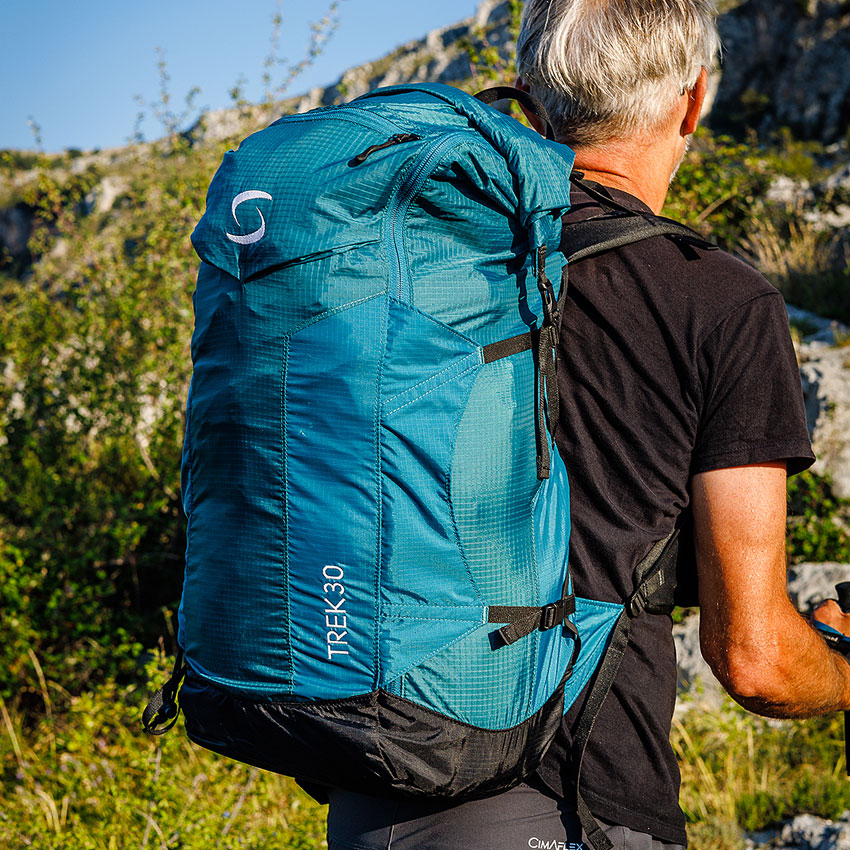 It comes in the Trek 30 pack, a well-designed trail-style bag with enough room for wing, harness, helmet and spare clothing.

In the air, the wing maintains the simplicity of the launch and landing and is very undemanding to fly. It seems to absorb turbulence well with no tendency to pitch forward quickly. When entering strong thermals, it can be a little blocked and may feel like it hangs back just a little bit, but there is none of the aggressive pitching forward you might expect to follow. The brakes are nicely responsive, making it easy to put it in the best parts of the lift. Flying the 23 near the top of the range, I did notice an increased sink rate when flown alongside a mid-loaded EN-B XC glider. However, the Eiko’s agility means you can make the most of the lift available, even the small bubbles.

The wing turns easily with no sticking points and doesn’t roll as easily as some wings of this class do. Of course, getting more physical with the brakes will see it roll into the turns more, but it is easier than some to keep flat. This makes it a fun wing to fly in thermic air as well as more sedate top-to-bottom flights. One morning, I found myself flying in 3m/s climbs for an hour or so and landed with a big smile. 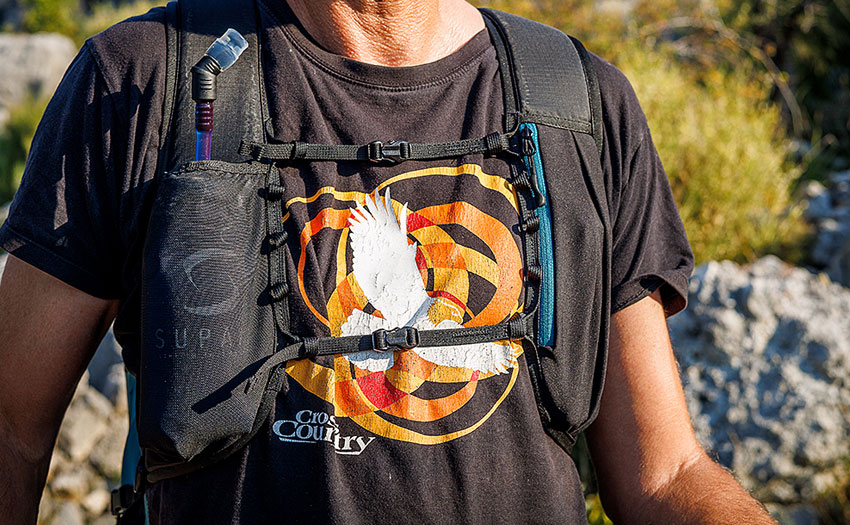 With my loading near the top of the weight range, the wing had a good forward speed, and the bar gave a decent increase of around 10km/h without any massive increase in sink. The full range of the bar is usable, with the leading edge staying rigid. The good trim speed, when weighted up, makes it fun to soar in windier conditions.

Like its heavier sibling, the Birdy, the Eiko 2 has a playful side. By getting deeper in the brakes, you can carve turns down the slopes. Wingovers are easy to initiate, and the wing seems forgiving of timing errors. It’s easy to spiral when you need to get down, and I found it was easy to control the exits and to bleed off the energy. With split A’s, big ears are simple to pull and effective for getting down, especially when combined with a bit of bar.

Pierre-Yves and the team at Supair have made a fun and well-performing wing that is accessible, packs down small and weighs very little. Its ease of use will make it a great companion for adventures in the hills where tiredness or conditions can provide extra challenges. With the new sizes, Supair have widened its appeal. It makes choosing one a bit more difficult, but you will find one that fits your style and use.

Marcus flew the Eiko 2 size 23 (70-95kg) in the southern French Alps at around 92kg, paired with a Skywalk Core harness and the supplied Trek 30 pack