Marcus King gets into the mountains for some winter hike-and-fly adventures.

The Yeti 5 is a safe and easy-to-fly mountain wing suitable for all levels of pilot. Its dependable launch characteristics combined with a dose of fun will keep you smiling.

The Yeti 5 is Gin’s latest incarnation of their mountain wing. Unlike other manufacturers that offer tiny mountain wings, Gin have opted to offer the wing in more ‘standard’ sizes with four available: 21, 23, 25 and 27.

Although in earlier versions they offered a 19m2 glider, Gin’s Yeray González told us this size will be covered by the upcoming Griffin 2, a light mini wing. Each size of the Yeti 5 has an extended range, but the glider remains EN A across the full weight range. I flew the 23 at around 88kg, putting me at the top of the standard weight range. 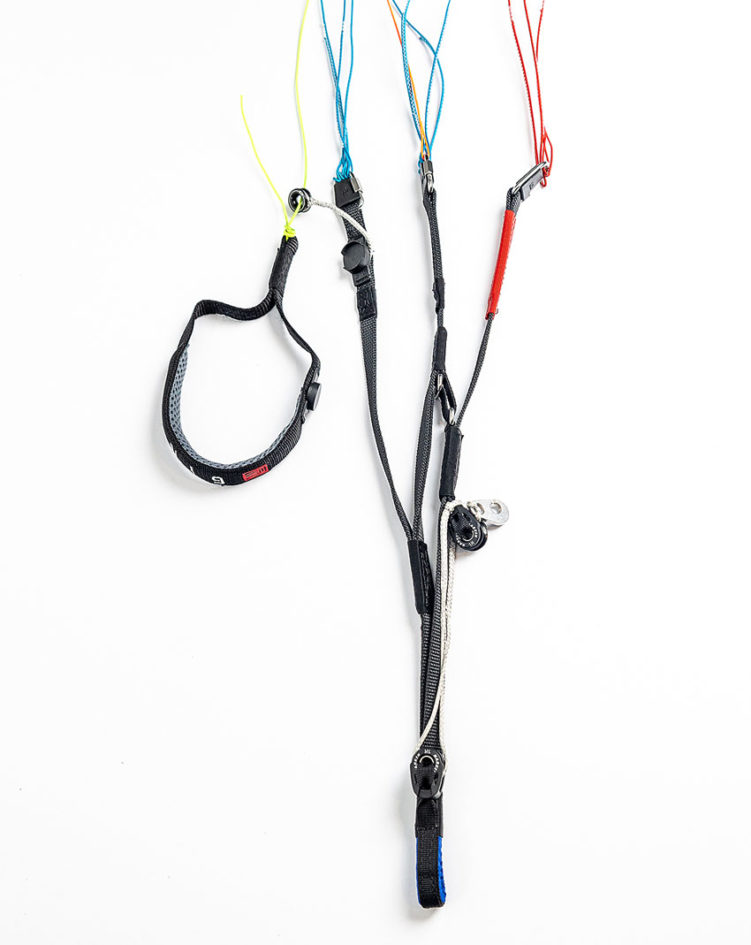 It’s easy to get distracted by the small sizes of the Advance Pi 3 (reviewed here) but comparing the 23 from both brands shows similar wings. They are both much the same aspect ratio of 4.55 (Pi is 0.05 less) and the same size.

The Yeti 5 has a slightly simpler construction with five fewer cells at 33. There is a mixture of 34g/m² cloth on the leading edge (for durability), with 27g/m² elsewhere. Lines are thin but sheathed on the lowers and mids with only the uppers unsheathed, making handling on the ground that bit easier.

My test wing came fitted with thin webbing risers that have a full speed system; Dyneema risers are available as an option. The wing we had weighs a respectable 2.96kg, the lighter risers would save a further 200g. We actually weighed ours at 100g under this, at 2.86kg. The brake handles are nicely padded, are kept in place by magnetic keepers and the brake lines run through ceramic rings. The speed system uses good quality pulleys. All in all a riser-set that you will happy with for day-to-day use.

Packing size is not quite as small as some other mountain wings. The Yeti 5 has quite a lot of plastic rods inside it, so I was less inclined to force it into a small package. The manual recommends concertina packing, although only a normal inner sack is supplied. Gin send the Yeti out with their 55-litre X-Lite rucksack, which is a technical looking sack with space for the wing, a simple harness and some clothing.

This is probably the most important aspect of a wing designed for mountain use. Far from manicured launches and probably tired you want a wing that will launch easily and reliably.

I took the Yeti 5 on a winter mountain hike, snow-shoeing up nearly 1,000m to the summit (something I found far more tiring than expected!) before a 10km glide home in fading light. I arrived tired and cold on the launch, only to find a wind that was switching from one side of the mountain to the other.

As we got ready it was clear we would have to take off from the steeper side of the mountain, with a short runway before a drop-off. Add in soft snow, running in snowshoes (!) and the altitude and I needed a wing that would come up easily: thankfully that is the Yeti.

At other times I took off in all conditions, from gentle backwinds to good breezes with reverse launch. Every launch went well with the wing rising smoothly and needing very little control overhead. On a tight launch with a bit of wind you can bring up the centre of the wing by applying pressure to the centre lines then inflating the tips once it is above you. Launching with any headwind it soon picks you off the ground. 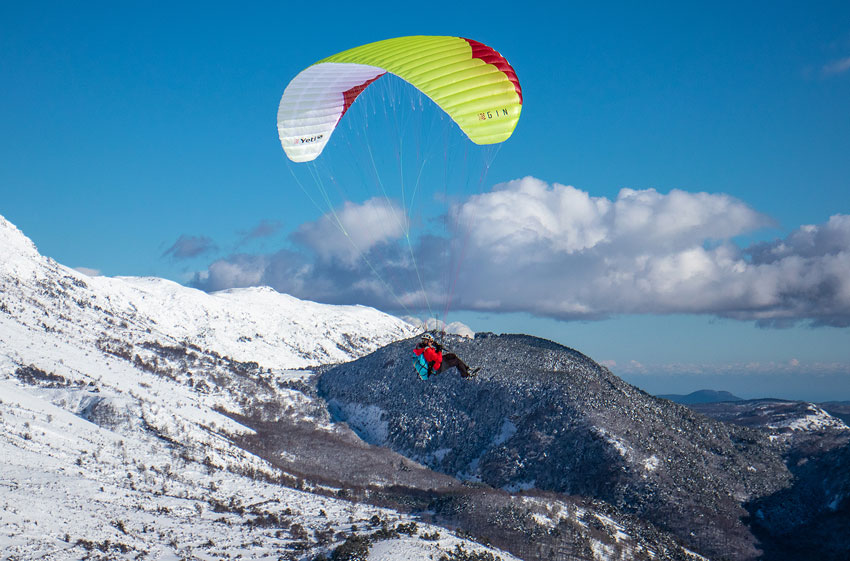 In mountainous terrain landing behaviour is also important. The Yeti has a great ability to fly slow and, more importantly, has a nicely progressive flare. Giving the glider a bit of energy and coming in fast made for smooth landings in nil-wind. Timing isn’t critical: the wing will make you look like a pro.

As well as the 23 I also took the 21 for a fly. With my weight it was obviously flying faster: of course I found you had to be more careful with the amount of brake you applied for the flare, as too much could cause you to balloon upwards.

Although this is a hike-and-fly wing, flown lower in the range there is plenty of performance for thermalling. The wing does have a fun side, so bigger brake inputs will have it banked over but being more subtle will have it turning nice and flat.

I had a couple of good thermic flights on the wing where I launched and despite being near the top of the normal weight range easily climbed up to the top of the mountain in the cores coming up. It’s a very easy wing to fly thanks to its compact aspect ratio and it is easy to keep in the core making the most of the lift. Glide is also very respectable – perfect if you have to fly out to a landing or if you want to take it XC. This all-round ability would make it a good choice as a travel wing, especially for weekend pilots.

Although Gin have made this an easy and predictable wing to fly, there is fun to be had. Going deeper into the brakes will get it carving the turns more, so you can flow down the terrain. As expected, moving down a size made everything faster but without feeling too extreme: it’ll put a smile on your face. It’s nice to have the extra speed combined with EN-A safety for flights in big terrain, but then you miss out on the thermalling fun. Choosing a size isn’t simple.

Gin have created an accessible wing that will suit a wide group of pilots. It has enough of a fun side to entertain the more experienced. Most importantly it has a good level of inbuilt safety for when conditions are less than optimum or when you are tired. It’s a wing built for its target use not for number watchers. I’ve certainly enjoyed having it around for the season’s hike-and-fly adventures.