Gin call their new paramotoring wing, the Pegasus 2, a “universal wing” – meaning it is a wing for everybody, from new pilot to experienced paramotorist. Rather than labelling it a “beginners’ wing”, calling it a universal wing somehow gives permission for intermediate or advanced pilots to fly it without feeling they “should” be on something more advanced.

Over-accelerated progression is an issue in all our sports – pilots jumping onto higher performance wings before they really should. The result is usually the same: they are so busy worrying about the wing that their own performance actually degrades. They enjoy flying less, get tired more easily, have less airtime, sometimes get scared and quite often end up leaving the sport.

Attempting to redefine a wing away from being a pure beginners’ wing to a “universal wing” is therefore a neat trick, which somehow takes the pressure off. The innate promise of a “universal” wing is an easy launch and loads of forgiveness, safety and fun in the air. What’s not to like? 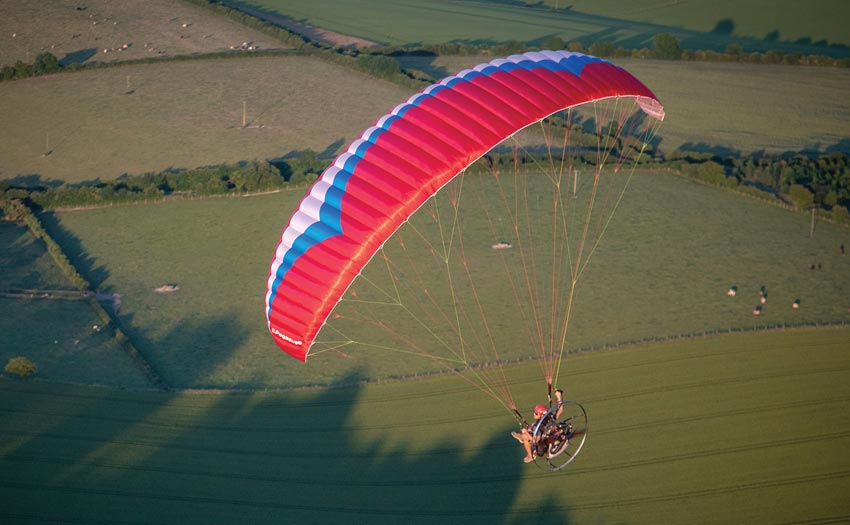 Designed to be accessible to all the wing is fun to fly with no surprsing or unexpected behaviour. Photo: Marcus King

Gin Seok Song, the man behind Gin Gliders, has been in free flight for 40 years, having started hang gliding in 1977. After 20 years running Gin Gliders, we know his heart is really in gliding flight, paragliding without a motor.

Indeed, when Gin launched their first paramotor wing, the Pegasus, at the Paramotor Mondial, a big fly-in in Blois, France in June 2015, I remember asking Gin the man about paramotoring in general. Was he entirely comfortable in this environment of motors and propellers? A thoughtful, “not really my scene yet” told the story.

Paramotoring and paragliding are odd bedfellows, we know that. Some pilots will forever be in one camp and have nothing to do with the other, while others embrace the crossover and each other. C’est la vie.

Anyway, Gin the man knows how to make wings, and when he embraced paramotoring he also embraced Laurent Salinas, an expert French paramotor pilot and multiple champion with more than 20 years’ experience and a life-long passion for the sport. Laurent is key to the development and testing of Gin’s paramotor wings.

Three years on from the company’s first paramotor wing they now have a full range: the Pegasus 2, Vantage 2 (intermediate), Falcon (reflex, intermediate to advanced), Carve (slalom and freestyle) and Condor (tandem). 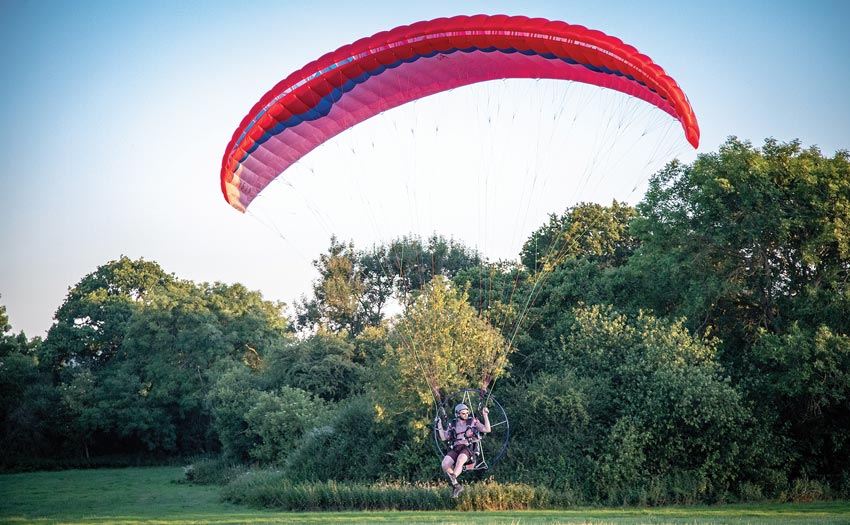 With 38 cells and an aspect ratio of 4.8 the glider is an entry-level paramotor wing that can also be used for paragliding. Photo: Marcus King

As the entry-level universal wing, the Pegasus 2 is aimed at “beginners and leisure pilots” who want “a confidence-inspiring wing that is also fun to fly.”

Laurent says that one of the biggest problems in paramotoring is beginners choosing a wing “to grow into” – an early post-school form of over-accelerated progression. This is understandable, as wings are expensive and, in paramotoring, they often get overlooked while a lot of thought is put into which paramotor to buy. Why get a basic wing just to sell it on after 75 hours when that intermediate glider will surely be good for 250+?

Laurent warns however, “Such wings are often too hot and the result can be broken props, scraped knees and worse.” Instead, “when you start with the right wing, you will learn faster and be safer in a wider variety of conditions.”

For this reason they have designed the Pegasus 2 as a “do everything” wing that will be good for at least the first two seasons of a pilot’s flying career, “or even much longer”. Notably, it is not a Reflex wing, meaning a paraglider pilot like me should automatically be at home on it, without having to change flying style (Reflex wings are flown “hands-up”, which can take a bit of getting used to.) 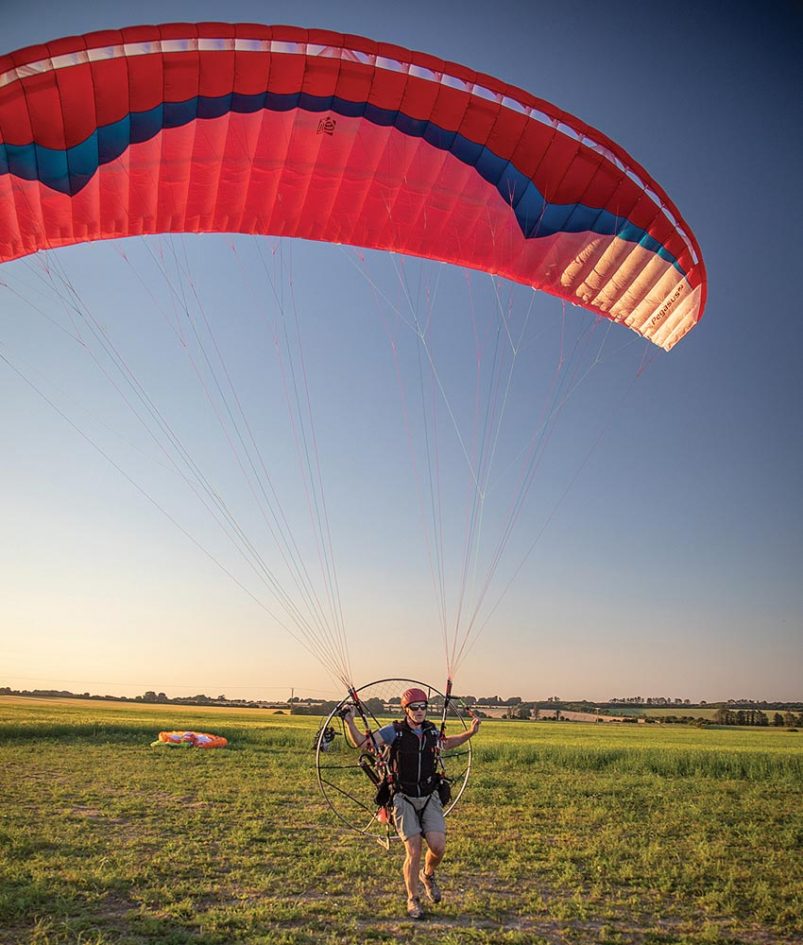 I flew the Pegasus 2 on a midsummer trip to visit the Parajet factory (see The Parajet Story, XC193). On our first evening we’d arranged to meet Parajet’s Tom Prideaux-Brune somewhere in a field in Wiltshire. It was 8pm, the heat of the day had gone, and there was a warm, light wind, a rising moon and a setting sun – perfect conditions for paramotoring.

Half a dozen pilots were already flying or about to fly, and Tom encouraged us into the air straight away. I hadn’t flown a paramotor for a while, but I grabbed the Pegasus 2 and unfurled it. My first thoughts were that it looked simple and straightforward and wouldn’t present any problems. The risers were clean and clear, there was no complicated brake system or tip-steering rig, and the sheathed lines just fell away easily.

In fact this is what Gin say about the wing: “Simple and clean three-riser layout”; “colour-coded lines for easy identification”; “strong and durable materials”. In short, simple and un-fussy, clean and modern.

Laid out, clipped in to my borrowed Parajet Zenith, Tom from Parajet said: “The wing is very efficient, you don’t need to make a big run.” Arms out, engine idling, I took three steps forwards and the wing came up in the light breeze. Overhead, I started to run (“back straight, head up!”), applied the throttle and was quickly in the air. 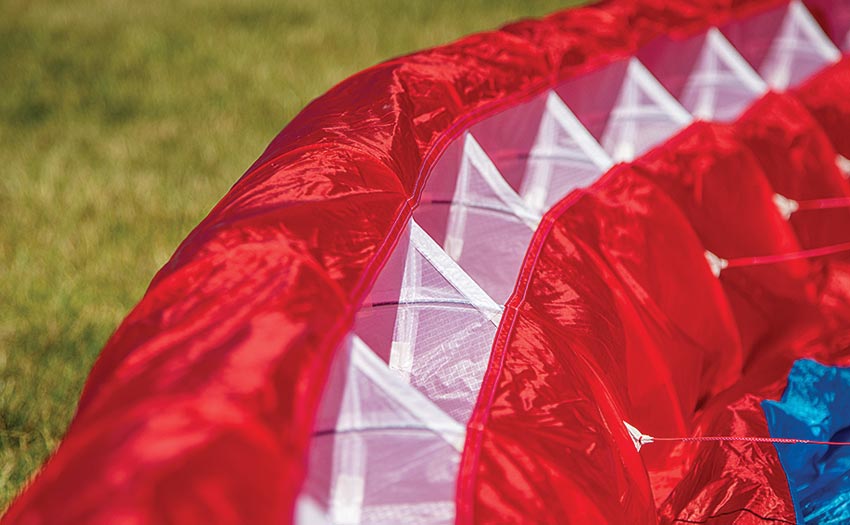 At full power I seemed to rocket up, the Zenith driving me easily into the air. The glider was solid overhead, but also felt light. I applied a little brake as I climbed away and made a big left turn up and back over the launch field.

I spent the next hour scooting around the fields of Wiltshire. Climbing high until I met the inversion where wind shear started to rock me about. The glider handled it with ease, as I throttled back, allowed the wing to stabilise and then continued.

Later, lower, I made the rookie’s error of turning a tight-ish 360 through my own wake. The turbulence caught me a little by surprise, but the glider took care of me and itself and stayed solid and in place. Later still, I flew circuits around hedgerows and field-lines, enjoying the easy and accurate handling of the wing and following the sharp corners and sinuous lines with ease. The brakes felt on point and good.

On landing, the flare was easy and straightforward, although the approach was a little faster than normal as I was heavy on the size. I had the biggest grin on my face.

The next night we flew again, this time with a bit more wind. Launch was again super simple (I can not get over how easy modern entry-level paramotor wings are to launch, from any brand, they are just a joy), while the flight involved a headwind and some light turbulence rolling across the rolling farmland below. Again, I felt totally secure, with complete peace of mind. 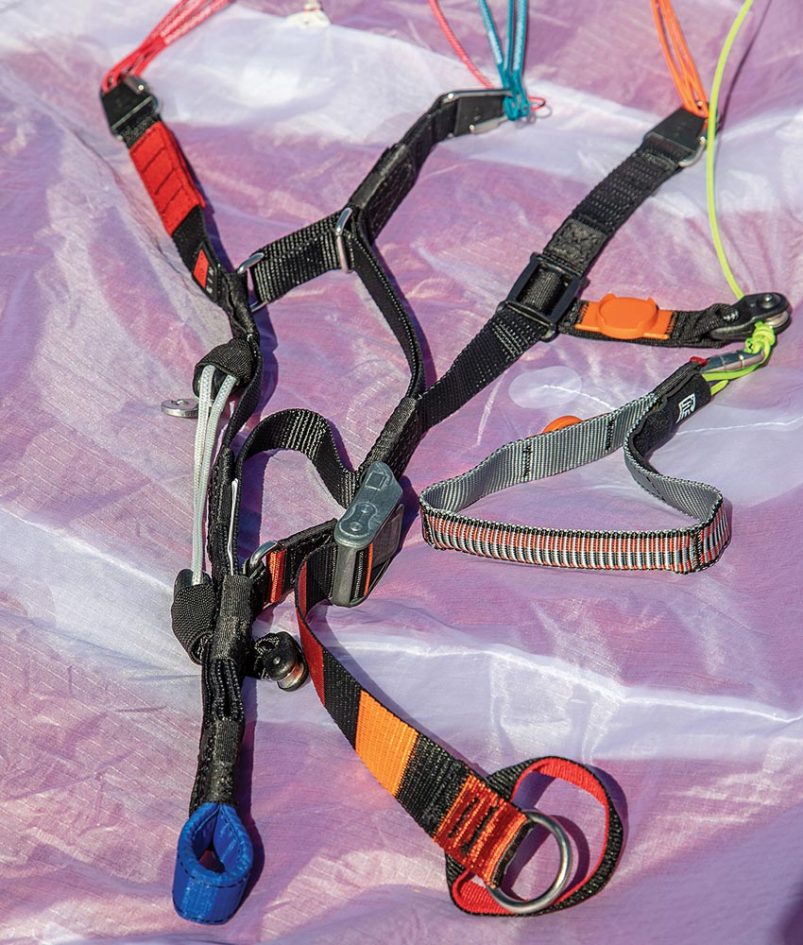 Colour-coded lines and and easy to understand trimmers

For a paraglider pilot like me the lack of complex risers or tip-steering system is a plus point. As only an occasional paramotor pilot there is already enough “extra” going on in my immediate landscape – earplug deafness, throttle, kill-switch (!), different harness, starter, big weight, massive spinning propeller, weird launch run, potentially explosive fuel tank – that the less to deal with the better.

And that’s where I come back to my original note about “universal wings”. If you are a new paramotor pilot starting out on your powered journey then this will suit you perfectly, I am sure, allowing you to learn to fly and giving you heaps of amazing experiences before stepping on to faster, higher performing and more complex wings.

But if you are only an occasional paramotor pilot, or someone who mainly flies paragliders but likes to dabble from time to time, or you use your paramotor as a tool for something like photography, then I am sure this will suit you down to the ground. You will enjoy the simplicity, the handling and the security. Not to forget the fact the wing itself is quite light, and is designed and certified for paragliding too.

It is indeed a universal wing for all people. 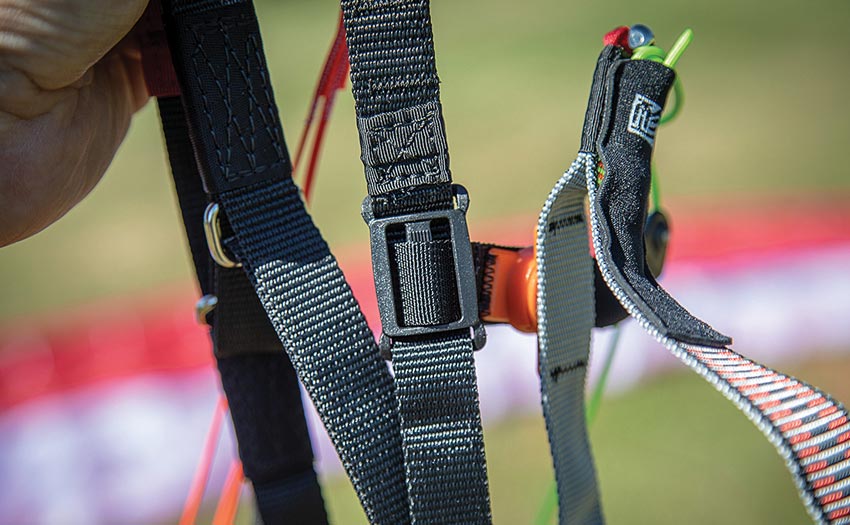