The new lightweight Explorer 2 is aimed at XC pilots who want performance at the top of the B class. Photos: Marcus and Charlie King
EN-B, Reviews

It’s been nearly five years since I reviewed the original Explorer. Back in 2017 I found a lightweight wing that had top performance with dynamic, sharp handling that put a smile on my face. With the release of the new version I was keen to see how the wing has evolved.

Unusually, the Explorer 2 isn’t a lightweight version of an existing full-fat wing but a unique design aimed at the top of the EN-B class. There it finds itself competing with wings like the UP Kangri, AirDesign Soar and the light version of the BGD Base 2, as well as older wings like the Ozone Swift 5, Nova Mentor 6 Light and Skywalk Cumeo; although with updated standard versions already released it won’t be long before we see lightweight updates to these too. 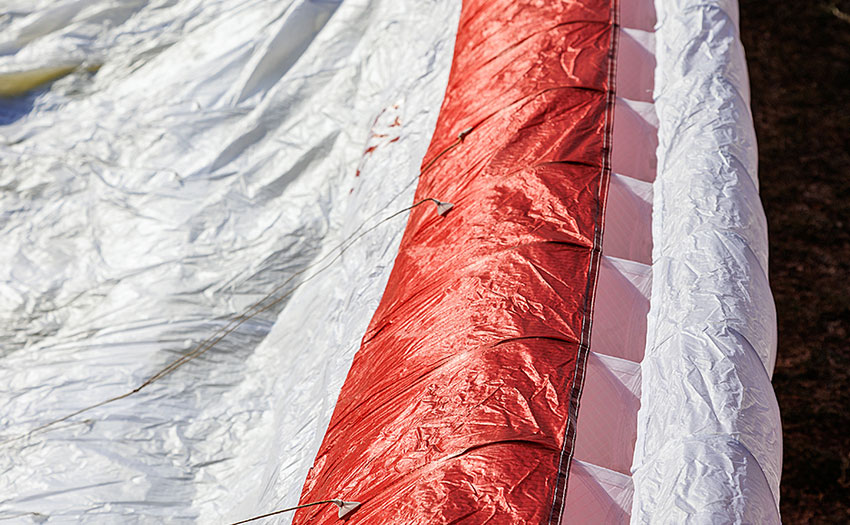 The original Explorer was notable for its relatively high aspect-ratio of 6.1. With the new Explorer 2 Gin have reduced this slightly down to 6.07. It’s still high for the class, but other Bs share similar aspect ratio.

Gin say that for this version they increased performance by increasing the size of the wing. This means for the medium I was flying the flat area has increased from 25.5m2 to 25.96m2 – a modest increase. Gin say that, thanks to work done with their wind tunnel programme, they have been able to increase the area without compromising the handling thanks to optimising the sail tensioning. The number of cells remains the same at 59.

Like the original, the leading edge features a sharknose that uses nylon rods to create the shaping. Gin have used a new type of plastic which they say is more durable. The plastic rods around the C-attachment points on the original have also been replaced by nitinol rods that run across nearly the entire chord. Gin say these make the packing size smaller but still give good support to the structure.

The upper and lower surfaces of the wing both use Porcher Skytex 27, with Skytex 32 used on the leading edge for that little extra durability.

The overall weight remains the same as the previous version, with the medium I flew quoted at 3.9kg. The quoted weights for the wing are with Dyneema risers but our test wing was supplied with standard webbing risers. 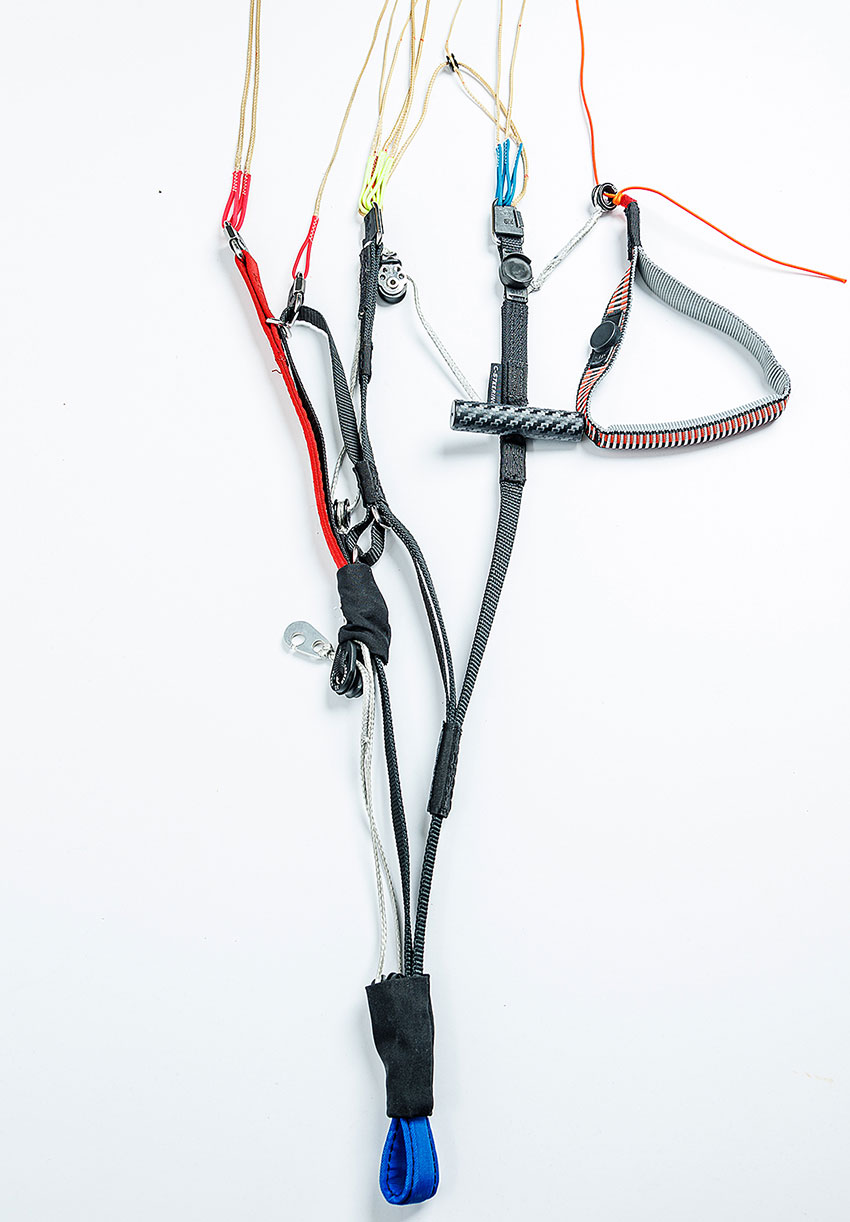 The wing uses a full three-line layout with bifurcation of the C-lines to additional D attachment-points, apart from right at the tips where the layout is pure three-line. The lines themselves are unsheathed Aramid.

The biggest change for the new version is the inclusion of a B-C control system on the ‘smart risers’. This system has a swish-looking carbon handle and a pulley and low-friction ring through which the Dyneema line acting on the B-riser runs. When you pull the C-riser the B is also pulled, thus altering the whole angle of attack of the wing rather than simply creasing the wing. There is an additional low-friction ring on the outer-C through which a line runs to the B-riser, so as speed is applied the trim of the tips is changed, slowing them slightly. If you opt for the Dyneema risers this system is sadly absent and the lines are also directly attached to the risers. Gin’s Michael Sigel said this was because, “we tried to make it as light as possible and really go to the limit.”

The risers themselves are well finished, as you would expect from Gin. The A’s are predominantly red, making them easy to find. The well-padded brake handles attach with Gin’s standard magnets and there are no swivels. I personally found the handles on the small size and would have preferred them a little bigger. The carbon rear-riser handles and higher aspect-ratio certainly give a grown-up racy feel to the glider. 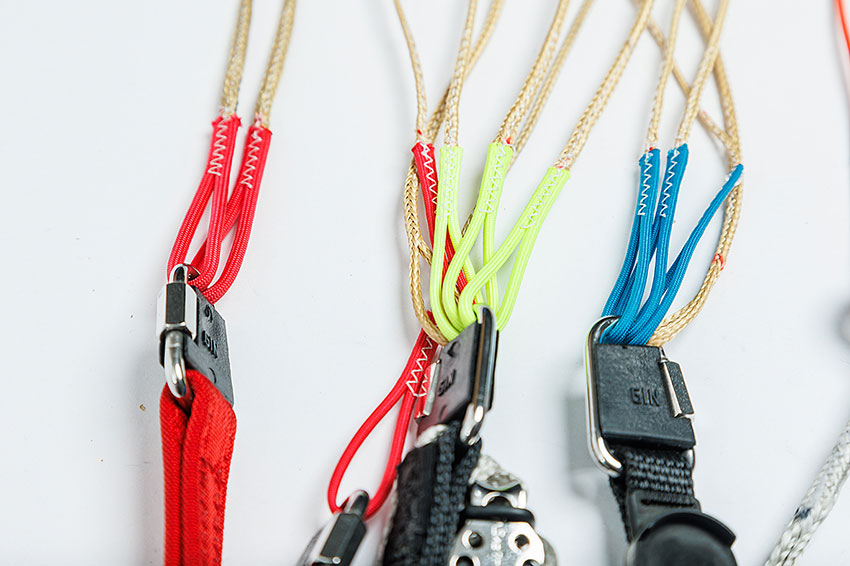 All lines are unsheathed, but have some coloured sheathing near the connections to make sorting easier

In common with many lightweight wings the Explorer comes up easily with no sticking points. Indeed, if you are coming from a wing that requires constant pressure through the lifting phase you may pull too hard: this will see the wing coming overhead quickly and needing braking.

Instead, it requires a light touch. If you are gentle it comes up easily and calmly. Despite the high aspect-ratio it is easy to control above your head with only small brake inputs needed. The wing generates lift well and when you choose to go, lift-off is immediate. 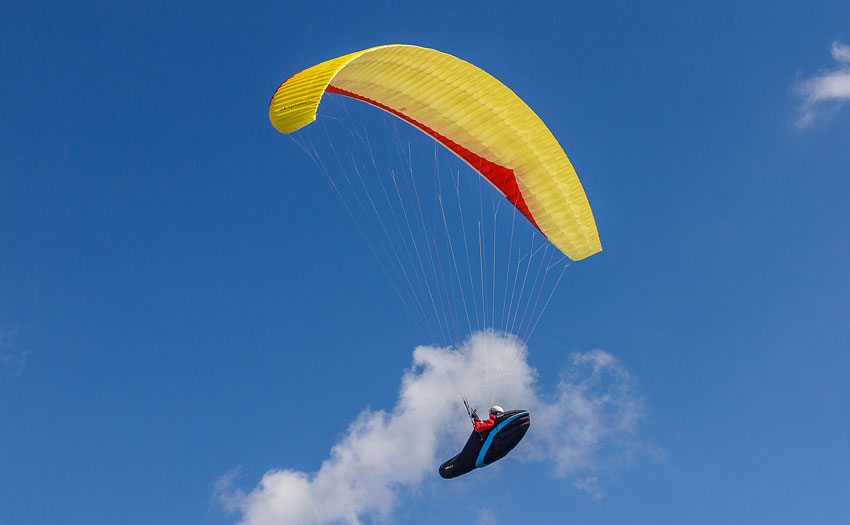 Once in the air I was quickly impressed with how easy the Explorer 2 is to fly. Despite the relatively high aspect-ratio it feels like it acts as a cohesive unit, with no flexing between the sides. The wing doesn’t get moved around much at all, it’s all very calm.

The brakes have slightly longer travel than some wings, but you can still precisely put it where you want and it is easy to turn tightly in the cores. The wing pulls into thermals nicely but not aggressively.

Coming from the Ozone Rush 6 (EN B) everything feels just a bit easier and softer in terms of movement. The Explorer doesn’t push into the air mass in quite the same positive way, which I know some intermediate-level pilots find unnerving. Those who like things spicy may find the Explorer a little tame, it moves around so little.

Either way, it is superbly comfortable even in strong conditions and there is still plenty of information to make the most of the air. In thermals, once banked up it will go round and round happily with not much needed from the outer brake. Brake pressure is on the lighter side so it’s not tiring to fly, but the pressure ramps up nicely as you go deeper. It’s definitely a wing that will keep you feeling relaxed on big days out.

Another advantage of the slightly longer brake travel and progressive nature is that it makes the wing easy to fly slowly when making a tricky top-landing. There is a good flare when needed and the precise control helps with side-landings. 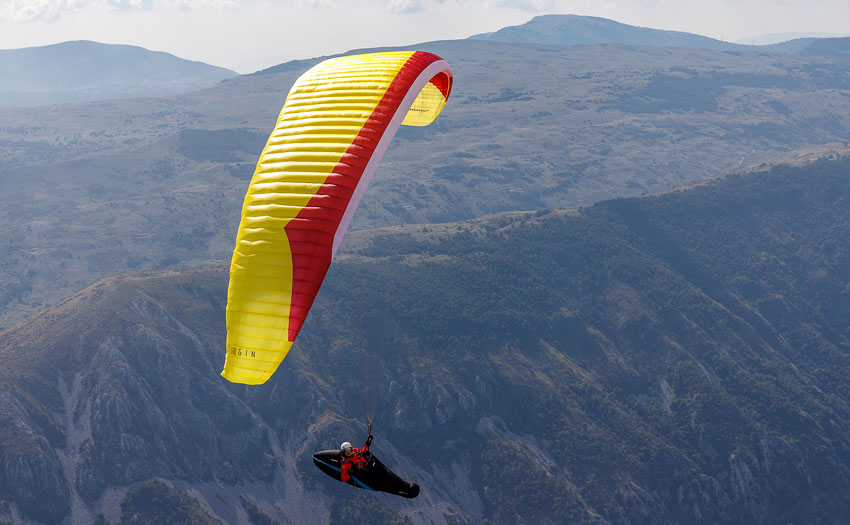 By pure chance, on my first flight with the wing I found myself thermalling with a pilot on the original Explorer. We climbed together with no massive difference in climb rate.

Going on glide however, highlighted the difference between the old and new. I was able to pull away while getting a noticeably better glide. This proved repeatable as we shared the sky for a while.

Gin say they have added extra travel to the bar, which explains the extra speed. Lack of top speed was a criticism of the original wing but on this new Explorer 2 I found I was able to get an extra 13-14km/h on full bar over trim, which is in line with other wings of this class. I certainly never felt the wing was slow.

Like the brakes the bar is reasonably light to use. The wing remains solid across the whole range. The new B-C control is heavier than some but still very effective, although to be honest the wing doesn’t require much pitch management.

I found the system more useful for feeling my way through the shifting air mass, finding the lines of best energy. During the test I flew a couple of local circuits that involved long pushes into wind. I was flying at 4-5kg below the top weight and the wing pushed forward into the air nicely.

Using the rear controls I was able to find the lifty lines and slow up in liftier air without coming off the bar completely. I would say it is not quite as sharp in terms of reaction as the system on the Rush 6, which has a two-line layout at the tips, but it is still effective. Our local site has an 8km ridge run that you often fly along fairly near the ground. The B-C controls gave me the confidence to fly this quickly and allowed me to slow the wing and turn in the wider areas of lift. 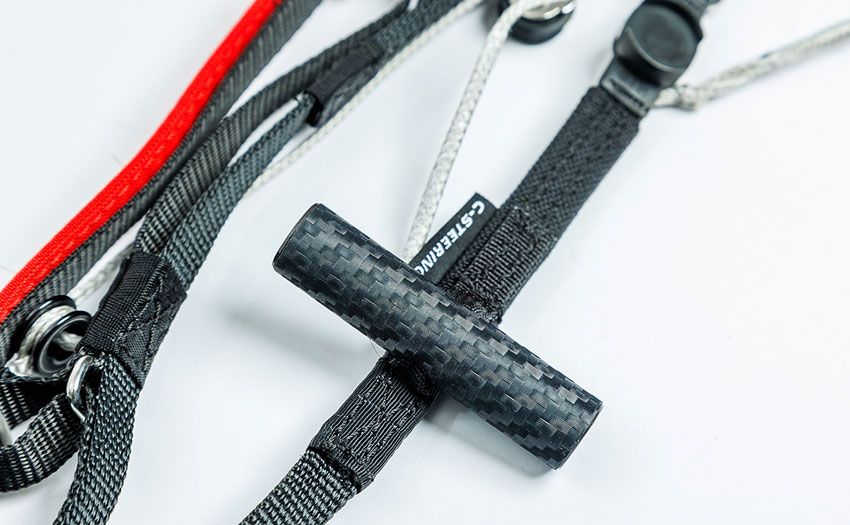 Despite its aspect ratio this is a wing that feels secure and seems to have a high level of passive safety. During my review period I didn’t have any major collapses. Even flying in mixing air with obvious wind direction changes over altitude the worst I got was a tiny tip flutter. Of course, I was reacting to the information coming from the wing but it’s not demanding.

Out over the valley I induced some 50% collapses. The wing was easy to control and counter the turn if necessary. Left to turn it was easy to use the energy to reinflate the wing quickly and fly off.

Big ears are easy to pull in and are stable with no flapping. Once released they slowly roll out; a pump gets the tips out more quickly.

The wing is nicely controllable in spiral dives, with progressive entry. It is easy to control the sink rate and also to bleed off the energy as you exit. 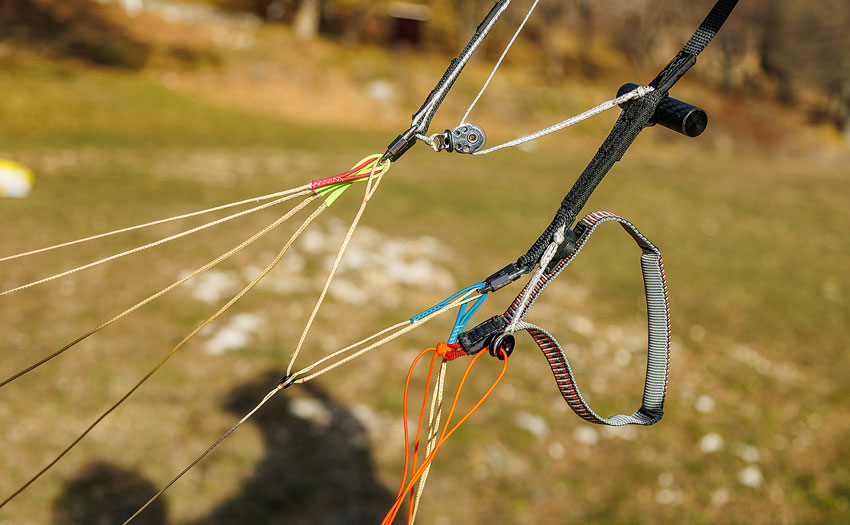 Gin have created a wing that combines superb ease of use with performance that sits at the top of the B category. It does feel a little less dynamic than the original, which won’t make everyone happy, but does make it a very easy wing to fly.

The sleek lines certainly make for a sexy look to the wing. It’s obviously a carefully crafted glider that combines the solid feel of full weight wings with the low weight and small packing size of light wings. As such, it’s perfect for everyday cross-country use and vol-biv adventures in the mountains.

Gin say: “Allows the pilot to reconnect with the pure joy of flight”

Marcus flew the Explorer 2 M (85-105kg) in the southern French Alps at around 100kg, paired with a Woody Valley GTO 2 Light.