Dudek sent us their new Freeway 3, an acro wing designed for beginner and intermediate acro pilots. Erwin Voogt took it to Ölüdeniz, Turkey.

This review is not for acro champions. It doesn’t tell you whether the Freeway 3 is suitable for performing a twisted infinity to helico. Instead, I headed out to see if a serial pilot like me, confident in stalls, SATs and spirals on an EN-C glider, can handle this wing in these basic manoeuvres. 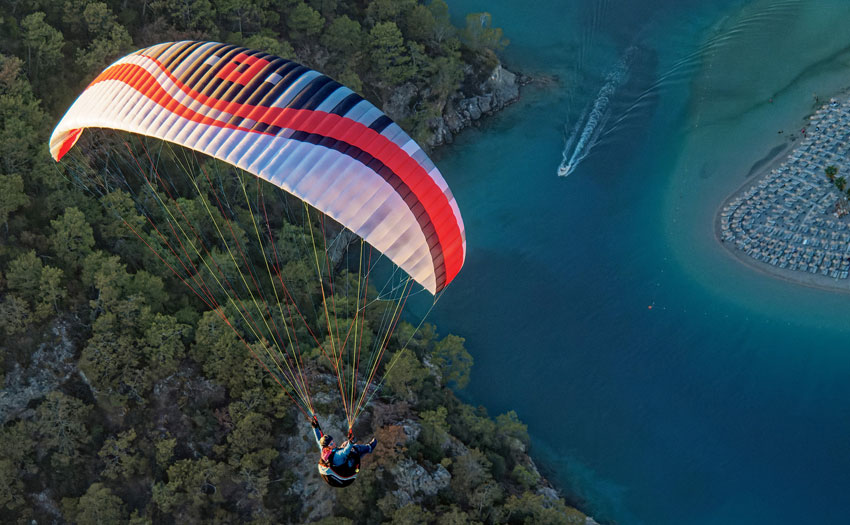 Co-designer of the Freeway 3 is Jean-Baptiste Chandelier, the well-known acro pilot and filmmaker. He said that when creating the Freeway 3 his priority was to provide a wing “dedicated to acro learning,” explaining, “the wing structure has therefore been optimised in this respect.”

The Freeway 3 replaces both the Freeway XX, a freestyle wing, and the Mach 1, a full-on acro wing in the Dudek range. According to Jean-Baptiste, the Freeway 3 combines the friendliness of the XX with the capabilities of the Mach 1.

The first thing that comes to mind when unpacking the glider is how solid and complete it all feels. From the sturdy bag it comes in to the chunky risers with trimmers, speed and acro handles, every detail is there and feels strong.

A remarkable feature of the Freeway 3 is the valves in the cell openings. Jean-Baptiste explained that these have several functions. “The most important is to maintain high pressure inside the canopy while performing infinity tumbling. The valves also increase the perceived force on the brakes when making a helicopter.” 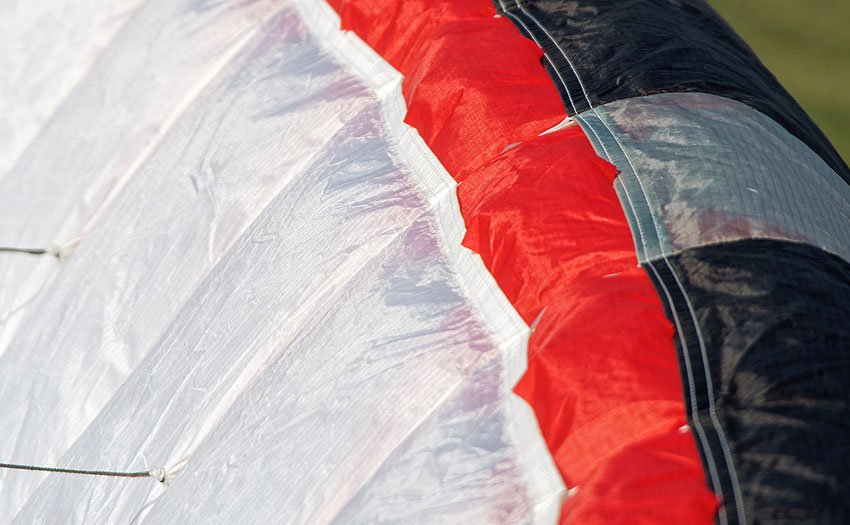 But the valves also benefit acro rookies like me. “Thanks to the valves, it was possible to create a wing that would be easy to inflate on the ground and enable a smooth take-off even in low-wind conditions”, he said.

As with most acro wings the lines are longer than usual, giving more momentum when performing dynamic manoeuvres. To deal with the higher G-forces, thick Edelrid aramid sheathed lines are used in a four-riser set-up.

The risers have it all: brummel hooks for a speed system; trimmers on the rear risers; soft neoprene brake handles with adjustable loop size; red balls (acro toggles) to make steering easier; elastics for quickly grabbing the brake handles; and both magnets and press studs to keep the handles in place.

I found the brake handles very comfortable. The red balls and elastics are handy – why are they not standard on the risers of other gliders? However, in my opinion the magnets to ‘glue’ the handles onto the D-riser are a bit too strong: during launch preparation the risers are often pulled together by the magnets!

I flew the Freeway 3 mostly with the trimmers closed. “Beginner pilots, who are taking their first steps in acro flying should fly the Freeway 3 in a closed trimmers configuration”, Jean-Baptiste advised.

He added: “Advanced pilots can open the trimmers completely and fly the ‘wagga’ style.” This configuration can be also useful in strong-wind conditions. 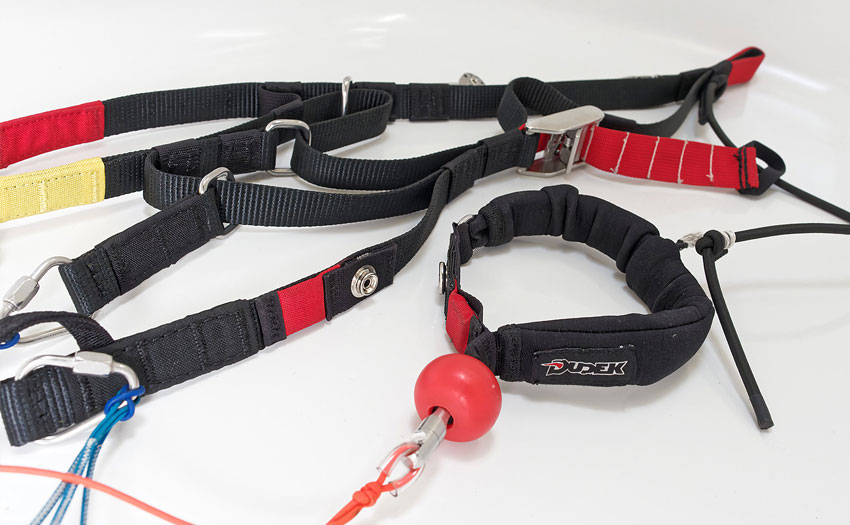 The risers have it all: brummel hooks; trimmers on the rear risers; neoprene brake handles; red ball acro toggles; elastics for brake handles

My first flight with the Dudek Freeway 3 was from the easy and magnificent 1,700m launch on Babadağ above Ölüdeniz. There was just a little breeze, somewhat cross. My first attempt to launch failed. And so did my second…

It appeared that the Freeway 3 has to be guided or pulled quickly to a position straight above you. Don’t touch the brakes before that! If the canopy is not above you or loses some pressure, it will drop to the ground quite unforgivingly. Straight out of the factory, the brake handles are positioned quite high, at least on the glider I flew. Shorter people might want to adjust the length of the brake lines to prevent unintended braking.

Launching with nil wind requires some practise and determination. It took me a few days to learn to launch the Freeway 3 in nil wind with confidence. With backwind I found it impossible, even on a smooth slope like the Babadağ 1,700m. But with a good breeze, the Freeway 3 is easy to handle and, due to the smaller size, launching in strong wind is relatively undemanding.

Contrary to launching, landing the Freeway 3 is effortless. Just pull the brakes and it stops immediately with a little swoop. Everybody can do a high-speed acro-dude landing with the Freeway 3! 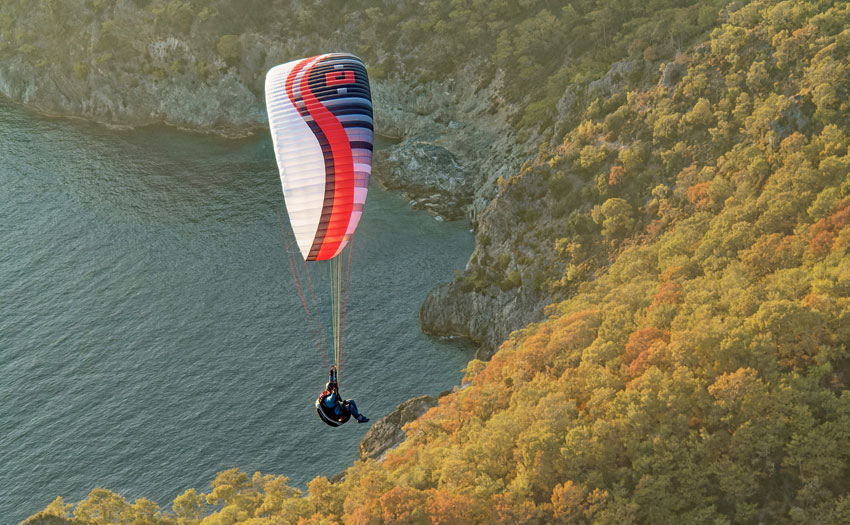 The glider comes in three sizes, covering weight ranges from 58kg to 120kg. Dudek recommend choosing a wing so your take-off weight is in the middle – loading up will increase the demands on the pilot and required skill level.

The Dudek Freeway 3 is, as expected, a very agile wing when coming from a cross-country glider. A tiny weightshift or brake input will already be answered by the wing. We also brought a classic freestyle wing to Ölüdeniz, but compared to that wing the Freeway 3 is definitely a different breed. This is an acro wing, not a freestyler.

In the beginning I was a bit hesitant with the brakes – anxious not to stall it accidentally. But no worries about that. The brake travel is not that short, about 40cm and progressive, and the wing is actually quite forgiving. Wingovers or asymmetrics get out of hand? Just pull the brakes and the glider obediently returns to normal flight.

Spirals and SATs, including asymmetric and rhythmic, easily become spectacularly high for an acro beginner like me. Exiting requires active piloting, but also here the glider is forgiving and a strong pull is enough to return to a straight glide.

I asked a more experienced acro pilot to give the Freeway 3 a go. He normally flies an AirG Emily Peace 2 in the same size, which is a popular acro glider for beginners and competition pilots alike. He reported that launching and landing of the two gliders are very similar. In stalls, the Freeway 3 is sensitive to slight asymmetry and weightshift which makes this glider a bit more tricky with stalls and related manoeuvres like heli, he added.

Stalls should definitely be practised under guidance in a safe environment, unless you are already experienced with other acro wings. The tendency to shoot is mild. Other manoeuvres feel very similar and it feels like the Freeway 3 is a very capable acro glider, according to our pilot.

A bonus is the better glide that the Freeway 3 offers compared to other acro gliders. While flying next to tandems and low-end serial gliders, the glide ratio appeared to be similar to those. The trim speed is a bit faster than the trim speed of solo serial gliders, but tandems usually overtook me. Because of the good glide, thermalling goes quite well with the Freeway 3. That’s an advantage when you want to thermal your way back up to do another round of tricks. Of course, the glider is not designed for XC, but it is not a one-trick acro pony either. 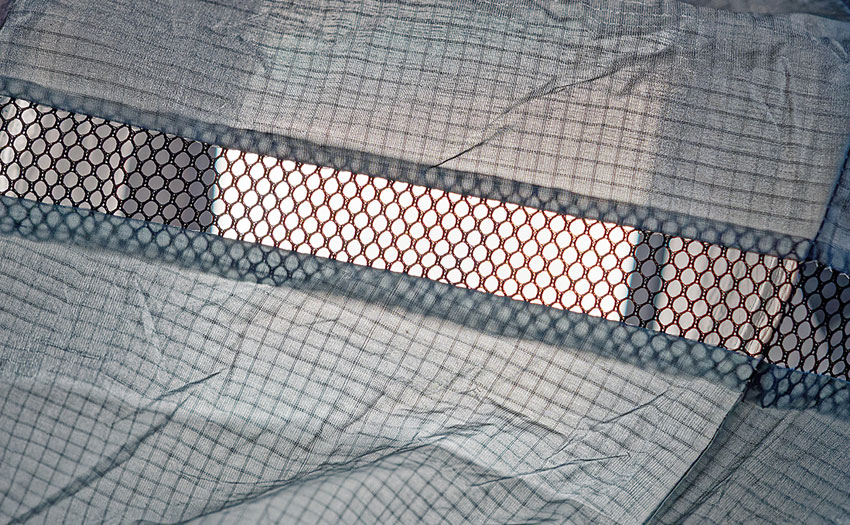 Dudek have definitely succeeded in making a friendly acro wing for acro rookies and intermediates. As an acro beginner, I could safely and confidently fly basic manoeuvres with the glider.

After getting over the only small hurdle, which was to master a nil-wind launch, the Freeway 3 and I became friends and we had loads of fun in Ölüdeniz.

It’s not the ‘Jack-of-all-trades, Master of none’ that freestyle gliders can sometimes be. The Dudek Freeway 3 is a true but accessible acro wing – with a good glide and thermalling behaviour as a bonus.

Dudek say: “The Freeway 3 is the wing with which you will enter the acro world with the ability to perform all manoeuvres, with smooth transitions between them.”

Erwin Voogt has flown paragliders since 2008 and is a paragliding instructor in the Netherlands. He enjoys all aspects of free flying – XC, hike-and-fly, a bit of acro and helping new pilots with their first steps. Erwin flew the Dudek Freeway 3 size 20 with the Maya Lycia harness at an all-up weight of about 88kg.