This lightweight EN A is good for hike-and-fly, travel and weekend pilots who simply want a light glider. Photo: Charlie King
EN-A, Hike and Fly, Reviews

Although new to me, not having had the chance to fly one before, Davinci have been on the scene for a few years now. The South Korean company have built up a full range of wings covering all the classes from EN A to CCC. We met CEO and designer Jihun Lee at the 2021 Coupe Icare and he suggested we try their new hike-and-fly wing, the Hula. A couple of months later a box turned up bearing the Davinci logo. 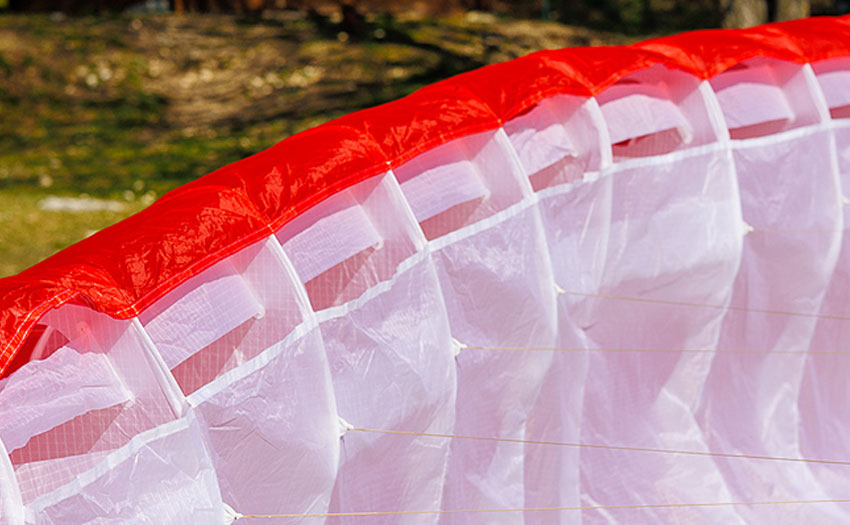 There are six sizes to choose from, covering weight ranges from 50kg up to 120kg. Interestingly, both the smallest sizes start at 50kg with the 21 going to 75kg and the 19 going to 70kg.

The review wing supplied was the 25 and is certified from 70-95kg. I flew it mainly at around 91kg, with a Skywalk Core harness and front-mounted reserve. In comparison, when testing the Gin Yeti 5 I flew the smaller 23, which has a weight range that extends up to 100kg. Advance’s Pi 3 also goes up to 95kg as an EN-A for the 23m2 wing, with EN-B certification all the way up to 110kg. 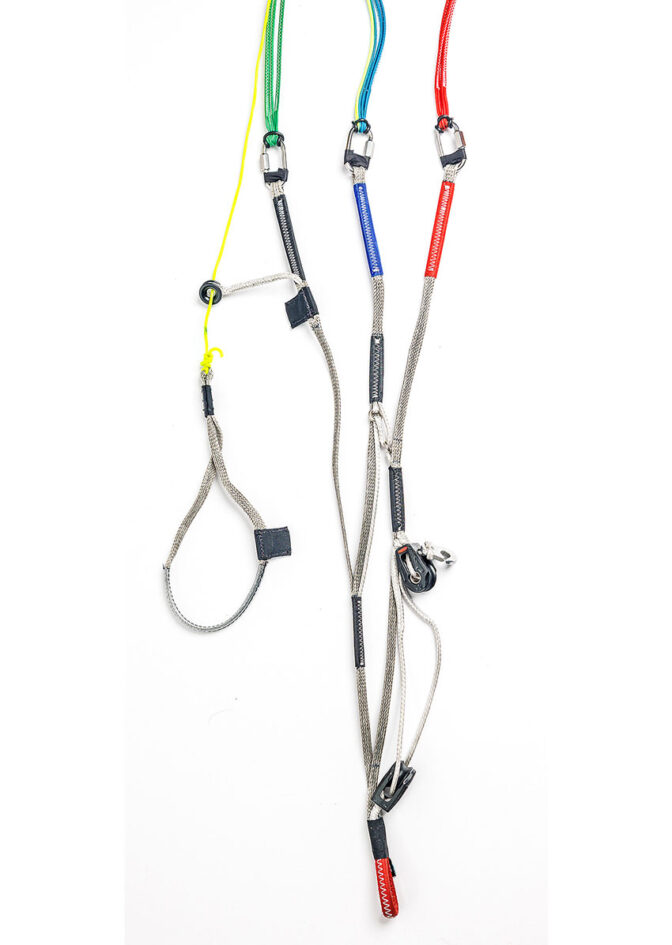 Dyneema risers are simple but have a speed system and colour coding. They attach to the sheathed lower lines with metal maillon

Unrolling the wing for the first time you will notice that it is packed full of the latest tech, some of which is unique to Davinci. On the nose you will find Davinci’s SmartNose+ technology, which is basically a strip of material sewn across the cell opening a little way inside. Davinci say this acts as an anti-return valve inside the wing, stopping air escaping. They say this delays the onset of deep stall and aids recovery during collapses.

The leading edges uses single wires in the cell walls going from the bottom to the top surface around the nose to increase the structural stability of this area. There is also double 3D-shaping on the top of the leading edge with two seams running across the chord to help smooth this vital part of the aerofoil. At the back, the wing is equipped with mini-ribs.

It seems none of the new tech has been removed to keep the weight down. The sail material is a mix of the respected Porcher 27g for the leading edge and ribs and Myungjin Textiles cloth for the rest of the top and bottom surfaces. 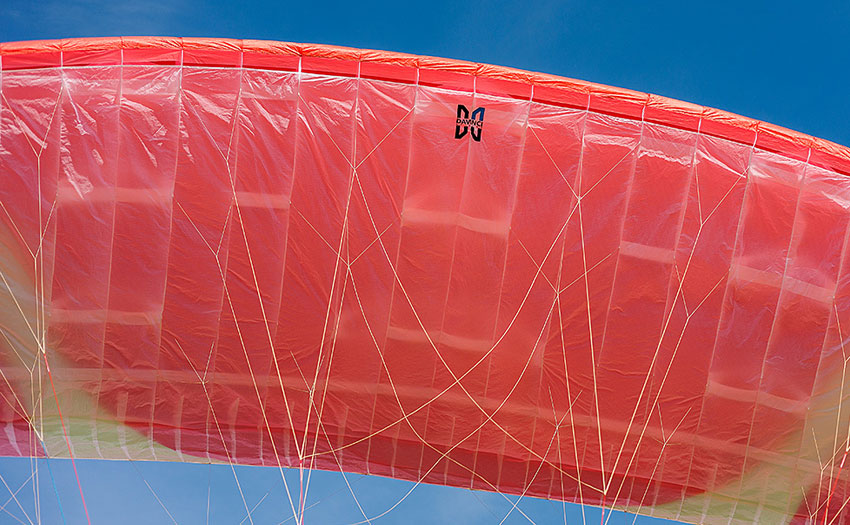 Uniquely, the centre lines are connected to both sides of the wing – Davinci call it their Smart Balance System

The line layout also involves a unique feature – amongst current wings at least – in that the centre lines are connected to both sides of the wing. Davinci call this their Smart Balance System (SBS) and it applies across the A, B and C lines.  The idea of connecting the right lines to the left side of the glider and vice-versa is for “good balance” says Jihun. The system, he says, is designed to distribute the weight from one riser to the other, making the wing more stable and limiting deformation of the glider when strong weightshift is applied.

The upper lines, including the brake fans, are all Edelrid unsheathed. They are the brown colour that can be difficult to see, especially in dry grass, and can be a bit ‘grabby’ when there are roots and bushes on the launch, so care has to be taken when laying the wing out. The lower lines are sheathed to help with ease of use.

The Hula is supplied with bootlace-style Dyneema risers, fitted with a speed system that uses pulleys. Unusually for a lightweight wing the lines are connected with maillons rather than softlinks.

The brake handles are simple Dyneema loops and are stowed on the risers with cloth-covered magnets. I did find these a bit annoying as they want to stick to each other, making sorting the wing a bit more difficult. The brake lines run through ceramic rings and there are no swivels. Jihun said pilots can opt for the heavier Kevlar webbing risers if they prefer that style. 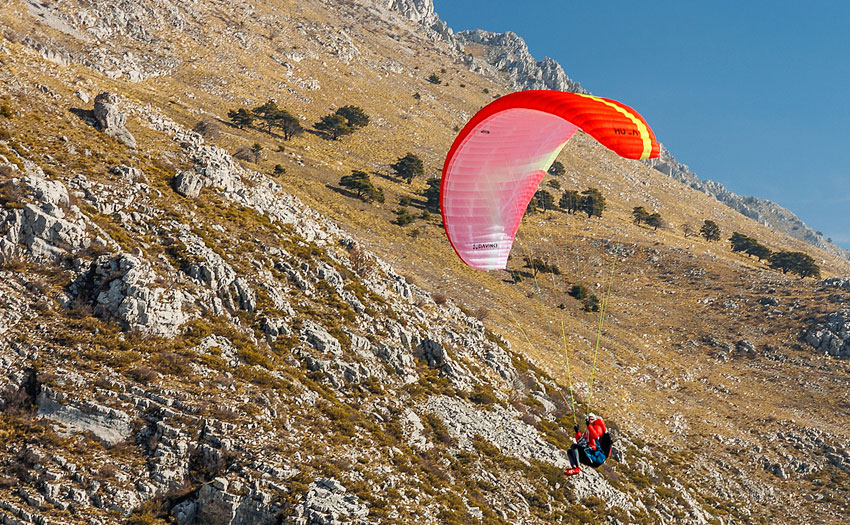 Launch and landing could not be simpler, and it has good feel in the air too

The take-off traits of a mountain wing are important as you’ll often be taking off in less-than-ideal conditions. I have to say that during our review period with the Hula it behaved impeccably on every launch – I don’t think I ever had to abort.

It comes up smoothly with little fuss and no need for anything but the smallest of dabs on the brakes at it comes overhead. In stronger winds it is keen to fly, but easy to control with the rear risers. In zero wind conditions it came up perfectly with no real sticking, although it does require a little pressure to be applied all the way up. It doesn’t race overhead like some, but comes up at nice pace that is easy to control. Once above you it generates lift quickly, meaning you are in the air after a few steps.

It does seem that the SBS works as the wing always comes up straight and true – even when you haven’t been careful with the layout or after a small line catch on a launch. On landing one day a friend who has just learnt was practising his reverse launches in the field. He was having difficulty in the fickle wind with his full-fat EN-A. I suggested he tried the Hula, and straight away he pulled off perfect reverse inflations.

Although marketed as a hike-and-fly wing, because of the lack of extended weight ranges you will be flying it at normal loadings so you can expect standard behaviour. With a lower loading than other hike-and-fly wings I have flown, you get a wing that will soar more easily but is slower. Indeed, you will be able to mix with normal wings on your local site.

It’s a wing that also performs well in thermals and I was easily able to climb out of our local site on it. It moves around a little more than some of the other EN-A wings I have flown, probably thanks to its lightness, but feels stable and gives a good feel for the air.

The ‘normal’ performance level of this wing meant I was able to also fly the local ridge runs easily, even if it felt a little surreal to be flying them in a string harness, having walked up first. Later I paired the wing with the new Crest harness from WoodyValley for a more comfortable set-up that still weighs only 6kg including reserve; that would make a great combination for travelling.

The speed system gives an extra 10km/h or so of speed when pushed pulley-to-pulley and the wing remains solid and doesn’t feel like you are falling out of the sky. Performance is remarkably good and you could easily head off cross-country with the wing, just don’t expect to push into wind.

When told about the SBS system I had worried it may make the wing a bit boring to fly, but I was surprised when I hit the brakes to enter wingovers. It was easy to get above the wing quickly and it definitely has a playful side. It does feel like it stabilises quickly when you go back to level flight, so that is probably the SBS having some effect. 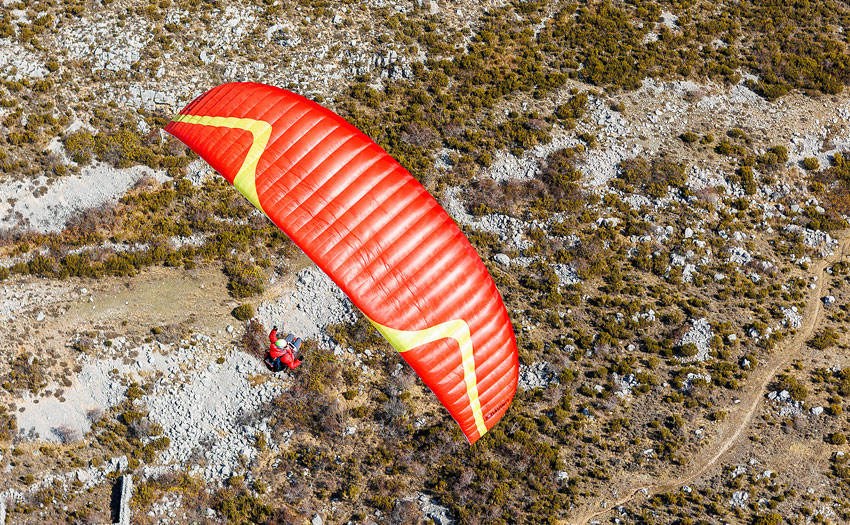 The wing continues its easy handling behaviour when it comes to landing. The brakes have a nice long travel and it is easy to convert speed into lift with the flare. I landed several times with zero wind and sinking katabatic wind coming down the landing field and every time I was able to come to a perfect stop. This is important in the mountains when the landing terrain can be less than perfect.

The Hula is a great mountain wing for those that don’t need the extra speed of higher-loaded wings. I am surprised that they didn’t go for increased weight-ranges from the off as that would add a little more versatility. As it is, it would be a good option if you wanted to try heading off on small vol-biv flights with the extra security of an EN-A and the super low weight of a specialist hike-and-fly wing. It also makes a great choice for an easy-to-fly travel wing that packs small and weighs little but has all the soaring performance of a full size wing.