Full-fat or skinny? Now you can have both. Marcus King flies this unique EN-B

The unique Apco Hybrid uses a double surface at the leading edge and a single skin at the trailing edge. According to Apco it is, “a new category of wing in our sport, with unprecedented flying characteristics.”

We met Apco’s Jonathan Cohn at the Kössen Super Paragliding Testival where he showed us his new baby. “Initially the idea was meant to be a concept wing,” he explained, “[but] the initial results were so promising we realised it was far more than a concept project.”

The result, claims Jonathan, “is the easiest, most accessible wing on the market today”. That’s a big claim, but Jonathan cites the “incredibly easy” inflation and low-speed take-off to back it up. Plus it’s a Swiss Army Knife of a wing: suitable for hike-and-fly, regular flying and paramotoring too.

In the air it is certified EN B and has “ultra stable” behaviour, Jonathan said. Landing, compared with single-skin wings it offers “classic” flare authority, usually a negative point for single-skin designs. 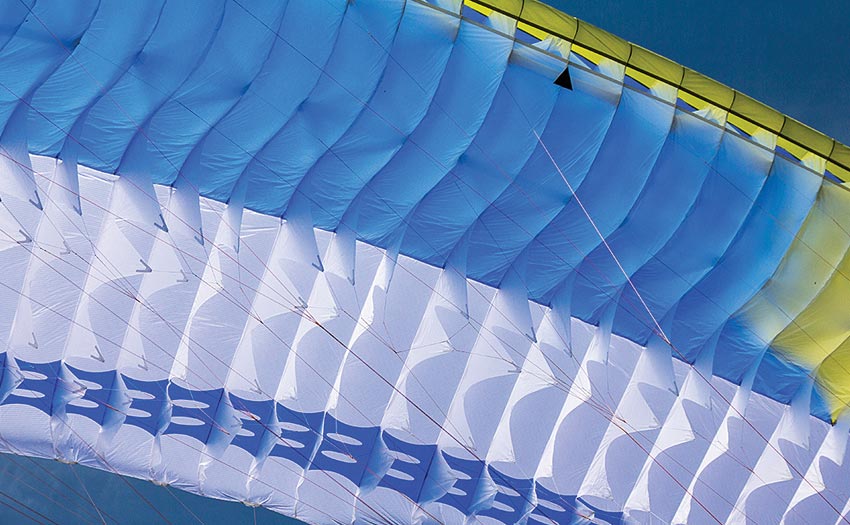 Unfurling the wing the first thing you notice is the single-surface section to the rear. Like single-surface wings this has quite a lot of V-tabs where the lines connect to the fabric.

Another noticeable feature, especially as Apco have used a different coloured material, is the C-support going across the rear of the wing. This is a strip of cloth that has weight-saving cut-outs in it. “A lack of chordwise tension is an inherent problem with single-skin designs,” explained Jonathan, “which is why many of the newer designs have used a few closed cells. This is our solution that overcomes the problem.”

The wing has a relatively high flat aspect-ratio of 5.1. The leading edge material is Porcher Skytex 33g/m2, which is not super light. The rest of the top surface and the lower surface are made from the lightweight Skytex 27g/m2. This combination of materials gives a total weight for the wing of 3.1kg, which we confirmed on our scales.

That’s fine, say Apco, the Hybrid is “not designed to be a ‘lightweight’ wing.” However, Jonathan did confirm that they are working on a lighter version using Skytex 27 cloth, saving another 200g. That version is expected to be an EN-A, which will make it suitable for schools. 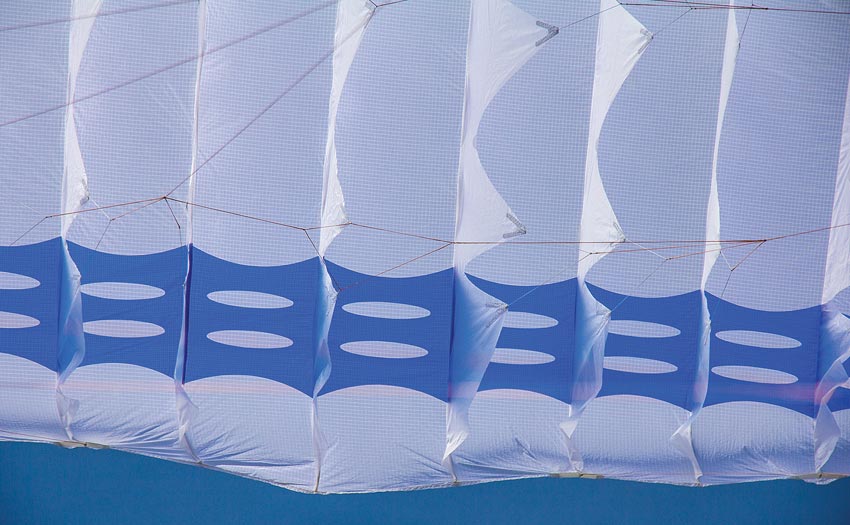 The double-surface section of the wing has an obvious sharknose using shaped rods rather than the more typical two rods. There are also long plastic rods to the rear, used to help support the line attachments.

The downside of these is I would be worried about trying to pack the wing too tightly, but Jonathan assured me they can take a lot of abuse. “They are the same Flexon battens we have been using for fifteen years … No special care is needed, they always come back to the original shape.” 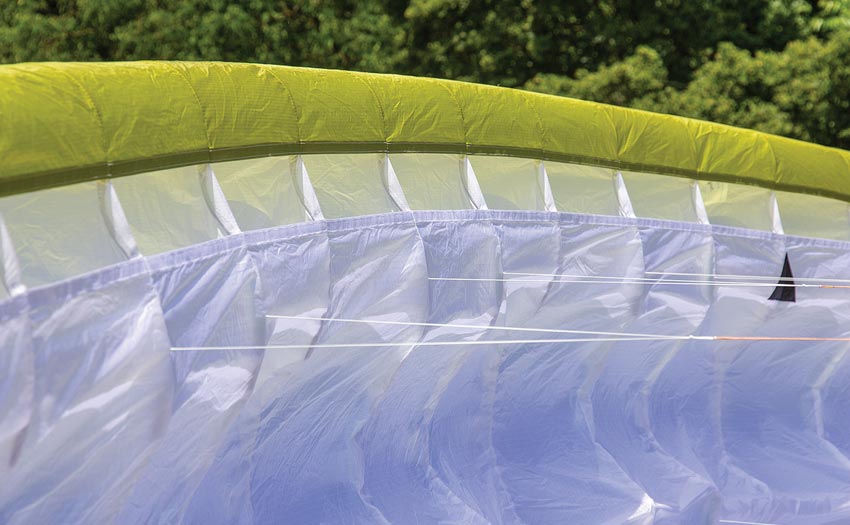 The line attachments on the double surface use Apco’s low-drag system, where the top line effectively becomes the tab and is sewn in to the cell wall. On the glider I flew, all the lines except the main brake line were unsheathed. A paramotor version will have sheathed lower lines for additional protection.

The risers themselves are made from thin webbing, not bootlace Dyneema, and are easy to handle. An interesting feature is the attachment of the outer-A, which floats on a separate line riser with a small metal loop attaching it.

The brake handles are nice, well padded and kept in place by strong magnets and use standard pulleys. The risers are equipped with a speed system. 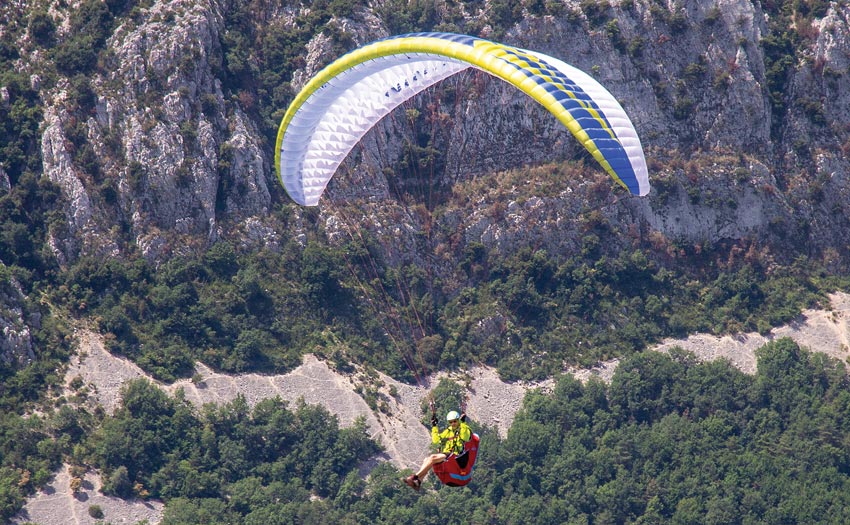 The wing could be a good option for pilots who want a lightweight all-rounder to go places with – for travelling, hike-and-fly adventures and even paramotoring. Photo: Charlie King

On launch, and despite a relatively large number of lines at the rear, it was easy to get the wing sorted. In a fickle wind the wing rose easily and showed no signs of overshooting. A couple of steps and I was off.

With no thermal activity the flight down was uneventful, although I noticed that the wing wasn’t losing out to the other wings around it in terms of sink and speed. Coming into the busy landing field the wing behaved impeccably with a good, easy to use flare. It was easy to see that the Hybrid offered a different experience from a standard single-surface wing.

Back home in France I managed several hike-and-fly trips in varying conditions. In all cases the glider launched impeccably. It comes up easily without overshooting. It just stops above your head. 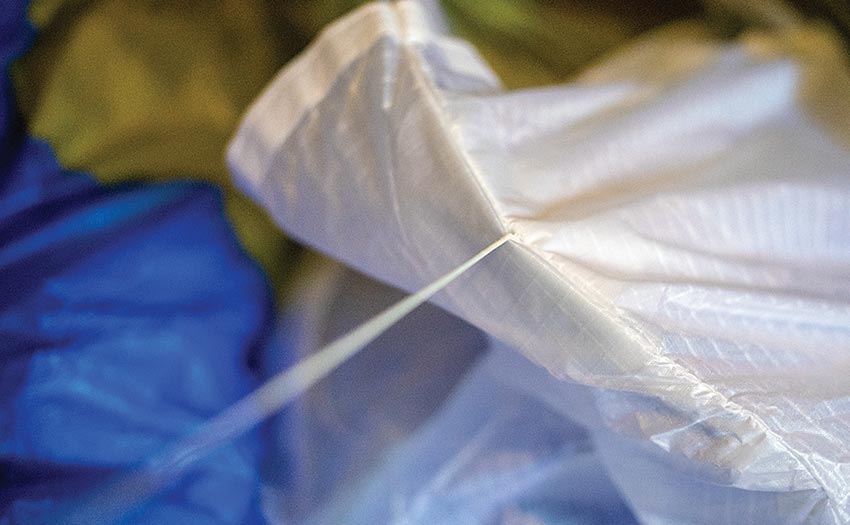 In stronger breezes the wing will rise as soon as you put pressure on the As with your harness. Rear risers keep it sat on the ground. In those stronger winds the glider does come up quickly, but still doesn’t need much correction. In fact it is a really fun wing to play with on the ground.

I was pretty near the top of the weight range and in the air the wing felt stable and secure. There is very little movement at all: single-skin paragliders can make a lot of small pitching movements which feel like they are going to develop into something bigger, but the Hybrid sits securely above your head.

The first part of the brake travel is extremely light, and some may find this slightly disconcerting until they get used to it. However, as you go deeper the pressure mounts up nicely. The result is the wing is relatively agile and the brakes are precise.

On a thermalling day adding an XC harness with reserve took me over the top of the certified weight range and undoubtedly affected the performance. I would have liked to try the next size up in these conditions but it wasn’t ready in time.

From my limited experience then, it felt secure in the thermals. The inertia in the leading edge gave it a nice amount of bite. Once set at a bank angle it needs very little input to keep in the core – it certainly needs much less attention than the single-skin wings I have flown and it is also much more roll stable than a lot of double-surface wings. 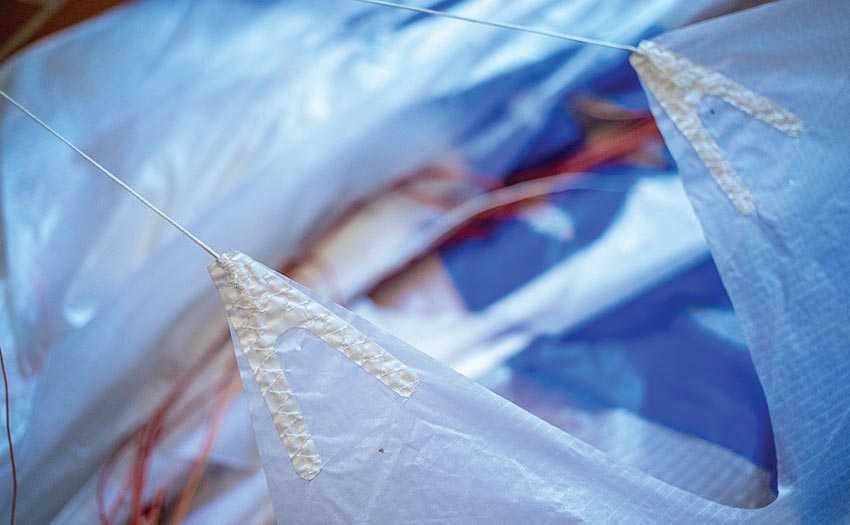 Despite Apco’s warning that it is hard to perform wingovers on, I found that with good timing you could get the wing to go quite big relatively easily. But as soon as you stop the inputs it is as if a brake has been applied on the roll and it settles straight into level flight. You can actually feel the force of the roll deceleration through your harness.

It makes for a wing that I think would be pretty good for learning this manoeuvre on – you will only go big if you use correct technique, and if you feel it getting too much you can stop the input and the wing will stop immediately. 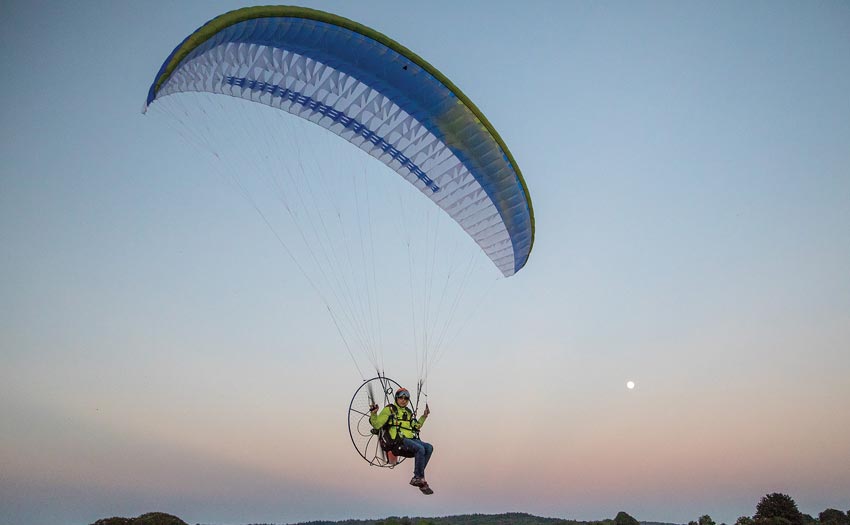 I flew the Hybrid under power with the Parajet Maverick frame and Vittorazi’s new Atom 80 engine. This is a lightweight combination that seemed a great match for the lightweight Hybrid.

I was slightly concerned whether, with my weight, the small motor would produce enough thrust and the wing enough lift for it to work. But taking off in little wind at sunset the wing rose easily above my head and within a few steps I was off the ground.

In the air the wing feels like it is generating a good level of lift so, despite being heavy on it, I didn’t feel like I was stressing the motor. The glider’s great pitch- and roll-stability isn’t affected by the addition of power and it is stable when cruising. I was able to play around close to the ground on it, happily banking around the flagpoles and foot-dragging.

The combination of small engine and light wing would be great for those coming to the sport of paramotoring. It’s easy on the ground and in the air. The Hybrid isn’t the fastest wing around but this is perfect when you are learning and want everything to be slower and predictable. Launches are easy and landings are too, with a good amount of flare. 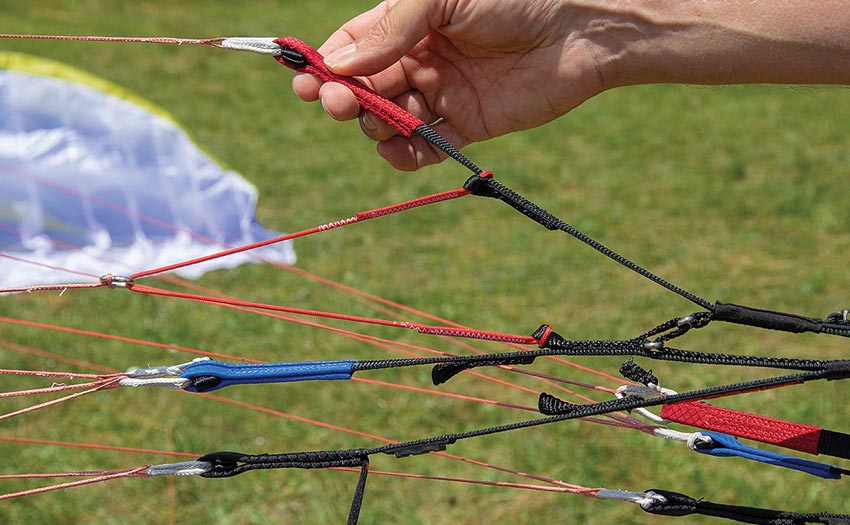 Apco have created an innovative wing that brings something new to our sports. Combining elements of single-surface and double-surface wings means advantages from both. It’s light but made of durable materials; has better pitch behaviour than single-surface wings, combined with great roll stability thanks to the exposed ribs; and it’s easy to launch and land.

All up it makes for a great all-rounder that works well for hike-and-fly adventures, as a travel wing and for low air-time pilots, plus it is super easy under power.

Marcus King regularly reviews EN-B and EN-C wings. Cross Country’s designer, he has been flying paragliders for 25 years. He lives in the south of France near the sites of Gréolières and Gourdon. He flew the Hybrid with a Sky Crux, an Icaro Larus and a Parajet Maverick Atom 80 paramotor.