Easy to launch and fly the new UFO will have you grinning as you run off the hill. Photo: Nicolas Cochet
EN-B, Reviews

In February AirDesign’s social media started hinting that something was coming… from outer space. It was the new UFO (Ultralight Flying Object), their superlight, single-surface hike-and-fly wing, successor to the original UFO which came out in 2016. In March we were honoured with a visit from two of AirDesign’s core team, who hand-delivered two new UFO 16s to our office in the south of France, and came out flying with us. They left one of the wings with us so that we could fly it some more and get to know it in differing conditions. 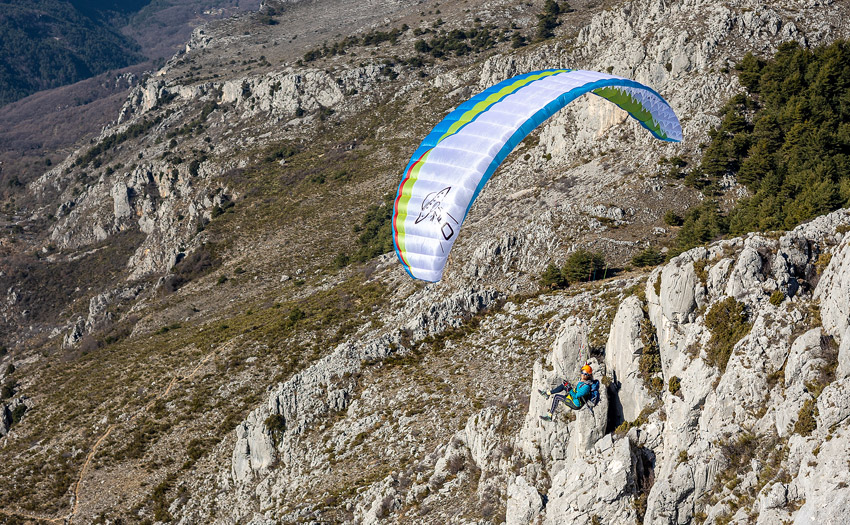 The concept for the original UFO was a light and packable wing, a simple tool for hike-and-fly, and that hasn’t changed. The original UFO was initially released in 14 and 16m2 versions, then 18 and 21m2 sizes followed, with the 21 becoming the first single-surface paraglider to get EN-B certification (It was certified for 75-90kg). The 18 was EN C and the other sizes were only load tested.

Here’s the first most obvious difference: the new UFO is available in all these plus a tiny 13m2 size, and all of them have certification, and for very wide weight ranges. AirDesign have separated the wide weight ranges into Standard and Extended sections, and for some of the sizes these have different certifications. The larger sizes are EN A in the standard range and B in the Extended; the 16 is EN B throughout; the 13 and 14 are EN C throughout. AirDesign’s target audience for the new UFO now includes beginners and schools, which the original did not.

The first size of new UFO to be certified was the 16, for 50-75-90kg, and this is the one we flew. Marcus and Charlie were handed one each, neatly packaged in the tiny UFO Airpack, the mini packing bag specially made for it. Conditions were good so we didn’t pause for groundhandling but went straight up the hill to fly. 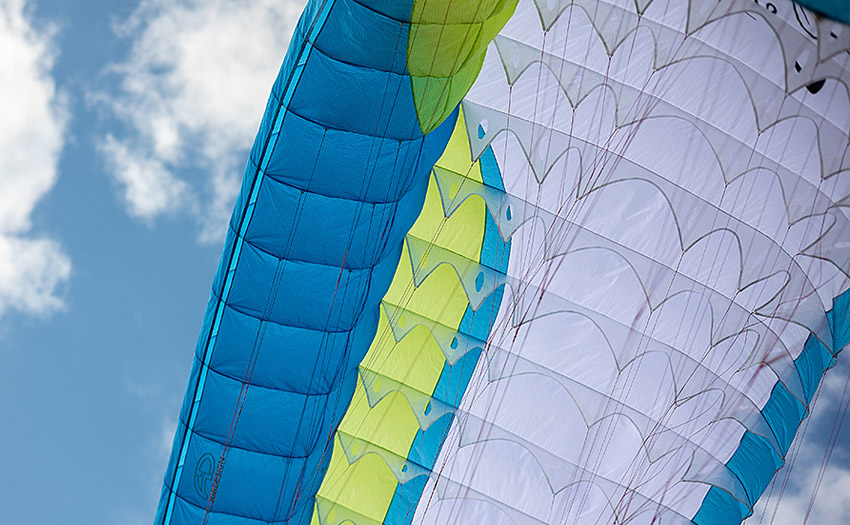 The new UFO has a double-skin leading edge. All detail photos: Marcus King

On unrolling the wing, the most obvious difference from the original UFO is that it now has an inflated section along the leading edge, to perhaps a quarter of the chord depth, which is closed at the back. The original version did not have this. Instead, it had six narrow inflated spars running from front to back, spread out along the span. These have now gone, replaced by Nitinol rods in some of the seams running the entire length of the chord.

The glider is made from superlight double-coated Porcher Skytex 27, and the leading and trailing edges have Mylar edgings. The construction seems nice and robust. The edges of the exposed ribs are folded over and double-stitched and taped to reinforce them. 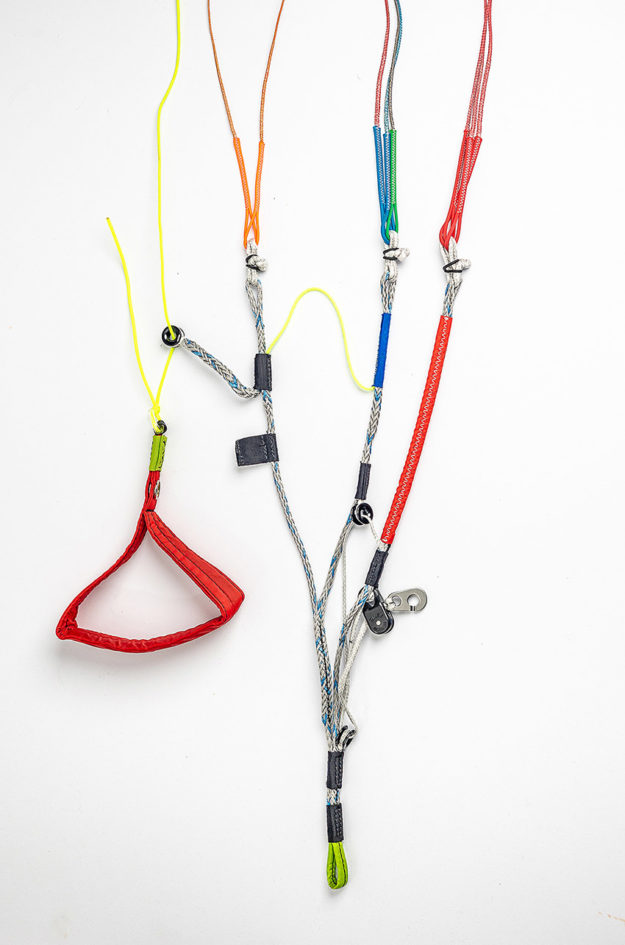 The lines are unsheathed, coloured Aramid, and the brake handles are lightly padded with good solid poppers. Because they are so fine you need to be careful with the lines on rocky launches, and they are not as tangle-resistant as sheathed lines. The lines connect to the Dyneema rope risers via softlinks. Plastic balls on the brake lines act on the rear risers when you brake hard, for a good landing flare. It’s designed to be used with a speed system, and has Brummel hooks to clip in to. The Nitinol rods that support the leading edge form closed rounded triangle shapes.

Our first flights were just 100% fun. Easy launches into perfect conditions. We all flew more than once, so the early launches were into afternoon thermals, and we were able to climb and have fun. We raced back up the hill again for the end-of-the-day calm and it was just pure pleasure. Three words to sum up those first flights? Easy. Lightweight. Fun.

In the landing field packing away, Nicolas from AirDesign demonstrated how the Nitinol rods can be squashed and bent, and spring back into place afterwards. Then he started at one wingtip, and with expert flicks of the wrist, concertina-d it back and forth to the middle of the wing. We did the other side. It’s so small and there’s so little cloth, that you can do this without it being too much of a handful.

When we met in the middle, we folded each tube inwards in the middle, so all the lines were neatly tucked away on the inside, and you had two neat, narrow sausages of fabric that together were the width of the bag. This we folded up in sections to fit the length of the bag, and popped it inside. It goes in easily and zips up without forcing. Voilà – a daypack (UFO Airpack) sized wing. Then Nicolas pointed out the black strap on the bag. It’s there so that you can fold the whole thing in half again and strap it together, then it fits into a really small daypack.

Over the next six weeks, both of us flew the UFO, a lot! Merging all those flights together, and taking into account we both flew it at different loadings, here’s what we thought. 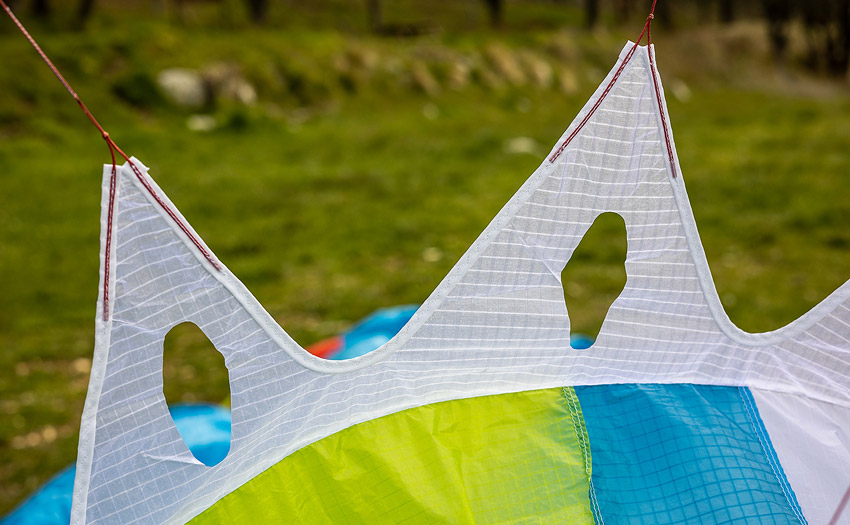 Exposed ribs are well finished, folded over and double stitched

I seemed to get to fly the UFO on the stronger days when Charlie decided running was the better option. Speed for me wasn’t a problem. I estimated the trim speed at close to 38km/h when using the GPS and flying in opposite directions. This agrees with AirDesign’s speed chart.

On launch in stronger winds the wing will jump above you quickly with the slightest pressure on the As. There is no tendency to overshoot but you have to be a little more subtle in your brake inputs as it reacts quickly in roll. Letting it fly forward you are quickly lifted off the hill, and it seems to generate lift early and efficiently. I noticed how lifty the profile is in ridge lift where I was surprised how easy it was to maintain. It feels almost surreal to be climbing on a 16m2 wing.

In the air, as with any light wings, it does move around a bit but it is very controlled and feels comfortable. I flew on a thermic day and was able to stay up, but the work level felt quite a bit higher than on a standard wing as the initial pitching movements are fast, but actually, as I have found with other single-skins, the movements aren’t actually that big. In smoother air the ride is very comfortable, and I was more than happy to let it fly on its own while I took photos.

One of the issues with single-skin wings has been the lack of landing flare. Recent designs have improved on this aspect and the new UFO certainly makes landing easy. Brakes feel normal until the small plastic ball hits the ceramic ring, then you are pulling the rear riser down so get a harder feel. Most of the time, especially if given some speed on the way in, going to this point was enough, but if you need a bit of extra authority it is easy to give a bit of pop to the flare just as you touch down. With this I was able to pull off upslope landings and kill the wing on nil-wind landings without any need to keep running; perfect for rocky landings. 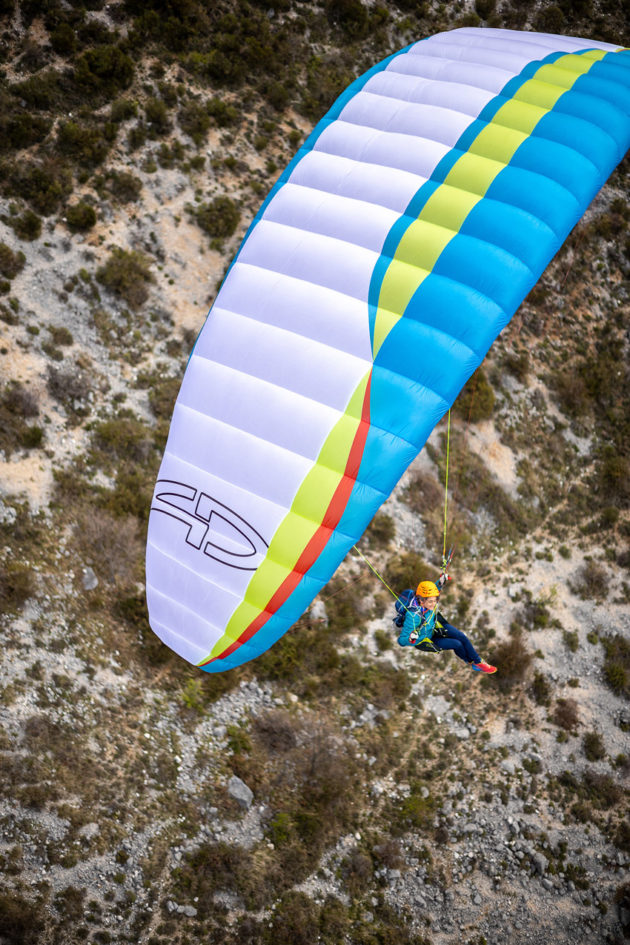 As with all light and single-skin wings it does move around, but it is controlled and feels comfortable.

Charlie, 62kg all up

Most of the time, my flights were in light early-morning or early-evening conditions. There are no special launch techniques with the UFO. You can use the A’s, which are not split, in the usual way for forward and reverse launching. In gentle winds, the light sail really does float up, so easy. It’s super-keen to get into the air. You can soar the UFO in light lift, and happily climb in thermals. It’s a brilliant tool!

I had a couple of stronger-wind flights too. One was on a low-cloud day with a bad forecast when we had decided to hike up to the high launch anyway, “just to see”. It was the weekend and would be a nice hike. We thought the strong wind might prevent us from flying, but it turned out that the low clouds were more of an issue as we arrived to find clouds swirling in and out of launch. But it was looking surprisingly possible.

We descended a few metres to a more sheltered launch where the wind felt perfect, and then the clouds parted for us too. I was in a hurry to get off quickly before we got closed in again. I only thought about launching, touched the A’s and it came up quite fast, I turned, quick scan and was off. So easy. Maybe a bit too easy. I need to do some stronger-wind groundhandling practise with it to make sure I’m actually in control and properly checking before committing to aviation!

On that flight I felt I could have done with a bit more speed, and I should have had a speed bar connected. I flew up and out, feeling a little bit at the whim of the wind until I was out of the lift band and could relax, then weave a route down between the clouds with Marcus. It was a fun micro-adventure!

The turning on the UFO is almost all in the brakes, with a little response to weightshift, but the handling is really lively, sharp and direct. There is plenty of feedback but it doesn’t feel especially nervy. It’s super-fun to thermal. Speed wise, it does feel slower to me than, say, the Pi 3. AirDesign’s table says 32km/h for the 16 at 60kg, though we usually hike-and-fly in mellow light-wind conditions, for which it’s perfect and just really fun.