Brian Steele gets to grips with the latest update to this classic EN C Sports class glider.

Advance have always said the Sigma is for ambitious XC pilots who want performance with passive safety, predictable handling and quality finish. As such, the glider has always had a loyal following.

Common complaints about some of the earlier models though were that the leading edges were too hard and, while that gave a feeling of stately progress, there was little warning of impending closures. Compared to other manufacturers, Advance were also slower to produce lighter wings. In 2008, for example, a small Sigma was around 6-7kg while wings from Gradient, Ozone et al were 4.5kg to 5kg.

The Sigma 9 (2014) and 10 (2017) made great steps forward in handling and performance, and lighter construction has definitely been embraced. The Sigma 10 especially was a great step forward – size S weighs 4.75kg – and is my main personal wing. I wondered whether the new Sigma 11 would be a big step forward from the 10 or an incremental change. 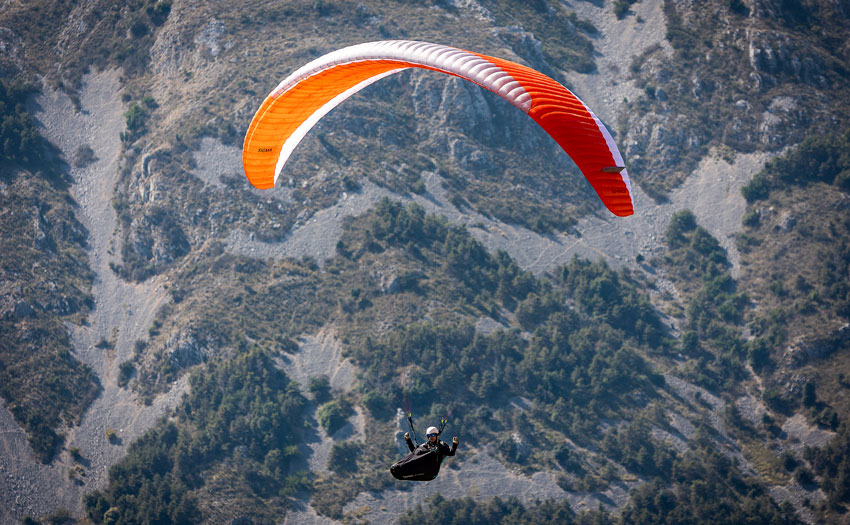 Silas Bosco, former head of design at Advance, started off the design of the Sigma 11 before handing over to Christian Proschek, designer of Advance’s acro wing the Omikron. Rather than tweak the Sigma 10, a completely new profile was designed and the team looked at the best way to reduce weight, improve pitch stability and to further improve handling.

The main design changes were a rethink of the internal structure and use of lighter internal materials. It was important to ensure the longevity of a normal XC wing, so the outer materials are medium rather than light cloth. Skytex 32 is used on the upper and lower surface; Skytex 38 on the leading edge.

As a result it feels more robust than a typical ‘lightweight’ EN C, and indeed that is what Advance have gone for – a semi-lightweight design. They will not bring out a specialist lightweight version of the Sigma 11; the Pi 3 is Advance’s specialist hike-and-fly glider while for ambitious pilots there is the Omega X-Alps. In short, the Sigma 11 is aimed at being a good all-round XC glider with “added lightness”.

That means 12mm risers, colour-coded upper lines, webbing that connects B and C risers for C-riser steering and magnets for the brakes. 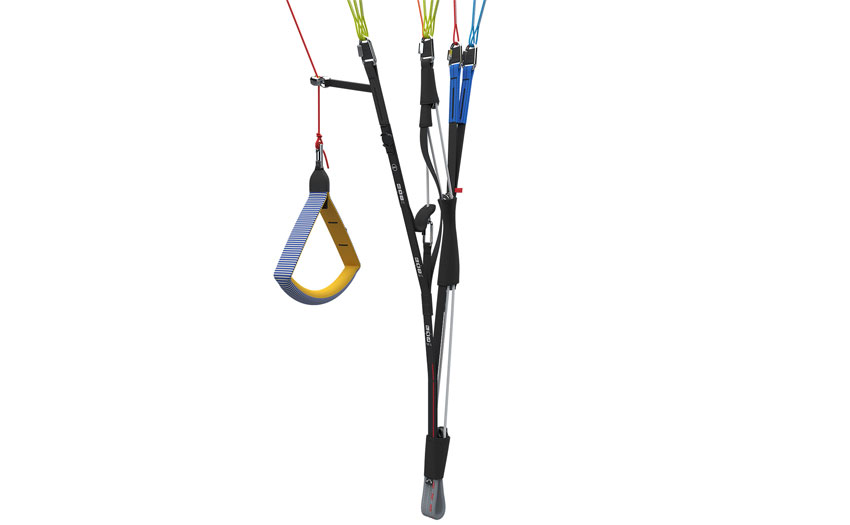 The leading-edge profile looks very clean, with a slightly aggressive sharknose. At 22m² the wing looks pretty small and sporty on launch.

What Advance call 3X3D shaping (their 3D shaping) on the leading edge allows a clean profile without the need for a huge cell count or over-abundance of long rods. Compared with the Sigma 10 Advance have reduced the cell count by one (65 vs 66) and have reduced the Sigma’s flat aspect ratio very slightly: 6.07 vs 6.16.

Line checks and launch prep were super-easy with the coloured lower lines and risers. With a decent breeze the wing launches easily using only the centre A-lines. In lighter conditions, using both risers helped. The wing comes up progressively with a bit of input required to stop the overshoot in stronger thermic conditions.

Once overhead the wing is obedient on brakes and harness pressure only, with not much footwork required. I was impressed with how the wing coped with being pulled up off-centre. The deflated side would come up and progressively inflate without too much encouragement and no snaking – definitely good behaviour for tight hike-and-fly spots. 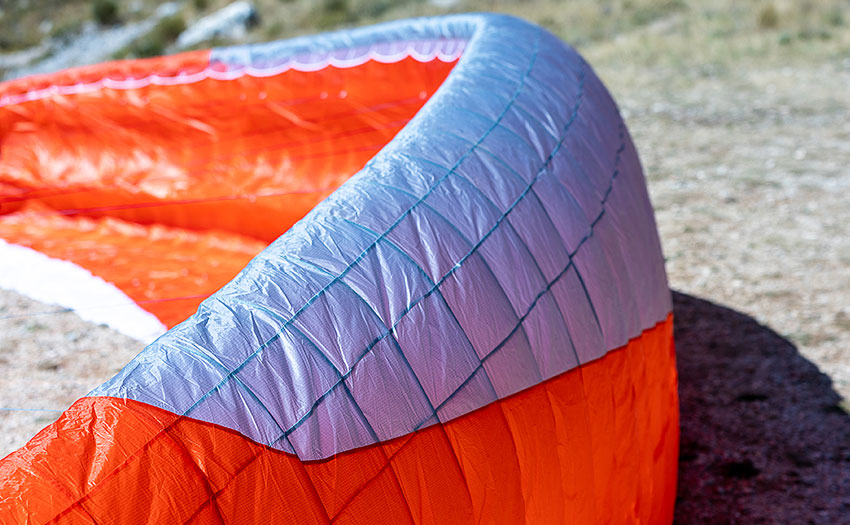 The 3X3D shaping on the leading edge for a smooth profile

I flew the glider in summer conditions at my local site in France, a south-facing ridge, plus I did a six-hour 100km flight from Saint André-les-Alpes. On that flight we had everything from strong convergence to lee-side turbulent thermals. It was a difficult day where every glide saw us down low scraping our way back from tree height to cloudbase. It was a day where if your glider was not your friend you would quickly lose confidence and glide off to land.

My main first impression was that the wing was much more obedient and fun than previous Sigmas were, including my own Sigma 10. At first I flew quite cautiously but over three hours of thermalling and transitions the impression of speed and stability at half-bar was what grabbed my attention.

Brake response was a lot sharper than previous models and I’d say is one of the best among the EN-Cs I have flown recently. When a small bullet of a thermal arrives it is easy to hook into it and bank up.

I think this is one of the most important changes to the feeling of the wing as previous models felt like they were more about comfort than speed of response. Advance told me a few things contributed to this change, but the main ones were the increased arc in the wing and the slightly smaller size. The brake and weightshift response also gave me confidence when scratching close to terrain. 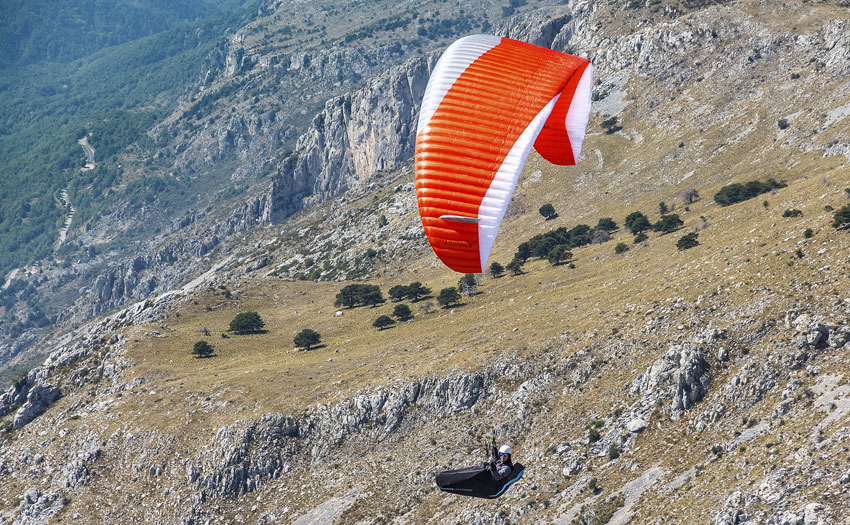 Climbing is a delight. It has the same efficient feel as previous wings when you want to turn flat. However, the improved turn rate and agility made me feel much more in control when I wanted to bank up suddenly.

There is very little flex unless you are really starting to take liberties. The spin point arrives predictably and a quick hands-up sees you flying off with no drama.

On the longer XC flight we had some strong conditions low down and some moments where I had to fly quite actively. As soon as I was high I wanted to relax and get my breath back. I found that the Sigma 11 has fantastic pitch stability at speed and, despite its small size, it never felt bullied by the strong air. The fact that even on a rough day I took 90 photos tells me I was comfortable.

At speed there is the familiar riser marking common to most Advance wings, which shows how much bar you are using from 0-100%. I spent a lot of transitions on ridges at 50% bar or more. At first I wasn’t sure about the lack of plastic C-handles but using the webbing between the C’s and B’s worked well. I am slowly getting used to the rear-riser technique after many years of traditional DHV2s and EN-Cs, but the wing definitely feels more efficient on long roller-coaster ridge lines and transitions when you don’t go near the brakes and optimise the wing using the C’s. To get the most out of the Sigma you should progressively build up your rear-riser control skills. 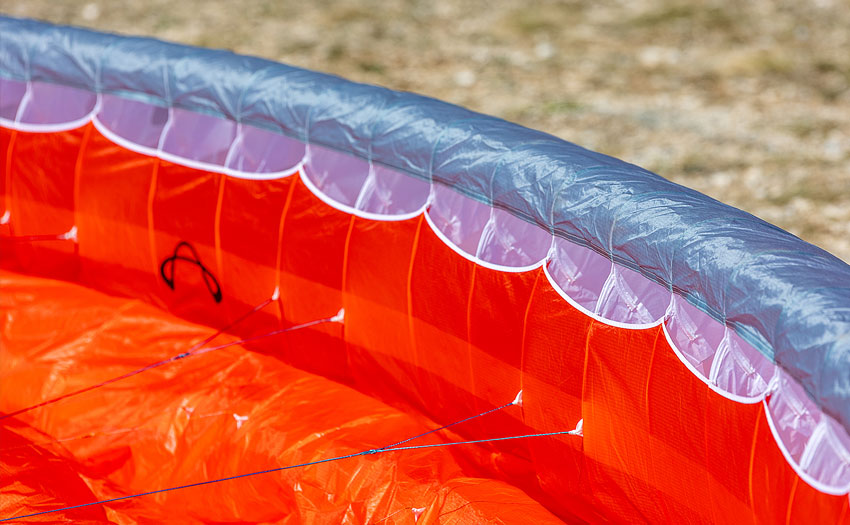 Advance had some feedback that the Sigma 10 had some aggressive frontal recoveries in real-life flying. I am not an SIV instructor or test pilot but wondered whether I would notice a difference in the new wing.

The first thing I noticed was improved leading-edge feedback at both ends of the speed range. Second, while the wing has a more aggressive sharknose the breaking point for a frontal seemed to arrive predictably and softly.

The improved feedback at speed meant I felt more confident on bar. Even at trim the wing was already cutting through the air. Based on my GPS, full bar seemed to easily add 15km/h and gave me that go-anywhere feeling when chasing vultures and wings.

I only experienced one proper frontal. I was tired after six hours’ XC and was pushing home on full bar. The wing recovered with very little dive or deviation and a quick transition from parachutal to normal flight. I backed off my speed a little, but I had forgotten about the closure a minute later. No wing is immune from frontals but the pitch management, feedback and of course recovery seem to be very good indeed and better than the Sigma 10 in my experience.

Asymmetric collapses are soft and recovery is no drama if you are used to flying EN B or above. Recovery was quicker than on some EN-Cs I have flown recently and definitely less sticky than other sharknose wings or wings with heavier battens and rods in their leading edges.

I am used to Sigmas flying well in a straight line, but this is one of the first Sigmas that encouraged me to have fun and to do energetic wingovers. I’m not an acro pilot but a few times when I was bored of going up and down my local ridge I had a lot of fun spiralling down, doing wingovers and generally messing around. Spirals are easy to modulate with small brake inputs. Wingovers and asymmetric spirals are a real blast. The agility of the wing overall is definitely 5/5. 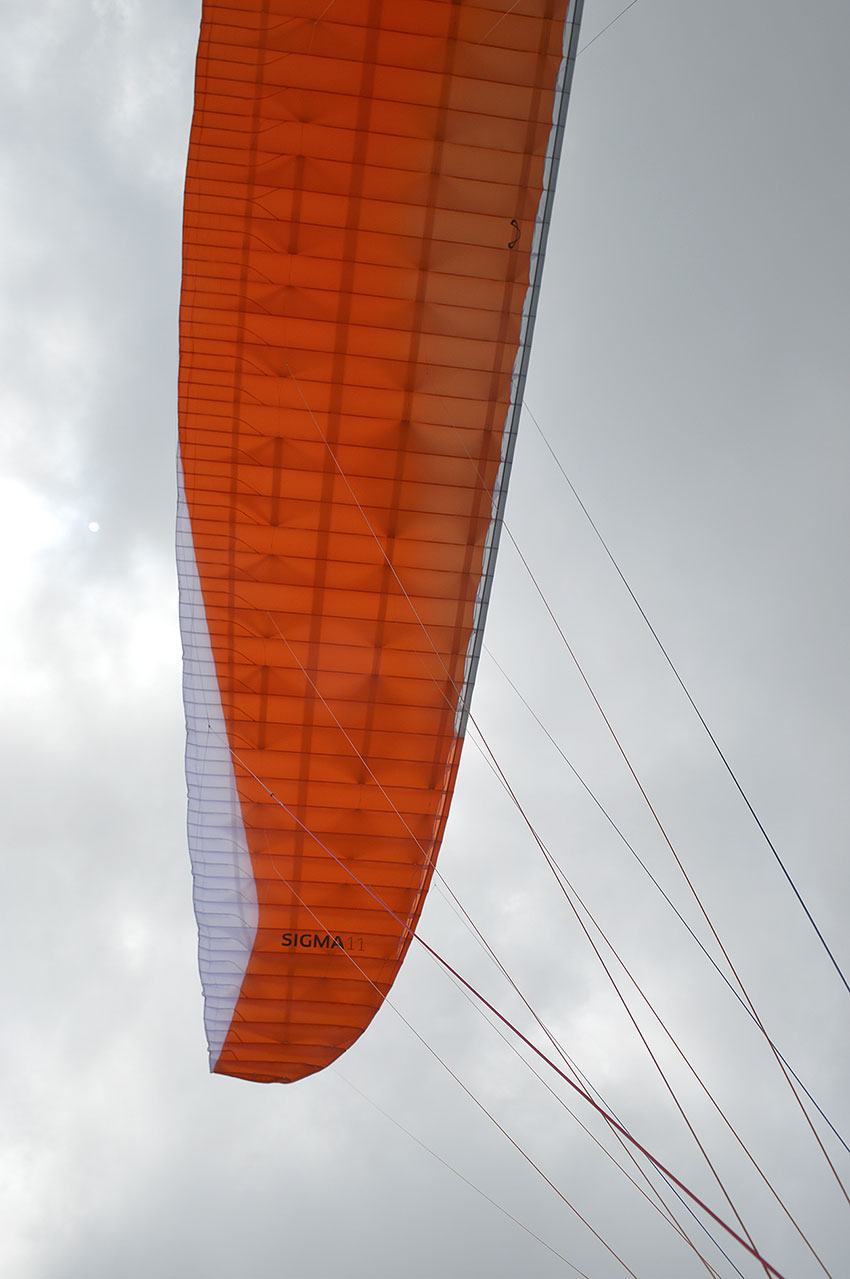 Looking up at a clean, sleek sail. Photo: Brian Steele

For many years I saw the Sigma as a solid performer but not that interesting in terms of fun, personality and feedback. So I wasn’t expecting to say that this is one of the best and most fun all-round XC wings I’ve flown.

As a regular XC wing it ticks all the boxes and with the weight not being much different to some other manufacturer’s specialist ‘light’ versions of their EN-Cs I could see myself using this as an excellent and dependable vol-biv wing.

When not going XC the wing has a toy-like feeling that has been missing from previous versions. This makes even a regular day soaring up and down your local ridge more fun. If you have had doubts about the Sigma series before, you will be pleasantly surprised. Advance have done a great job with the Sigma 11.