The Iota DLS is designed to be durable and lightweight, a balance between cutting weight and bulk, and usability. Photo: James Pagram
EN-B, Reviews

Why is the new Iota called the Iota DLS (Durable Lightweight Structure) and not simply the Iota 3? “A lot of people are calling it the Iota 3 DLS,” says Advance’s Valéry Chapuis. “It’s the third Iota, yes, but we wanted to focus on our new design and concept of creating durable and lightweight wings. We wanted this concept in the name of the product!” That settled, on with the review.

The original Iota was released in 2015 and was big news at the time because Advance don’t often launch new models. Compared with some manufacturers their range is quite reserved: only eight models on their website at the time of writing, compared with 21 for Ozone and 15 for Gin, for example. While they do have a dedicated hike-and-fly glider (the Pi 3) Advance don’t have a single-skin, a competition glider, speed wings or dedicated paramotor wings. They do of course have a big range of harnesses – 12 in total.

The point is, in wings at least, Advance’s focus is on making cross-country paragliders for XC pilots. That focus pays off. There are plenty of pilots who would fly nothing else, and fans love their reputation for refined handling and excellent build quality and finish.

The original Iota was designed to fill the gap in the Advance range between the Epsilon (standard B) and the Sigma (sporty C). As such, the Iota is aimed at pilots who want to fly a ‘high-B’ – that is, a good XC wing with lots of passive safety.

It’s a crowded and demanding market, but Advance created a winner in the original Iota. It was followed by the Iota 2 in late 2017, and the Xi – a lightweight high-B with the same spec as the Iota 2 – arrived a year later. In January this year Advance announced the Iota DLS, but industry-wide supply problems meant the first wings didn’t arrive until June. 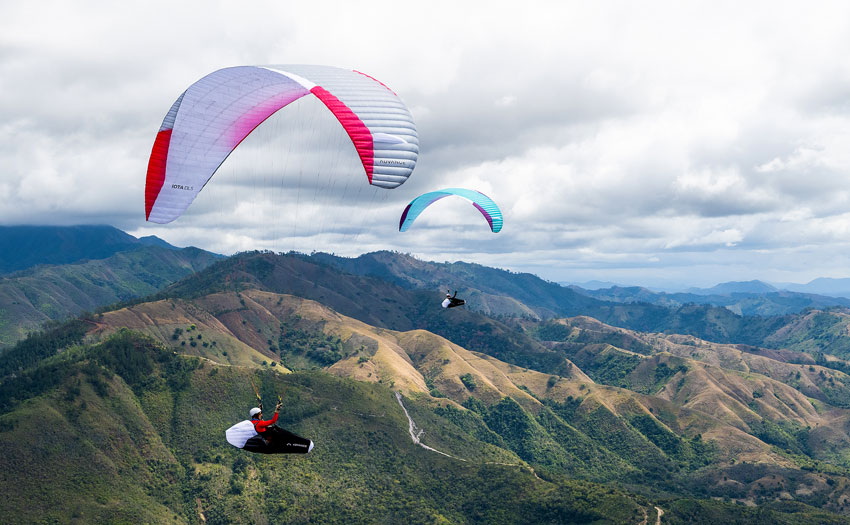 In the air it is designed to be pitch stable, the smooth leading edge pushing comfortably through turbulence
Photo: Adi Geisegger

It is a 3.5-liner – Advance decided not to go for the 2.5-line hybrid design, where the tips have two lines and the centre has three. Why not? “With the B gliders you don’t have a very high aspect ratio, and you have a bigger chord than a C-wing or a D. So if there are not enough lines the profile is not maintained, and you need to put long plastic rods in the glider to compensate,” says Valéry. 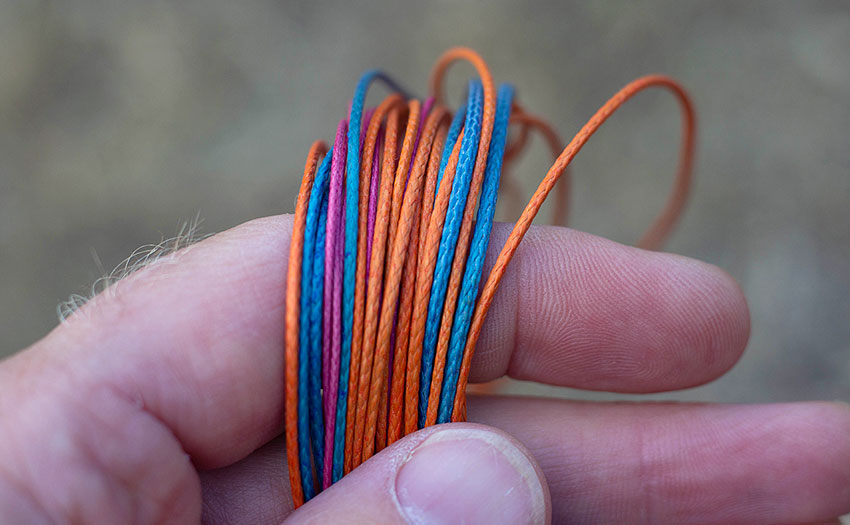 “Also, when making collapses for certification, when there is no line between the last C-line and the trailing edge the glider is much more aggressive in collapse, because the lines maintain the profile. We reduced the overall amount of line, but not the number of attachment points. It’s the best compromise for this type of glider. ”

The quick-start guide puts it like this: “C-handle steering is more efficient and direct than active flying by using the brakes. You need practise to acquire effective and instinctive skills at C-handle control. Put the time in.” That made me laugh. Fortunately, it’s an enjoyable way to spend your time – it feels comfortable and natural and the brakes are always still there when you want them. (See Rear-riser control for EN-B pilots in XC230 for more on that.) 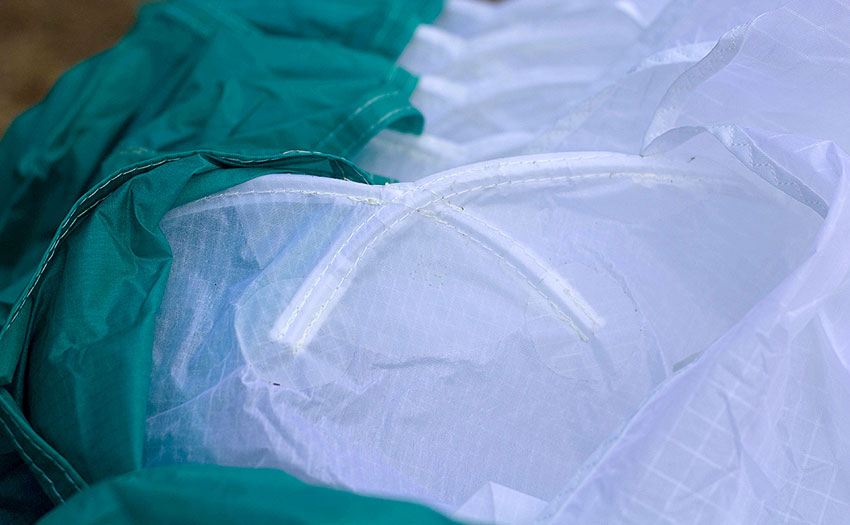 The DLS in Iota DLS stands for durable lightweight structure. It’s about saving weight in the design where it can be saved, but not compromising on durability. So the leading edge is made of Skytex 38g fabric because it’s a high-stress area; the top surface is 32g because it gets wear and UV; the lower surface is 27g because it doesn’t. Inside, the ribs are made of a mix of 40g and 32g Skytex.

The same attention has been made to how the internals are cut. So tension straps, which span the glider tip-to-tip are cut in a ‘bone shape’, saving a claimed 22% surface area (and therefore weight). All the internals have numerous optimised cut-outs too, saving weight without compromising strength.

Lines are colour-differentiated Edelrid Pro Dry, made of Aramid, and attached to the risers using maillons (not softlinks). The speed system uses Harken pulleys. Optional lightweight risers can save you 150g.

However, it doesn’t feel like a lightweight glider. Coincidentally, before flying the Iota DLS I had a couple of small mountain XC flights on my Advance Xi (3.4kg-4.3kg) and that really does feel like a lightweight wing with its softlinks, lightweight brake handles and risers, and mainly 27g material. My point is that Advance have done a good job of optimising all the materials so the Iota DLS is light, but feels like a standard wing when you unpack it on launch. 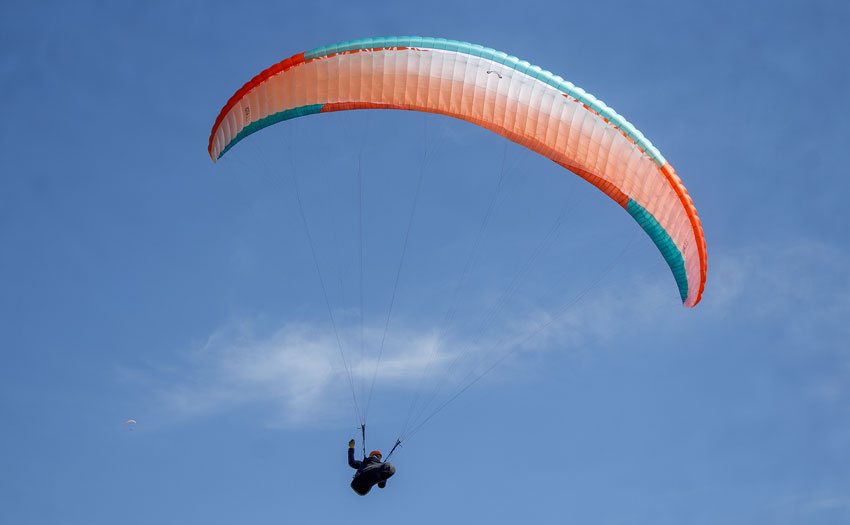 The glider has an aspect ratio of 5.6.. Compared with the Iota 2 it has more arc and 4% less line, meaning it should be nimbler in the turn. Photo: James Pagram

My first flight was an hour’s soaring. Sorting the wing was a breeze with its easy-to-handle (and see) lines. Reverse launching was straightforward, with no over-shooting, and I was quickly in the air. I was flying at the lower end of the weight range and my first thought was “Long brakes!” Advance say on no account change the brake length, so I didn’t, but it did mean I flew all the time with a full wrap. The reason for not changing the brake length is so there is slack in the system at full bar. (Later Valéry said you can adjust by “2-3cm” but not more.)

It was a mix of wind and very light thermals. It took me 20 minutes to find the right mix of brake travel and weightshift to make a good tight turn. This was down to me being careful about applying too much brake with wraps on but I had nothing to worry about: there is loads of brake travel before you get anywhere near the stall point. Once I found the sweet spot in the top third of the brake range I was away.

A week later I was in 4-5m/s thermals and it was a blast. It was drought conditions in southern England, and it was baking. Climbing out from launch in a steady 2m/s climb I went straight up, and up, and up, climbing for 1,300m through a couple of different choppy shear layers until I hit turbulent air near base.

All the time the glider behaved as you’d hope. In the manual they talk about it being more pitch stable than the Iota 2, which you might think sounds dull or neutered. But in fact it means the ride through turbulence is softened out, like good suspension in a car. You can still feel the air, but you flow through it more rather than constantly react.

When the air did get messy at shear layers, I just flew actively, breathed out, leant back in my harness, and let the glider fly. It cut through the air and didn’t get kicked around, pitch back or have any hint of a collapse. Very reassuring.

Meanwhile, in the climbs between the shear layers it turned beautifully smoothly, requiring just monitoring on the outside brake; certainly there was no diving into the turn or being pushed out. It thermals, as they say, on rails. At one point I looked at my real-time track on my Oudie and thought, “Those are the smoothest circles I’ve ever seen on that instrument.” 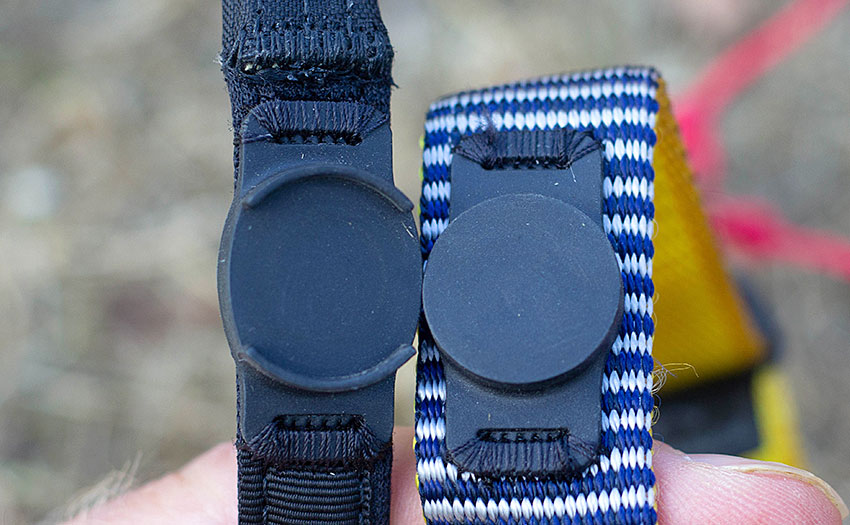 With a genuinely unprecedented 3,000m cloudbase predicted for a Sunday the hills were alive with pilots squeaking with excitement. (The UK rarely sees base above 1,800m.) I was one of them. The plan was simply to fly all afternoon, take the climbs high, and hit that magic figure. By default I ended up flying a 75km flat triangle, with a 20km into-wind leg.

Thoroughly dialled into the thermalling capability of the wing and trusting its security I had no nerves about scratching around the stable, gusty hillside as the day started. That sense of security is something really valuable in a glider.

Later, reaching 2,200m over the back, for the next 800m I had “do your scratching high” as my mantra as the climbs petered out. That meant lots of slow climbing on light brake as I worked hard to get closer to the nascent cumulus starting to pop high above. In air like this in the flatlands it can sometimes be a good play just to point in the general direction of where you think lift might be, go hands-up and see where the glider takes you. And sure enough, I kid you not, it turned 45 degrees on its own and took me straight into a climb!

The bar is fully usable. With a crosswind and then downwind leg I spent plenty of time using the bar. With the bar comes the rear-riser control. The manual is right: control is much more direct, and it’s fun. The pull is smooth and well-oiled and there are no sticking points.

Later in the flight as base rose even higher, I needed to use big ears and bar to escape my climb. With no very great style I hauled on the dedicated big-ears line, whacked them in, stood on the bar and weightshifted away for 90 seconds until the screaming lessened on my vario: very straightforward, and again a usable, dependable technique for escaping an area of strong lift. 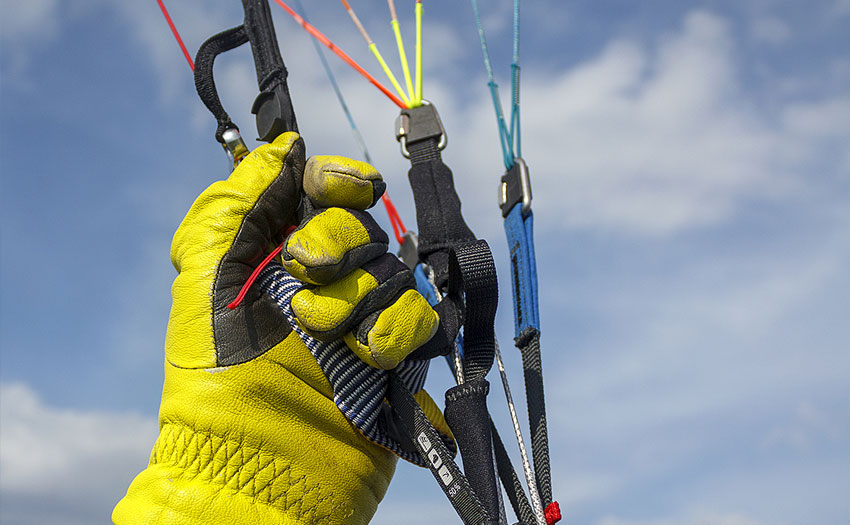 The rear-riser control system is a hammock for your hand, not a toggle or bar. It’s comfortable and intuitive

Advance know what they are doing with this class of wing. Rather than pack it full of features and squeeze them all into a B-class glider they have thought about what an XC pilot wants and delivered that. So it’s light but durable, user-friendly with its lines, thermals beautifully, handles very nicely and has a fully-usable speed bar and rear-riser control system that will inspire confidence in even the most tentative of pilots.

In the right hands the wing will easily manage very long XC flights. (Advance team pilot Manuele Dondi, for example, racked up six 200-250km Alpine triangles on his Iota DLS in July and August and is leading the Sport class in XContest). In short, in both looks and design this is a very smart glider: well thought out and designed to deliver. Plus, it has that magic ingredient: it’s loads of fun to fly!

Advance say: “The Iota DLS is the high performance XC specialist – through and through”

Ed Ewing flew the Advance Iota DLS (29) for 12 hours thermalling and XC in the UK flatlands with a Supair Delight 2 harness at 110-114kg all up.