UP factory pilot Mads Syndergaard turns his attention from the Nordic Open, which has just finished in Portugal, to the forthcoming World Championships which start in Piedrahita in two days time. He deliberates the concept of and quest for ‘more safety’, and ponders whether the new rules are likely to deliver it. 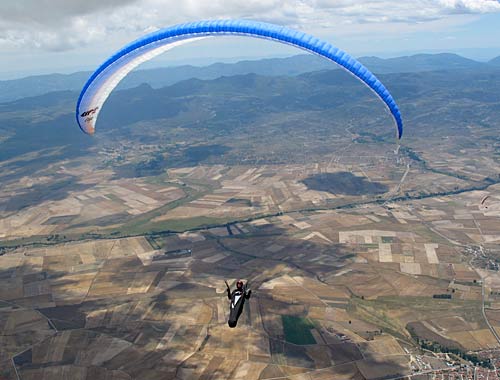 Denmark's Mads Syndergaard prepares to take his UP Edge XR into battle at the Paragliding World Championships in Spain. Photo: Nick Greece

Pilots are gearing up to head to Piedrahita for the ultimate two-liner battle. There’s a pilot list on the comp website, but it seems to list everyone who has ever dreamt of entering the event, no sorting at all, which makes it hard to know who’s actually coming and who is not.

One thing the list does have though is glider names, and I’m willing to risk an arm and a leg postulating that there has never been a big FAI event with as few Serial Class wings as this one – everybody and his uncle is on a brand spanking new two-liner…

This brings me to the new rules which have been put in place for this event; those of you in the know can skip this part, but for the rest it may be worth quickly going over them so you know the score: Basically the FAI and a lot of other important acronyms have been pushing for more safety in comps. A good thing, I hear you scream, but there are some problems with this sort of lobbying. Like, more safety than what? It poses that question which nobody really wants to answer, let alone ask, namely “what is an acceptable accident rate in our sport?”

Everyone seems to implicitly say “0%” – but that is never going to happen, something which even the most rabid safety advocates probably realise in their more lucid moments. So, because this hasn’t been quantified, indeed can’t be quantified, we’re down to bungee statements like “more safety”. This has led some of the finest minds in our realm to try to come up with something that will offer “more safety” although the actual safety problem hasn’t been identified any more scientifically than “there are too many accidents”.

The something that the great minds have created is a new set of rules that seek to address some issues that may or may not be related to the accident rates (bear in mind that no one has actually made any usable statistics about this, so there are only opinions, no facts, about what is wrong with the game).

Among these new rules there are some actually quite sensible ideas, not least the one about comp wings having to have lines that will hold. The flipside of the new rules however is that ONLY new two-liner comp wings, and the odd Boomerang 7 (ironically a three-liner with a bit of a reputation), are certified to fly in the 2011 Worlds – wings that were perfectly alright for the 2010 Europeans, and which were well-loved by their owners, are now suddenly off-limits, meaning the few manufacturers who actually have a certified two-liner have made a ‘killing’ selling brand spanking new two-liners to all and sundry who have made it onto their respective national teams.

I am in two minds about this – on one side the new two-liners really are great machines to fly, and they are fantastically stable and tuck-resistant, even going at full bore through active skies. A careful pilot could probably fly a new two-liner for years and never have an issue with the darn things – in fact, last season was proof of that, with a phenomenal number of hours logged on the R10, by pilots high and low, and remarkably few incidents. BUT once they bite, they do seem to bite quite hard.

So is it a good development that these are the only wings one can fly in this comp? I don’t know – I suspect not, but with the reputation that Piedrahita has it would be almost too easy to say “there will be incidents” (because there will) – but will these be glider-related or site-related? We’ll probably never know for sure. One thing I will chance a bet on is that either way the incidents will be used by representatives of every persuasion to argue their case, be it “EN D only”, “free the Open Class”, or anything in between.

But from my point of view, if you want to avoid accidents in comps you need to ban comps – simple as that.

Mads Syndergaard, writing from Serra da Estrela, Portugal, where we had two accidents today among a very select group of pilots, one on an EN C wing and one on a two-liner.

If I come across a list of pilots actually flying in this Worlds I’ll be back shortly with a shortlist of whom to watch in the event, stay tuned!”