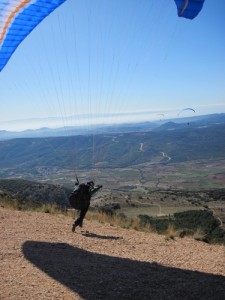 Registration for the first International Women’s Paragliding Open has opened. The competition will be held in Ager, Spain, 21 – 28 August 2010 and is expected to attract women from around the world.

It will be first time an all-female paragliding competition has been sanctioned by the international airsports governing body, the FAI (www.fai.org).

Organisers expect around 80 women pilots to converge on Ager for a week of high level competition and learning.

“The goal of the Women’s Paragliding Open organising committee is to attract as many pilots as possible,” Klaudia Bulgakow, one of the organisers, said.

“So, during the event we’ll run evening seminars on subjects that are pertinent to female pilots including how to fly competitions, staying safe while flying, the right equipment, and motivational training.”

Set in the foothills of the Pyrenees, Ager is a well-known flying site and has been used by pilots for 30 years.

It was the venue for the 1995 FAI Hang Gliding World Championships and has hosted several European and national paragliding competitions as well as the Paragliding World Cup.