Jean-Baptiste Chandelier is the filmmaker behind Light Line, Urban Side and Hey! His latest film, Touch! is a spectacular tour of Santorini in Greece, the Aiguille di Midi above Chamonix and the Col du Galibier in France. We featured the film in the Gallery spreads in Cross Country 151 and took the opportunity to ask him about his work…

JB, we love your work. Where and when did you learn filmmaking?
I made my first edit with Alexandre Aimard (a well known acro pilot who made the movie Infinity Dream) in 2006, but back then I didn’t like to spend too much time in front of my computer.

In 2009 I started again, on my own, and made some videos with a friend in an attempt to catch a sponsor. I learned to make videos on my own from tutorials on YouTube. Step by step video became my second passion.

Now I don t like shooting so much. I prefer flying and then editing. I spend many weeks trying to make the video perfect. 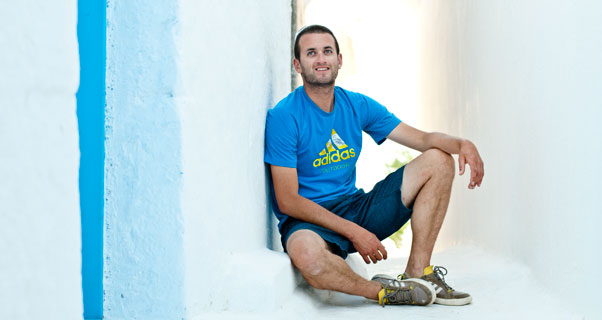 You get a lot of people involved. How? Is it all friends? Are you the key guy? How does it work?
The people around me are the key to everything. So many friends help me to make all my projects possible. The way I work is I get the idea for the movie, then I talk with my video and photo team, Jean-Baptiste Merendet, Adrien Nisan and Louis Garnier. After that I have to organise the money, the plane tickets, the travel. During shooting I try to focus on my sport and give the team maximum creative freedom. We just talk about the action I want and the effect I want to create. Without my friends, nothing will be happen.

Describe the process of making a film.
Every time it’s the same. One moment, I get an idea, the principal idea of the movie. Then I start to speak with my friend about this idea, so the idea has an evolution. Then I try to find some help (sponsor, partner, friend) to make the idea possible. Then I speak with my video and photo team (Jean-Baptiste, Adrien and Louis Garnier), so the idea keeps evolving and it starts to become a really precise idea – the stunt, action, places, the principal emotion we want to share.

After that I make the organisation of everything: plane ticket, hotel, time in the calendar with all the team, money … this is the most boring part! Then it’s time to go shoot, discover some places, learn how it can work with the flying and then checking which action is possible in reality.

During the shooting time I try to focus on my sport, I try to leave the maximum of freedom to the video team, so they can be creative. We just talk about the action I will make in the air and what is important to show. I just focus on the entry and exit shot – the effect of takeoff and landing place.

And once the filming is all done, what then?
After I go back at home, I watch all the sequences to prepare the edit. The music is really important. When I find the music then I start the edit. Then I show to my friends, and they tell me any feedback, and I make some corrections… I can do that many, many, many times! Correction after correction… the video looks better and better, and when all my friends like it, it means that it’s ok, the video is ready.

The music is always so well chosen in your videos. Do you choose it?
I choose it, but my friends confirm my choice.

Urban Side was released in February 2012

Tell me a little about your partnership with Adidas – that’s new, what does it allow you to do?
About Adidas, it s a great partnership, I am really happy to work with them. I really like my relation with them, I feel really free. When I started with them, I was in Adidas HQ in Germany and they told me, “What we want from you, is to enjoy your sport, don’t take risks and make nice photos and video.”

For me it was perfect, they just ask me to make what I like. It’s changed nothing for me, they’ve just given me the opportunity to make bigger projects and pay the video team. That freedom is so important for me. I was really scared there would be pressure on me to make some competition, world record or extreme things … but no, they leave me my creativity, and if they like my ideas they help me to make it possible. I live a real dream, I have to enjoy this time!

LightLine was released in October 2012

There’s an amazing scene in Touch with a bus…
Resalp is a bus company in the Alps and they also helped me with this project. They gave me a bus and a driver and put a lot of trust in me! Thank you to them.

In Santorini the Ambassador hotel also gave us permission to fly at their amazing hotel, and my friend Benoit Regord from Air Libre helped me with his drone for some aerial shooting.

I’d also like to thanks Jean-Baptiste Merendet and Adrien Shams (video team) and Louis Garnier and Antoine Dischly (photography) for their amazing work.

What are you planning for 2014?
We are working on a TV documentary about this project with Adidas, they make the edit, and they will release it on TV for March. I also make some smaller video projects, then at the same time I will prepare the future highlights project with my friend Jim Nougarolle. But I won’t tell you too much things, because I like to keep the surprise!

But also in 2014, I have lot of work in design and testing. I will work on more products from Dudek, and I am really excited about that. I have three new protos and I can’t wait to test them!

I want to be a supercool acro pilot filmmaker from France too, live in the Alps, get all the girls and have all the fun. How can I do that?
I am not sure I can answer this question! To be an acro pilot, the only secret is training. So go to the best acro spot and train, train and train again.

To be a movie maker you have to buy a nice computer and watch lots of tutorials on YouTube!

But about the girls… with that combination (acro + video), all the girls will go away, and to keep a girlfriend will be a big challenge! I have a girlfriend, but I don’t know how she supports me…

And to be supercool … euhhhhhh … I don t know! But something is sure, the only possibility to make what you want is to work a lot, to believe every time that everything is possible.