Top-landing Mont Blanc has been banned followed a mass landing on Wednesday 26 June, when record-breaking cloudbase allowed an estimated 150-200 paraglider pilots to land on the summit of the 4810m mountain.

A high pressure system and heatwave in France combined to create the record cloudbase, which saw pilots climbing to 5,800m above Mont Blanc.

However, despite elation among pilots who made it, the town halls of Chamonix and Saint-Gervais acted almost immediately to prohibit paraglider pilots from landing on Mont Blanc within a radius of 600m of the summit for the rest of June.

They said they acted following the death of a French pilot, who died while taking off from the summit. His body was found on the Italian side of the mountain.

Local police were present on Planpraz take-off between 11am and 2pm on Thursday and Friday following the mass top-landing, warning pilots of the new decree.

Chamonix town hall said the temporary banning order would become a ‘prefectural decree’ for the rest of the summer. They said PGHM Chamonix, the mountain rescue service, had previously warned against ill-equipped and inadequately experienced pilots attempting the flight to the summit of Mont Blanc.

The FFVL, Federation Francaise de Vol Libre, also issued a warning about flying at unusually high altitude. “The heatwave is making extraordinary flights possible,” they posted on their Facebook page. “[But] let us keep safety margins, and be aware of euphoria related to hypoxia at high altitude.”

Later they posted the full set of new rules relating to the ban on top-landing Mont Blanc. 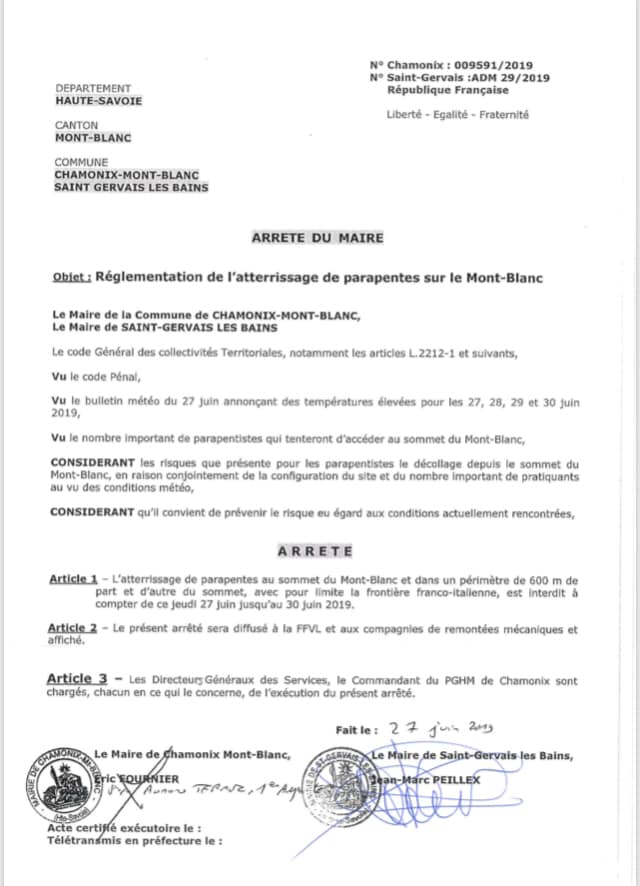 Top landing on Mont Blanc is rarely possible, but has been done several times before.

The first time pilots successfully landed on the summit was on 13 August 2003. Sixteen years later a combination of better paragliding equipment, better pilot knowledge and, crucially, better forecasting means potential good days for the flight to be done are spotted early and widely shared among pilots.

Chamonix has a useful and free pdf guide to flying in the area. There is extensive airspace in the valley that pilots need to be aware of before flying in the region. There is a simple PDF guide to the restrictions.

Taking care in the high mountains

In Cross Country 201 (July 2019) local pilot, guide and PGHM member Fred Souchon describes how to successfully fly the Tour du Mont Blanc, a high altitude route around the mountain. He adds this advice for flying in Chamonix and the big mountains. 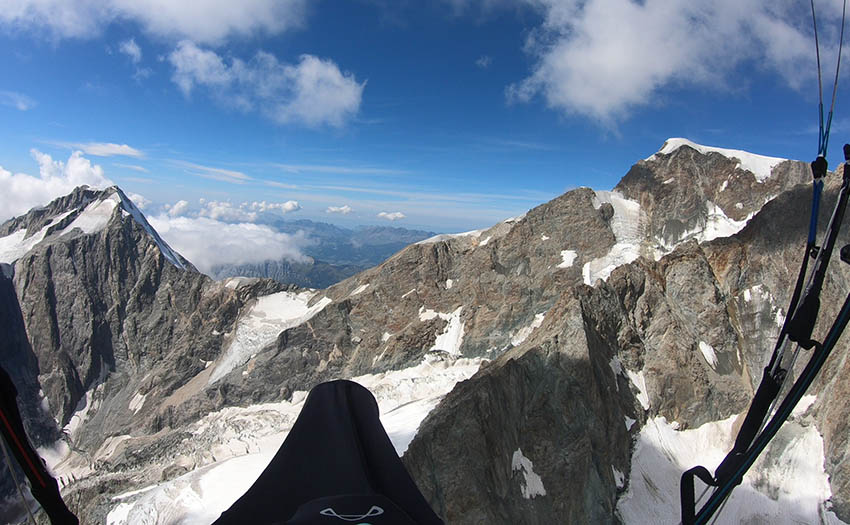 • Do remember that flight here takes place in high mountains, and is suitable only for experienced pilots. Conditions can be very strong and you might have to fly very close to unlandable terrain.

• Don’t forget the flight is at altitudes where hypoxia can be an issue. Lack of oxygen can seriously impair a person’s abilities. The level of oxygen at 4,000m is only 60% of that at sea level.

• Do protect yourself against the cold and the sun. Temperatures can easily drop into negative figures, even in the middle of summer. The UV index increases by about 10% for every 1,000m of elevation, and the snow reflects 40% to 90% of the sun’s rays.

• Do wear boots. You will be flying above glaciers and snowfields. If you are forced to land, trainers will be useless and will make it very difficult for you to either ascend or descend the mountain on foot if you are unable to relaunch where you landed. I advise walking boots at the very least, and ideally pack a pair of lightweight crampons in your kit – there are several models which weigh less than 500g and can be worn with most boots.

• Do fly with buddies. Not only does it make it safer, but you are more likely to succeed! On good days, you might meet 20 or so other pilots at Planpraz take-off. Ask them what radio frequency they are using. They will probably be more than happy to buddy up with you.