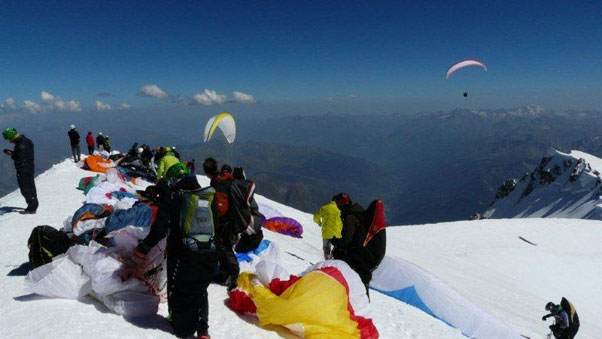 The summit of Mont Blanc, where dozens of pilots toplanded on 19 August 2012. Photo: Sylvain Gattini

A record 50+ paraglider pilots successfully top-landed Mont Blanc, the highest mountain in the Alps, on Sunday 19 August, a day which will surely go down in Chamonix paragliding history as one of the most remarkable ever.

With pilots climbing to 5,000m and blue skies all around, one of the pilots, Sylvain Gattini, summed up the experience of landing on Europe’s highest peak saying, “And here I am, in heaven!”

See photos on Facebook from Gael Lafond who toplanded on the top.

Cross Country magazine’s Marcus King was there, as was former Cross Country editor Bob Drury. Bob, who was flying tandem with a friend, said: “Base at 5,300m! Booming conditions with 7m/s climbs.”

Ozone also reported on the pilots they knew who made the summit, including Martin Bonis who flew the Ozone XXLite, Ozone’s single-surface ‘descent’ glider. “We knew that the XXLite was capable of more than just gliding down, but we are very impressed!” said Ozone.

Ozone also said that photographer Olivier Laugero made the summit, top-landing for the second time after doing it last year too. Alongside him was his friend Eric Gramond with his wife as passenger. Making it a family affair Eric’s son also landed on the summit.

And acro ace Felix Rodriguez also landed on the summit flying his 18.5m Ozone Trickster. After taking off again he infinite tumbled back to the valley floor.

Meanwhile photographer Jerome Maupoint was also flying Mont Blanc on what he called an “incredibly busy day up there”. He had his camera with him – to be featured in the next issue of Cross Country magazine.

Amid the excitement however, the local mountain rescue issued a warning about not flying in restricted airspace around Mont Blanc, saying “Bravo!” but that “many wings” were seen in the exclusion zone on Sunday. Details of the restricted zone, which is in force until 31 August, are here.

This week of August is becoming something of a classic for paragliding in Chamonix. On Sunday 21 August last year around 20 pilots soared above the summit at 5,000m and five, including Gin’s Eric Roussel, top-landed the 4,808m mountain.

Congratulations to all pilots who made the summit today. Send your photos to editor@xccontent.local, we’d love to see them.

More news when we get it.

From the archive: Toplanding Mont Blanc in 2003