The route for the 2019 Red Bull X-Alps has been “officially” revealed by organisers – despite being leaked online last week. 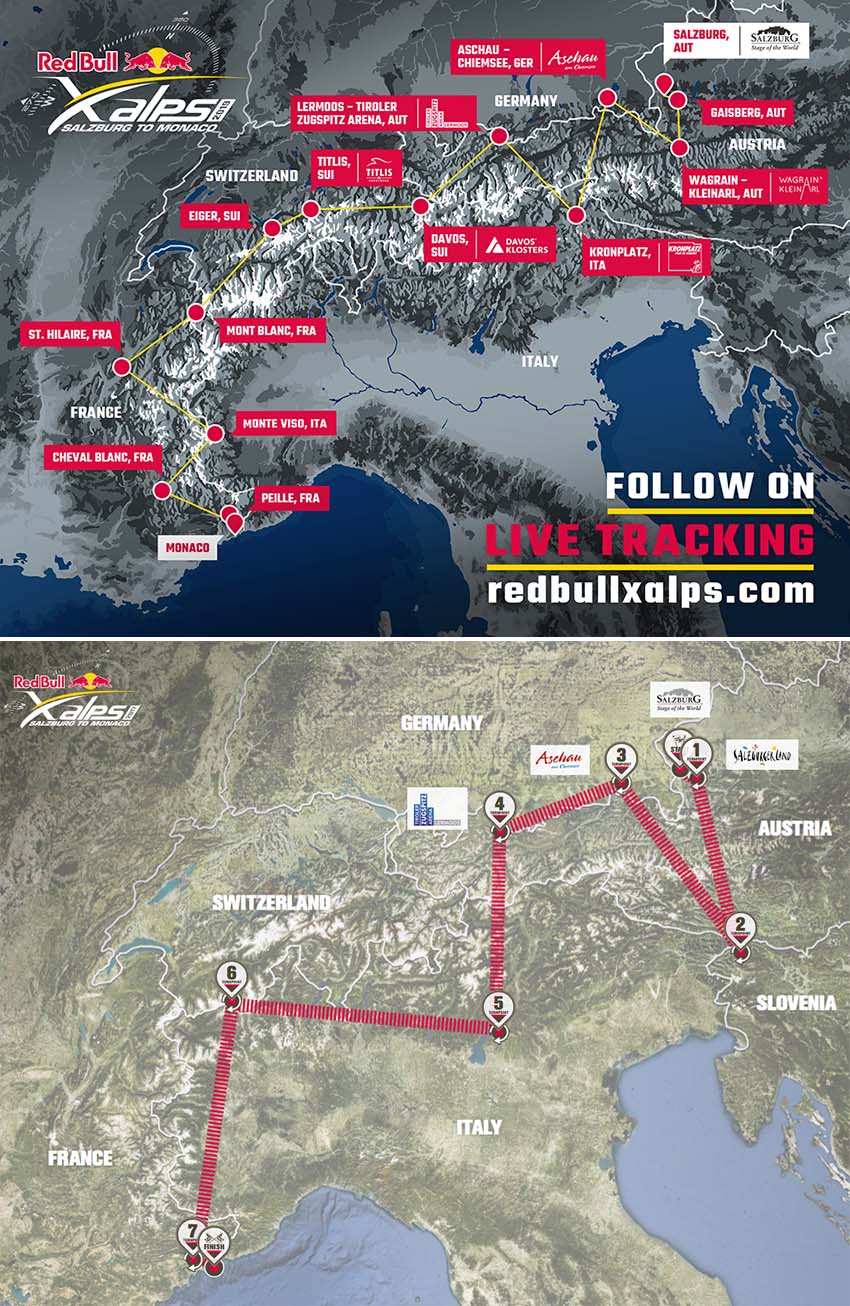 As traditional, the race will start in the centre of Salzburg, Austria before heading up to tag the first Turnpoint at the Gaisberg where pilots will hope to be able to fly.

From there, pilots will need to tag 12 more turnpoints across six countries before reaching goal at Monaco.

Turnpoint 2 is Wagrain-Kleinarl, an Austrian mountain town south of Salzburg. This will also be the scene of the “Prologue”, a day race that takes place three days before the start of the main race. Winners of the Prologue can win benefits that can be applied, or played, throughout the duration of the Red Bull X-Alps.

From there it’s north to Turnpoint 3 at Aschau – Chiemsee, on the northern edge of the Alps.

Pilots must then must head south across the spine of the Alps to Turnpoint 4: the Kronplatz (2,275m) in the Dolomites, Italy. Pilots will need to sign-in on a board next to the famous Messner Mountain Museum there.

The route then heads back north, crossing the Alps again, to the Zugspitze (2,962m), Germany’s highest summit and Turnpoint 5 at Lermoos. This is where in previous races pilots in the air have expressed frustration that they have had to spiral down to the deck to sign-in in a grassy meadow.

From there the route heads west, stitching together some of the best Alpine racing valleys in the whole Alps with a series of turnpoints in Switzerland.

Davos, Titlis and the Eiger are Turnpoints 6, 7 and 8. At Titlis pilots will need to sign-in on a board on a glacier at 3,200m. At the Eiger pilots must enter a 1.5km radius around the summit, either in the air or on foot.

From the Eiger it’s southwest to Mont Blanc, where the same 1.5km radius rule will apply, before heading to the home of the Coupe Icare, free flying’s biggest annual festival, at St Hilaire du Touvet. Pilots must sign in on the ground.

From there, although the straight route south will be beckoning, the route heads back over the main Alpine chain again to Monte Viso (3,841m) in Italy.

It’s then back over the Alps again to tag the Cheval Blanc in the south western French Alps, before turning towards the final turnpoint 91km away at Peille and goal at Monaco.

The new route is significantly different to the 2017 race, which saw pilots given only seven turnpoints. In 2017 that meant pilots had a lot of leeway in route choice, but it also meant a lot of hiking through the hot flatlands of Italy towards the end of the race.

With the addition of turnpoints in the French Alps this will keep pilots in the mountains, where conditions will hopefully allow pilots to fly, not hike.

The Red Bull X-Alps 2019 starts on 16 June this year, a month earlier than previous editions. This could mean pilots have to deal with more snow or wet ground in the northern Alps.

Thirty-two pilots from 20 countries will compete, including two women.

In a headache for the organisers the official route was published online almost a week ahead of schedule, somewhat stealing the official Red Bull X-Alps thunder.

A press release sent out under embargo (a press term used to hold back time-sensitive information) was broken and the route was published online and shared widely on social media five days before the official announcement.