Chrigel Maurer flies like a bird and leads out by 175km – but gets 24hr time penalty for airspace
• Also read: Barometric versus GPS altitude

What to say about Day 6 of the Red Bull X-Alps 2011? An incredible day of flying by race leader Chrigel Maurer, who extended his lead by 175km by the time he landed. After spending the night on a high pass above 3,000m below Monte Cevedale in Italy first light saw him fly what must have been a beautiful sleddy to the valley below.

He than hiked up the eastern slopes of the Monte Sobretta group and, probably before the dew was even dry was ready to fly. He took off just after 9am local time and slowly scratched his way up. By 10am he was at 3,000m and on track to make an enormous flight, covering 213km

He landed after flying the whole day near Zermatt, close to the iconic mountain and turnpoint six.

Along the way he toplanded at 145km, presumably for a ‘comfort break’, and left his fellow athletes absolutely in the dust. His nearest rival, Toma Coconea, was still on launch at 11am while Chrigel was averaging 40km/h through the air.

But then, in the middle of triumph, a moment of agony. His icon on the Red Bull X-Alps live tracking started to flash. He was under investigation for airspace infringement. Surely not? We waited with baited breath. A personal email came into the XCmag office: the X-Alps crew were all equally ‘OMG!’ “I TOTALLY hope not!” read the answer to our inquiry as to whether or not he’d bust airspace.

On the ground, Chrigel must have been ecstatic. After the 2009 who would have thought the flying could get better, faster, more fluid? And yet we’d just all watched it happen. Chrigel flying textbook-like through the mountains, racing along ridges, hitting a booming climb at the end, climbing to 3,000m and then off on a valley crossing. If there is a tracklog any instructor wants to use to show his Alpine students how it’s done, then it’s this one. 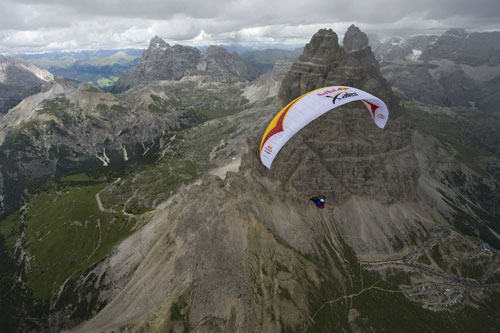 In the end our worst fears weren’t realised. A clearly tired X-Alps crew posted after midnight that he had infringed Locarno airspace and had earned himself a 24-hour time penalty.

Locarno rang a bell. Isn’t that… yes it is, it was where Toma Coconea bust airspace in 2009.

Questions remain though about what sort of airspace infringement it was. Chrigel is reported to be flying using barometric altitude, while tracking is done using GPS altitude. The ‘barometric v GPS altitude’ issue is as old as the hills, and the difference is still not widely understood. Paragliding and hang gliding continue to use GPS altitude for competitions and events while the rest of aviation (and apparently Chrigel) uses barometric altitude.

In brief, GPS and barometric altitude are not the same thing – they can be different by a minimum of 45m and potentially much more. Both the Paragliding World Cup Association and FAI/CIVL events have come a cropper by scoring on GPS altitude when pilots have been flying – and correctly avoiding airspace – using barometric altitude. Pilots have been disqualified and competitions won and lost on the difference. It is a crucial, although admittedly quite complicated, issue.

Cross Country magazine published an article on the barometric-versus-GPS-altitude issue back in 2009. We’ve published it online here today too.

Anyway, organisers will hopefully come through with more details in their own time. To have the star of the show penalised by a 24-hour time penalty is no small thing.

Today, Saturday, it’s raining and the crowd at the back – ‘The Rest’ – will be painfully slogging along tarmac and through rain. Meanwhile, Chrigel will be enjoying his own form of rest. What would you do with 24 hours in Zermatt? A bit of sight seeing? A coffee or two? A massage and a swim? Or just lie back and smile?

As Chrigel’s supporter told the X-Alps crew: “A 24 hour rest after such an exhausting last week could actually do us a lot of good.”

The race is on – but today we wait.