Paragliding in Pakistan: Kings of the wild frontier

8th September 2006 – Tarashing – Parishing
There’s a clear sky this morning for the first time in a week. At last we can contemplate the 8120m giant Nanga Parbat and its immense 4500 metre high Rupal face.

Nanga Parbat is a man eating mountain; countless men have died trying to scale its impressive faces. Nicknamed Naked Mountain because of the way it stands alone, rising high above all other mountains around it, Nanga Parbat is the final bastion of the Himalayas before the great plain.

Our bags are packed full of supplies for ten days: ice axes, crampons, food and our paragliders. We’re ready for a new adventure. The Nanga Parbat tour and then on into Baltistan: a 500 km trip that includes some of the highest summits and biggest glaciers in the world – an anthology of some of the World’s most dramatic scenery. 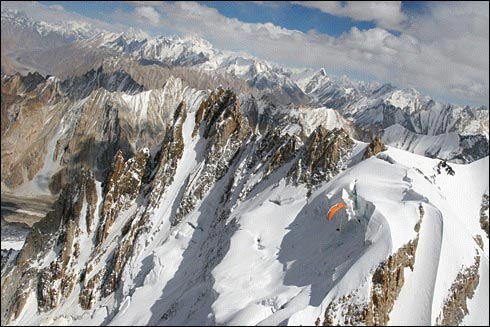 Thanking our hosts we head off out to look for a good take-off. The first difficulty is convincing the local village policeman to let us leave without a guide and special permit – Pakistan bureaucracy reaches even the most rural locations.

In the end he agrees, but not before we have to sign a paper saying we left in spite of his recommendations and were wholly responsible for ourselves. He says he will pray for us continually.

Heading off we start to swallow our pills: aspirin, diamox, anything to reduce the effect of hypoxia. We’re at 3500 metres but we’ll soon be at 6500 metres.

The Nanga Parbat tour has only ever been done once before, by John Silvester last October. It’s similar to the tour of Mt Blanc but bigger, higher and wilder. One hundred kilometres of high altitude flying, unequalled in ambience and commitment.

We’ll visit the three greatest glacier faces in the world: the Rupal, Daimir, and Rakhiot, each separated by passes of up to 5500 metres. There are no roads and no villages within days of walking should we bomb out.

We’re quickly past the twenty kilometres wide Rupal face, climbing under an ever rising cloud base. The clouds are thick and cold and the hail painfully strikes our faces. Suddenly, at over 6000 metres on a rocky outcrop, we spot two abandoned tents. There’s no one inside them but the sight makes us realise the surrealistic situation we are in, and our vulnerability. The paragliders that are holding us up suddenly appear very fragile.

Crossing the Mazeno Pass we topple onto the gigantic Diamir face. The icy cliffs produce no thermals themselves but thanks to the rocky spurs that break out from them we move on with little difficulty. High on one of these ridges we spot fresh footprints at over 6000 m – a brave climber or a yeti? Who knows? Legends are rife in this neck of the woods.

We’re following the sun round and have exchanged the big fat cumulus on the east face for less offensive whiskers on the western side. Cloud base is no higher than 6500 m and we are still a long way beneath the summit where the strong west wind sprays plumes of snow skyward.

Nanga Parbat is the first line of defence against the storms coming in from the Indus plains. The battering it takes is one reason why it’s earned its fearful reputation as a man-eater of a mountain. And we’d had a mad dream of flying over the summit itself using dynamic lift created by the wind! Perhaps it’s feasible, but today’s not the day.

Finally we arrive back in the valley that leads back to Tarashing and turn north to land in a little village in the Parashing valley, at the gateway to the high Deosai plateau. It takes two weeks to walk just half of what we’ve just flown in four amazing hours.

The local inhabitants are overjoyed and both young and old dance around us mimicking our piloting movements. It takes an age to disperse the excited and inquisitive villagers. Finally, exhausted, we sleep. Tomorrow will be another hard day if we are going to find a way across the Deosai massif and link the Himalaya to the Karakoram.

Read more: Follow the rest of their trip in Issue 108 of Cross Country