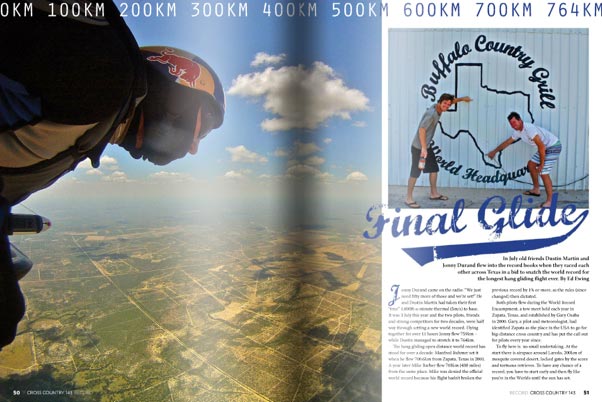 When news came through that Jonny Durand and Dustin Martin were flying across Texas and looked set to break the hang gliding world record, we dropped everything to stand and stare at their Spot tracks as it happened. A decade-old world record was falling before our eyes, and in massive style.

Dustin and Jonny have been friends for twenty years, since they rolled back from a task together aged 18 and 19, one having beaten the other in some long forgotten competition. They formed a friendship that has now resulted in a phenomenal sporting achievement. Eleven hours in the harness, racing at full speed until sunset, eking out the very last of the day, flying wingtip to wingtip. 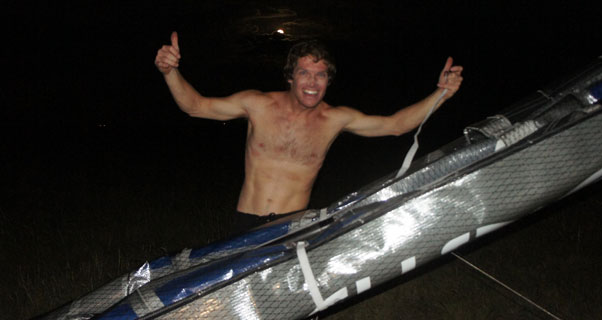 We knew we had to go big in Cross Country Magazine. We waited for the dust to settle a little, and then rang Dustin at his workshop in Montana. He’s a pretty laidback guy, but the story that he told as we listened on speakerphone for over an hour was more inspirational than we’d imagined.

It had every element of what makes these sports so great in spades. The long friendship and sporting rivalry of the pair, the epic conditions in a drought-hit Texas, the awesomeness of the distance, the fact that Manfred Ruhmer – the world’s best hang glider pilot – had held on to the official record for so long.

Later, speaking to Jonny by phone in Los Angeles, where he was waiting to travel to Brazil, we got his side of the story. Was he gutted at flying so far but not getting the record? Did he feel jilted by Dustin who took the final glide that few kilometres extra to take the world record? Or was he cool with it all?

Cross Country Magazine 143 is packed with amazing stories this issue – from flying 200 mountain miles by paraglider in the US to top-landing Mont Blanc – but this is a truly classic tale, of a world-class flight. Whatever you fly – from a lightweight paraglider to a topless hang glider – this story will resonate. It’s about the fundamentals of our sport: of being in the right place at the right time, of flying your best, of friendship and rivalry.

Out now in Cross Country Magazine 143.

You can download your copy now for your iPad or tablet through the Zinio app, or read it on your computer.

Or you can buy a paper copy here and have it mailed to your door.