How to thermal better. Period. 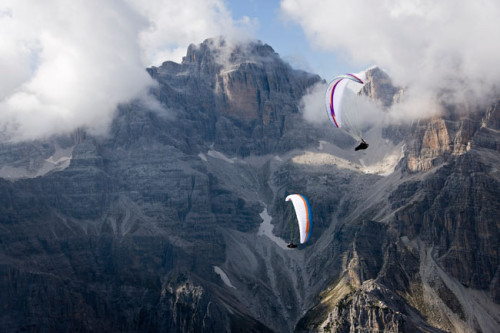 Pilots working together to find the core in the Dolomites in Italy. Photo: Martin Scheel

Centring thermals efficiently, and climbing quickly, are probably the most fundamental skills you need to soar successfully. Even a small improvement in your technique could easily mean an extra few hundred feet in every thermal or thousands of feet in a typical XC flight of, say, 10 thermals.

Come the end of the day, this might even make the difference between getting home and landing out. In a competition, what you gain in improved climb rate could well equate to the points separating the winner and mid-table obscurity.

THINK IT
Before you even reach a thermal, you can start building a mental picture that will help you centre and climb quickly when you get there. Typically, you will be approaching a cumulus hoping to climb. You can improve your chances of finding a thermal by assimilating all the experience gained on that day to guess where the thermal might be in relation to the cloud. Whilst on some days, thermals appear to form randomly, there are others when you can find them quite reliably. For example, if a strong wind and bright sunshine were feeding a cloud from one direction, you would expect to find the thermal on that same side. Ill cover this in more detail in the next issue.

FEEL IT
As you approach the area where you expect the thermal to be, hold the base bar or your brakes very lightly. Other than maintaining a good lookout, you should be totally focused on feeling which side the thermal is. If the thermal feels strong enough, turn towards the wing that’s lifted.
After you have rolled and turned into the thermal, one of two things might happen: If the lift steadily improves, great. But what should you do if the lift drops into sink?

The answer depends on how good the surge felt and how desperate you are to climb. If you weren’t confident of the lift when you started to turn and the clouds ahead look good, then simply roll out and get going, if you’ve got the height. However, if the surge felt smooth and solid, but you turn into sink, then you’ve probably turned the wrong way.

At this point FORGET any distractions about what techniques to use, and resort to a mental picture. Logically, the quickest way back into the centre is to do a tight 270° turn, and then re-centre. This manoeuvre brings you back to where you would have been if you’d turned the right way in the first place! You’re now in a position to maximise your climb.

Despite the enormous importance of climbing quickly in thermals, this is one of most controversial topics in free flying. Most people want to be taught a prescriptive technique for thermalling, and this is where the confusion begins. There are two widely-taught techniques, but they appear to be completely contradictory. The tighten on the surge theory says that when the vario indicates the greatest climb rate, you should increase the angle of bank. In apparent contrast, the second theory says you should widen out when encountering the strongest lift. So how do we resolve this contradiction? The answer is that both theories are right, but they are appropriate in different situations.

TIGHTEN ON THE SURGE
So, having positioned your glider in the thermal, how do you establish yourself in the centre and optimise your climb rate? The answer is to use the tighten on the surge technique: when you feel the thermal pushing solidly, or the vario indicates the strongest lift, you should tighten the turn and dig the wing into the thermal. Most pilots don’t turn tightly enough, but of course, if you only tighten up in lift you’ll end up in a spiral dive! To prevent this, when the vario indicates weaker lift or sink, you should widen the turn out to anticipate banking and pulling into the next surge.

The importance of tightening on good surges was brought home to me during the 1997 World Air Games in Turkey, where I was competing in the gliding section. Climbing in hot, blue thermals with massive gaggles in identical-performance gliders, often the only way to achieve an advantage on anyone else was simply to get stuck right in to the core of the thermal. The pair-flying French pilots who went on to win always managed to centre on the strongest cores.

WIDEN OUT IN THE STRONGEST LIFT
Tightening on the surge is the technique for staying centred in one core of a thermal. So what is the role of the opposing technique of widening out in the lift? Quite simply, this should be used when you think there is a developing core nearby. But how can you recognise this emerging fresh bubble?

Having centred on one core, there are a few tell-tale signs: firstly, the average rate of climb drops off and, secondly, the thermal seems much stronger on one side than the other. Another core has formed, is bumping up the side of the one you are in, and the outflow from that bubble is interfering with yours. Sometimes this is marked by birds or other gliders circling, or tendrils being sucked into cloudbase nearby. In any case, the solution is simple: widen right out in the strongest lift, wait a few moments, and then tighten up in the emerging bubble. Then continue to stay centred in the new pulse of lift using the tighten on the surge technique.

The ability to re-centre quickly can sometimes be the key to competition success. On a critical day in the Junior Gliding World Championships in Holland, I was able to gain enough height on the gaggle in just one thermal to make it home as the sole finisher. What made the difference that day was simply that I re-centred efficiently and caught a short-lived bubble which the rest of the gaggle missed. That turned out to be the last thermal of the day, giving me enough height to glide home over the unlandable forest, whilst everyone else hit the deck the wrong side of it.

There is a strong correlation between the width of a cumulus and the number of bubbles feeding that cloud. For example, when arriving under a vast cloud street you should expect loads of bubbles and will probably need to widen out into wind frequently when you feel a fresh surge. On the other hand, climbing under the last isolated cloud of the day, you are likely to have to rely on simply tightening on the surge to get you home.

Whichever style you adopt, if you want to climb fast, you have to keep working it all the way to the top! You’ll also need to be planning where you’ll go when you leave the lift, but that’s for another article.