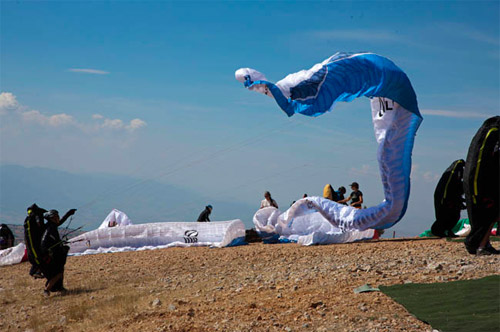 Racy... A comp glider on take off at the Paragliding World Cup Superfinal this week. Photo: Martin Scheel

The PMA discussed the issue at the recent Coupe Icare, and voted overwhelmingly to back banning Open Class gliders in World and Continental championships. Sixteen of the 21 members voted for restricting FAI Cat 1 competitions to EN-D gliders, with two against and three abstentions.

“The PMA believe that from the material point of view a significant way to improve safety in FAI cat.1 competitions is to restrict them to EN–D gliders. Open Class gliders have their place in competitions but FAI cat.1 is not that place.”

The result of such a ban, which has been talked about for years and came to the fore again following the death in 2009 of Stefan Schmoker at the World Championships in Valle de Bravo, would likely be welcomed by many time-served competition pilots.

The FAI and CIVL hierarchies would also probably welcome such a move. Paragliding competition has long been regarded as having a “problem” with safety at high levels in the FAI.

Others however will doubtless say the move is self-serving on the part of the PMA (a commercial, manufacturers’ association) which ran into trouble last year when it attempted to ban stiffening technology in paraglider design.

Either way, the move has again re-opened the debate on whether to ban Open Class gliders in FAI competition. How that plays out remains to be seen, although one route open to the PMA would be to propose such an Open Class ban at the CIVL meeting early next year, where it would be voted on.

A full round up of views, comment and opinion on this issue will feature in the next issue of Cross Country magazine, due out in early November 2010.