Despite a less than favourable forecast, the Kössen Super Paragliding Testival saw some great flying, with hundreds of pilots enjoying the chance to fly and try lots of different wings.

The event, held at the famous Fliegerbar at the Austrian flying site of Kössen over the weekend of 30 May to 2 June, was attended by even more manufacturers than previous years, with the trade tents now extending down three sides of the landing field. Instrument-makers even had their own “street”, with XC Tracer, SkyBean, Stodeus and SkyTraxx all present. The team from Flymaster had made the long journey from Portugal to be there too.

The Super Paragliding Testival is a pilot-focused flying event aimed at allowing pilots to test fly new wings. Pilots simply have to hand the manufacturers their passport as deposit, show their paragliding licence and then take a wing away to try. Access to launch is minutes away by cablecar. 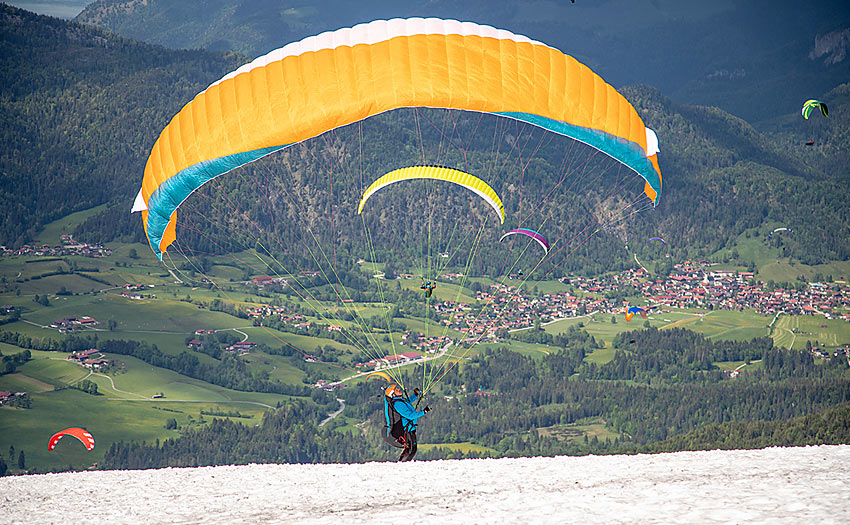 On launch there was a lot of late-season snow, making launches that extra tricky for some, but the skies were full every flyable moment. In the mornings fitter pilots enjoyed an easy hike-and-fly, while as the sun was setting the last pilots were returning from cross-country flights.

A huge thanks must go to Sepp Himberger and his team at the Fliegerbar for organising the event, and of course all the manufacturers for supporting what is a great “back to our flying roots” event.

We took the opportunity chat to some of the manufacturers on Facebook Live, here is a round up of the interviews: