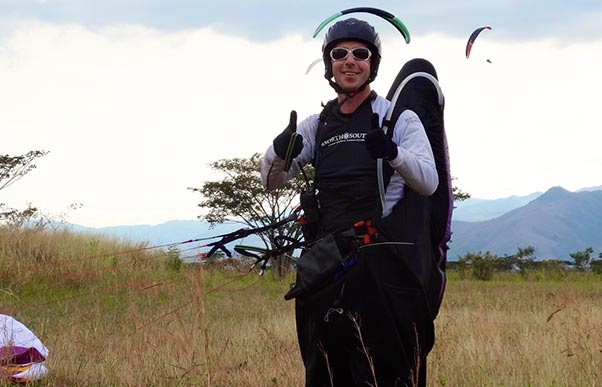 From ‘Epic fail in Colombia’ to ‘Epic 200k in the USA’ the paragliding comp scene has seen some big moments in 2014 so far.

Not all of them have been pretty, but for many pilots taking part the politics and wrangling over wings has simply been an unwanted distraction from what’s really important: flying fast in amazing places with your friends.

In January we published an article online called ‘Paragliding is not a racing sport‘. It got a lot of views and hit a lot of nails on heads for lots of pilots. But not everyone agreed – including British team pilot Guy Anderson, who wrote and sent us a response.

As the European Paragliding Championships opens in Serbia it seemed a good time to publish Guy’s thoughts – it’s not all riser-tweaking, headbanging and reserve rides, it’s about enjoying it, the competitive spirit, and becoming a better pilot.

Guy has flown in the Paragliding World Cup and FAI Cat 1 competitions around the world. A family man and a crack XC pilot – and definitely not a headbanger – he explains exactly why there is much fun to be had in competing – and why it’s about what goes on in the air, not the scoring room, that really matters…

THERE are lots of reasons I fly competitions but top of the list are the people. It’s rare that you can meet a group of people who come from so many different backgrounds/occupations that share the same DNA-laced addiction.

Often slightly deranged, most comp pilots are upbeat, optimistic people with a winner’s knack of quickly putting a bad day behind them. At the Paragliding World Cup level it’s a very tight community where folk really do pull together through good times and bad. Respect is hard-earned and all the more genuine.

I am now firmly in the old-duffers category but to me comp flying is still very new and exciting. While I may be older than most of the folk at your average comp I still feel like a new boy. There are always new pilots turning up for comps and that’s what keep the whole jamboree fresh.

The podiums change virtually every comp and it’s not just a procession behind the guy/girl with the best glider. Francisco would have won the Superfinal in Brazil in January flying any glider that week.

Comps take us to places off the tourist map and we are almost always welcomed by the local people with real affection. I love going somewhere other than as a tourist and always find that hanging out with local pilots means you slip under the veneer and find the true character of a place, albeit for just a couple of weeks.

I love vol-biv trips too and have done my fair share in the Alps and South America, but you don’t tend to get to know the locals in quite the same way. You’re generally just passing through and the glimpses you get of local life are just that – fleeting and all too brief.

After a week in one spot you begin to get a real feeling for the airflows and likely places for a consistent thermal.

The local pilots can be a real education too. Following Julian and Steban around in Colombia, I couldn’t believe it was possible to be so low, flying so fast for so long. The way they read the sky, using the timing of when to set off towards a blue hole to hit the thermal just as it formed was inspirational.

Beyond the flying, comps are just fun: Watching Craig Morgan blast water-melons at point-blank with a Colt 45 in Idaho. Drinking boxes of rum in the square with the Venezuelans in Roldanillo. Watching Mickey Siegel putting on his special pink helmet given to him by the Swiss team in Governador Valadares for flying like a wus.

Trying to talk coherently to a little old lady on whose ranch I had crashed while at the same time hallucinating she was a huge turkey (because of all the class A drugs the nice doctors had given me). For me these are all strange and at times side-splitting moments you just don’t get in ‘normal’ life.

The daily routine of a comp instils an order that really helps me to fly better. I like the daily routine of finding my spot on the hill, getting my glider unpacked and ready, lines and harness untwisted, ballast stowed and secure, clothes ready.

I like the order and ritual of plugging in the day’s task, getting the full weather briefing and then waiting for the window to open. I always try to get off early to have plenty of time in the air to fully relax before the start.

This may sound dull to the strap-it-on and jump off the hill XC brigade but I find it really helps me to get into the right frame of mind for flying quickly and accurately.

Tactical racing is a completely different skill to XC flying. Not better or worse, just different. You use all your XC knowledge but craft it to flying around a course with as much intelligence as you can muster.

Using the window to get in the perfect start position you have to constantly assess wind direction and cloud streets – normal skills for an XC pilot but then you have to put them in the context of the route you have to fly.

At first I found large gaggles a bit daunting, but by and large now I find most pilots really well behaved and respectful of each other.

Observers might complain that tasks are too short but when the field cranks along at 40km/h most pilots are exhausted after a couple of hours anyway. When you add on the hour jostling for the perfect start it all adds up, and after a week of flying most of us are pretty well cooked.

Just because it’s a competition don’t think for a minute that other pilots will hold back on offering useful ideas. In my experience the bigger the name the more open and generous they are with good advice. Yassen Savov is always good for top tips both before and after the task, whether he wins or not.

On a tricky day in Brazil where we had a long into-wind task in very light lift Russell Ogden just seemed to make it all look very easy. We had climbs that were so weak you just drifted back to where you had left the last one and so punching into wind really became a slog.

I asked Russ if he used his instruments to calculate the correct speed-to-fly on glide and whether we were better to climb or glide and his answer was, “What do you think?”

Of course I knew the answer, like everything else with Russ it must be by eye.

Wrong. He said that for the last few years when going into wind he just aims to glide at about the trim speed of the glider, using the bar to get to the right km/h number on his GPS.

So simple even I could do it.

When flying cross country I’m always looking for clues about just what’s happening in the air ahead of me. At home in the UK we don’t have the bird population of Colombia or Brazil so most thermals are not marked by happy vultures.

If you’re lucky you might see the odd seagull (never trust a seagull) or buzzard so most of the time when flying XC you’re just on your own for markers of what’s going up.

Compare that to a comp where if you’ve cocked-up the start you may have 100 people ahead of you showing you exactly, in technicolour 20:20 detail the precise detail of what’s going on.

As you glide, if you keep your eyes open to what’s happening you can literally SEE the lifty lines. Some pilots (Charles Cazaux and Stephan Wyss in particular) seem to be able to just glide from the bottom to the top of the stack very consistently just by changing their line between thermals.

In a big comp it’s possible to come from the back straight to the front just by “seeing” the air in front of you. When it works there are few better feelings in flying.

Paragliding comps are not spectator sports, my wife could tell you that, but for the competitor who can use his eyesight they are thrilling start to finish.

Coming back from the crash I had in Idaho 18 months ago has been the most rewarding experience of my 51 years on the planet.

It’s taught me to be happy with my lot in life, to appreciate my family and friends, my work colleagues and fellow pilots. I have always been the luckiest person on the planet, I just didn’t realise before.

Had I not decided one day to just fill in the form for the British Open five years ago and “just give it a go” a whole chapter of my life would have remained closed to me and my existence would have been all the poorer. Well maybe not, but you’ll never know if you don’t try.

Opening your eyes to what’s possible

So you might think that the weeks I spend overseas in great flying conditions would make me blasé about flying back at home on mud-island UK but the opposite seems to have happened.

I’ve seen things in competition that shouldn’t be possible on a paraglider and I am just dying to see if I can do something similar back home. I honestly couldn’t wait for the XC season to get started: we have one of the most vibrant XC scenes in the world here with a massively popular XC league that keeps everyone on their toes.

We have huge triangles to plan in Wales and Scotland (now using Russ’s upwind flying made simple technique) and it’s only a matter of time before someone manages to fly 300km – why not me?

Watching the top pilots close up in competition you get a glimpse of how relaxed they appear to be, even in the most demanding conditions. If one day I can achieve just a few seconds of that zen-like state when flying over the emerald green fields of southern England I’ll be a very happy man.

Are comps perfect? No, but what is? If you ask me they are just one facet of flying that need to be experienced on your journey to flying nirvana.

Follow Guy and the British Team throughout the European Paragliding Championships at www.britishteampara.blogspot.co.uk