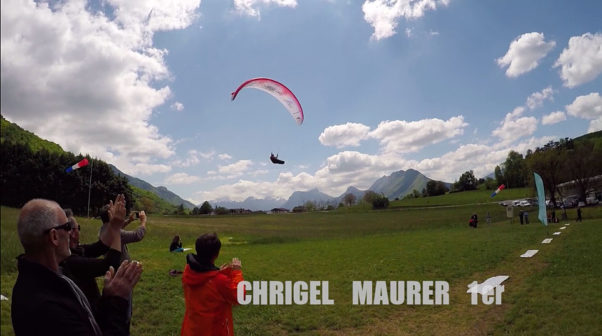 Chrigel Maurer won the 2016 edition of the Bornes to Fly hike-and-fly race, finishing the 105km course in under 24 hours.

Maxime Pinot was second in goal, just 40 minutes later, and Benoit Outters took the final podium spot, the third of eight pilots to reach goal on the second day.

Forty-five teams were registered for the 2016 event, which started and ended at Talloires on the east shore of lake Annecy. The four turnpoints were set at Ugine, Plaine Joux, Croise Baulet and Sur Cou, the route being designed to take pilots into areas protected from the northerly winds.

The race started at 14:30 on Saturday 14 May. Pilots ran up to the Montmin launch above Talloires, and all managed to launch between the clouds and head off towards the first turnpoint, one pilot reaching it in the air, and several making it to Megeve by the evening’s cut-off.

By 9:30am on day two, the leaders had walked to Plaine Joux from Megeve, and launched into better looking skies, reporting cloudbases of up to 2,200m.

At the time of writing the race continues, with several teams still out on the course. The finish time is 4pm on Monday 16 May 2016.