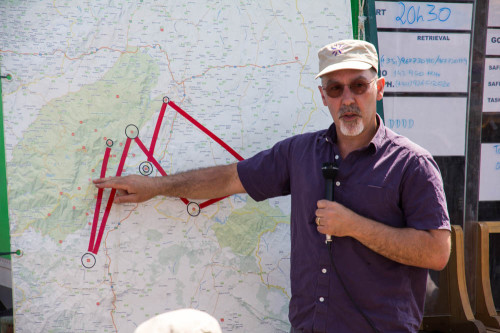 After a rest day thanks to strong winds, pilots reassembled on the launch of Azinha for the fourth task of the event. Out front a fire was burning and this was causing headaches for the task setters. After some discussion they decided on a 72.9km race to goal with the goal field on the northeast side of the mountains. To stop pilots going round the eastern edge of the mountains where the fire helicopters would be operating they set a turnpoint in the middle of the mountains.

As was becoming the norm the pilots climbed over launch before heading to the ridge opposite to wait for the race start. To the north we could see the convergence starting to set up but it was still some way from us. With the first turnpoint tagged the gaggle headed back over launch and into the boonies beyond. Many enjoyed good climbs but a few got low in this area and had to hunt out feisty climbs low down; others slipped out into the flats rather than risk a long walkout.

For those that made it up, good clouds beckoned them on. At the task briefing Adrian Thomas had predicted that the move into the flatlands would be the crux of the task. For some this turned out to be the case but over 70 pilots made it through to arrive at goal. Nuno Virgilo won the task to extend his lead in the competition. He then proved how easy he found it, by flying back again. 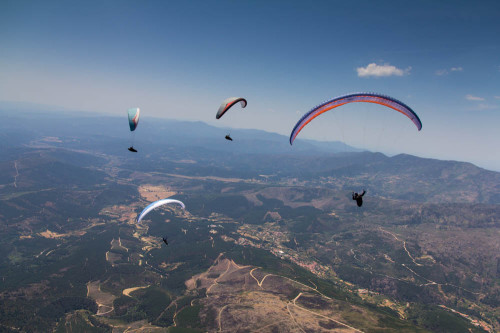 Pilots thermalling on the way to turnpoint 1 of task 5. Photo: Marcus King

On Saturday 6 July, with only one more day to go, the organisers decided to pull a big task out of the bag – something we had all been hoping for. A 160km task (139.7km optimised) was called using six turnpoints, the majority of which were out in the flatlands to the south of the main range. After the normal start, pilots headed to the first turnpoint to the southwest of the town of Covilha. The meet director and task committee had expected convergence in this area but it failed to materialise. Instead we found stable conditions. This meant that getting the turnpoint was a bit of a battle for many, indeed getting over the high plateau to the front ridge was hard with many getting up close and personal to the boulders scattered across the mountain, which proved to be the size of houses when close. Others got blown back into the wooded valleys behind the low bald ridges that lead to the first turnpoint. 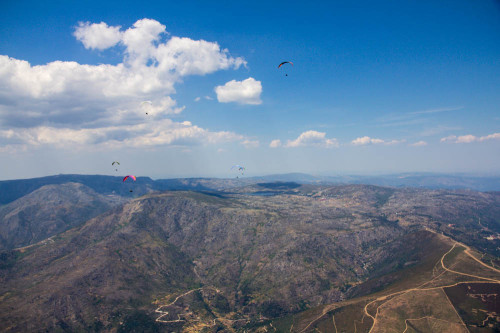 Returning over the high plateau of the mountain region. Photo: Marcus King

Those that made it this far had to then try and climb again to move back along the ridges, as landings behind Covilha were rather sparse. Luckily the hotels in spectacular settings on the ridgeline seemed to mark the thermal triggers. As we moved further northeast along the range the thermals got stronger and started to pop off the edge of the hills, making life easier.

At turnpoint 2 the convergence area was obvious out in the flats but it took a long glide to reach the clouds. This meant some had to scrabble from low down amongst the many windmills in the area. Once established under the clouds at 3,500m there was an obvious street to the next turnpoint, so the field was able to make quick progress using bar and ears to stay out of the clouds.

The next leg though passed a large lake and there was a big blue hole to greet everyone on the way to the last-but-one turnpoint. This was a difficult section for many, including the competition leader Nuno Virgilo, as he tried to push on low. In the end 17 pilots made goal with many of them saying they needed very low saves to make it in. The Brits were showing how it was done, with Adrian Thomas winning the day ahead of John Ellison and Emile Van Wyk. The only sports class glider to make goal was comps newcomer Remi Pickett flying an Ozone Delta 2. It was a late night for many, getting back to HQ well after dark. 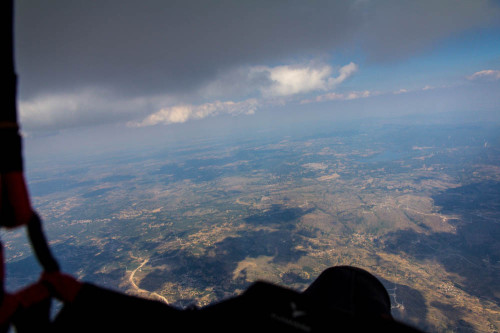 Up high under the convergence, having escaped the windmills. Photo: Marcus King

And so we arrived at the final day of the comp. With the need for getting results out early and not wanting pilots stranded in the boonies the meet director called a 77km race to goal, and with large cylinders on some turnpoints this meant the optimised course was 58.7km long. Conditions in the air were much better than the previous day with good strong climbs taking pilots quickly to 3,000m. The one key point of the task was the push to the last turnpoint where the wise glided out through heavy sink to the low hills and found a good convergence line; those who tried to take a more direct route were decked by the sink behind the mountains. Venezualan pilot Juan Becerra romped home in an hour and 39 minutes on his Boomerang 9 followed by Yoshiaki Hirokawa from Japan and Emile Van Wyk. Steve Nash, flying a Nova Factor 2, took the sports class win. 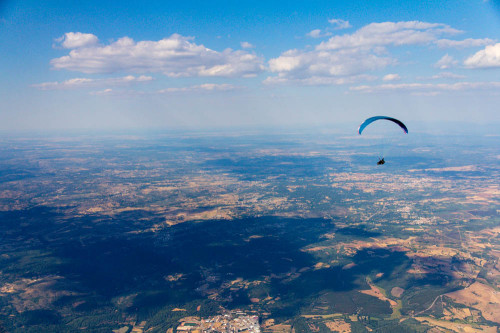 The prizegiving ceremony was held at a restaurant and pool complex at the village of Sameiro. Overall winner of the competition Adrian Thomas was thrown in the pool before he could claim his prize, with just about everyone following him in during the evening. But what else do you expect! 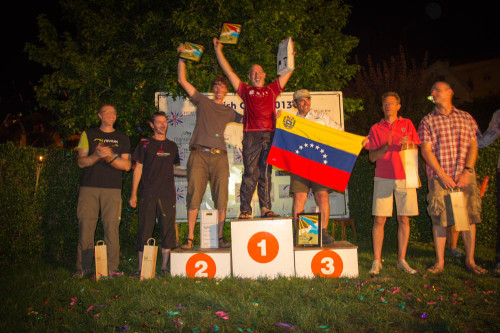 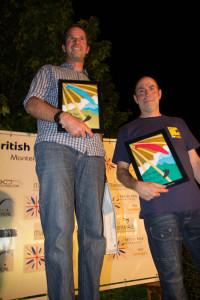 Sports Class (EN C and below) 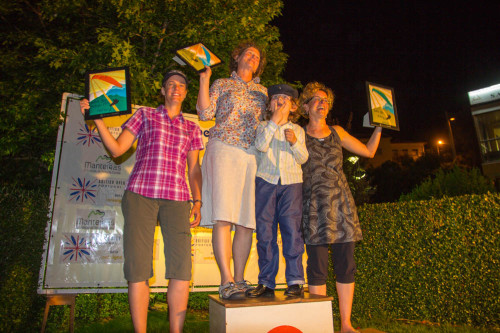 Full results can be found at clubevertical.org