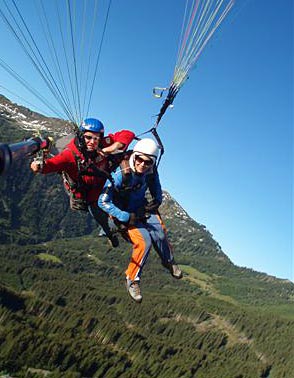 Lois Grugger on his way to a tandem paragliding record

Professional tandem pilots don’t usually do much cross country – when the weather’s perfect they’re doing tandem rides, of course. That’s what Lois Grugger from Gastein has been doing for the past few years – until, that is, he unpacked his new Advance tandem glider.

After years of cross country abstinence the Salzburg Flying School pilot set out with Petra Lindbichler, a close friend, on a renewed hunt for kilometres – and straightaway set a new World Record with the Bibeta 4!

Takeoff was at the Schareck at 10.45am, on 9 May 2008, on the Mölltaler glacier. They went past the Evian source at Böckstein, via the Deutingalm at Dienten (turnpoint 1) and the Vorhofalm at Uttendorf (turnpoint 2), and then back to Evian.

The result of this five-and-a-half-hour flight was a 112 km triangle – a new world tandem record! Lois said: “The glider’s perfect – perfect to take off, nice to thermal, a perfect tandem glider.” Lois had only made one flight with it before the record flight!

Lois said it wasn’t just the equipment that pulled off the world record: “Tandem flying always needs two people, and Petra was a great flying companion.

“As the passenger she had to sit in her seat for hours, and this isn’t as comfortable as a solo flight.

“Among the less fun things which have to be endured on a long flight are the cold at altitude, and naturally the turbulence in the thermals.

“I am happy that she had the courage and trust to try this record flight with me, ” Lois said.

Documentation for a world record is relatively elaborate. Unlike OLC-scoring it’s not enough just to turn in your GPS for an international record flight to be recognised. As well as the electronic evidence you need photos, as well as the signatures of takeoff and landing witnesses. This is the second time that Lois has applied for this tandem world record. He did it six year ago – but there was something wrong with his GPS upload!

This time though Lois said the extensive paperwork had already been handed in and he now waits for official recognition from the FAI. You can see the flight here: