Emily Shepard and her team have been tagging and tracking condors for five years. They have learnt that condors almost never flap in flight Photo: istockphoto
Features

Andean condors, at 9kg or more, are among the world’s heaviest flying birds. Once birds get this big, the energetic costs of flapping are so high they instead rely on currents of rising air to travel long distances. Emily Shepard and her colleagues at Swansea University asked just how little flapping these condors and other soaring birds can get away with, and if there are particular environments or weather conditions that are more costly to fly in.

Very little is known about what actually makes Andean condors work, and only recently have we been able to use tagging technology to spy on them in the sky. A talented colleague of mine at the University of Swansea developed high-tech flight recorders for our team to attach to condors and record each and every wingbeat as they searched for food. The results of our five-year project in Argentina were published in the journal PNAS in June 2020.

How do you catch a condor? It takes time. A lot of time. As a field team we spent days sitting in the Patagonian steppe, drinking maté and waiting for the condors to land at sheep carcasses or bones left over from the slaughterhouse that had been specially placed to try and tempt them down.

It turns out putting the tags on is much easier than getting tags back. Our tags record 320 different data-points per second, so much information that it is not possible to send the data back via the phone or satellite network. Instead, we designed a system so that the tags would fall off the birds when they were roosting on their cliffs at night.

Using GPS location, we found out where they spent the night and used a VHF signal to recover the tag from the bottom of the cliff.

It sounds simple. But there are very few roads in Patagonia, and in order to access the condor roosts the team had to walk tens of kilometres, travel on horseback, use crampons and cross rivers while tied together with ropes. For every tag that we found, we lost at least seven.

A key breakthrough came when we started tagging immature birds, as they spend their time at communal roosts, which tend to be more in the gently rolling hills of the steppe, rather than in the high and inaccessible Andes where the adults often nest.

Our results showed that on average, condors fly for three hours a day, but they flap for less than two minutes of this – just 1% of their flight time. One bird even flew for more than five hours without a single flap, covering 172km. Surprisingly, the amount they flapped hardly changed whether they were in the Andes or the steppe, or whether it was windy or not.

Moving between weak thermals of air seemed more challenging as birds flapped towards the end of the glides, when they were likely to be close to the ground. This is a critical time as birds need to find rising air to avoid an unplanned landing. 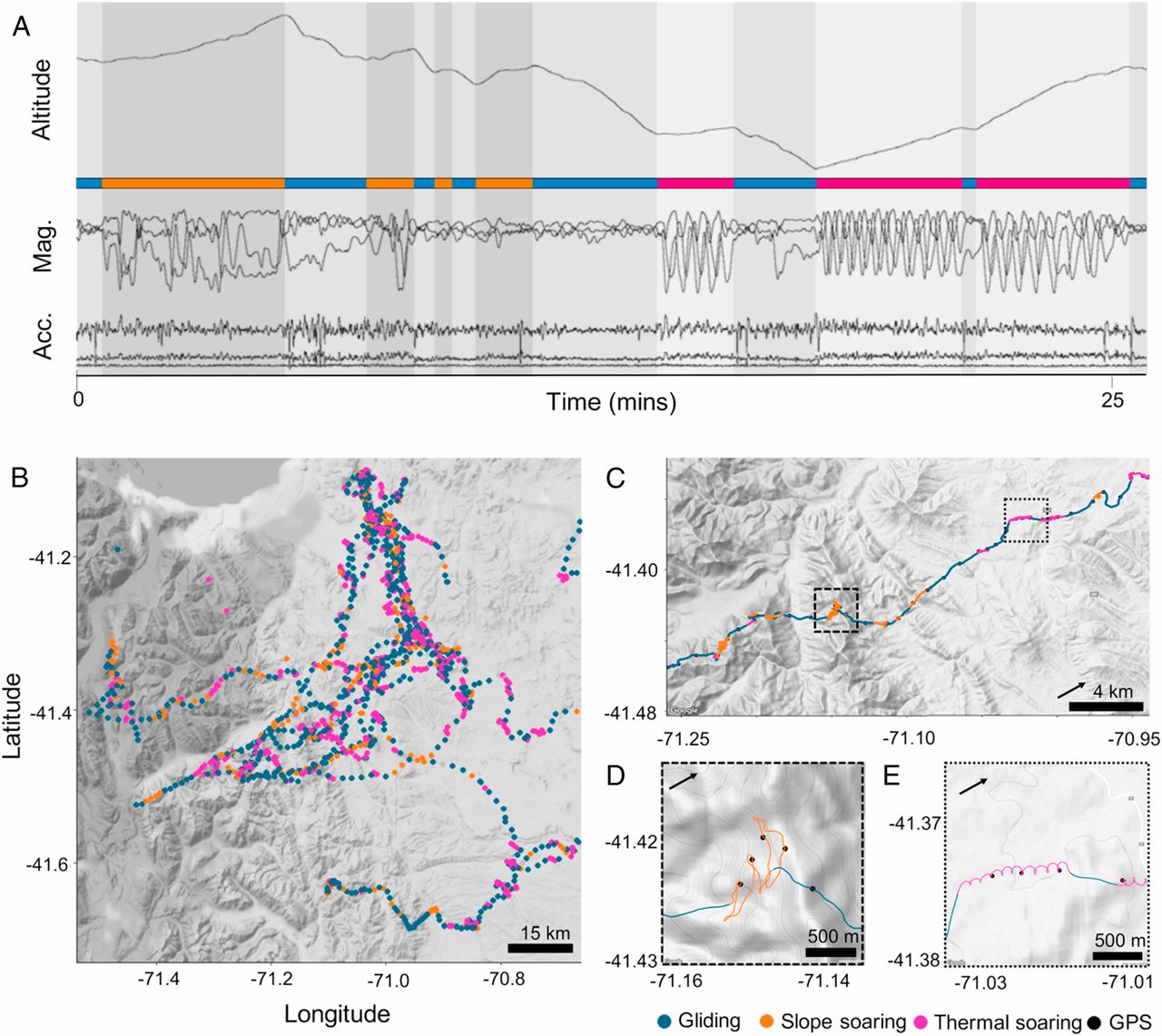 Nonetheless, even in weak thermal conditions, which may occur in winter, our results suggest condors may flap for only around two seconds per km. This remarkably low investment in flapping flight is on a par with albatrosses. In fact, albatrosses appear to flap more than condors – between 1% and 15% of their flight time outside take-off – although it is unclear how their overall energy expenditure compares.

What is particularly striking about our findings is that all the birds we studied were immature. There was some suggestion that flight performance improved with age, but the demonstration that all birds flap so rarely shows that it is possible for even young condors to invest little energy in flying.

Condors are big by today’s standards, but six million years ago Argentavis magnificens, a bird with twice the condor’s wingspan dominated the Argentinian skies. It has always been assumed that these and other aerial giants used air currents to fly without flapping. The new data from the condors supports this hypothesis and shows just how far terrestrial birds can fly without needing to turn their engines on.

The main cost for large flyers in general seems to be the energy required for take-off. In our study, 75% of the flapping observed in foraging flights was related to take-off. This highlights the importance of decisions about when and where to land. On the wing, condors are confident and often fly low overhead to investigate you.

On land they are ungainly, turkey-like birds that are rightly cautious. Their huge size means that take-offs are difficult and costly. But once up – at least in the areas they usually fly – it seems they are free to soar for hours on end.

Emily Shepard is senior lecturer in Biosciences at Swansea University, Wales. This article was originally published by TheConversation.com