Ski and fly: the joy of combo

“It’s so rare, that’s what makes it so special.” Professional pilot and filmmaker Antoine Boisselier loves nothing better than combining paragliding and skiing in the mountains. By Bastienne Wentzel.

“When a good combo day comes up, I call my friends and we just go!” Antoine Boisselier loves those rare days when the mountains around his home in St Hilaire du Touvet are still snow-covered, but the thermals are strong enough to take him and his friends up high.

On these days, they pack their XC-gliders, stuff a speedwing in the bag and don their ski gear. From the grassy launch at 1,000m AMSL they thermal up and cross the valley to the ski resort on the other side. There they top-land on skis in the snow at between 2,000-2,300m and take out the next toy in the bag; mostly a speed wing, sometimes a snowkite. They race down the mountain again, or up if the wind is good enough to kite. When they are low and the snow starts to deteriorate, they put on their paragliding gear again and fly home.

Antoine has basically invented these combo adventures, where he combines sports he loves. “I like it when you use one toy to get to a place where you can use the other toy. With a paraglider you can go up the mountain without too much effort. Also I love the feeling of being in the mountains and I love to fly and to ski and land back home with friends.”

It’s not easy to find a day on which such a combo is possible, says Antoine. There may be just four or five days when everything comes together. “It’s so rare, that makes a combo powerful and special.”

Antoine makes it sound easy, but combining sports like this requires quite a bit of experience. Most importantly says Antoine, you need to be a good mountaineer. “On one of our trips we had a great flying day with 4,000m cloudbase but when we top-landed, the weather changed fast. It got stormy in the valley and started snowing. We decided to hike up to the next summit from where we could reach the car by speed wing, instead of flying our paragliders into the windy valley. It was almost night when we landed. You have to be able to deal with these situations.” 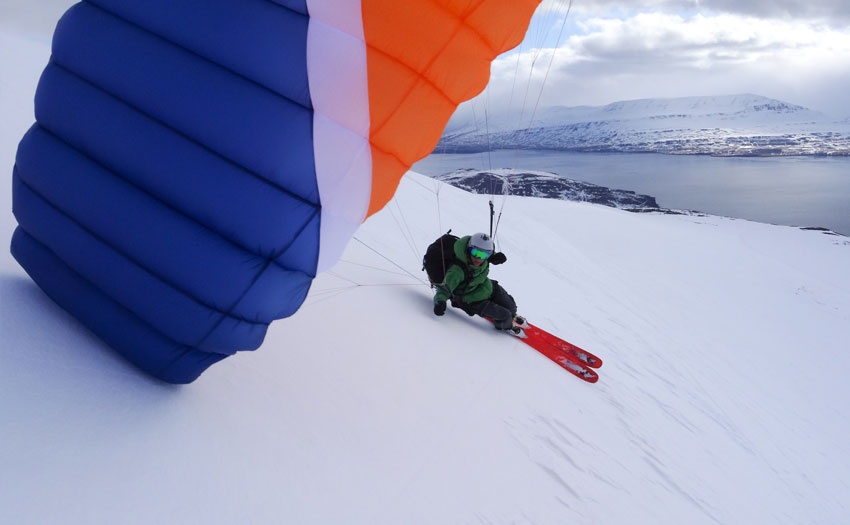 To plan a combo day, he looks for a good weather forecast with high cloudbase, and importantly, good snow conditions and low avalanche risk on the mountains. “The Southern Alps, Les Arcs or Dormillouse work very well. Around my home in St Hilaire, April and early May are best.”

A way to try it is to go to a ski resort where flying is allowed, launch with skis, take one thermal and top-land. “Pick a place that is not too remote for your first combo. Bring the lightest gear you have and be prepared to hike out if necessary.”

You can combine any sports you like. Eliot Nochez has done combos with a mountain bike and a paraglider. The only downside is the abundance of choice, says Antoine. Indeed, what do you choose on a good early spring day: a 100k triangle, perfect skiing, or both? You decide.