Fulcrum Engines have recently unveiled their PowerPod. It’s a pod harness with a motor, intended for free flyers to launch and climb out, then switch off.

The motor is a ducted fan rather than a traditional paramotor. It is much smaller in diameter than a paramotor propeller (0.5m compared to 1.1-1.4m) so it’s less cumbersome on the ground and tucks away behind the pilot’s back making it more aerodynamic.

The Power Pod is aimed at free-flyers rather than paramotorists. It eliminates the need for a hill or tow to launch from, and means you can launch in any wind direction.

Fulcrum say: “Our dream is for any paraglider pilot to have real freedom and fly whenever there is weather for thermal flying and wherever it is convenient for him!” 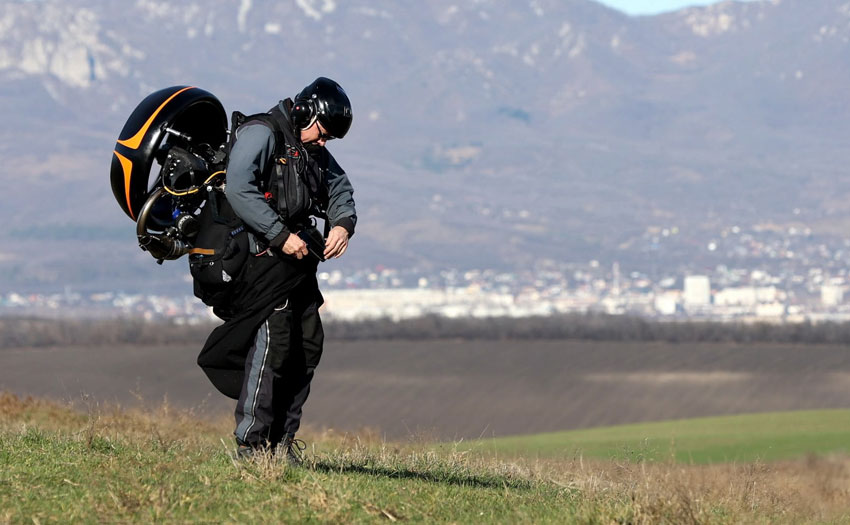 It generates 50kg thrust, which the company say is plenty for an easy take-off and a climb rate of 1.7- 1.8 m/s (for an 82-kg pilot flying the Sky Exos paraglider). Once in the air, you can switch off and forget it’s there, enjoy cross-county flying in a comfortable pod.

An added bonus is that the propeller is tucked away inside the duct, reducing the chance of it slicing through lines or anything else. The price has not yet been announced, but Fulcrum warn, “It will not cost cheaper than a usual paramotor.”

The propeller and duct bracket are made from carbon fibre, and kevlar and “good epoxy resins” also feature in its makeup – so the components and labour costs are not cheap.

Noise level and fuel consumption tests are ongoing. For more information, Fulcrum Engines have a website and a Facebook group.