Understanding the EN system for paragliders

How do we know our equipment is safe? Bastienne Wentzel finds out how our flying kit is certified

Almost every piece of equipment we use, from glider to harness, helmet and reserve, is tested, rated and certified. Having a certification system means you can rely on the quality of the equipment you are using. It also helps you choose which class of glider to fly. But how did your equipment get the classification it has?

It doesn’t matter where you buy your paraglider, before most mass-market wings are released commercially a pre-production model of the glider is sent to a testing centre in Europe, where it goes through a shock test, load test and flight test.

The shock test and the load test are done with the help of a car. In the shock test the glider is attached to a tow truck by a long line of rope with a weak link in it. Helpers hold the cells open and the truck starts driving, accelerating to about 75km/h. When the line goes tight the glider shock-inflates and the weak-link breaks (at 800kg-1,200kg depending on the maximum loading of the wing). The glider is then tested for damage; there should be none.

For the load test they attach the glider to the back of a truck and ‘fly’ the glider behind it. Then they speed up and measure the tension on the glider at the same time. After reaching a certain sustained load they stop and look for damage; again, there should be none. The load limit tested is eight times the maximum take-off weight, eg 800kg for a wing with a maximum loading of 100kg.

If the glider is undamaged after this treatment, it earns the EN 926-1 certification.

For the flight test a professional test pilot puts the wing through a checklist of more than 20 manoeuvres, from how it inflates on launch to collapses and spiral dives. Each manoeuvre is rated A, B, C or D depending on how it reacts. After the flight test the wing is given an overall classification. An A rating means an easy-to-fly, safe glider that is suitable for beginners; a D glider means the wing reacts more aggressively. 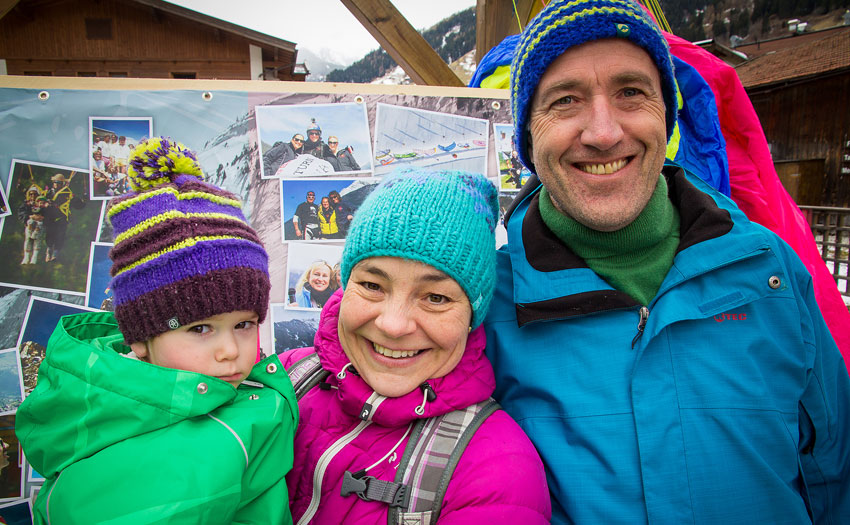 Alain Zoller, his wife Randi and their son. One of the most experienced test pilots in the world Alain has been involved in certifying paragliders since the early days of the sport. Photo: Marcus King

Testing paragliders is a full-time job for Alain Zoller, who founded the test centre Air Turquoise in Villeneuve, Switzerland in 1995. With 2.5 full-time employees Air Turquoise is now Europe’s leading EN test house and has tested more than 1,500 paragliders to the EN standard.

Developing the EN standard for paragliders was a slow process – it took 11 years before it was finalised and published in 2005. The group responsible for the creation of the EN standard is called Working Group 6 (WG6) and is made up of national federations, manufacturers and test pilots. As you can imagine, the process was slow, methodical and not without problems. However, the EN standard is now accepted as the benchmark test for paragliders throughout the world. As well as the EN standard you will also hear about the LTF standard, which is for Germany and run by the DHV, Germany’s free-flight association. The two standards are similar, and there is ongoing work to try to integrate them further.

You will sometimes hear pilots berate the limitations of the EN standard, but experience shows having set testing standards is better than not having them. “At the start of our sport there were a lot of material failures, and later there were problems regarding the behaviour of the gliders,” explained Alain. “Having a standard improved that – and saved the sport in my view.”

What happens in the flight test?

What happens when a glider comes in to be flight tested at Air Turquoise? “First we check the build quality of the glider and then we mark the canopy with tape for collapses,” said Alain. “Then we ask the right test pilot when they are available.”

Test pilots must train with Alain for a year before they are allowed to test on their own. They work freelance, and are selected to test gliders according to their weight. Small gliders need small pilots to test them; large ones need bigger pilots.

Once the test pilot, glider and the weather are all lined up the testing can begin. “Normally, it takes three runs to perform all 23 tests,” Alain said. Testing is done over water with a rescue boat on hand. The flight and manoeuvres are all filmed from the ground, with cameras on the pilot too.

The aim of the test flights is to determine the glider’s EN classification – EN A, B, C or D – and assess the passive safety of the paraglider. Passive safety is the behaviour of the glider without the pilot intervening. They literally pull a collapse and then wait to see how the paraglider reacts.

The test pilot rates the behaviour of the glider from A to D or F (for fail) in each manoeuvre according to a precise list. The highest rating determines its overall class. Therefore, a glider with all A’s but one C is classified as an EN C glider.

In this way the test is done as objectively as possible. “We keep our opinions to ourselves,” Alain said. “If there is any doubt about the reaction of a wing we take the images from their onboard camera to see what movement the pilot makes. If there is really something we want to say we go to the manufacturer and discuss it with them. The tests are really specific.” 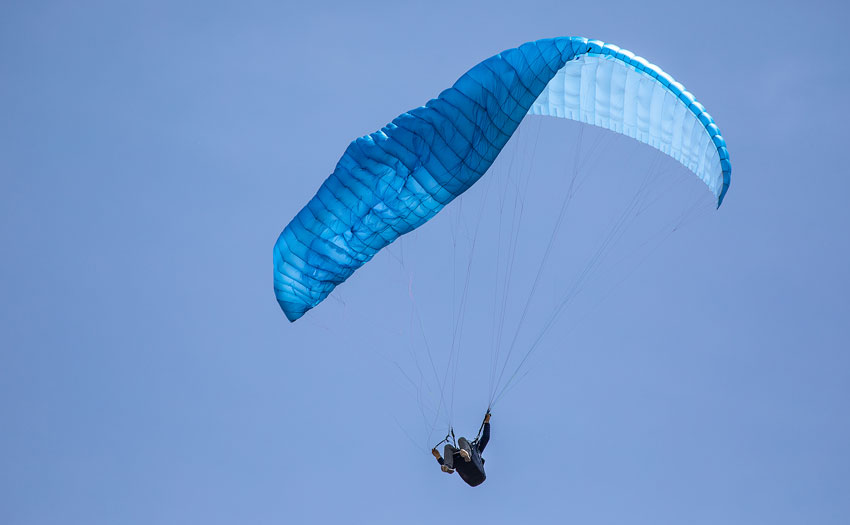 Testing a glider for how it responds following a large side collapse. Each test is specific – in this case the glider must collapse an exact amount and at a certain angle, all the way back to the trailing edge. Glider: prototype. Photo: Marcus King

Borderline results always prompt a discussion. “If there is doubt we can put a higher rating in one of the tests, for example when the results of a few tests are borderline. Recently, we have seen some gliders very close to B. But if the manufacturer wants a C, we put a C in some of the tests.”

Manufacturers know what classification they want for their glider, and it is not to their advantage to try to squeeze an advanced wing into the B class, for example. They simply end up with the wrong type of pilot flying their glider, which leads to accidents and negative feedback.

Once the flight tests are done the paperwork is completed and the report is published.

Testing for CCC competition gliders is different, as they lie outside the EN system. “If we are testing a competition glider we ask for a shock test and load test first, and then we ask the manufacturer to make a demo flight. In the past, we had problems with these gliders being too unpredictable.”

It’s not only gliders that have to be certified. Harnesses must be able to carry a load without damage to the webbing, and the back protector, whether airbag or foam, must absorb shock effectively. If it passes, it gets EN 1651 certification.

In a weird quirk, if a harness has no back protection it can still get EN certification. The argument seems to be ‘you can’t test what isn’t there’, which is how car seatbelts used to be tested decades ago (if a car had seatbelts they had to meet a certain standard, but if the car didn’t have belts that was fine too). In this respect the LTF standard is clearer: if the harness does not have back protection it will not get LTF certification.

For reserves, the maximum descent rate is one of the important requirements to pass EN 12491: they must not descend faster than -5.5m/s

Apart from the obvious safety benefits, the big advantage of the certification system for pilots is the classification, which gives an idea of the level and behaviour of paragliders just by looking at a single letter. But it is a mistake to fixate on that letter when you come to buy a paraglider. “The philosophy is that we want to compare gliders,” explained Alain. “That’s why the tests are done by a professional pilot according to the standard. But in other conditions the behaviour can be super different. We don’t categorise handling.”

You should not buy a glider just because of its classification. Not all gliders in the same class are equally manageable; some will be more demanding. This is especially true for the EN B classification, which stretches from easy beginner wings to demanding high-B gliders for XC.

“The B-category is too big,” agreed Alain, “and we need to find out how we can split this category … [but] the process to change the EN-standard is very long.” Changes to the EN standard need to be discussed and agreed on by all parties in WG6, and indeed that is happening. “The discussion that is going on now is about the B category. My personal view is that we should not change the classification A, B, C, D because pilots are used to it and it’s not too bad. A solution can be to create A/B and B/C categories.”

That is not the only change to the EN system that is on the horizon. Currently there is a rule that any paraglider that uses extra “folding lines” to induce collapses is automatically given a D. (Since A-lines are now set quite far back from the nose it can be hard to induce test collapses using just the glider’s A-lines, so an extra set of lines is added to the glider during testing to help the glider collapse in the manner needed.)

“Until now, the use of a folding line would automatically earn the glider a D, even if it was otherwise an A. In WG6 we have proposed an amendment to allow folding lines for EN C. If accepted it will come into effect this year.”

Changes aside, in the meantime how should pilots approach “reading” the EN class of a glider?

“Buying a glider only because of its class is wrong,” said Alain. Instead read the test report, talk to dealers, read the manufacturers’ websites, and “then go fly the glider”. At the end of the day, “The best glider for you is the one that you can test and say: ‘Wow, this feels good!’”