The Red Bull X-Alps announced its line-up for the 2019 edition with a mix of old and new faces, including race legend Chrigel Maurer and two women athletes.

Returning for its ninth edition on 16 June next year, the 32 athletes for the race were revealed over six hours on 16 October 2018. The Red Bull X-Alps is billed as the toughest adventure paragliding race in the world and sees pilots racing 1,000km from Salzburg to Monaco on foot and by paraglider only.

The full pilot list includes 14 “rookies”, pilots new to the X-Alps, and 18 pilots who have competed before.

Top of the list is Chrigel Maurer (SUI1), who has five race wins under his belt and is still considered a race favourite.

Veterans who will be gunning for Chrigel include Paul Guschlbauer (AUT1, competed four times) and Aaron Durogati (ITA1, three times).

Romania’s Running Man, Toma Coconea (ROM) is back for an incredible ninth time – he has competed in every edition but never won it. He is famous for his epic endurance runs on the ground.

France has four very strong pilots in contention and collectively will be looking to be the first non-Swiss nation to lift the Red Bull X-Alps trophy.

Benoit Outters (FRA1) is an ace pilot and world-class trail runner who finished second in 2017. Gaspard Petiot (FRA2) led the race in 2017 for a time until a minor injury on landing put him out. Antoine Girard (FRA3) is one of the world’s leading adventure pilots and has massive experience, although an injury on take-off last race put him out early. Meanwhile, rookie Maxime Pinot (FRA4) is a PWCA Superfinal winner and expert comp pilot who has recently turned on to adventure flying.

Looking to take on the Europeans, Nick Neynens (NZL) will no doubt put in a strong showing. Now in his third edition his recent flying expeditions and back county vol-biv trips have only get wilder and more remote. Meanwhile, Gavin McClurg (USA1) is back again for a third time, with US team-mate rookies Willi Cannell (USA2) and Cody Mittanck (USA3) also flying the Stars and Stripes.

Kinga Mastalerz (NZL2) and Dominika Kasieczko (POL) are the two women rookies. Both are strong adventure and XC pilots. 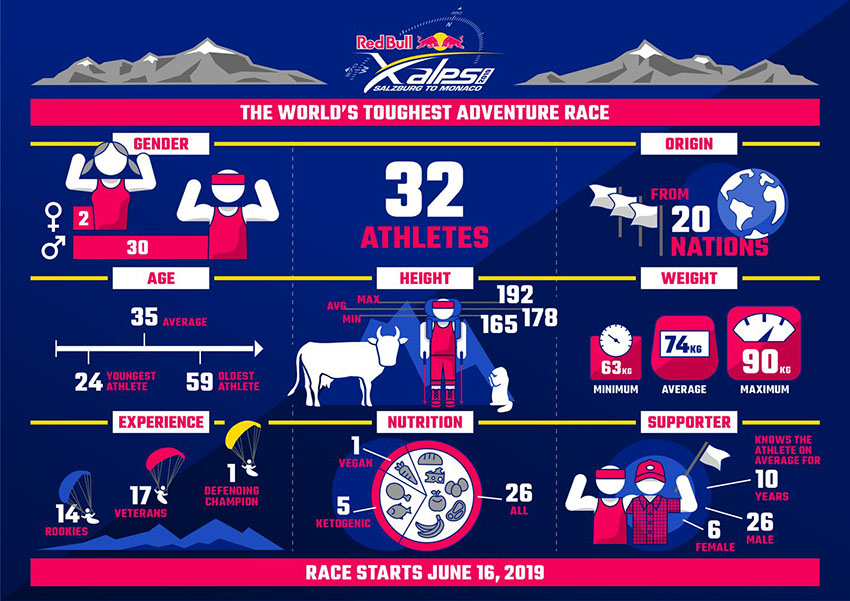 Announcing the new line-up race director Christoph Weber said: “For 2019 we have a thrilling mix of both newcomers and seasoned pros. It was extremely difficult choosing from such a deep pool of talent, but we’re excited to see this highly competitive field go head to head in the mountains.

“You’ll notice 18 familiar faces who have earned themselves another shot at glory, but there are also 14 rookies who we believe have the potential to take this race by storm. If they have the hunger and commitment, we could be in for some real surprises!”