Airing out an AirDesign Donut in the landing field. Photo: AirDesign
Skills and learning

How to look after your reserve parachute

Don’t just stick a reserve in your harness and forget about it. You need to care for it, regularly repack it – and understand it. Chris White repacks over 100 parachutes a year – and there are some all too familiar problems…

“In general, avoid anything that could compromise the system – and that includes all those seemingly neat ‘tricks’ that your mate might tell you about. For example: “Don’t tie your bag to your reserve. It’s really bad practice. I feel similarly about tying a float to the handle. You want to avoid anything that could interfere with the deployment. Is it really worth risking it to save £20? I don’t think so.”

You also need to understand how your reserve could be suffering unseen damage, most commonly from Velcro. “Be very careful of the male [sharp] side of Velcro. It can very easily damage the bridle, the outer bag and the parachute lines. I’ve even seen it rub through the bag and create holes in the reserve. It’s more and more common to see harnesses using zips instead of Velcro for the channels, which is brilliant.

“Basically, it should be stressed that if there’s any excess of male Velcro it should be on the outside of the channel, where you can see it and it can’t do any harm. Velcro damage is something we come across in around 50% of repacks. The trouble is, if you have a bridle damaged by Velcro the only way to test it is to do so to destruction, which isn’t much use. There’s no other way to know how much it has been weakened.”

And make sure you’ve put a repack in your diary. “The BHPA (British Hang Gliding and Paragliding Association) recommends a repack every six months, but many manufacturers recommend every 12 months. Personally, I do mine every 12 months. But you also must be very aware of the lifespan of a parachute, which is something that is often overlooked.

“Most manufacturers recommend that you don’t use one for more than ten years, but I did one repack recently where there was a parachute from the 1970s. There’s still a lot of very old kit out there. After about ten years, the material visibly starts to degrade, which may very well affect the sink rate.” Getting your reserve wet is also not a good idea. “Immersion in water is never good, and this doesn’t just mean landing in a lake under it.”

Saltwater obviously does all sorts of unseen, corrosive damage, but Randi says the Air Turquoise team have also noticed the characteristics of reserves often change after a water landing. “For EN certification, we test all the reserves twice to ensure that the results are the same, but if we do the test a second time with the same reserve after a water landing, it will often fail. Water landings tend to make the fabric more porous, especially with lightweight systems. Basically, if you land in water or get your reserve wet, get it checked straight away.” 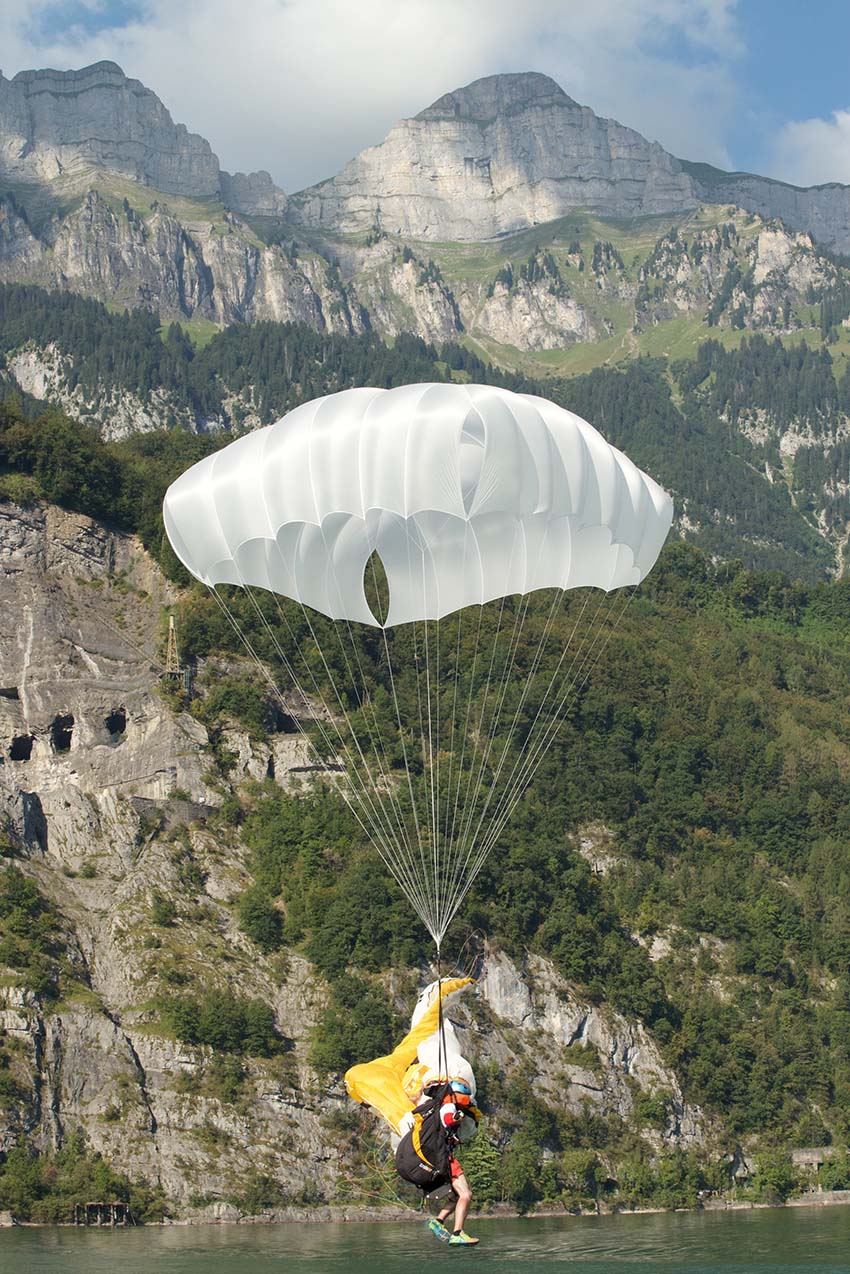 Coming down safely under an Ozone Angel Square reserve – but about get wet. Photo: Ozone

Chris adds: “You can also get it wet by sitting on it in a field. In fact, you should never sit around in your harness on your reserve. Sand can also be very aggressive if you land on a beach, as can snow. Your reserve isn’t particularly sealed when it’s in your harness – you have to be aware of that.

“Interestingly, the degradation happens to both reserves and paragliders irrespective of how often they are used. In fact, the age of the equipment is as big a factor in determining how degraded it is as the amount it has been used. Even if you’ve got a reserve that has never been used or even seen the light of day, the material still degrades with time.”

You should also get your reserve checked if you have an accident, even if the harness looks fine. The reserve could have been dislodged.

“You either need to be very familiar with your system or take it to someone who is,” says Chris. “I checked a friend’s recently and he had been to a club repack where it had been put back incorrectly. It was supposed to go into a neoprene envelope, which had been missed – and the next time he flew with it, it actually ended up in his pod.

“When I repack reserves, I encourage the owners to attend so they get familiar with their own system. I think people who don’t understand parachutes and how they work are less likely to throw them should the need arise.

“You should also be happy doing a pull test on your reserve, so you can check it works and then put it back together exactly how it was. One of the most common problems we come across is that the lanyard that connects the handle to the parachute bag goes tight before the pins release. That means you can’t get the reserve out of the harness in the first place.

Chris is strongly in favour of using stainless-steel maillons for connecting one component to another. Twenty years ago, a French pilot was killed when a fabric-to-fabric connection (a larksfoot knot) in the reserve melted through friction (the ‘hot-knife effect’). Today, materials technology has developed a long way and lots of harnesses use fabric-to-fabric connections with no problem.

The is, if you are not sure, don’t make it up: look in the manual first, then ask for qualified or professional advice from your dealer or instructor.