Pascal Vallée strides across the sand, lays a hand on my shoulder and in his seductive Gallic lilt mutters seven words. “Take your time … it’s like a dance.”

It sounds simple enough, but there are two niggling problems: I can’t dance, and for today’s tango I’m wearing a chugging 25-kilo two-stroke paramotor engine. For this intermediate paraglider pilot, used to flying with lightweight kit, it’s like being paired with a filing cabinet. But then Vallée is the French national coach and a former world champion so orders are orders – and dance I must.

The wing comes up at an angle, but two light steps to the right, one back and a gentle pirouette later and I’m squeezing on the throttle and running upright for the horizon. I’m not entirely sure what I’m doing, but with each stride, I feel my weight diminish – then gently evaporate in a puff of exhaust.

I climb quickly through a flock of skirling seagulls, and off into a clear blue sky. Beneath me, the Arabian Sea laps against a beach patrolled by a pair of camels and a tight little cluster of awestruck children. It’s sunset, but the air is still bathwater warm – and the sand is washed in a blaze of pink light. Ahead of me, an old fort crowns a sun-baked crag. Not bad for December.

We are at Suwadi, an hour’s drive outside of the Omani capital, Muscat. The beach is huge, a space that can’t be measured in football fields. From the ground, it seems as big as Wales, a sandy Belgium. It is its own country, anvil flat and licked by a gentle afternoon breeze as certain as taxes. The sand is solid under a run, but gives enough to cushion a tumble. The sun shines, it is empty – there can be few better places to learn.

Oman is perhaps an unlikely place to take up paramotoring, but this heel of Arabia is the perfect antidote to the northern hemisphere’s winter gloom. The blowtorch desert heat becomes a Mediterranean glow between December and April and a blanket of high pressure brings the stability needed for paramotoring. It lacks the opulent braggadocio of Dubai – more Arabian Nights than skyscrapers and supercars – and has an easy charm that belies its inhospitable, Martian landscapes.

It is also home to a new, British-run paramotoring school. Seeing a gap in the market, Alex Ledger, who runs SkySchool UK in Wiltshire, opened an outfit here at the end of last year. Alongside veteran pilot and instructor Zebur Mercan and the spectacularly bearded former Royal Marine Seth Royce, Ledger hopes SkySchool Oman – which runs a range of APPI PPG paramotor courses – will attract both beginner and veteran paramotorists from around the world. It’s early days, but the fact that Pascal Vallée, now also an APPI PPG master instructor, is among the first to visit surely is a promising omen.

But can any relatively competent paraglider pilot pick up a paramotor and take to the skies with ease? Well, yes – it just takes time (it generally takes six days for a qualified paraglider to achieve the APPI PPG pilot rating), patience and a little humility. And as I discovered, launching is where your skills and habits are most exposed.

“Paraglider pilots tend to rush their take-offs,” says Pascal. “Because they are often launching in rough, unstable conditions, paragliders often pull up their glider, turn and go – quickly. They don’t hang around. But while you can take off in paragliding with very poor groundhandling skills, in paramotoring this is impossible. You must make sure your wing is perfectly balanced before adding the throttle.”

The engine is an added distraction – to say the least. On first wearing, it’s heavy, bulky and boom box noisy, hardly conducive to being nimble under the wing. And to complicate things further, when you make your take-off run, you must never, ever lean forward over your chest strap. “The thrust from the engine will just blast you face first into the ground,” says Zebur. “You must run upright, with your back straight.” In other words, you have to relearn your launch.

With new variables to master, it seems the (relatively) swift muscle memories I have developed under a paraglider have been replaced with sluggish thoughts – and my first few tries are object lessons in how not to do it. On my first attempt, I am distracted by the motor, turn too quickly and step under the wing too late. On my second, I return to paragliding mode, lean over the harness, feel the thrust pushing me into the ground and stop short. I’m reminded of day one of my paragliding course.

But the course also involves plenty of groundhandling, from launching with As and Ds (a must here) and tip-touching exercises to running small marathons with a straight back and the wing over your head. Having a motorcycle engine-powered leaf blower on your back may feel alien – and a little ridiculous – at first, but it doesn’t take long to settle. Especially once you’ve learnt the dance moves.

The flying itself is spectacular. Paramotoring is ideal here in the late afternoon once the thermals unwind and the slanting sun sets the sand and rocks alight. We putter along the coast and over groves of nodding palms. There’s nothing to Suwadi, but it’s surely at its best from the air. And while paragliding purists will miss decoding the landscape and the predatory hunt for lift, there’s something to be said for having it at your fingertips – at least occasionally.

But isn’t it just cheating? “So what?” says Alex. “Everyone hates paramotors on the hill, but we can fly when they can’t.” And he does have a point – even if they do make you sound like a hooligan.

There are, of course, a few further differences in flight – not least the torque effect. Depending on the machine, the rotating propeller drives you perpetually to the left or right. And the effect increases with throttle. A little brake or weight shift solves this problem, though, and those who have never flown a paraglider before tend not to even notice it. 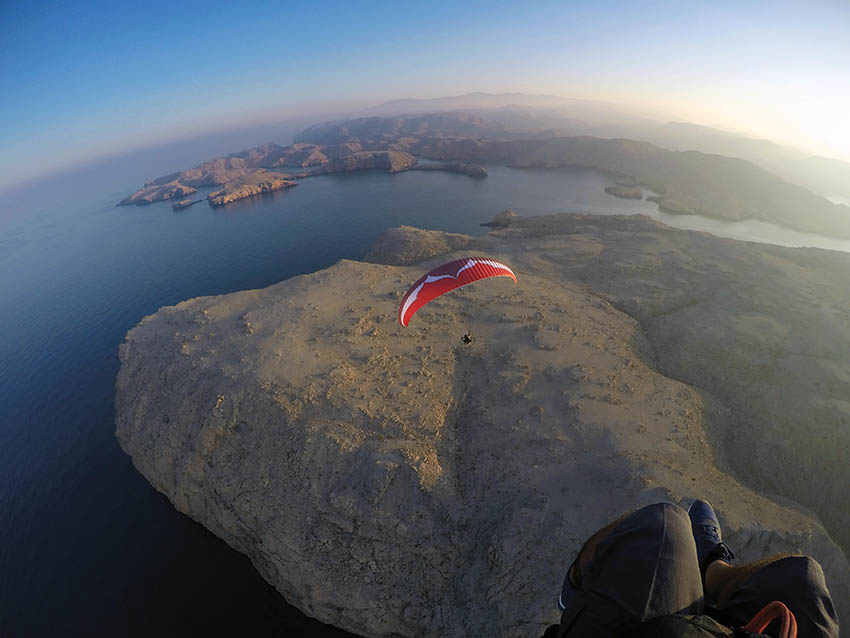 Landing even remotely badly with 25kg of machine on your back is also a no-no, but this only further focuses the mind – especially when my learner paramotor wing appears to sink like a stone compared to my paraglider. In fact, love them or loathe them, learning to paramotor will sharpen your flying.

Of course, there’s far more to Oman than the long, barren beach at Suwadi. SkySchool have a number of teaching sites and will soon offer tandem flights into the interior on their doubleseater XCitor trikes. Two hours from Muscat, Wadi Shab is a lush, green oasis which carves its way through a craggy canyon, a place to escape the heat and float in cool, green natural pools.

Further afield, the peaks of Jebel Akhdar rise 3,000m over the dry plains, topping out at the summit of Jebel Shams. This mountain landscape is another world of remote villages and vertiginous canyons. There is likely to be paragliding among these eerie peaks, but for now it’s pioneer territory.

And then there’s the spectacular Wahiba Sands, a vast dune sea, where the mountains of sand tower hundreds of feet high and there’s nothing but the sun and sky. Crossing this expanse by car is a trip of a lifetime, but the possibility of powered flight here is even more tantalising. The XCitor trikes should be in their element.

Getting the best out of Oman requires some planning – even finding a post-flight beer calls for a little insider knowledge (the country is largely dry) – but paramotoring here certainly opens up one of its greatest assets: its endless blue skies.

To explore them fully, you just need to dance.