Thermalling at base in the Swiss Alps. Photo: Jerome Maupoint
Skills and learning 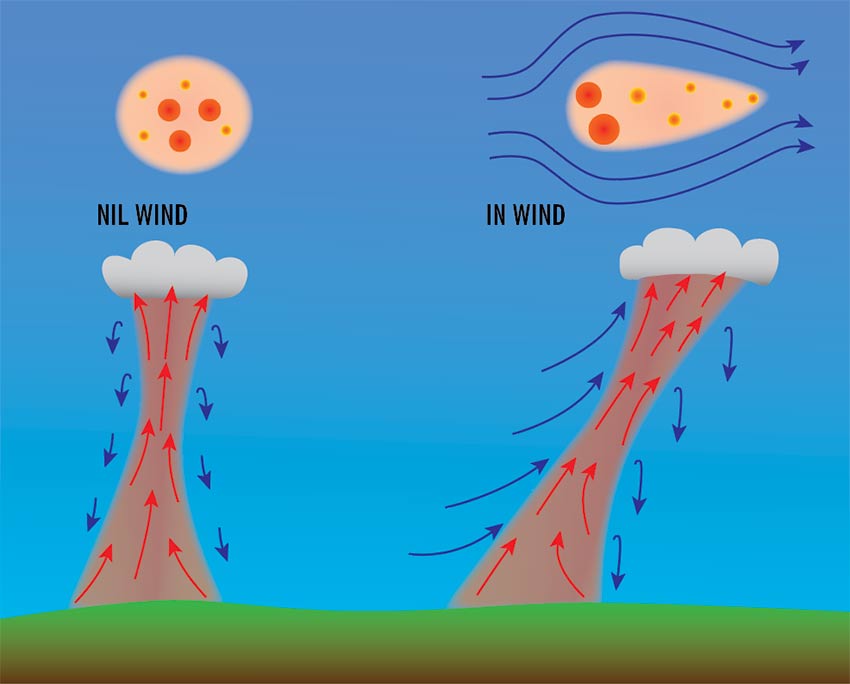 The effect of wind on a thermal – the strongest lift is on the upwind side.

In nil wind, in can be useful to think of thermals forming like mushroom clouds, with a main core dotted with hotspots of extra strength. But in the wind it all changes and things can difficult. Here are five things you need to know about flying thermals in the wind.

1. Wind distorts the column of lift, tilting it over at an angle. Because a thermal actually has its own mass the wind blows around it and up it rather like a mountain face. That airflow on the front of a thermal produces dynamic lift like a mountain face too. If you have ever soared up the outside of a cumulus cloud you will have experienced this.

2. The airflow around the sides and behind a thermal can also get disturbed. Think of it in the same way as wind flowing around a more solid and tangible object, like a tall building. This causes turbulence and can be a cause of those unexpected whacks you sometimes get on thermic days.

3. Inside the thermal are hotspots, or micro cores. This is the stuff we pilots love so much and hone-in on with our instruments and intuition. They are formed by hotspots on the ground that heated the air that formed the thermal you’re now climbing in. Cores travel upwards faster than the rest of the thermal. They have a greater vertical velocity than the weaker lift so they are less affected by the horizontal wind.

5. In comparison, the downwind side of the thermal is a bleak place to be. The lift is weaker, and should you slip out of it you fall into the leeside sink of the thermal and have an upwind struggle to get back to the thermal. When you do get back in it, you arrive back in the weakest lift. If you’ve ever been thermalling with another pilot and seen them fall out of the climb and plummet like a stone, you know they’ve found the downwind edge of the thermal for you.