A close-up of the Ozone Zeno (EN D). Although two-liners have two main lines, As and Bs, they split higher up to make four attachment points on the glider. Photo: Ozone
Skills and learning

Thinking about stepping up to a two-liner? Flyeo paragliding school owner and SIV instructor Malin Lobb has some advice.

There is still a stigma attached to two-liners from the reputation they gained when they were first created over a decade ago. These first prototypes, flown by test pilots in high-level competitions, were unrefined “true two-liners”.

They had two attachment points at the wing, As and Bs, and, unlike today’s wings that have the As and Bs split chord-wise in the upper cascade to form four attachment points, they could produce some undesirable results if and when they departed from flight. These were the golden days of Open Class, with trimmers and no speed-bar limiter.

Fast forward to 2020 and you will see that the manufacturers have not been mucking around. After 12 or so years of refinement two-liners have never been so accessible and, more importantly, have never been so nice to fly. So what, if any, are the differences you will find when moving on to a two-line paraglider?

I don’t want to dwell on the power two-liners have, but I will say they are powerful gliders because of their category and the fact they are made as performance gliders, not because they have a two-line configuration.

Due to the nature of current EN certification, two-line technology has only trickled down to EN-D territory, where you would expect powerful gliders to be. With changes to how certification is made we could well see two-liner technology in the EN-C category, which would open up a whole new level of possibilities within that range.

The sticking point, as many of you will be aware, is the current requirement that any glider that uses extra collapse lines to induce collapses in the EN certification test is automatically given a D rating.

Once you get used to using the B-handles it will change your flying forever. Using the B-handles while on bar feels like an extension of the brakes. And over time, when you learn to trust the B-handles, you can use them as if they were the brakes: catching collapses and controlling the glider’s pitch and roll throughout the entire speed range.

This is not only more efficient, as the profile of the wing isn’t being distorted, but you feel a true connection with the wing that cannot be replicated with a three-liner. 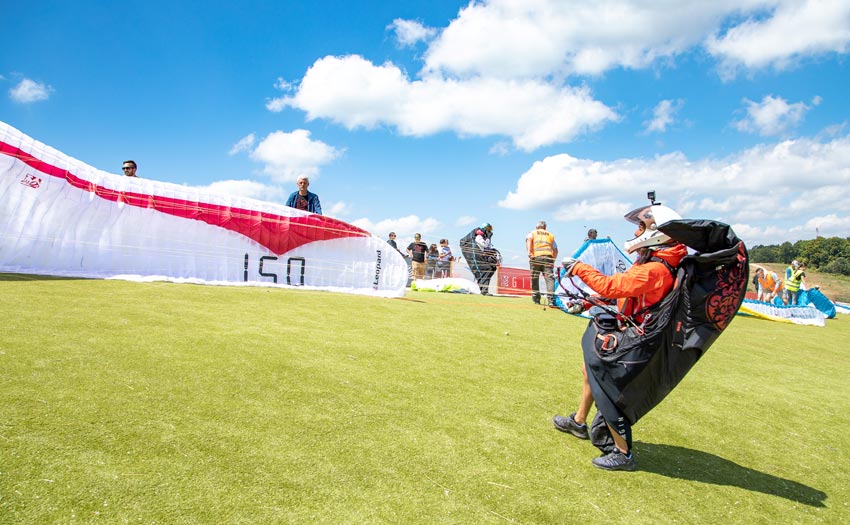 Current two-liners have a lot of reinforcing rods and a lot of spanwise tension, which can make them act like a block. It gives them a solid feeling in the air, but of course when they do collapse they tend to go as one block as well.

If you’re looking at stepping on to any EN-D, let alone a two-liner, I would expect you to be well versed in SIV. That means being able to confidently backfly and deal with any energy caused from a frontal.

As two-liners have fewer lines they have more distance between each line. This means there is more space to catch the cloth of your glider. So if you happen to have a collapse you might find it is more prone to cravats. Again if you are flying an EN-D or above I would expect you to be able to deal with a cravat efficiently by half-spinning it out.

When it comes to flying into wind penetration is king. One thing you will notice when flying a two-liner is just how much better the performance is into wind than any other glider you have ever flown.

Whether you are on a task in a competition or trying to close a triangle on a cross-country flight, having that added performance when battling upwind can be the difference between flying like a bird or standing in a field like a cow.

If you’re a higher-level pilot you might find your first flight on a two-liner to be remarkably similar to that of other wings you have flown. And that really is the big secret with two-liners these days: they are just another glider, albeit with a few subtle differences.

If you are still unsure about taking the step into the world of two-line EN-D wings, when this technology bleeds down to lower-rated gliders give it a go: you might never look back.