Not many know this, but UP have been beavering away at two-line technology ever since their first open class two-liner, the Edge XR, was released in 2012. This, six years on, is their first certified release, and it’s exciting to see, because the two-line D market is so dominated by one brand.

Ozone’s Zeno has had phenomenal success – though arguably Niviuk’s 2015 Peak 4 is an easier, more accessible wing to fly, and has been unfairly sidelined. Nevertheless, in terms of popularity, it is Ozone’s machine that draws the most obvious comparison when any new two-liner is released – and UP both expect and welcome this comparison.

Both Seb and I have each flown over 100 hours on the Zeno – me on the MS, and Seb on the ML – and we’ve both got experience on the Enzo 3 too. We flew the Meru in both MS and ML sizes for this review, including some back-to-back flying with the Zeno.

UP are out there as a solid brand, and the longest established by several years. Designer Franta Pavlousek has a well-organised testing set-up around the company base in Garmisch, Germany. We absolutely loved the Trango XC3, UP’s sports wing released in 2015 – it was a total joy machine, one of our favourite ever handling gliders. Since then, neither of us haven flown any other UP wings so we both came to the table curious and expectant about their first certified two-liner. 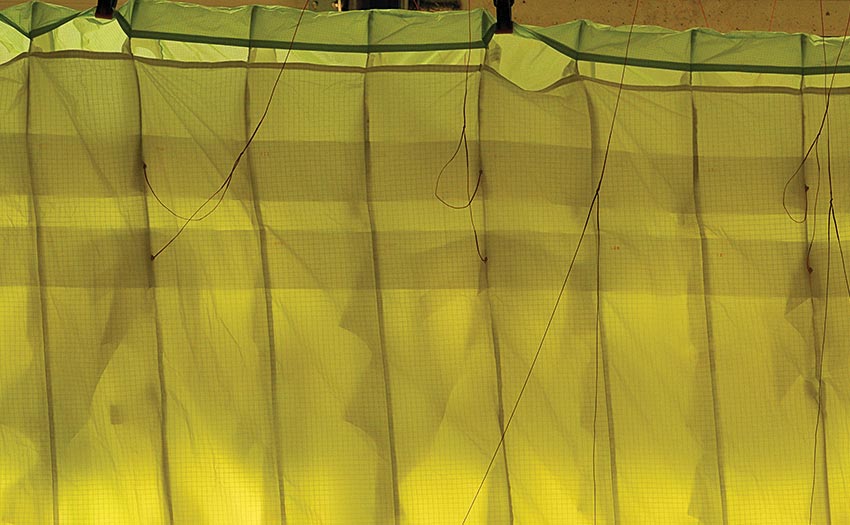 Centre rods run for 150cm of the 205cm undersurface chord

This is a 6.9 aspect ratio machine with 84 cells, and the double 3D panel shaping creates a beautifully clean, smooth top surface with no noticeable billowing between each cell – it’s really impressive. The trademark swept-back tips of designer Franta Pavlousek and the green, black and white colour-scheme mark it out as classic UP. In terms of its span-wise shape, the Meru has a higher arc than the flatter Zeno.

Three sizes are now available, with slightly different weight ranges to other UP models or indeed other two-liners. The SM is for an all-up range of 90-105 kg, making it particularly suitable to 100-105 kg pilots. 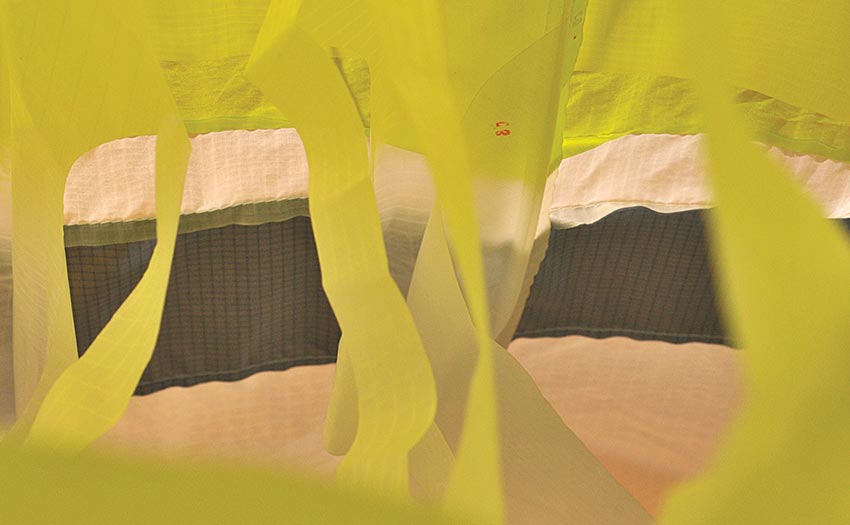 Long plastic rods run back from the leading edge for around 75% of the chord – the centre rods run for 150cm of the 205cm undersurface chord. Mini-ribs are stitched just under the top surface of the trailing edge.

There are six main lines per riser, plus a stabilo line and brake line. More on this later. Like most other two-liners, the central swath of A’s bifurcate with two attachment points – one forward of the other. The brake fan distributes the initial pilot input more evenly throughout the trailing edge, whereas the Zeno initiates it more definitely on the tips. 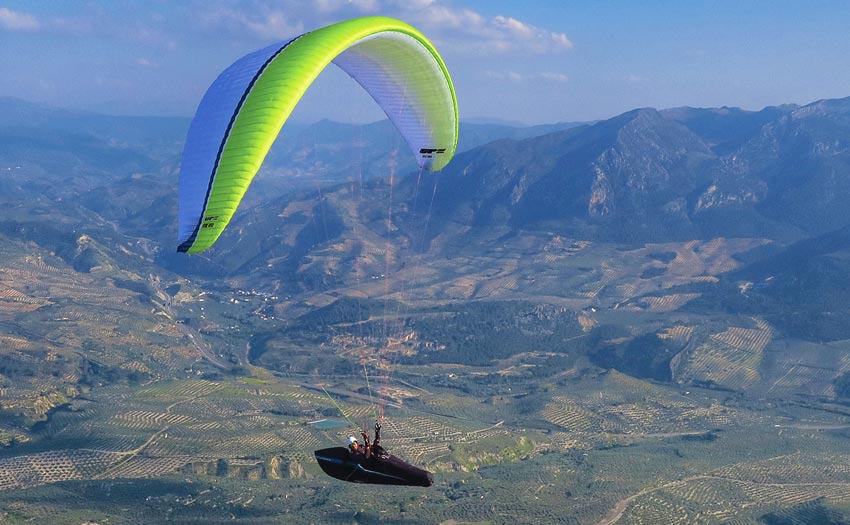 It’s easier to handle in thermals, with less ‘catch-the-dive’ characteristics than the Zeno, and seems to glide as well as anything up to 53km/h or so
Photo: Xevi Bonet

On the ground, the wing rises slowly to the 3/4 position – a little like the Triple Seven King, needing more encouragement on the A’s – then accelerates quicker to be overhead. We had no issues with forward or reverse launches.

Straight from the off, the Meru is delightful and reassuring to fly, with quite taut, precise brake travel – quite comparable to the Zeno ML, and a little more solid, and a little more pressure on the arms than the Zeno MS. It gives a reassuring three-liner type feel on the brakes, and Seb really noticed how easy it is to thermal. It is really pitch stable, and he enjoyed lots of one-handed climbs.

The Meru really only transforms into ‘two-liner mode’ on bar. As soon as you push even a smidge – whoosh, the leading edge dives and accelerates, and you can feel the glider surf through the chop a little more intensely. Rear-riser control is direct with no surprises.

On our first day’s flying, we had a fantastic half-hour of chasing friends around low down in ridge lift. The Meru felt nimble, fun and its energy was a joy. In weak thermals, you get nice little nudges as to what’s going on. Neither of us flew it on a really pumping day, so can’t comment there, but the spanwise tension feels really good, and we would expect it to hold its form well in stronger air.

Seb found the thermalling easier than with the Zeno. The Meru is a little more ‘nose-up’ and doesn’t need to be caught in surges like the Zeno.

Though very positive, we found the brake travel to stall shorter and less progressive than other Ds. We both found we needed a little more care when flapping in to land, or pulling deep brake on one side when slope landing. Having loaned the wing to other pilots to check out our experience, four out of five of us agreed on this point, with one commenting that even if the range is a little shorter, this behaviour is within the skillset of EN-D pilots. 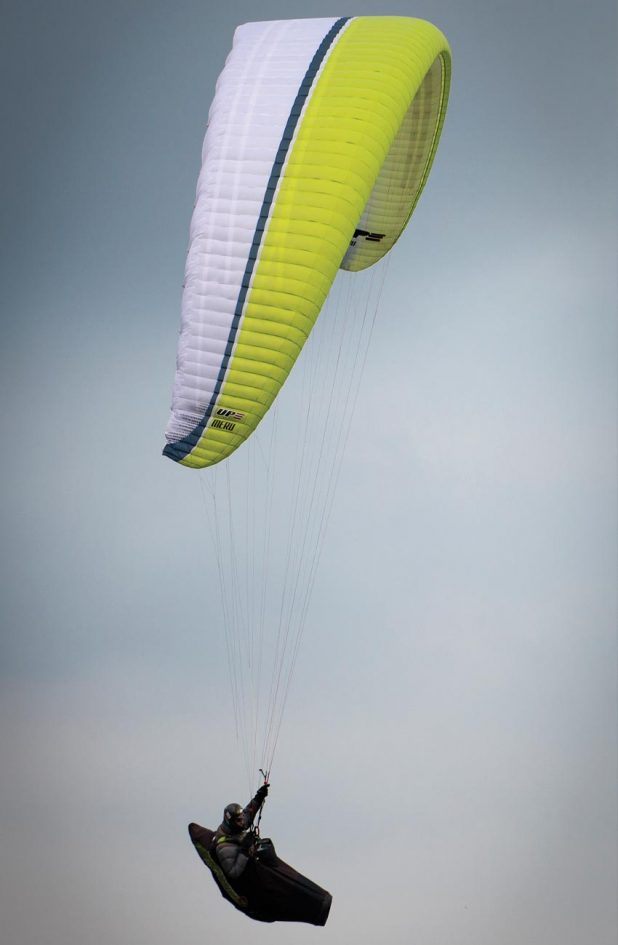 Flying at the UP Testival in Bassano, Italy in March. The wing is instantly recognisable with swept-back wingtips and a classic UP colour scheme. As an EN-D two-liner it enters a market that is dominated by Ozone’s Zeno. Photo: Frank Fleischmann

Brake pressure remains linear as you push down below the mandatory 50cm brake range required to pass EN certification, and then the glider nods back. Worth noting – and trying to build into your muscle memory the amount of travel required.

Like some two-liners, big ears aren’t possible. I wondered if the A’s are set back any further than they are on the Zeno, which is designed to big ear (albeit messily), so measured their placement. They are very similar on the Meru SM and the Zeno SM, but the difference is that the Zeno’s stabilo line bifurcates from the outer-A, whereas the Meru has a separate stabilo that runs right down to the maillon.

It means that as you pull the outer A maillon (which has two lines – the stabilo and outer A), the wing tip just pulls towards you, rather than collapsing.

Wingovers are intuitive and fun – they feel more ‘three-liner’ in their ease of control. The Meru gives a positive return of information throughout each one. 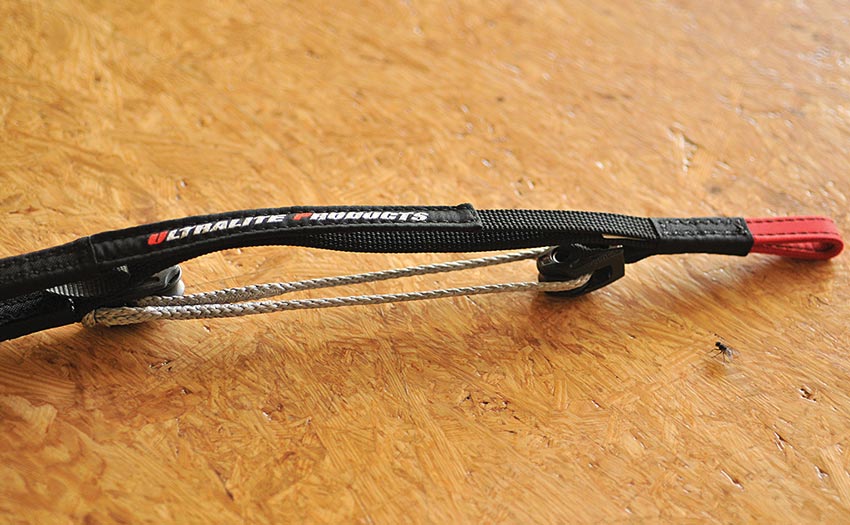 However, after landing and weighing myself, I found I’d deviated from our own self-imposed required wing loading of 3kg below the top of the certified range. I had been flying the MS at 99kg: 6kg below the top.

At this wing loading I recorded a trim speed of 37km/h, and a top speed of 52-53 km/h. It is quite likely that with the extra weight, top speed will increase by a further 2 km/h or so. Remember, these recordings are calibrated to sea level – GPS speeds may be significantly higher at altitude.

Seb spoke to UP team pilot Ernesto Hinestroza who said they knew the wing was a bit slower than CCC wings, but that its handling and climb performance more than made up for it. 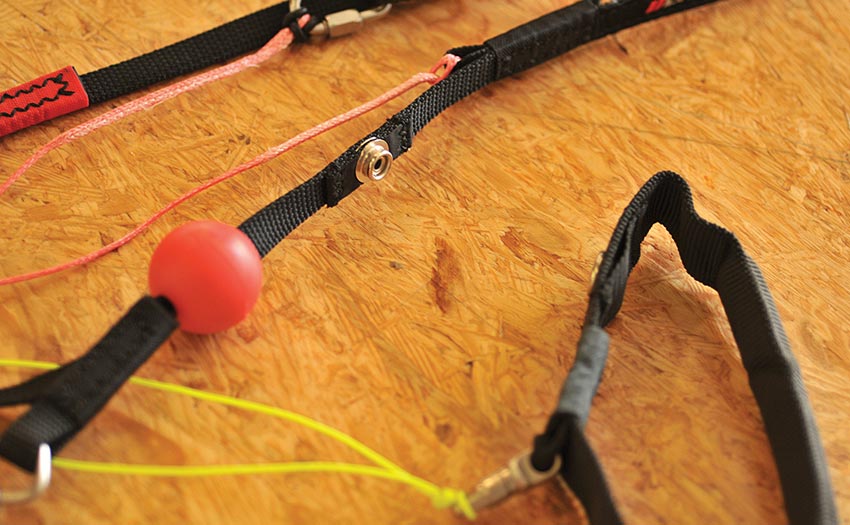 Gliding at full speed alongside an Enzo 3, both wings were neck and neck on glide. We flew a solid 3km at this speed along a ridge in calm lifting air. The Enzo 3 pilot said he still had 3cm of travel left, which positions the Meru as having a top speed pegged below that of the CCC wing, as you’d expect, but with an equivalent glide up to say 5-7 km/h short of the Enzo 3’s top speed.

Gliding later with a Zeno pilot at full speed, the Zeno pilot was if anything fractionally quicker, but he was better loaded on his wing, so I can’t conclusively compare.

In moving air during a task, Seb found he equalled other two-liner pilots in real performance at half to three-quarters bar. He also reported that the stability throughout the speed range allowed him to push harder, when needed.

Rear riser control holds no surprises – the wing responds well to trimming inputs at speed while generating a good amount of feedback. 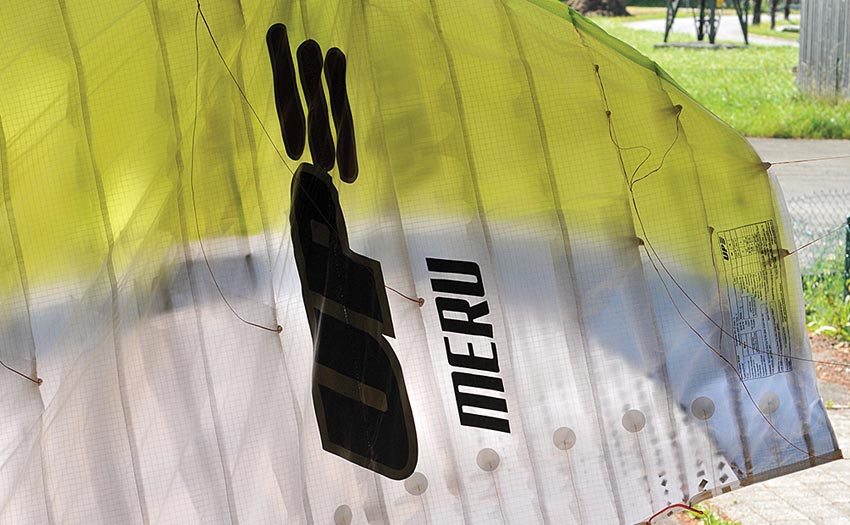 Despite the shortness of our time with the wing, what we can positively say is the Meru is a delight to fly. UP have created a lovely handling wing. It’s not quite as sharp and precise as the Trango XC3, but it is built far more for performance.

It’s easier to handle in thermals, with less ‘catch-the-dive’ characteristics than the Zeno, and seems to glide as well as anything up to 53km/h or so. Ernesto Hinestroza’s third place in the Bawu Open proves the wing can perform at the highest level.

Our experience on the Meru was limited to some XC flying and ridge racing in light conditions. We’ve done a few light spins, spirals, wingovers and so on, although didn’t SIV it. UP say they’re very proud of the wing’s stall behaviour – the glider stalls at the tips first, then the stall progresses towards the centre of the wing – which if correct means it should be an easy wing to get back flying.

The Meru is an interesting new prospect for two-liner pilots. Its pluses are its thermalling behaviour, reassuring feel on bar, and glide at speed. We’re a little surprised UP didn’t want to get properly functioning big-ears – and we’d also encourage you to play around with the lower brake range to get the feel of the stall point because it wouldn’t be good to be caught out – but these aren’t huge issues to the majority of pilots. Fly one and see what you think!