U-TURN ARE based in the Black Forest in Germany, where they have been making paragliders since 2002 under designer Ernst Strobl with “safe fun” as their company motto. They have an extensive glider range, with EN-A and B wings, tandems, and a range of freestyle and acro gliders.

U-Turn’s acro wings have attracted the discipline’s stars right from the beginning, with Pál Takáts, Mike Küng, François Ragolski, Tim Alongi and Eliot Nochez among their extensive list of pilots. The company have recently released the first tandem acro glider, the Twinforce RE4.

The Everest+ is a lightweight hike-and-fly wing, made for mountain adventures and for experienced pilots. The Everest came out three years ago, and was the company’s original ‘Climber’s glider’. It was designed from a clean page specifically as a mountain wing. It had to be light, fast and safe, as it was likely to be flown from big mountains in less-than-ideal conditions.

Designer Ernst Strobl explains: “Our main goal for the project was to combine performance with the safety characteristics of an EN-A as regards asymmetric and symmetric collapses.

“Pilots using the Everest will tend to be walking up the mountain for a long time, and will want to launch and fly even in weather conditions they would not normally launch and fly in. Many pilots will take more risks than they would if there was a cable car going back down the mountain!”

The glider is designed to cope with strong winds and rough take-offs, and to offer top performance for minimal weight. It is aimed at experienced pilots who are comfortable flying EN-C wings.

The wing is available in four sizes: 16, 19, 21 and 23m2. The two larger sizes are certified EN C, but the smaller ones are uncertified. I thought it would be fun, and in the spirit of its design, to test-fly the smallest one. Sadly, my plan to take it into the high mountains was thwarted by the weather, and my test flights were from our local sites in the south of France in early-autumn conditions. 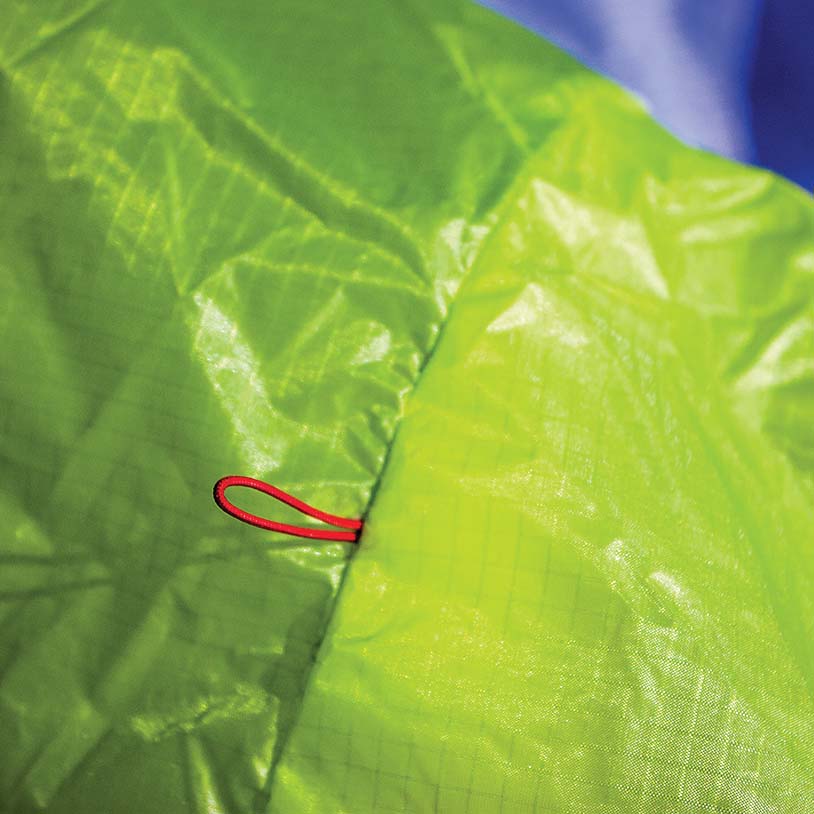 Nice touch … loops for securing the wing in the snow

First look
The Everest+ arrived in a satisfyingly small box, and was delivered in its own well-proportioned stuffsack: easy enough to get the wing back into, but small enough to keep the package compact which slides into a 35-litre daypack or a small hike-and-fly harness.
U-Turn say the Everest+ is made for tough Alpine use, and it’s fine to squash it into a small space.

I did check whether it needs to be concertina-packed, and was relieved when the answer was a resounding ‘no’. “When we were writing down the requirements of the Everest, we realised it was important that the glider can be packed down in the smallest, most compressed way the pilot likes.”

Construction
U-Turn say that durability is a consideration for all of their wings, for which, even on lightweight paragliders, they will sacrifice some grams to ensure their pilots get a wing that will last for years. On the Everest+ all lines apart from the very upper galleries are sheathed, for instance.

The wing is made from lightweight cloth – double-coated Dokdo 10D in the most part, with the most heavily-loaded front section (the green) on the top surface made from slightly heavier 20D. The sail is a 35-cell construction and has short, flexible rods supporting the leading edge. “The wires are very soft and virtually unbreakable – you can wrap them round your finger and they will spring back into shape again,” U-Turn said.

Neither my back nor my scales noticed any compromise in the weight department with the Everest+ 16. It weighs 1.98kg according to U-Turn’s specifications table, which our luggage scales agreed with – reading a smidge over 2kg, including the stuff-sack.

Some finishing touches that are worth pointing out are the two Velcro loops that are sewn into the upper surface at the trailing edge for stowing the risers in when you pack up. Someone pointed out that they could get in the way and potentially catch lines, so it’s worth making sure they are tidily closed to avoid this, but I didn’t have any such issues with them.

The other nice touch is the four small orange loops that are sewn onto the top surface near the leading edge. These can be used to tether the glider to slippery, icy launches if necessary, by means of plastic or metal pins.

Three risers on each side are made from 10mm Dyneema tube webbing – nicely finished lightened versions of full-fat risers, rather than the super-skinny shoelace types, for ease of use. The harness attachment points are different colours (one red, one green). There are three A lines, four Bs and two Cs, and the fact that they are sheathed makes sorting them easier and also less likely to catch on rocks or plants on launch.

The unsheathed upper-gallery lines are short enough to lie on the canopy surface when you lay out on launch. The wing is equipped with a speed system with Brummel hooks, and the brake handles are 10mm webbing, with a plastic sheath that makes them more comfortable to hold, while still allowing wraps to be taken. The brakes run through ceramic rings and attach to the risers with poppers, all nice and simple and functional. 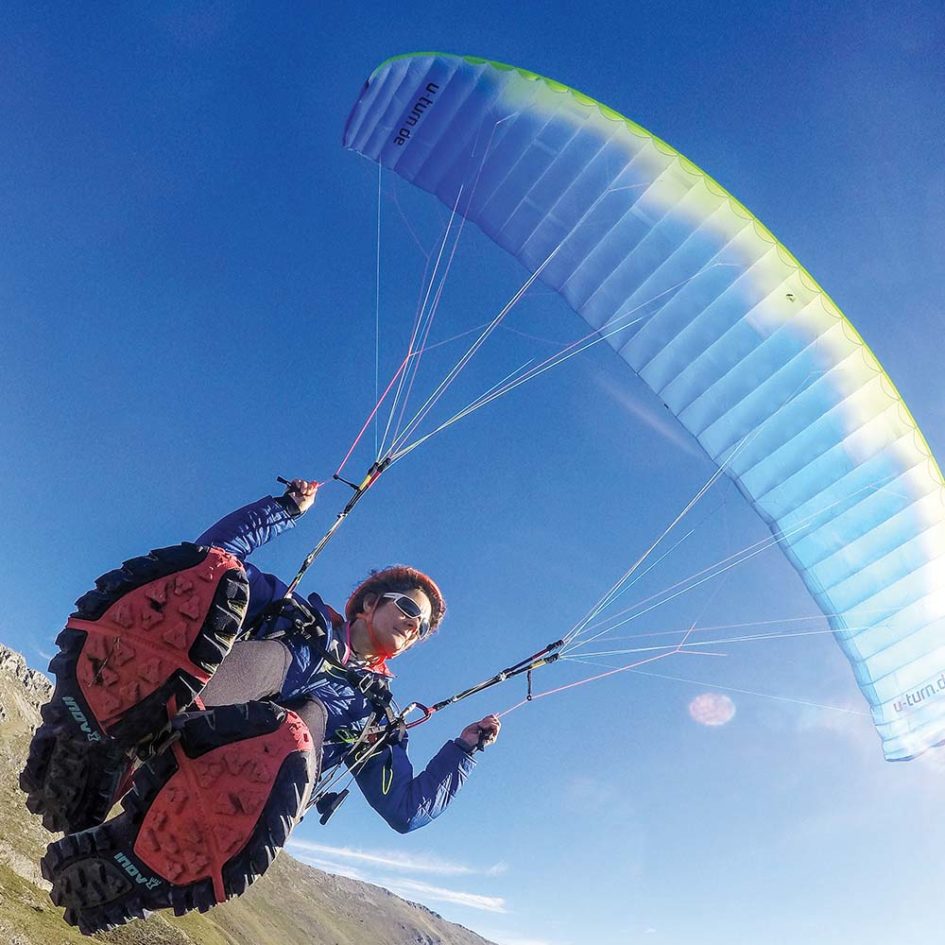 Launching
My first few flights on the Everest+ were from very calm and still early-morning take-offs, forward-launching the wing. The canopy comes up nice and easily – it’s gossamer light and needs only a gentle pull to bring it overhead. A good committed run is needed, especially in light winds, to get off the ground, and a little more space or a steeper slope than a larger wing would need – as you’d expect with such a small glider.

Reverse launching is equally simple. The wing rises nicely into the air with no tendency to overshoot, requiring a calm and gentle pull on the As to get it started. It does need steering on the way up if you don’t pull quite symmetrically or face exactly into the wind. It’s not as simple as the lower category hike-and-fly wings, and will show up any shortcomings in your technique or sloppy preparation!

In the air
The wing looks slim and sleek in the air, and the aspect ratio of 5.5 is high for a hike-and fly wing. Of those we’ve tested recently, Icaro’s Sitta came closest to this with an aspect ratio of 5.1 – it’s a similar style of wing with a similar purpose, but the Sup’Air Eiko and Nova Ibex 3, which are destined for a wider range of pilots and can be flown by those with less experience, were substantially lower at 4.8 and 4.68.

I found the glider to be fun and agile in flight, responding to the slightest touch of the brakes, and giving good feedback about the air. Fast and dynamic, U-Turn warn the Everest+ does need to be steered out of a spiral dive – it doesn’t exit spontaneously.

The wing is very informative about the air it’s flying in, making thermalling easy from that point of view. The sink rate of such a small wing though does not match that of a grown-up one, and I couldn’t stay up as well as the others in the gentle thermals, although in strong thermals for sure it will go up.

Pilots choosing the 16m2 size of a mountain wing have not done so for its climbing prowess, though I daresay a larger size would be a good compromise between climbing ability and speed. Speed is what this wing is good at. It feels very fast, even at trim speed, and the speed bar adds a good few kilometres an hour extra, good to have in the bag if you plan to fly from a windy mountain.

Big Ears are possible, so I gave them a try, although on such a small surface I’m not sure you’d often need to pull them in anger. Without gloves and with the tension in the wing I only managed small ears. Three A-lines on each side mean they are less dramatic than a two-A-liner’s ears would be, and they rolled out by themselves when I released the lines. 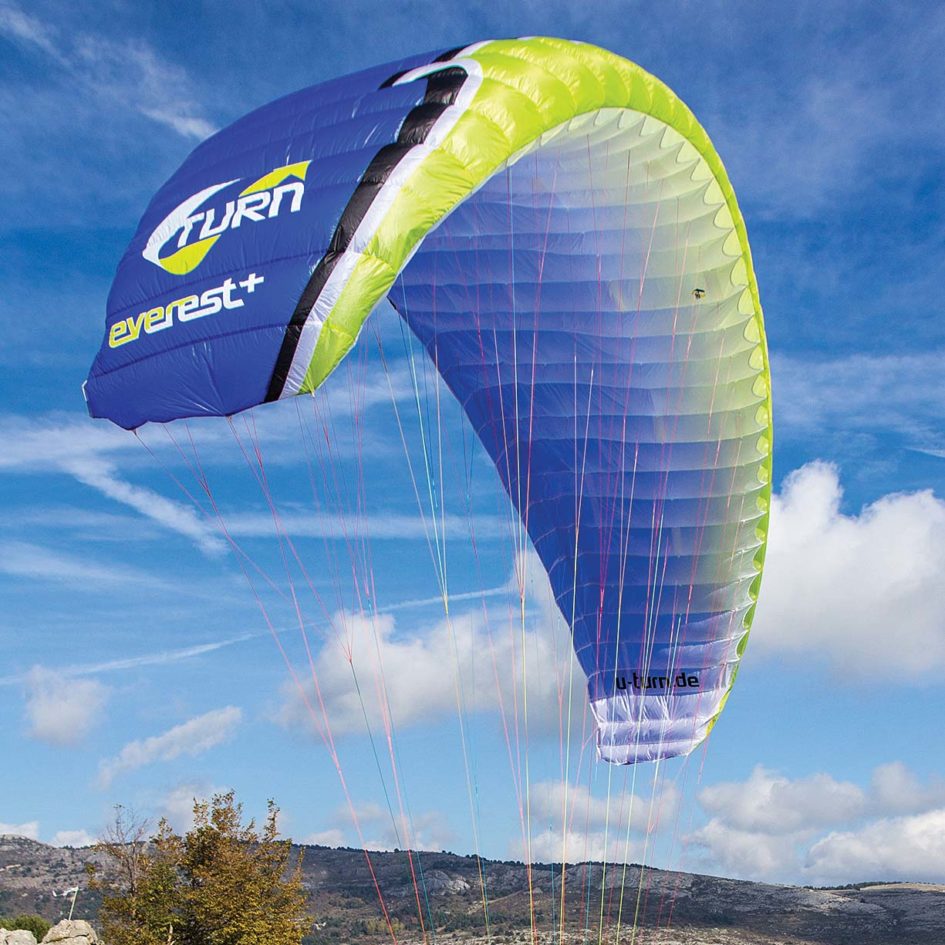 Lightweight cloth – double-coated Dokdo 10D in the most part, with heavier material at the leading edge. Photo: Marcus King

Landing
Landing with some wind is as expected, but in nil-wind I found it a little tricky to get right as I couldn’t get the wing to flare very well. I tried coming in at top speed and giving a good deep brake. With wind this worked a treat, but without, the flare didn’t seem to happen.

I asked U-Turn about this, and they said that, as I suspected, the larger three sizes do flare better than the 16, and pointed out that 16m² is the flat area – the projected area is only 13.4m². Ernst’s advice was to, “Land it like a speed wing. Depending on the wind situation, I brake the glider down in a short time around 50% to 70% brake at around 20-30m height and let it go afterwards, so the glider does a big dive. This dive I use for landing, but you have to brake not too much with the ‘over speed’ of the dive or the glider will get too high again.”

Conclusion
I think the Everest+ 16 is very good at what it was made for – a big-mountain glider, where the low weight and size of the wing will please on the way up, and its speed potential and fun handling will make for a safe and enjoyable flight back down. For a general hike-and-fly glider that is usually used in less extreme conditions, I think a larger size would be a more versatile choice – easier to land and a better sink rate for thermalling. But as with all things, you choose the tool that best suits your purpose.