The Helios RS is Swing’s new EN-C lightweight performance glider. It is aimed at experienced pilots who want an “XC all-rounder” with performance, comfort and low pack volume. Bastienne Wentzel tested one.

Like all Swing paragliders now, the Helios RS features Swing’s Rast system. This system partitions the cells of the glider along the span, allowing varying rates of inflation and re-inflation. This means, for example, remarkably easy launch behaviour and helps mitigate the effect of a collapse. It’s a complex internal structure, which you’d think would surely result in a heavier glider. But this is not the case with the Helios RS, which weighs just 3.9kg in the S size I tested, with a take-off weight of 80-95kg. 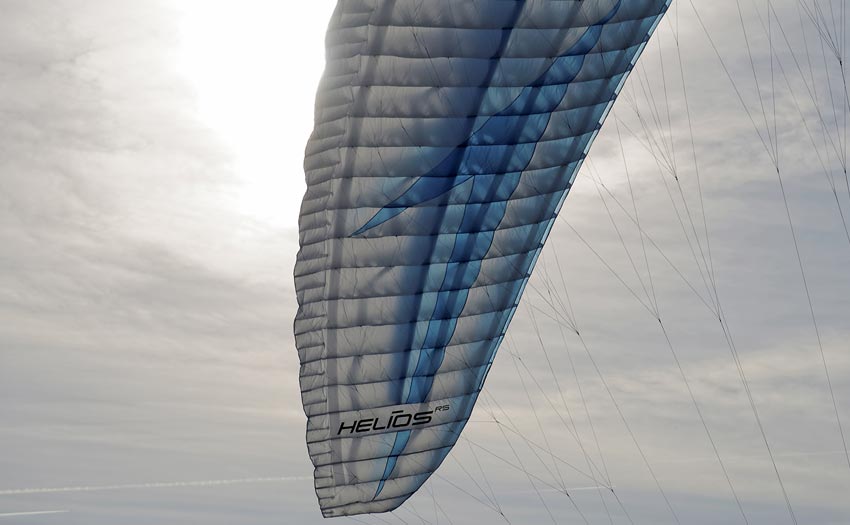 The internal structure of the Helios RS features the darkly coloured Rast partition, mini-ribs on the trailing edge with internal sewing but no C-level reinforcement wires, several spanwise tape reinforcements and diagonal rib-tapes. These all ensure a clean canopy with fewer internal components, resulting in a lightweight glider without compromising on material quality

Out of the box

As expected from Swing, we are looking at a high quality wing with all the modern features. Light materials have been used throughout, to keep the weight down.

The canopy fabric is mostly Skytex 27 and 32, but the top sail and Rast partition are made from Techfiber STA10 and 15 from the Japanese company Toray, which are 27 and 30 g/m2 respectively. This material is stronger and more durable than others, but more expensive, according to Swing designer Michael Nesler. (Icaro Paragliders also use Techfiber, and this was discussed in some detail in XC207, p92.)

There are modest nitinol rods in the nose only – this is the light ‘shape-memory’ metal you can fold without permanently deforming it. There are mini-ribs in the trailing edge without rods, and several spanwise reinforcement tapes and narrow diagonal-rib tapes for a well-formed but light canopy.

The risers are fairly flexible aramid with a black polyester cover. All the karabiners and pulleys are standard; no compromises or lightweight softlinks here. The lines are unsheathed Edelrid 8000/U: it is a hybrid three-liner with a fourth row at the top, for better launch behaviour said Nesler.

The brake handles are a bit bigger than usual and are great for large hands or thick winter gloves. They feature large magnets for the keepers, and part padded and part thin webbing, which is comfortable enough. 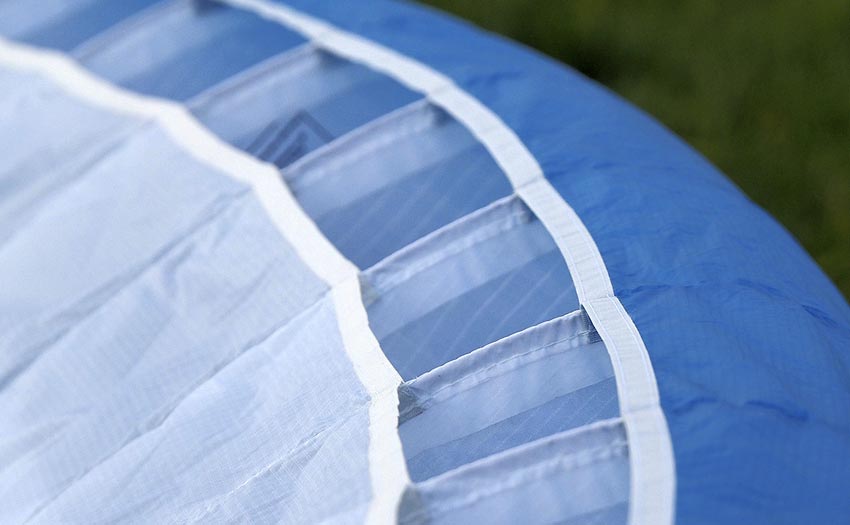 There is no sharknose on the Helios RS. The relatively short nitinol rods ensure a clean leading edge which is easily inflated

One feature that is notable by its absence is a sharknose. Designer Nesler said they tried one on other models such as the Agera RS and Nyos RS, but found no real advantage. In fact, in testing they found that the gliders without a sharknose had the same glide performance, but also actually climbed better. The sharknose prototypes meanwhile did better at speed, “but only above 55km/h”.

Rast meanwhile helps a glider perform better in turbulent air, explained Nesler. “Without Rast the part of the canopy behind the B-lines starts to flex in turbulence. Each deformation costs speed and altitude. You can make this section stiffer with rods everywhere, or by using Rast.”

The wing does not look or feel small though. Nesler said that depending on the aerofoil, smaller surfaces have better penetration, control and climb but are more dynamic, which is again compensated for with Rast. 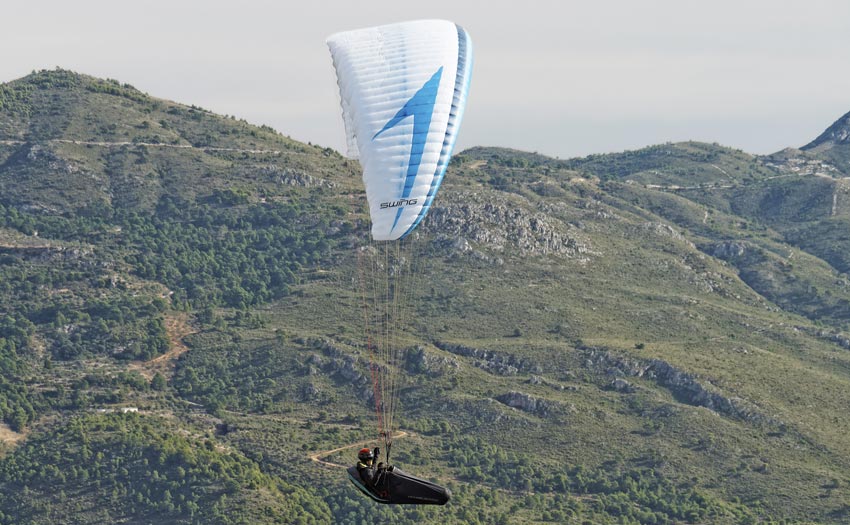 I first groundhandled the glider in 10km/h winds, and it was a real pleasure. There is nothing else to do except tension the inner A-lines and wait. The canopy rises steadily and waits overhead for commands. The glider does not come up too quickly, therefore there is hardly any shooting unless you pull too hard on the As. No strong braking is necessary and there is no sideways motion.

Most of the other launch conditions during our review period were nil-wind or light thermals. The Helios RS is an absolute star in these conditions. Even a reverse launch in zero wind conditions was a breeze. Only two or three easy steps back, no running or frantic pulling needed. This is a big plus for a glider like this, which needs to be dependable in all situations including tricky small mountain launches.

After smiling my way through the light-wind launches, I found myself in very light winter thermals with no real expectation of a long flight. The Helios RS however, had different ideas. It was sniffing around almost on its own and found the lightest of lift, then pulled in and went up. The light canopy is naturally more sensitive to movements of the air and it seems to float nicely and turn flat and efficiently on careful weightshift and brake inputs.

Later on in slightly stronger, larger thermals, the glider responded nicely and directly to brake input. Once settled in a thermal, it is easy to control with the outside brake.

When I eventually had to land, the same easy handling showed itself: it feels as if the Helios RS can fly really slowly and is thus easy to position for a tight spot, even in light winds. Flaring too abruptly will let you feel the Rast partition: the brake pressure rises remarkably and the glider does not stall easily because there is still air trapped in the canopy.

Although the Helios RS does not feel like the fastest glider when flying tip-to-tip with other EN-Cs with a similar (or lower) wing loading, flying on bar is comfortable, with a medium pressure and a usable range up to overlapping pulleys. Swing claim up to +14km/h between trim and top speed.

The glider has a C-bridge for pitch control on bar which connects the inner (rear) C-riser with the B-riser. The pressure on the back risers is high; pushing some bar is necessary to fit your fingers in between the risers. The C-bridge then works as expected. There is hardly any visible crease at all upon pulling the bridge, instead the entire rear of the canopy is tilted backwards upon steering with the bridge. The outer C-riser is recommended for directional control on bar.

The usual descent techniques such as big ears, with/out speed, and spirals are easy. Asymmetric and symmetric collapses are hard to induce on purpose and open very quickly. 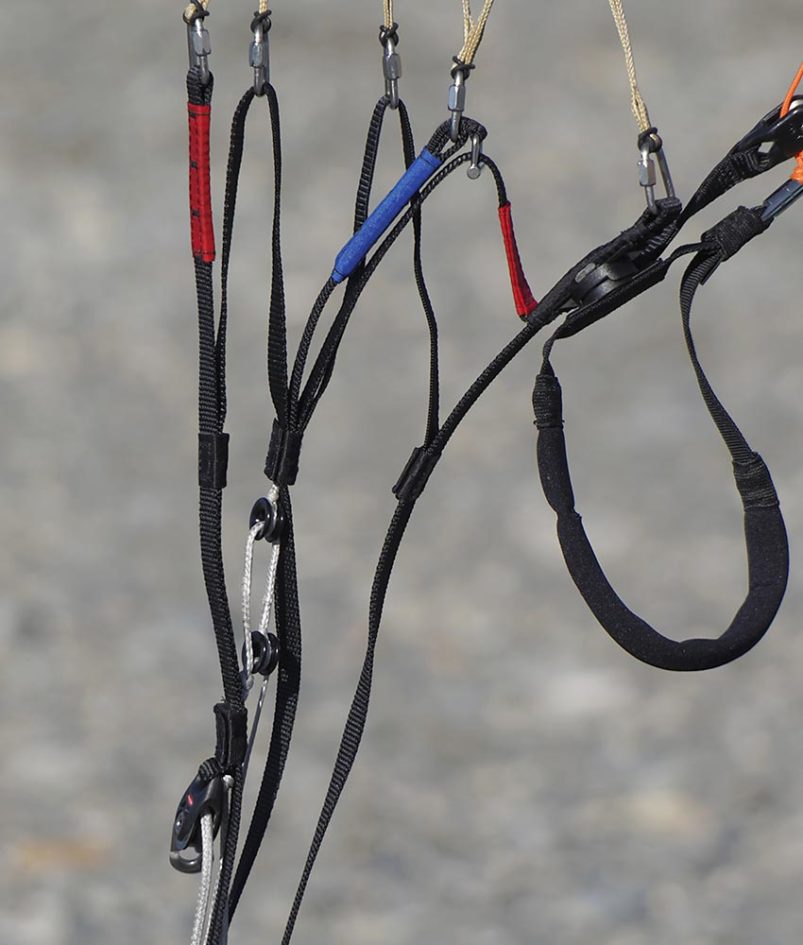 Clean, thin risers with a large brake loop on a magnet

Later in the week a strong wind at altitude set in, which found us flying the thermals on the leeside of the mountains for a couple of days. I found the difference in behaviour of the Helios RS in these conditions quite large. When flying the wavy leeside conditions and small, punchy thermals, the glider needed quite a bit of control, and therefore brain power. In these conditions I would have preferred a bit more weightshift sensitivity. I found myself correcting a lot via the brakes, which felt a bit inefficient and tiring. Not correcting resulted in rolling and the regular loss of pressure in the tips, but no large collapses.

Later, Michael Nesler explained that it is best to let the glider fly and only correct with the brakes when it is really necessary. He said first weightshifting and then adding brake results in efficient turning but a very long brake range, which I can confirm. I flew the glider using a seatboard harness and a hammock-style pod and neither seemed to make a great difference to the conclusions above.

The Helios RS is talkative in these conditions. Whether you appreciate this amount of information from a glider is a personal thing. For pilots used to performance gliders this may be exactly what they are looking for. It is certainly something to consider if you are looking to step up to the Helios RS from an EN-B glider. 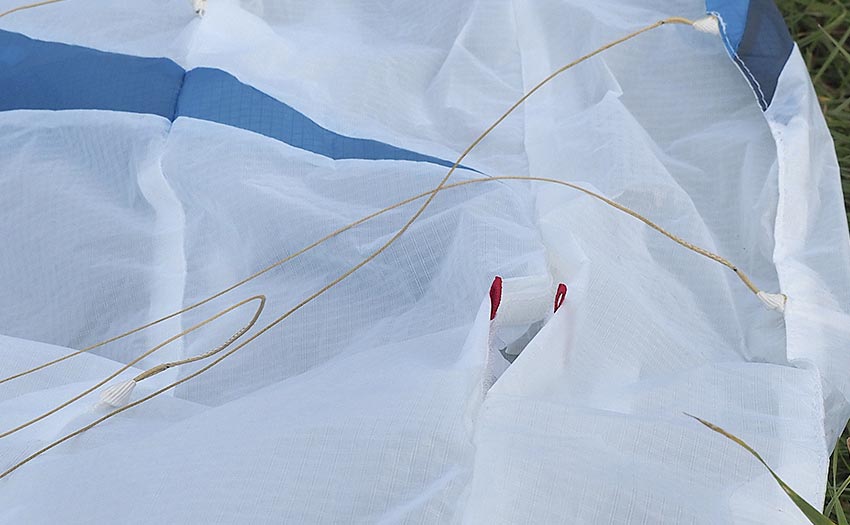 Nice feature: these dirt outlets are not on the very tips where the velcro causes sticky cravats, but one cell to the inside. The velcro is opened with the two coloured tabs, red on the left, green on the right wingtip

The Helios RS then is a beautiful glider, with quality build and still as light and compact as any of the lightweight performance gliders around. With an aspect ratio of 6.1, it definitely has the handling and feeling of an EN-C, but it feels comfortable with fairly long brake travel and not too demanding handling for its class.

The amount of feedback in rougher conditions is relatively high. I would place the performance and speed of the Helios RS right where it is in its class: higher than a high EN-B, but not quite as high as the top of the EN-C class. As you would expect of a glider in the EN-C class it does need some piloting skills in the stronger stuff.

For me, where this glider really stands out is in its potential for hike-and-fly and adventure flying capabilities. It is light and compact, but still durable and usable. It is incredibly easy to launch and land in tight spots. And it is very good at sniffing out lift in light conditions. Just the thing to get you flying far on your next adventure.