Swing have been promoting their RAST system for the last two years starting with speed wings and their acro wing. Last year, after a bit of an update, the system arrived in their mainstream wings with the Arcus RS, a low EN-B. Towards the end of the year the company released the Arcus RS Lite, shaving 800g off the weight. I got to fly the new wing last autumn in the French Alps and Nepal.

So of course everyone wants to know, does RAST work? Does it make a difference? Probably the most obvious sign of its influence on the wing is the launch behaviour. Because of the valves inside the wing the front half inflates first. The wing then starts to rise steadily overhead – and then the trailing edge starts to inflate.

This means the wing is very easy to launch and there is no tendency to overshoot whatsoever.  In all the conditions I flew in, from nil-wind to strong thermal gusts, I found the same predictable behaviour. The lack of overshooting means less need to use the brakes and less risk of converting energy into lift and being dragged.

It does sometimes feel as though the wing sits back a bit before your weight comes onto it. I put the delay down to the rear filling, and it was only really noticeable on a very tight launch in Nepal where I would have preferred the wing to take my weight a bit more quickly. For its intended audience the launch behaviour is very well tuned. 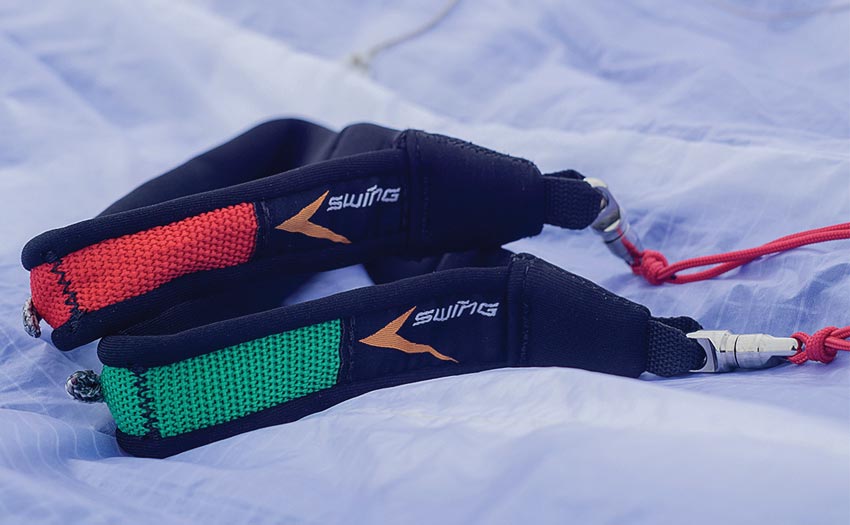 The demo wing had standard webbing risers, although for the weight-obsessed optional Dyneema risers can lose a further 300g. With three risers and split-As the supplied risers are clean and well finished with nice colour coding including red and green colours to differentiate between right and left on both the riser and brake handles.

The handles themselves are fairly chunky for a lightweight wing but as many people use these wings for everyday use that’s not a bad thing. I found the handles comfortable and you can remove the inner stiffeners to adjust to your preference. 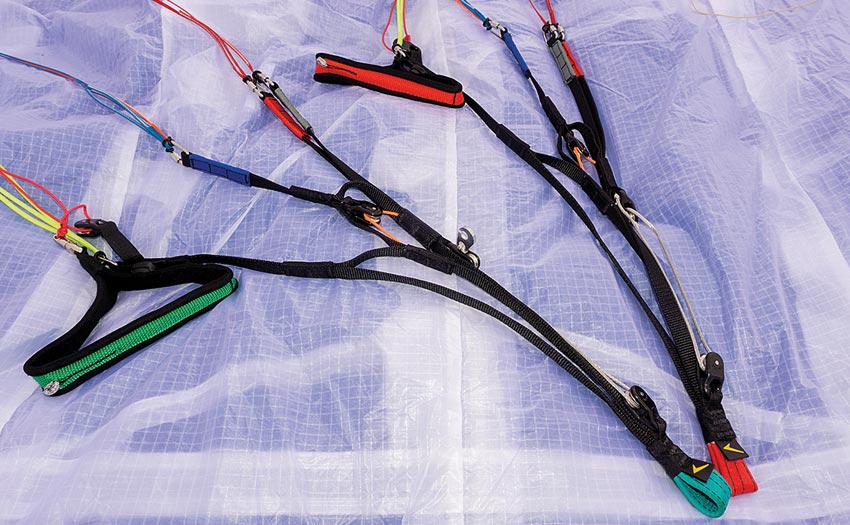 My first flights were in the south of France during stable autumnal conditions. In the air the wing is well damped and has a solid, compact feel to it. For a lightweight wing there is remarkably little flexing. Swing say this is thanks to RAST, but without flying the same model with and without the technology it’s hard to tell. With my Impress 3 pod harness the feedback was good enough to feel out the best lift, but subtle.

In turns brake pressure felt higher than the BGD Echo I last flew and my normal Mentor 4 Light. It feels a bit like the RAST is stopping air moving forward when you brake, increasing the pressure.

The response is nice and linear, allowing you to place the wing precisely. The wing favours efficient flat turns, although giving it a dose of weightshift will get it to roll. For newcomers and weekend pilots this behaviour is perfect and leads to efficient climbing in thermals. 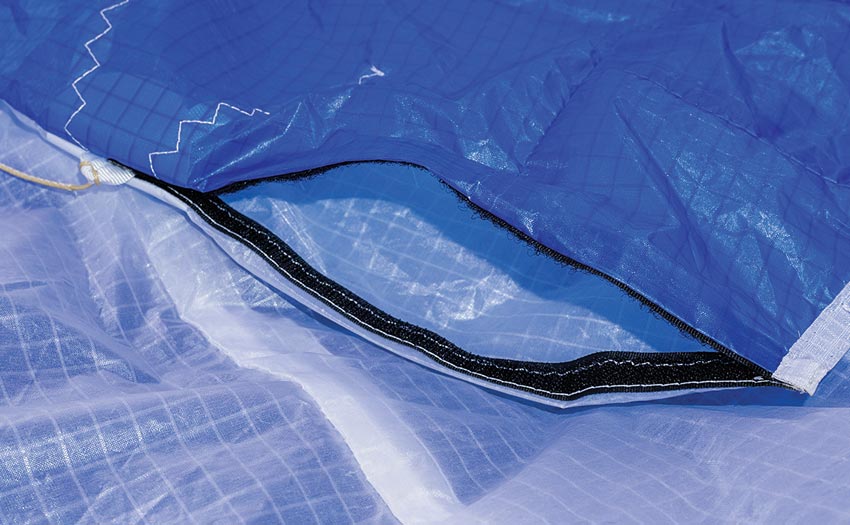 Velcro on the wingtips to allow cleaning

The wing’s efficiency really shines in weak conditions. In the stable conditions we had I was able to work my way up the mountain to the better air above. Once high I was able to explore the wing’s cross-country performance: I set myself a small triangle as a bit of a challenge for both the wing and myself.

Once above the main ridge the first leg was an easy ridge run. Pushing on the bar I found it smooth and easy to use. At full acceleration the wing’s nose still felt nicely solid, there is no sign that Swing have pushed the limits.

I was able to happily run the ridge controlling the wing with weightshift and bar. We have a low airspace ceiling so sometimes it is useful to manage altitude with big ears and bar. I found the Arcus’s ears were stable with no thrashing about. When released they re-inflated spontaneously. 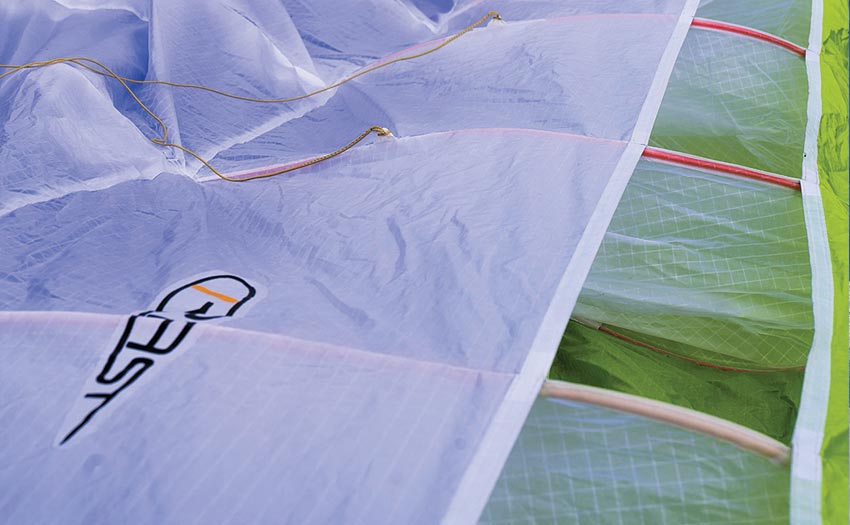 I had set the final turnpoint of my triangle into-wind up the valley in front of the main ridge. This meant pushing through the lift and turbulence coming from the cliffs. The wing felt nicely pitch neutral, and did not get pushed back. Sure, it wasn’t as driven as some higher-class wings with prominent sharknoses, but it needed very little attention.

Coming back from the turnpoint I got quite low and had to work the broken lift in a crosswind amongst the rocks. This led to some pretty funky air, as you would expect, but the wing coped well with it and had a reassuring solid feel. 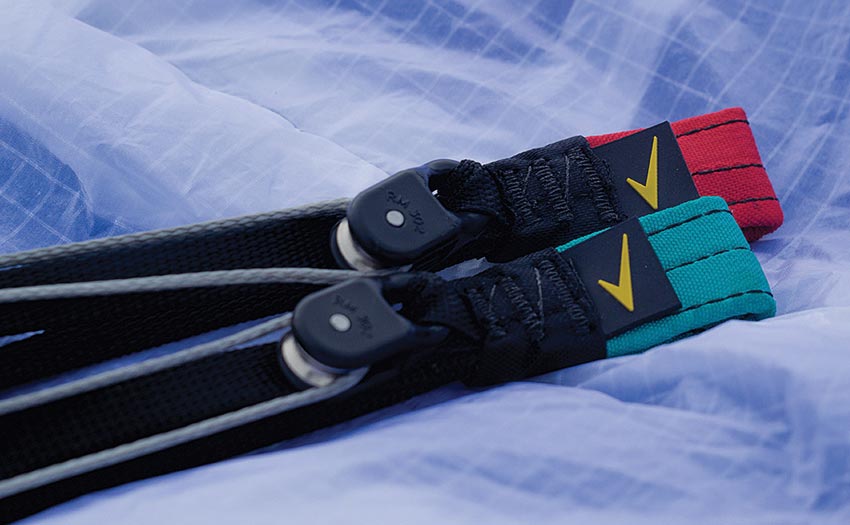 I also took the wing with me to Nepal, its low weight making it ideal as a travel partner. I switched to a very lightweight hammock-style harness and at first found I really struggled to feel the air well. A reminder that it is always best to check out how different elements of kit affect each other before you arrive.

I did though manage to do a few cross-country flights during my stay, including a couple of 40km wanders around the valley system proving the Arcus’s XC credentials. When climbing up one of the bigger peaks I found the air was being influenced by the meteo wind and we were in the lee. Again, the wing proved to be nicely solid allowing me to concentrate on working the tight cores to find an escape route out of there. 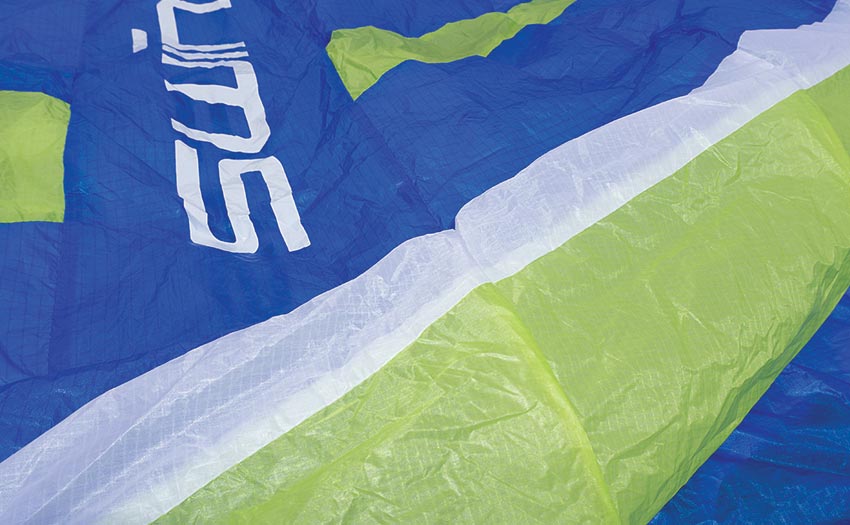 3D shaping on the top surface

Swing make a big point about how the RAST system affects the collapse characteristics. However, during my time with the wing I didn’t get the chance to pull any big collapses to put this to the test. I think I only got one small tip collapse and that banged straight back out. Most pilots probably won’t get to experience how RAST affects collapses as it is doing a good job at stopping them happening in the first place.

With its good comfort level and ease of use the Arcus RS Lite makes a perfect first XC wing, or even a first wing for talented beginners. Plenty of performance means it won’t hold back the developing pilot. It also makes a great vol-biv / travel glider for more experienced pilots looking for good safety without trading too much performance.

Honestly quite how much RAST contributes to the overall behaviour is something only the Swing test pilots can know. What’s important is that the final package is a well-rounded wing combining great comfort with good performance.

Marcus King regularly reviews EN-B and EN-C wings for Cross Country. Cross Country’s designer, he has been flying paragliders for 25 years. He lives in the south of France where his home sites include Gréolières and Gourdon.