Hard week at the office? Relax! says Felix Wölk who flies this new mid-B from Swing.

Older pilots will have fond memories of the original Swing Arcus. Back in 2002 the first Arcus was the start of a series that was hugely popular, especially in Germany. It gave Swing some record-breaking sales and several golden years.

The secret of its success was its usability for a wide range of pilots, and for that it was in tune with the times. Now, once again, Swing are back with the Arcus 2 RS, a mid-B paraglider aimed at the broadest range of pilots in the Alpine countries: leisure and occasional pilots who look for a good balance between performance and passive safety.

In order to find that balance chief designer Michael Nesler, known for his bubbling designer spirit, has implemented a multitude of ideas in the Arcus 2 RS. Swing’s RAST system is the most obvious one: an internal structure that regulates the air pressure distribution in the profile and minimises any aggressive post-collapse behaviour. 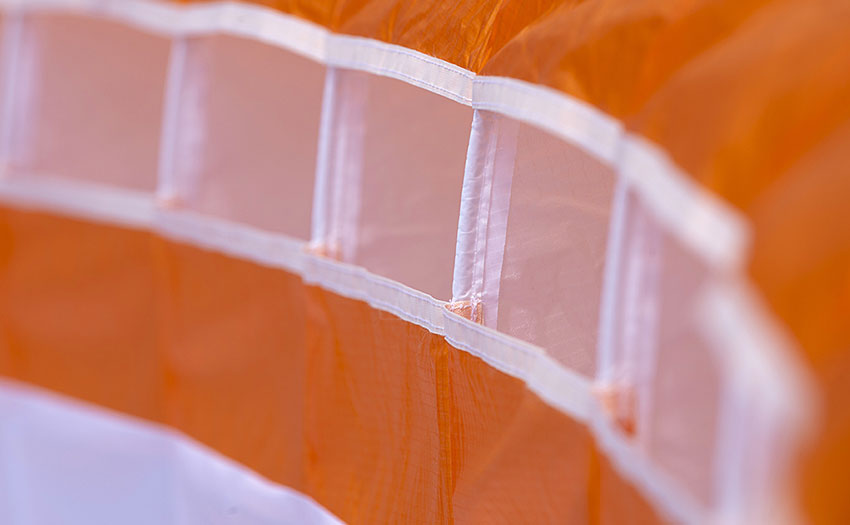 The leading edge with Nitinol wires

The glider is basically based on the design of Swing’s high-B Nyos RS, moulded to fit the target audience of mid-B pilots. The result is a 57-cell profile with an aspect ratio of 5.4. That’s quite a high cell count for a glider in this class, but fairly typical A/R.

The glider features all the aerodynamic refinements you might expect on a modern wing: mini-ribs for a clean trailing edge; 3D shaping for optimised sail tension; Nitinol rods for profile stability with minimum weight. These Nitinol rods are covered in nylon protective sleeves by the way, which Swing say is for better durability and a longer glider life. 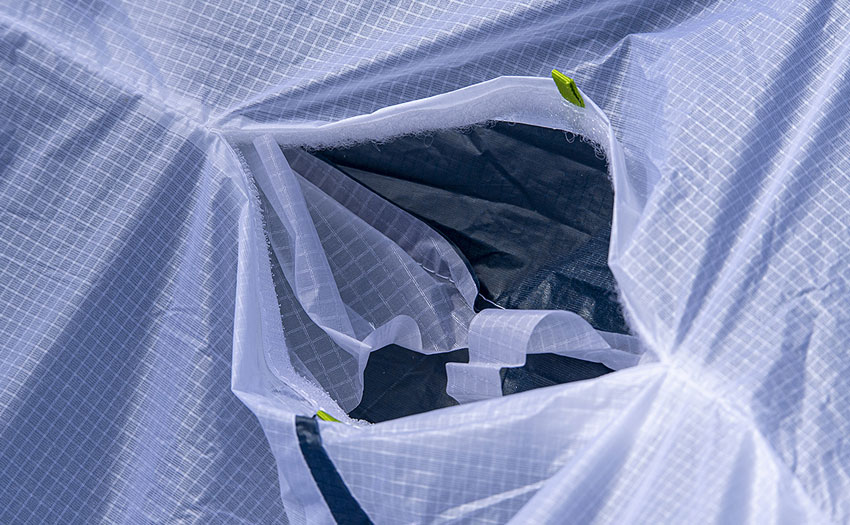 Velcro openings for clearing any dirt

The RAST system was developed by Swing and is one of the brand’s greatest innovations. Not only for minimising post-collapse bad behaviour, the system is all about equalising the pressure within the glider throughout the flight, from launch to landing. The result, Swing say, is that the lumps and bumps of demanding conditions are smoothed out, and that the glider retains high stability even at maximum speed.

The glider is a three-liner, with the C-lines branching into a fourth line in the upper gallery. The main lines are sheathed while the gallery lines are not. The material used in the wing is a mix of Porcher Skytex 38 on the top surface and 31g material from Techfiber on the bottom surface. 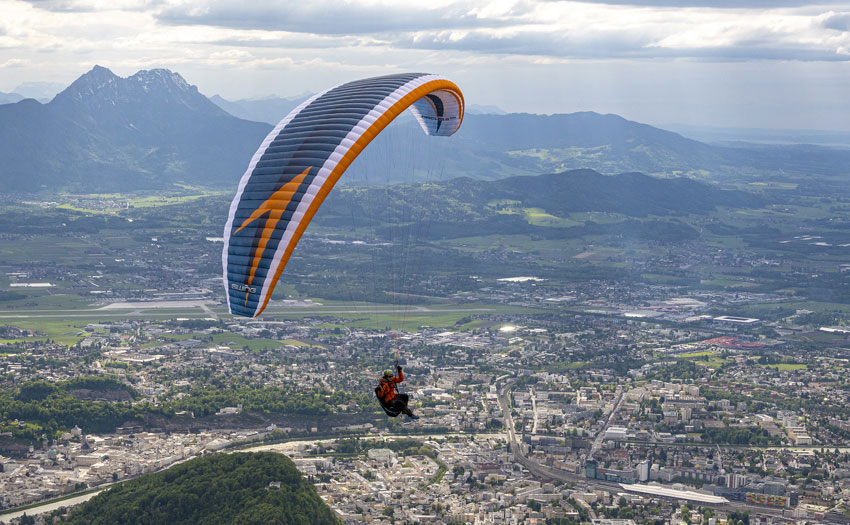 Taking the glider out of its bag you are immediately pleasantly surprised by its uncomplicated pre-flight handling. The line levels are clearly colour-coded and immediately give a clear overview. Any tangles sort themselves out when pulled, and even the unsheathed lines show little tendency to form loops and knots.

The rather stiff risers are child’s play to arrange. Large brake handles are attached to them by means of a magnet, which has a clever clip to prevent the brake from being released unintentionally. The simplicity in launch preparation culminates in colour-coded attachment points to distinguish right and left risers.

With a bit of wind a well-behaved and uncomplicated wing reveals itself and during groundhandling a certain character becomes immediately apparent. The profile seems very compact and always tightly filled in the middle. There is neither an annoying life of its own at the wingtips, nor a tendency to U-shaped deformation. A certain agility around the vertical axis is noticeable, which occasionally requires corrections during the inflation phase.

In stronger wind the canopy rises above the head without the aid of the risers. This is an indication of balanced launch behaviour and will make it easier for a less experienced pilot to get used to the glider. 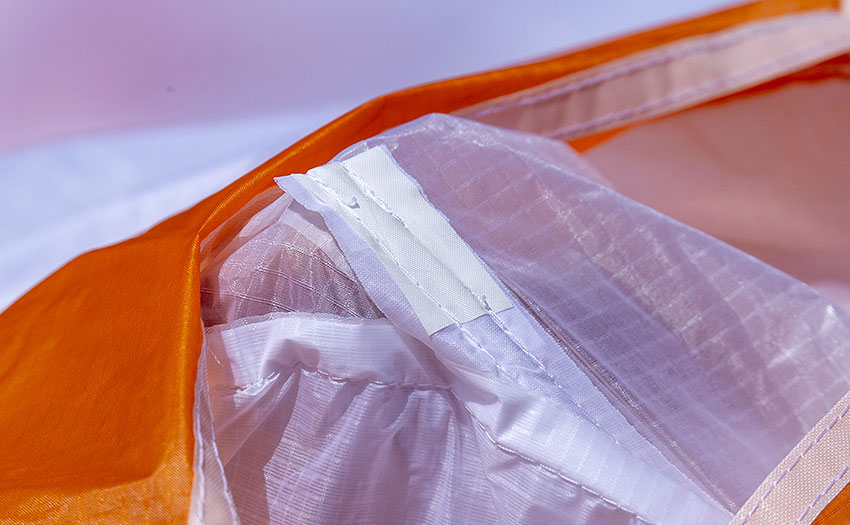 When the canopy reaches its zenith it loses speed on its own, which makes unintentional overshooting unlikely. After the glider has risen, it is somewhat surprising that even massive brake application causes comparatively little increase in lift. The risk of being “levered out” backwards as a beginner is therefore much reduced.

Handling in light winds is interesting: the canopy can travel quite far in front of the pilot before it folds underneath itself. If you hold it at the zenith meanwhile, a slight yawing tendency appears, the cause of which seems somewhat mysterious. Is this the RAST system already speaking quietly here from the inner workings?

Since the Arcus 2 RS is not designed as a lightweight machine, a nil-wind forward launch needs a bit of energy due to the higher canopy weight, although it is uncomplicated. Overall, the launch behaviour in all wind strengths can be described as easy and forgiving. 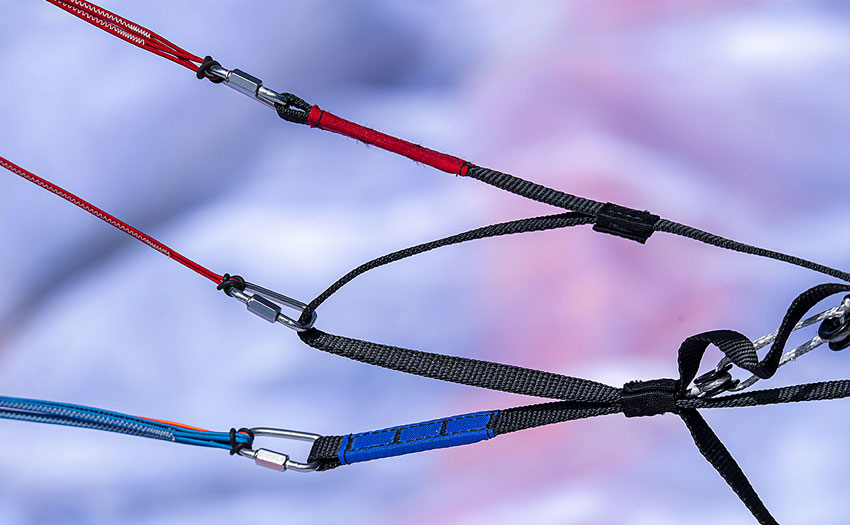 In flight, the glider immediately gives you a great feeling of safety. The profile is not susceptible to unwanted pitch or roll. It is very damped and seems to absorb any nervous chatter in the air. It’s a bit like the wing is tracking on invisible rails; it feels as if the front two-thirds of the wing are aerodynamically decisive, almost somewhat decoupled from the rear part of the sail including the brake fan.

Now, you might think that a paraglider with this kind of calmness is not going to be any use for thermalling. This is definitely not the case. Although the Arcus 2 RS enters thermals unspectacularly, once in them it proves to be an absolutely functional tool, effectively circling in any radius you want, from tight to wide. Inside brake-pressure increases progressively, while the outside brake precisely regulates the bank angle.

There is no pitching, oscillating or wobbling about. The glider chooses its line and seems to settle into the right radius for itself, demanding little more from the pilot than to monitor the climb values on the vario.

In flat, wide, slow turns the Arcus 2 RS also climbs well. In killer climbs, as you catapult skywards you can just let it happen, as if sitting in an armchair watching TV. This is the type of fun than not all gliders will allow without being unceremoniously spat out at the end. Here, the glider takes care of you. 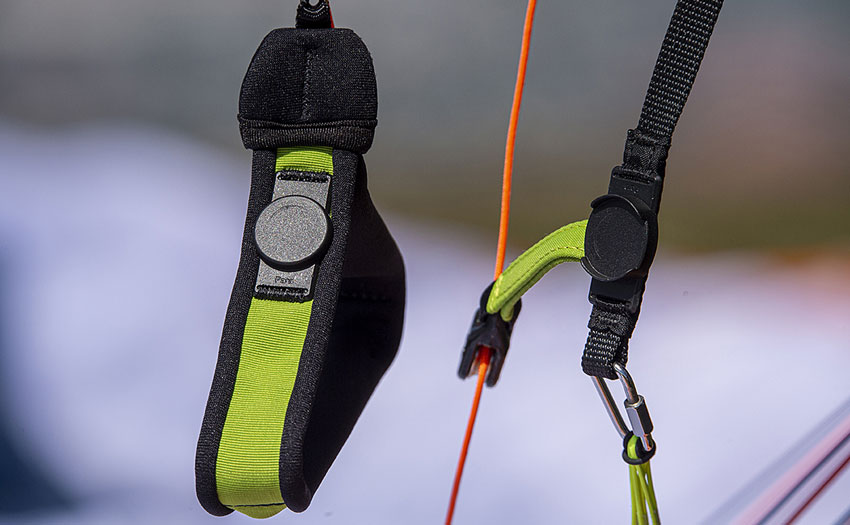 I did discover one little trick that helps get the most out of the climb. If you only pull one-sided brake as you enter a thermal the glider will dive briefly, which is harmless but costs altitude. I put this down to the turn axis and the above-average line-length, which results in a stronger pendulum effect. To counter this, as you start to turn, immediately apply a dab of outer brake. This dampens the dive and allows the glider to then thermal on track.

This tame diving tendency of the wing also has advantages in thermals. With unruly, tight thermals the profile bites nicely into the core. It also makes it easy to “pull back” as the thermal strength increases.

Due to the high damping as well as the simplicity in thermal flight, you could almost believe you were a passenger of an externally controlled wing. In addition, any turbulence is not very noticeable through the brakes; turbulence is swallowed up by the profile and arrives at the pilot in a much-diffused state. Lots of newer pilots will benefit from this, as interpreting the movement of the air can take up a lot of mental bandwidth.

This seems to be true regardless of harness. Whether reversible, pod or acro harness the differences all felt small. The glider works with all harness types, as it’s primarily controlled via the brakes.

The passive safety is extremely high. The wing seems to be enormously stable. It takes very toxic air to shake it out of its composure. Most of the time it responds with a harmless rolling in of the outer wingtip.

If it does get a collapse then it opens quickly and independently. According to Swing this is the RAST in action, the air pressure inside the wing equalising and “pushing” air to the front. Even with big 60% collapses, the glider does not turn much, which is strange considering the tendency described above of the profile to dive.

Another safety plus is very high brake pressure towards the stall point. As a result I would say accidental overbraking-with-subsequent-stall is virtually impossible.

The speed system seems effective, even though it requires some power. The profile also behaves when on glide. When entering a climb the glider does not pitch back excessively nor does it actively bite into it. It simply climbs. Directional correction with the rear risers works well, although the pressure point is somewhat undefined.

The Arcus 2 RS lacks a bit of bite to let off too much steam playing with wingovers in a laminar upwind slope, although it is quite suitable for beginners. The glider will be kind as you learn to allow the wing to dive, give it time to recover momentum afterwards and then circle as high as possible over the canopy with both brakes – actually an acro glider technique that can be used here.

At this point the glider then shows the limit of the wingover height with its unloaded sail: a prominent kink forms across a large part of the span, at the level of the first third of the wing’s chord, which is where the RAST system has its heart.

Getting down, a steep spiral is easy to regulate. If there is no pilot input then the wing comes out of the spiral independently, which is an important safety consideration.

Big ears are easy to pull in, and also come out independently although with a slight hesitancy. A pump clears them easily.

The slightly forgotten manoeuvre of the B-stall works well with the Arcus 2 RS. The pull is probably possible for all pilots, and the stall is not very aggressive. Throughout the manoeuvre the profile remains stable and symmetrical. When released, it is followed without delay by a non-aggressive pitch to then pick up speed. 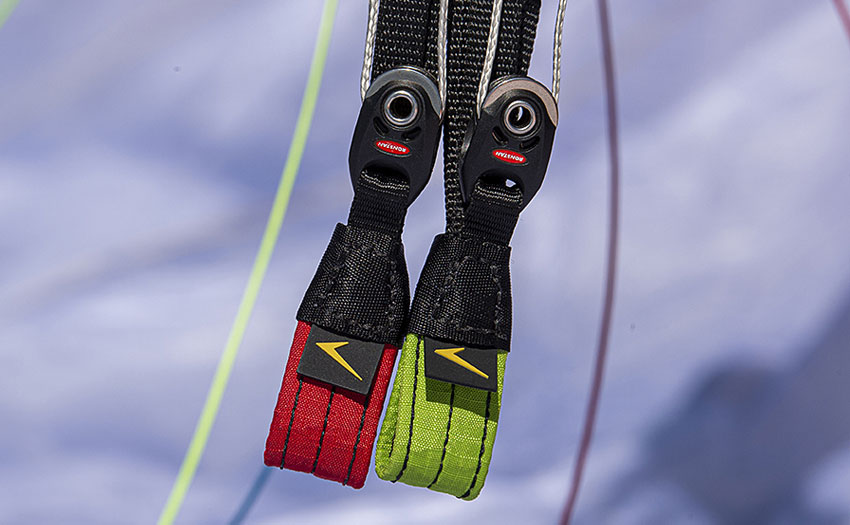 The Arcus 2 RS represents a remarkable design achievement. It is a paraglider that seems to take its pilot on a journey, although its high level of passive safety and smoothness will perhaps be a little too pampering for some. Its uncomplicated control technique makes it an all-rounder for recreational and occasional pilots who want to enjoy our sport in a relaxed manner.

With the Arcus 2 RS, a newer pilot may consider venturing into conditions he or she might otherwise avoid. If we exclude strong winds for a moment, the Arcus 2 RS would certainly be the tool for the job.

This is a confidence-inspiring glider and will allow its target pilot – mid-B pilots, maybe on their second wing – to fully engage in learning how to fly the sky. Pilots who have a lot of flying hours may want more direct feedback; that is a matter of taste.

One thing is certain: anyone who has only one wish after a strenuous week at the office on Sunday, namely to relax at cloudbase, will have a good chance of seeing their wish come true with this wing.