The Supair Birdy is designed as a first glider for pilots who are learning to thermal and want to go XC. Photos: Marcus and Charlie King
EN-A, Reviews

It’s an EN A+ designed for “new pilots with feel” – and it leaves Marcus King genuinely surprised.

It is unusual for us to get to test a wing before it comes to the market. Thanks to Covid the release of the new Birdy from Supair was delayed. With the wing already having passed its certification flight tests nearly a year ago, we were able to get hold of a full production model before it was released to market and have been flying it in the south of France.

The Birdy is a brand new wing for Supair, fitting between their Eona 3 school wing and the low-B Leaf 2. It is billed as being efficient, light, durable and benefitting from a very high passive safety.

Sales manager Clément Latour explained that it is not designed to be used by schools for complete beginners, rather it is “a good first wing for pilots with feel.” He added: “Because the Birdy belongs in the EN-A category but has the fun and feeling of a B we think it will be used for advanced and thermalling courses. We had a lot of requests for this type of wing, especially from Switzerland where pilots generally fly with their instructors for the first 60 flights or more and progress further before being left on their own. The Birdy will definitely bring them more than a classic A.” 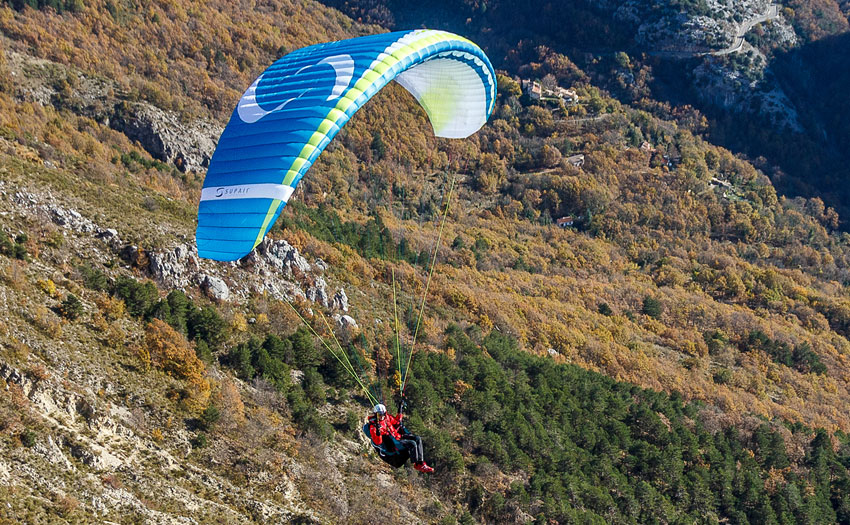 The wing has an aspect ratio of 4.95, which means it is agile in thermals, able to tighten up in cores and climb out.

The wing is a semi-light design. “We designed the Birdy to be a Swiss Army Knife – light and compact but also durable,” explained designer Pierre-Yves Alloix. “To achieve this we mixed the materials, using 27g material from Porcher on non-critical areas to save weight and heavier Dominico D20 and D30 on the top surface for durability.”

The medium size we had for review is quoted as being 4.2kg for a 26.5m2 wing. The Nova Aonic, also marketed as an A+ wing, weighs 4.75kg for the similar-sized S, although the top weight is 5kg less. What is noticeable, especially coming from more complex wings, is the compact packing, especially using the compression concertina pack supplied.

Pierre-Yves explained, “The aspect ratio is pushed to the acceptable limit for beginners. Of course, it is possible to certify an A wing with an aspect higher than 5 but then that aspect needs to be managed by the pilot. We wanted to find a good balance between real A safety and optimised performance to create a wing for pilots to progress quickly in safety.” 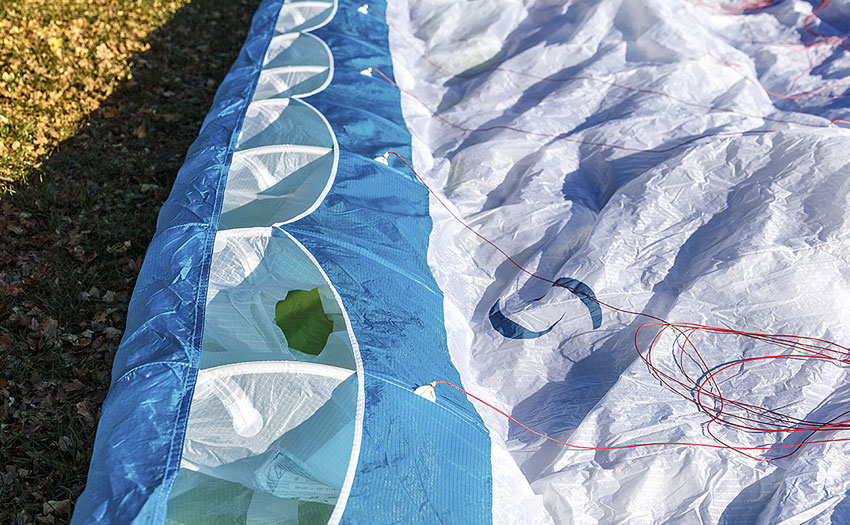 The leadinge edge has a mild sharknose

Up front the wing design uses twin rods on most of the cells to create a modest sharknose profile. The top rods and those used in the three outer cells, where there is just a single rod, are made from nylon, but the bottom rods are nitinol. “These larger rods on the big openings can get bent over time so they lose their shape during inflation,” explained Pierre-Yves. “The nitinol keeps the opening of the leading edge in good shape, it is something we already used on the Sora 2.” There is also 3D shaping with seams running across the span incorporated into the colour scheme. On the trailing edge are the smart mini-ribs that have no external seams.

The line layout is a standard three-line set-up with D-attachment points and three main lines on each side. The outer-As are on a separate riser to make big ears easy. All the lines are sheathed and easy to sort with obvious colour coding.

Unusually for this level of wing the lines are attached to the risers with softlinks; although stronger than maillons some might find them unnerving. They are covered by neoprene sleeves and look very neat. The risers are made from thin webbing but are easy to handle and have colour coding.

The well-padded brake handles are held in place with magnets that only release in one direction so they don’t get accidentally pulled off. The brake lines are attached with a swivel and run through ceramic rings rather than pulleys. Talking of pulleys, it’s good to see the speed system uses good quality Ronstan ones. 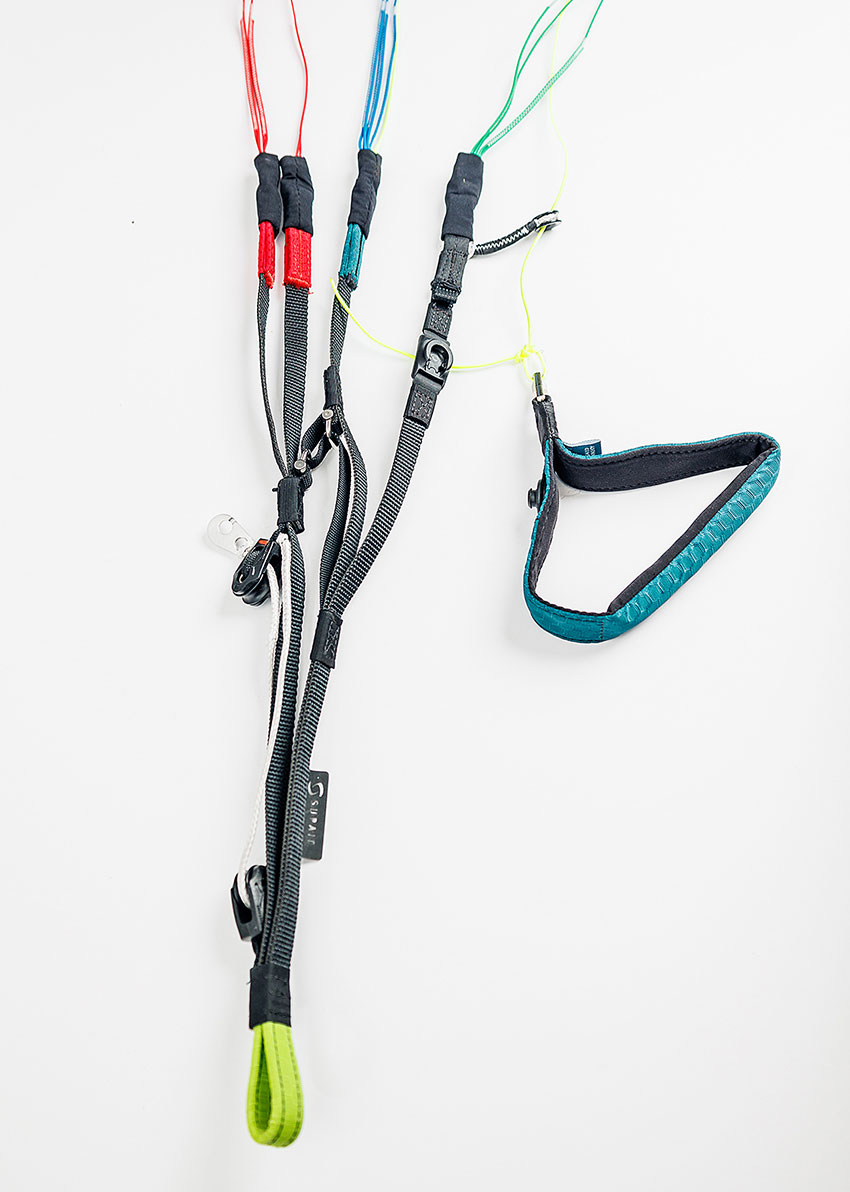 Rolling out the wing its compact nature makes it easy to sort ready for launch. The lines being all sheathed don’t easily tangle, usually just falling out as you unpack the wing.

Although the glider is light it is not so light that it wants to jump in the air when there is any breeze. You can sort the wing without having to constantly hold it down. This makes everything less stressful for the new pilot.

Once you are ready to go this must be one of the easiest wings I’ve ever launched. The lack of weight helps it come up smoothly and the low aspect ratio makes it easy to correct direction on the rise. I could be very lazy with it and the wing would always come up perfectly with no overshoot. Just what you need early in your flying career.

Thanks to the lightweight package when paired with the Altirando Lite Supair harness I was sent I was happy to take the wing on hike-and-fly trips. On a couple of these launches I was greeted with no wind and a relatively short runway. Here the wing behaved excellently, coming up easily and smoothly as I walked forward before accelerating into flight. 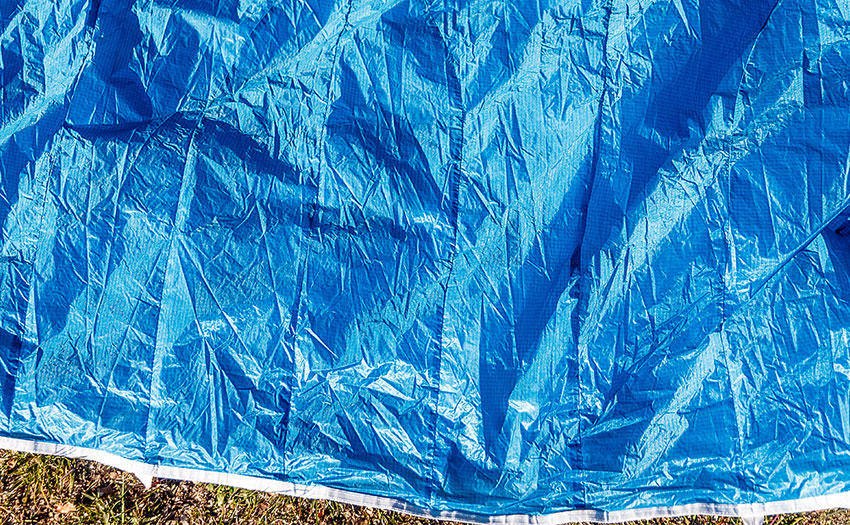 My time with this wing didn’t bring the best of weather with a mix of stable late autumn days and others where we were flying in a protected bubble with lots of wind, but I got to take it thermalling and on the local ridge run.

In the air the ease of use is very evident. The low aspect-ratio gives a very compact feel to the wing that needs very little management. This wing flies on rails. It’s also remarkably pitch stable. Coming from a larger aspect high EN-B wing it did feel like it had more roll, but I quickly got used to it and it is not at all excessive for this class of wing.

This is marketed as a wing on which students can progress into thermalling and cross-country flying. I have to say it’s a joy to thermal. It sits at a bank angle in a climb very easily without feeling like it will be pushed out and without constant control. I had wondered if it would feel a bit boring but actually it’s great fun. It has a flickability that allows you to make the most of small areas of lift, direction changes are quick so you can S-turn near the terrain in comfort.

Despite the agility the brake travel is nice and long, Supair specify 72cm for the M I was flying. I tried holding the brake down on one side to hip level and the wing showed no signs of going negative. If you do push the turns it can dive a bit but it converts the energy into lift well.

I was also impressed with the feel for the air the Birdy gives. I am sure the material mix really helps here. You get base information through the harness pressure but then there is a nice level of information coming through the brakes too. All this is smooth and comfortable and gives you the information you need to work the climbs. 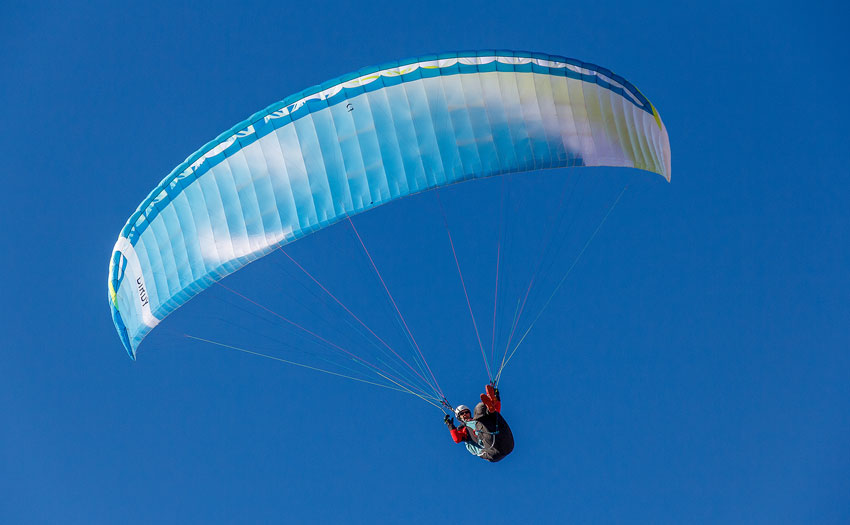 It’s a perfect wing to learn to thermal on, with enough feel so you can understand what the air is doing, but enough pitch stability and general solidness that it will look after you when you fall out into sink

It all makes for a wing that is efficient in climbs and I was able to climb out on a couple of days when most pilots were stuck in the stable air low down. And doesn’t that make you feel good! It is certainly a wing that you can learn how to thermal on well. You will get to know how the various parts of a thermal feel and what the air is telling you. And, if you do miss the edge and fall out its pitch stability and general solidness means it’s no big deal: just turn and find it again and learn. I flew on days where we were in leeside conditions and not once did I have any tucks at all.

Where compromises are more obvious is on glide, where top speed isn’t exactly scintillating. The speed bar is easy to use and gives around 11km/h extra over trim speed. The wing remains totally solid throughout the range. It was obviously at a disadvantage when pushing into wind compared to high-Bs I was flying alongside, but glide is totally usable. All up, this is a very capable wing that will take new pilots on some great adventures.

The A’s have a split riser to make big ears easy. When pulled the ears are relatively small, but combined with speed bar give a good sink rate and a good forward speed to escape the lift. As you would expect, they have to be held in, as they roll out the instant you release the pressure.

If acro is your motivation for getting into paragliding then the Birdy is probably not for you. In the manual they clearly state that it is not suitable for acro flying. It does, though, have a fun dynamic side. Wingovers are easy – you can get above the wing with good timing and brake control, and you will learn to control the wing properly.

Spirals are also easy to control, something I had to test for real when trying to descend in convergence. There was never any hint of a stable spiral (‘locking-in’) in the tests I did and it was easy to bleed the energy off. Here again the feel the wing gives lets you know what is going on. 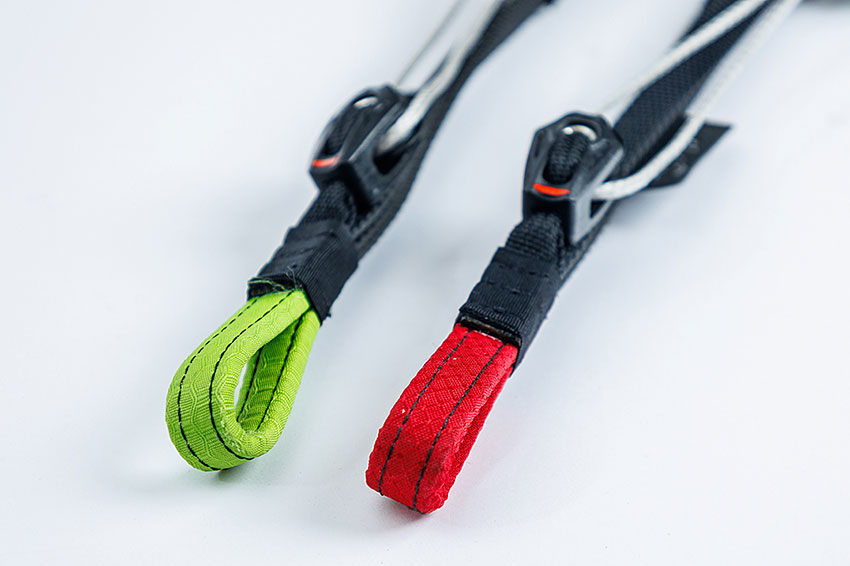 I so wish we’d had wings like this back when I started in the sport. To have this mix of safety and performance while at the same time having such good feel is a dream come true.

I agree with Supair’s Clément Latour that this would make a great choice as a first wing out of school. But it would also be a good wing for the many pilots who love to fly but, for whatever reason, only manage to fly a few hours each year.

It’s a wing that is cross-country capable, has the highest level of passive safety and enough feel to make it fun to fly and allow you to progress. I am left genuinely asking, do you need anything more?

Marcus flew the Birdy M (80-105kg) in the southern French Alps at around 100kg, paired with a Supair Altirando Lite reversible harness.