We reviewed the standard Spot X two-way satellite messenger in autumn 2019, but Spot have now released an updated version with Bluetooth. Lawrie Noctor took the opportunity to look again at how the Spot X truly performs against its main rival, the Garmin inReach. Specifically, how do the two compare when it comes to tracking?

The updated Spot X is physically the same weight and dimensions as the non-Bluetooth version, however, it now incorporates a Bluetooth chip. This means you can connect it to a smartphone using the Spot X App, available for both Android and iOS.

In terms of infrastructure behind the device (arguably one of the most important aspects), Spot uses a constellation of 24 low Earth orbit (LEO) satellites in conjunction with 24 ground stations, which act as a bridge between the satellites and ground units. Garmin inReach devices meanwhile use the Iridium satellite network, which is made up of 66 LEO satellites.

Coverage-wise, the Spot X Bluetooth covers most of the USA, South America, Europe, Australia, Southern Africa and China, but there are large gaps in India, Pakistan and the Middle East where coverage is restricted to SOS and one-way message cover. The inReach promises “100% global” coverage by the Iridium satellite network.

Spot say that the advantage of using ground stations and 24 LEO satellites is that it’s easier to update the system with changing user needs.

Ergonomically the Spot X Bluetooth is nice to hold and doesn’t feel big or cumbersome. It weighs the same as the inReach Explorer at around 190g but is slightly wider and flatter.

To turn on, there is a small button recessed into a protective shroud at the top right. It’s not very tactile, so if for some reason you were not looking at the screen it might not be immediately obvious that you’ve turned it on. There is also no audible confirmation like there is on the inReach.

Once on, the menus are fairly easy to navigate using the main selection control and OK/Confirm button in the middle. Unlike the inReach, the Spot has a full Qwerty keyboard, which I like as this gives it more autonomy than the inReach if you don’t have your phone with you. Typing custom messages is far faster and easier than it is on the inReach because of this.

There are two separate Back and Start/Stop tracking buttons. Like the On/Off button these require a little more precision as they do not have much travel or a clear “click” when pressed. The SOS button is a two-stage process, with a small door that needs a good firm click to open before being able to press the button.

With both inReach and Spot X you can use their web-based software to do things like update emergency details, add/remove contacts, enter social media details and edit predefined messages. Spot X also has a dedicated app. This has all the basic functionality you would want: send messages using your mobile phone; check in; SOS; and change settings.

One thing that did frustrate me however about the Spot X was you can only map 25 track-points at a time. If you are using a quick track interval, or going on a long journey, it’s impossible to display that entire trip on the map; it has to be done separately, in parts.

Also, when shown on the map the track-points don’t have a line joining subsequent track points, so the direction of travel isn’t as clear as it is on the Garmin inReach website. However, the track-points are numbered, so when you click on one it shows basic information like time, latitude/longitude and type of tracking service. For some reason when testing the Spot X not a single point registered an altitude, whereas the inReach registered lat/long, speed, altitude and time for every track-point.

Bluetooth connectivity could be a big advantage in some situations, where you want to use your phone to send and receive messages through the Spot X. I tried connecting both an iPhone and Android phone and had a few issues at times. Looking at the reviews in the app stores it looked like others have had similar problems, so a software/firmware update might be required for faster hassle-free pairing and connecting. 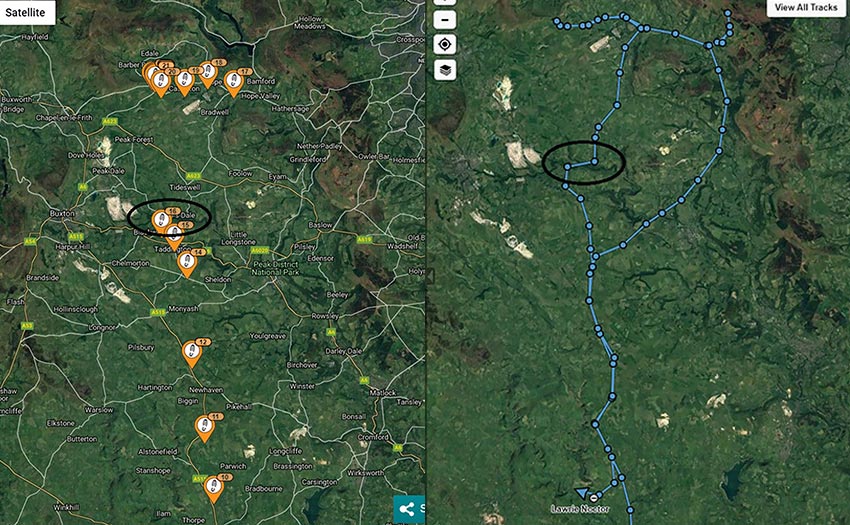 We tested the tracking extensively and compared Spot (left) with InReach (right). The InReach worked flawlessly, with all the data points regularly recorded and uploaded in the website. the Spot X Bluetooth however needed clear line of sight, with the aerial pointing up, to track accurately. On a ski day in Chamonix only one in three track-points were uploaded. And in this example the Spot X Bluetooth track was lost when going through a deep valley. Photo: Lawrie Noctor

I tested the Spot X during winter, when the weather was no good for flying XC. So to test the tracking I took the Spot X skiing in the French Alps and hiking in the hills. The times you are going to need the device to work will probably be in more tricky conditions and most likely on the ground, so I felt this was a fair test.

On first test, turning on both units at the same time, with them sitting on a window about 30cm apart from each other, the inReach locked onto a satellite signal within 30 seconds. The Spot took significantly longer, up to five minutes, and seemed to lose it intermittently.

After talking to the team at Spot, they told me that the Spot X Bluetooth needs to be outside, with perfect line-of-sight to sky and antenna facing vertically up. Taking the Spot X Bluetooth outside did show a good improvement to the time it took to lock on to satellites – about two minutes.

It is worth knowing that if you move any satellite device a significant amount while turned off (to a different country for example) or just have it turned off for a long period of time (90 days or longer) you will need to leave it for 15-30 minutes. This is because it has to download full almanac/ephemeris data: this is data all satellites transmit, which includes state of entire constellation, position and course data of each satellite. Once it has this it can tell the device the best satellites to use and quickly find its position.

For the first week of testing in Chamonix (and throughout the testing), the Spot X Bluetooth was given clear line-of-sight to the sky with the antenna facing vertically.

However, while skiing in Chamonix the Spot X Bluetooth only reported one-third of its track-points. To put that in perspective, during two hours of skiing there should have been 48 track-points sent to web servers for your friends and family to track you. However, only 16 or 17 were sent. If the antenna position wasn’t absolutely perfect then it would miss track-points.

Meanwhile, the inReach could be positioned in worse locations and still get reliable tracking – 100% of the inReach track-points were uploaded.

After the week in the Alps I contacted Spot to check if there could be a possible issue with this particular unit. However, they assured me that with the number of track-points sent it was unlikely there was an antenna issue, and reiterated that the device must be outside and with a clear, unobstructed view to the sky.

Bringing the unit back to my home turf in the UK I thought I’d take it hiking in the Peak District. On the way in the car I purposely placed the Spot X Bluetooth in a good position, at the front of the car with the antenna upwards; meanwhile I put the inReach lying down on the central console.

Once again, the Spot X Bluetooth still lost track-points on the car journey. When going through a deep valley it completely lost connection and took 15 minutes to reacquire satellites. The inReach however tracked throughout the same period. Once out of the car and attached to the side of my backpack, the tracking on the Spot X Bluetooth worked absolutely fine. 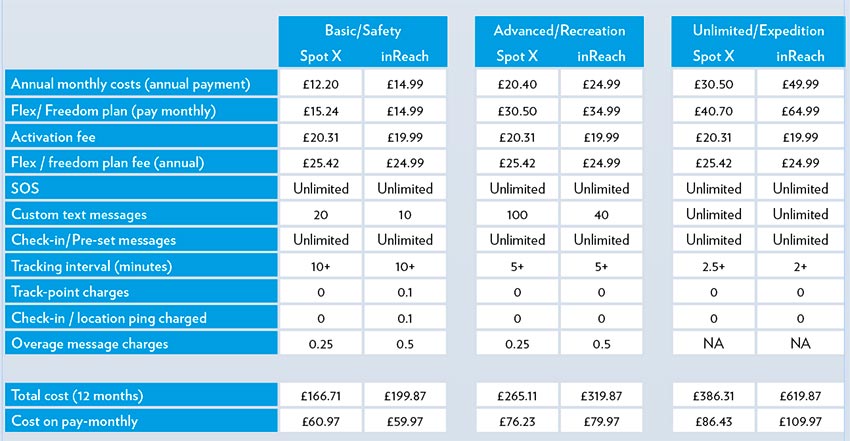 Satellite tracking isn’t cheap – until you need it, when it becomes the best money you’ve ever spent

Activation fee: Both the inReach and the Spot X Bluetooth have a one-off activation fee of about £20

Subscription plans: Both devices have several tiers of subscription plans, from light use to expedition. The Spot X Bluetooth annual plans offer better value for money than the equivalent inReach plans, being around 17% cheaper for the Basic and Advanced plan and around 38% cheaper on the highest tracking-interval plan. There is less of a difference on the monthly (Flex) plan with, on average, only 6% price difference in Spot X’s favour. If you want a rolling monthly plan then there is a further annual fee of around £25.

Sweet spot: The sweet spot in terms of value and offering is in the middle tier as you get unlimited check-ins, five-minute tracking intervals and 100 custom messages, which should cover most situations.

Annual or monthly? Annual plans offer better monthly value but can be a waste if you only use it three months a year. On the Spot X Bluetooth a three-month plan would cost you £137.23 for your first year or £45.74 a month (factoring in activation fee and annual flex plan fee). The equivalent inReach plan would cost £149.95 or £49.98 per month. Prices are quoted here in UK pounds sterling for easy comparison but will vary by country.

Overall, I’m a little disappointed with the Spot X Bluetooth. It looks like it should be a great device and, although it has more attractive subscription plans, the inconsistent tracking in harder locations means I wouldn’t be confident taking it on tough adventures or into the boonies.

Spot themselves admit that the Spot X Bluetooth is, “not reliable at the bottom of a deep canyon, in a cave, in an abyss or in very dense woods” and they are very clear that the antenna needs line-of-sight.

And although I completely understand this, the inReach undeniably outperformed the Spot X in the trickier scenarios – which is exactly where users are going to want and need it to work.

In short, if you are confident you will always clip it on with a clear view to the sky, and not let it get buried in the folds of a harness or backpack, then the Spot X has attractive pricing plans and is a good unit.

But if you are heading into the unknown, the wild, and need reliable tracking on foot and in the sky in potentially difficult situations, then your best bet is to reach for the inReach.