The Spot Gen 4 is compact and in a more sober black case, with just a strip of orange. GPSBip is for scale. Photo: Marcus King
Reviews, Technology

Does the latest generation of the classic satellite tracker hit its mark? Marcus King finds out

The Spot Gen 4 is an evolution of the original Spot satellite tracker rather than a whole new device. It retains the same functionality as the original, with tracking and simple fixed messaging in a compact unit.

The refresh brings the styling in line with the Spot X Messenger. Unlike previous models this version is a more sober black colour, with just a strip of orange harking back to previous models. 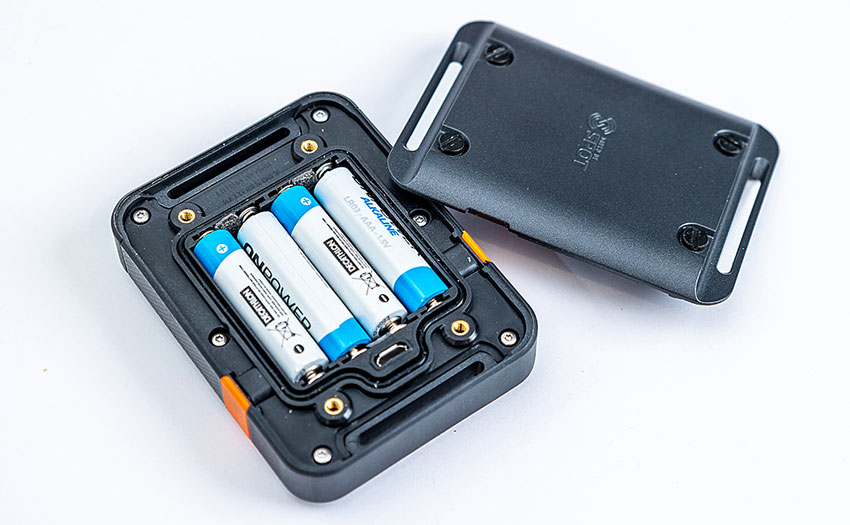 The unit is still powered by AAA batteries

The latest incarnation is smaller and slightly squarer than earlier versions and weighs 142g including batteries. Yes, batteries not battery. Because, like earlier models, this version still uses AAA batteries. They are accessed by undoing four screws, so not super easy to change.

Spot say you can send 1,250 messages on a single set, but don’t forget each tracking point (sent every 2.5 to 60 minutes) is a message, so you can burn through them reasonably quickly. It does feel unusual these days not to have a rechargeable battery, but the upside is spares are cheap and light.

Inside the battery compartment is a micro-USB port, used to update the settings and firmware. A reason for those fiddly screws is that when sealed properly the unit has IP68 rating, meaning it can be submerged in 1.5m water for 30 minutes. Overall, it feels rugged and should stand up well to everyday use.

The SOS emergency button is under a cover, to prevent accidental firing. Photo: MK

Besides the power button there are five further buttons. Four are for sending messages. There are Report-in, Custom and Help buttons that can be used to send a predefined message to your set contacts. These are set up easily on the Spot website.

In our tests messages came through quickly and reliably. The Basic plan now has unlimited messaging (for email and SMS contacts). An LED lights up when a message is being sent.

The final button is the Tracking button. Used to turn tracking on and off its operation is indicated by a dedicated LED. The Basic plan allows unlimited tracking with your position sent every five, ten, 30 or 60 minutes. An optional Extreme Tracking plan allows position updates to be sent every 2.5 minutes. Tracking frequency can only be set via a computer. 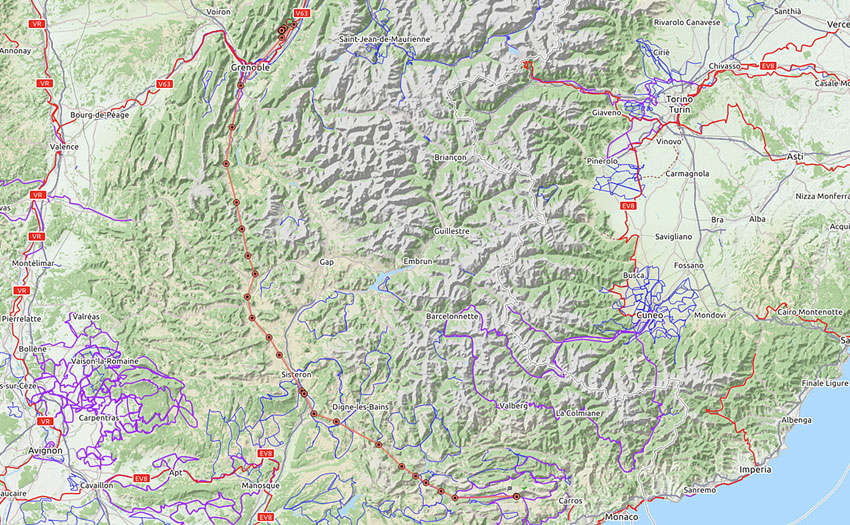 My first test was with the unit hung from the rear-view mirror of the car as we drove south from St Hilaire. I didn’t expect the best results as Spot recommend placing the unit flat with the logo facing the sky.

However, the results proved to be better than expected. With ten-minute tracking I would expect 31 points to be recorded during the five-hour 20-minute drive. The system recorded 28 points, meaning just three were lost, around 10%.

This seems to be an improvement on the tracking with the Spot X we previously tested. I asked Spot about this and they said that the devices have similar electronics but the antennae of the Gen 4 is mounted at 45 degrees, making it more tolerant of positioning.

I also tested the Gen 4 in flight. The biggest issue is finding somewhere to mount it so it faces the sky. Spot advise you not to mount it near other GPS units, so I chose to shoulder mount it, even though this meant it wasn’t facing the sky perfectly.

I switched to the shortest tracking interval of 2.5 minutes and flew XC for around three and a half hours, so it should have created 86 tracking points. In fact, only 49 points were recorded, meaning 43% were lost. The unit will make multiple attempts to send each position, but I am guessing with the less-than-ideal positioning and higher tracking-rate the unit failed to send some before two and half minutes were up. 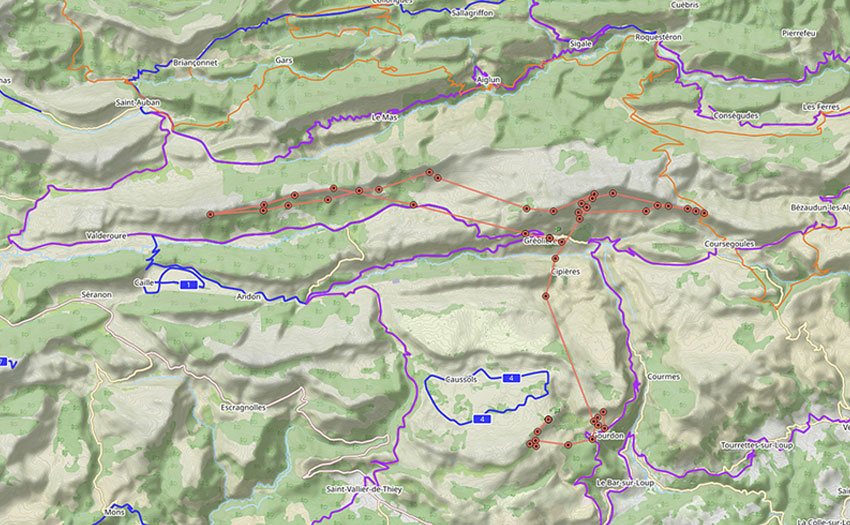 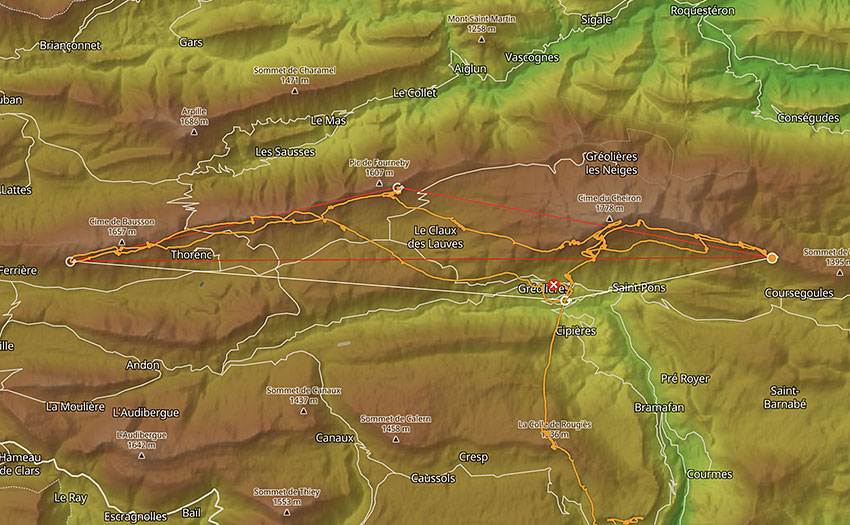 And the XContest track from the same flight for comparison

In terms of service cost, the Basic plan now includes unlimited messaging and tracking down to five-minute intervals for €11.95 a month on a 12-month contract. This compares with Garmin inReach’s Base plan of €14.99 a month, which then charges for each tracking point;  you need to spend €29.99 a month to get unlimited tracking. More expensive yes, but remember though that the inReach devices have two-way messaging, which can be priceless.

The 2.5 minute Extreme Tracking costs an extra €4.95 a month. There are also flex options that cost more but allow you to disconnect your device, saving you money if you don’t fly for a few months.

Spot network coverage hasn’t been massively updated in the last few years: it still doesn’t cover central Africa and southern India but most main flying areas are now covered, although it is not as extensive as inReach’s network.

The Spot Gen 4 is very much an evolution with no new functionality added for the latest version. It’s pretty much a switch-on-and-forget unit. In my tests it did seem more reliable than previous units, including the Spot X.

However, there were still quite a few missing trackpoints when using the Extreme Tracking option and I wonder if this is really worth the extra ongoing costs. It’s probably best to use with the Basic plan on five-minute tracking as a backup to the mobile-data tracking that many pilots use.

If you are heading off on a full-on expedition to a remote area inReach is still the ultimate solution, but you will pay nearly three times more per month for unlimited tracking, with half the frequency of updates. Otherwise, Spot provides attractive pricing and, as long as you mount it with a view of the sky, works well.