Skywalk have developed quite a reputation when it comes to lightweight, vol-biv wings. Top of their range is the X-Alps 3, a glider created for last year’s Red Bull X-Alps, in which they are a major partner. Below that they have another five wings including the Cumeo, the light version of their high-B Chili4.

Steve Ham reviewed the full-fat Chili back in May 2016 and found a wing with “much of the latest technology” with “dollops of” performance, “short brake travel” and “direct response” that he liked. The lightweight Cumeo promised a lighter package for carrying up the hill and the easy handling of lightweight wings, both of which are attractive to many pilots.

The glider arrived just as the weather here in the south of France was going through one of those periods when it couldn’t make up its mind between winter and spring. Flights were snatched on sunny days between snow and wind, giving good strong thermals, sometimes being blown apart by the stronger than normal winds. 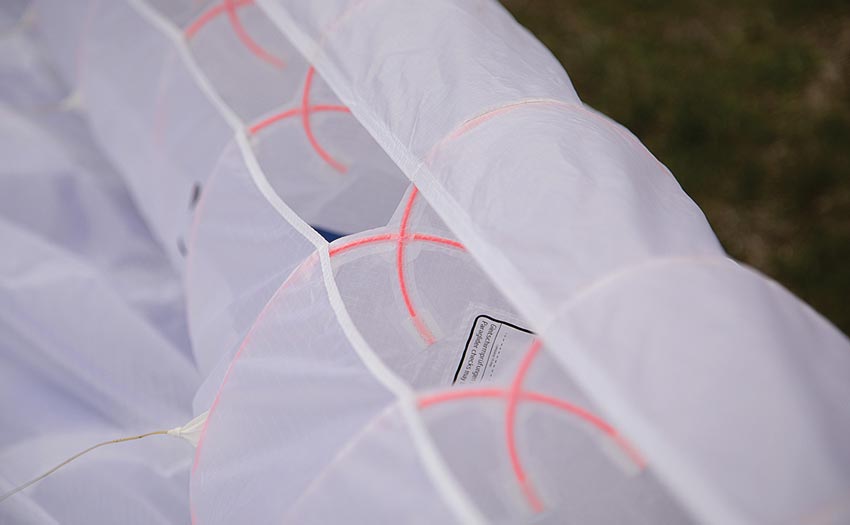 The most noticeable construction details are the nylon wires, mainly because they are bright pink and there are quite a few of them. There are two wires on the leading edge plus C -wires sewn in over the C-line attachment points to distribute the load. Some of these wires are quite long and if you pack the wing tightly, as you are likely to do if going vol-biv, it is easy to bend them.

Luckily Skywalk say that the rods will stand up to a lot of abuse and can be happily bent around a 1cm radius, although they do recommend you lay the rigifoils on top of each other. Skywalk’s Gerhard Holzner said he had, “never seen that a customer has broken one of these rods.” The wing is also supplied with a compression bag to help you reduce the packing size; when used the glider is impressively small. 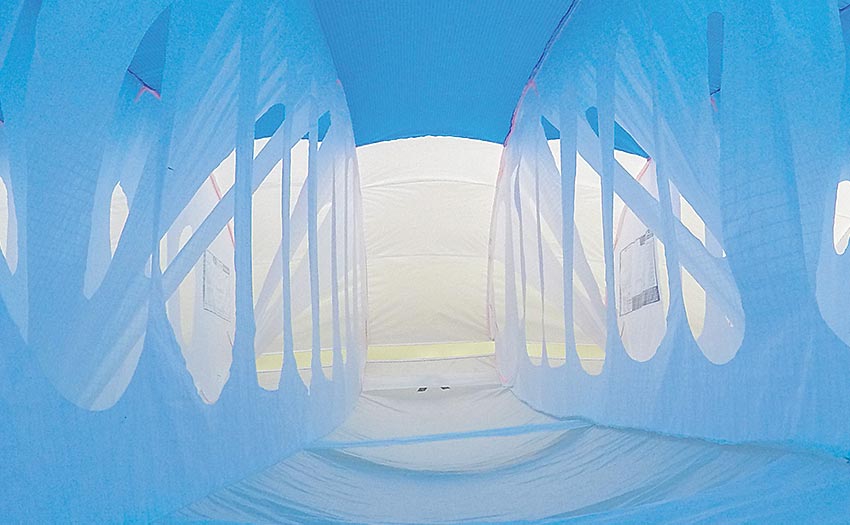 Skywalk haven’t been too radical with the glider cloth used: the top surface is a mix of Porcher Skytex 32 and 38 g/m²; the bottom surface is made from the super light 27g/m² material. This should help the wing stand up to general use, and Skywalk offer a four-year guarantee provided a check is done after two years.

As well as mini-ribs on the trailing edge you will also find the company’s trademark Jet Flaps, which vent air through from the bottom surface to the top surface. This is said to reduce the stall speed and give better low-speed handling. The company also claim it helps improve the climbing performance of the wing.

The line-set is highly optimised with some very thin lines being used in places where there isn’t so much load. This is a true three-liner with no D-attachments. The lines are mainly unsheathed with only the centre mainlines sheathed. I did find that the lines could tangle a bit on launch and some care had to be taken when preparing the wing, but had no problems with this in the air.

The risers are sleek and well finished, made from 12mm Dyneema webbing. They have split A-risers which are colour-coded red. The brake handles are quite big and have a nice bit of padded neoprene. The handles are attached to the risers with a popper and the brake lines run through ceramic rings rather than pulleys. Only the lower brake line is sheathed and felt pretty thin to me. 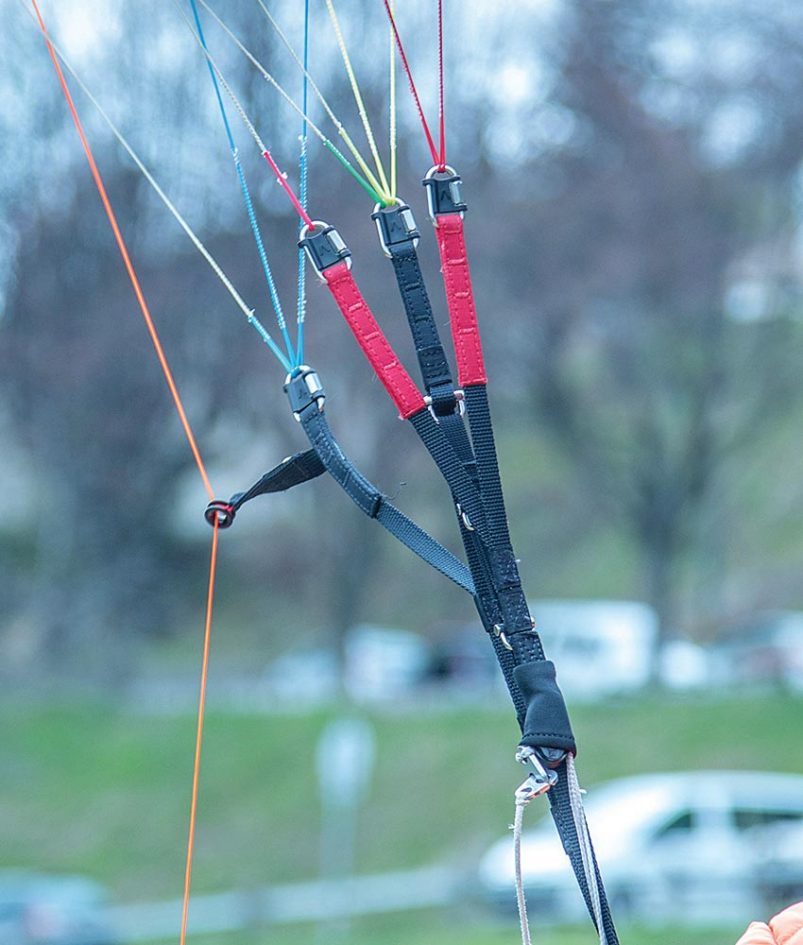 As you would expect these days this wing is pretty easy to launch. It can be a bit slow rising up the first 45 or so degrees, but in stronger winds I found I was able to get it to rise quickly with just A-riser pressure. As it comes overhead it needs very little braking to stop it. I found that if brake was applied before it was properly overhead it could fall back easily. Once overhead though you can feel the wing wants to fly.

The short, light brake-travel and the agility of the Cumeo is immediately noticeable in the air. The handling of the wing is a real delight, the brakes give an immediate reaction from the wing and it turns very easily and precisely. It was almost a bit of a shock coming from some of the lower-level wings I have flown recently; it is certainly a wing experienced pilots will appreciate. I felt most of the control was in the brakes rather than weightshift, but I fly a hammock style Impress harness from Advance, so a harness with a seatboard would give more authority if you favour weightshifting.

The downside of this is the stall and spin points are higher than some other wings, but there are no surprises. Brake pressure ramps up nicely as you get near the stall and too much brake on one side will see the wing gently peeling back; coming back instantly once you release. You also have good authority over the wing when you land in strong winds.

Once in, the wing feels efficient surfing the bumps well. The short brake travel means you can precisely position the wing in the thermal making the most of the lift. Flying amongst other Bs and Cs I found the Cumeo’s climbing performance flattered my flying skills. 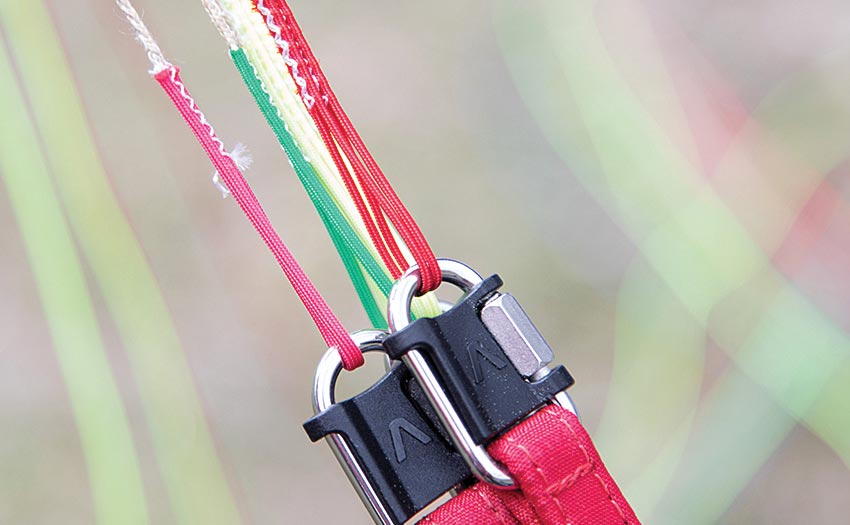 Setting off on glide the bar is easy to use although I had to use the full reach of my setup to get the pulleys touching. I measured the increase in speed as around 12km/h, flying a couple of kilos below the top weight on the small. Measured with the Flymaster TAS I got a trim speed of 37km/h and full bar-speed of 49km/h. The wing feels nice and solid on the bar with no big pitching. A bit of control is possible on the rear risers but there is a risk of bending the profile. The glider has a nicely driven feel to it on glide, no doubt thanks to the sharknose and the well-tensioned leading edge.

Big ears are easy to pull using the split A-risers. As this pulls one of the three main lines down they aren’t as big as you will get from wings with fewer main lines, but they seemed effective and don’t thrash about. Combined with speedbar they give a useful descent rate as well as good forward speed to get you away from the lift. Once released the ears open quickly by themselves. 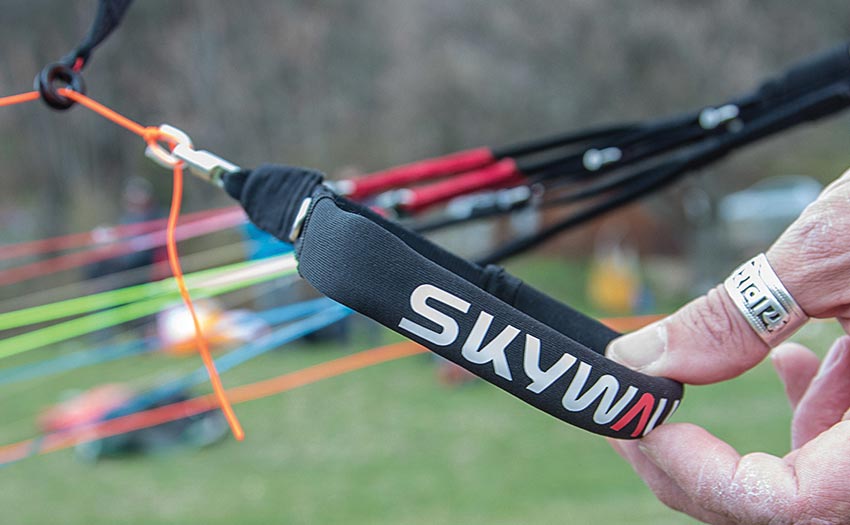 During my time with the wing we had some pretty strong spring conditions with quite a bit of wind, which led to a good amount of turbulence. The Cumeo coped well with these conditions and I had no more than a couple of small wingtip collapses when getting close to the edge of leeside thermals. These were only about 20% to 30% and re-inflated immediately with no change in direction of the wing. It feels like the nose is strong and well tensioned when climbing.

With its agile handling the wing will drop into tight 360s easily, which are easy to control easing in and out on the brakes. Wingovers are also easy to control. In summary it all feels very smooth. 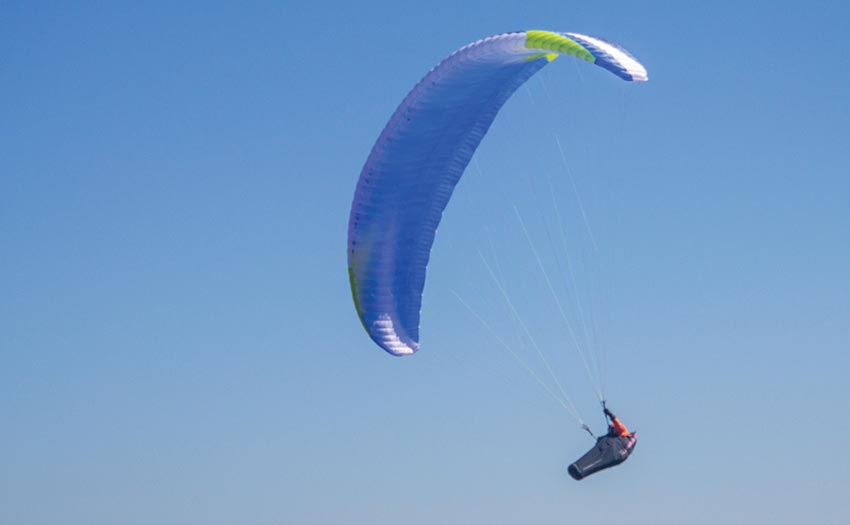 The glider belongs to a niche but popular class of wings that combine XC performance, security of the (high) B class and light materials – as at home on a standard launch as hiking into the hills. The overall package creates an an accessible all-rounder. Other wings in this ballpark include gliders like the Ozone Swift 4 and Nova Mentor 5 Light. Photo: Charlie King

This is a wing that combines agile handling and good feedback with top-B performance in a lightweight package. Paired with the company’s new X-Alps Range 2 harness it will undoubtedly make a great vol-biv setup for big adventures in the mountains with B-class security.

With its durable mix of materials and easy-to-handle risers it will also make a lightweight everyday and travel wing. The Cumeo is a wing that sits happily alongside the likes of the Mentor 5, Iota 2 and Rush 5 in terms of performance, and requires a similar level of pilot skill.

If you are a pilot who favours agility and good feedback then don’t look past it, give it a try. X-Alps here we come.

Marcus regularly reviews EN-B and EN-C wings. Cross Country’s designer, he has been flying paragliders for 25 years. He lives in the south of France near the sites of Gréolières and Gourdon where he flew the Cumeo S (85-105) with an Advance Impress 3 at an all-up weight of around 102kg.